First of several posts about my 2021 trip on the Wonderland Trail, this has the overview of the trail and some planning information.   Some links to things I found useful are included, if you want to pick up a map of the park, please use the links below, it will give me a few pennies to help pay for the site.

The Wonderland Trail is a 93 mile loop around Mt. Rainier, a dormant stratovolcano just a 2 hour drive from downtown Seattle.   It’s the centerpiece of Mt. Rainier National Park.  Trail access is via a permit system; you can’t just wander the trail if you plan to do overnights.   While most people enter a lottery for an itinerary, the National Park Service reserves a handful of permits for walk-ups.   Be advised; if you walk up, you’ll get whatever itinerary fits the existing campsites, and there aren’t many.   You might have a 20 mile day followed by a 4 mile day.  I was lucky enough to have scored a slot in the lottery in March.

Most people do it in about 9 days, and hike the trail clockwise.  I chose counterclockwise.  I’ve only done this once, but I think my direction and itinerary were perfect – I started high, at a good spot, did a 6 day stretch without a resupply so I could really enjoy being in the woods, tanked up 2/3 of the way through and did the best part on the last 2 days.   Most people start at Longmire and go clockwise – this means you start in a kind of sucky area, pass through the good stuff, then finish doing some roadwalking and near-road camping.   The Summerland and Glacier Basin areas where I spent the last 2 days were possibly the coolest section.

For me, hiking the trail was a “because its there” type of thing.  Once I heard of it, I had to do it.   The Caltopo map is here.   But buy a proper paper map.

Because you’re walking around a giant cone, and you’re travelling roughly around its circumference, you’d think that the trail itself would be level.  However, it’s anything but the sort.   When people say “Oh the Wonderland, that’s a lot of up and down”, they mean it.

This was the first hike for both my new pack, a SWD Longhaul 50, and my new tarp, a 6×9 silpoly ripstop job I got from a guy on the Internet who makes them.   I could have tried them out first, but I figured, go big or go home.   Given the summer season, and the fact that there’s a persistent ‘heat dome’ over Washington State, I left he traditional down jacket at home, along with my thermal pants.  In the end, I never even wore my thermal shirt.   With the new pack, the lightweight shelter, and minimal clothes, I was carrying about 13lbs dry to start.   Most hikers were in the 40lb range, and many commented on how small my pack was “for a Wonderland hiker”.   After much soul searching, I left the Chrome Dome umbrella home.  Other gear, most of which was from my PCT hike:

I mailed food ahead to the Longmire Village Wilderness Information Center; you can send or drop off food packages to this and several other points along the trail.   Lacking transportation, I did just one, which meant I was going to start from Sunrise with 6 days of food.   The proper address to mail packages is :

You’ll need to use UPS for Fedex.   The UPS computer will complain that this address isn’t legit, but it works.   Just have the person push it through.   Because the food cache storage isn’t refrigerated, I went with a package of tortillas, German-style vollkornbrot, and a grocery store cheese block.   Both survived, and the cheese was edible.   I also packed the traditional noodles, dehydrated black beans, nutritional yeast, granola, etc.

In the end I packed WAY too much food for the last few days, so I dumped a couple of pounds of it – extra torts, half the cheese block, and a few odds and ends.   Naturally I ran out of snacks, and forgot Fritos which was nearly a fatal mistake.   But since the Trail provides, that problem took care of itself.   More on that later.

Travel to Mt. Rainier National Park is tricky.   There’s no good way to get there without a car.  I managed to string together the following:

Enumclaw is a beat little ex-agricultural town, where I found the natives unfriendly to bearded guys walking around in backpacks.   One guy came out onto the sidewalk and challenged me, “What are you doing here, man?” and encouraged me to find a different area to walk around in because there was nothing for me there.

Getting home was easier – I had a friend from my PCT hike pick me up at Sunrise, we did a bit of hiking in the rain and camping, and then she drove me back to Seattle.

It’s basically 9 days, roughly 10 miles per day, with a few miles on either end for getting in and out.

After my journey to Enumclaw, the next morning I arrived at the White River entrance to get my actual permit.   Up until now I had merely a reservation.   After a chat with the Ranger, who assured me that I had a great itinerary, I had my real printed permit attached to my pack and I was off.    From the entrance its only a handful of miles, on the road, to White River Campground, where there’s a 2 mile uphill grind to the trailhead to my campsite.   There was a bit of a snafu with the permit name; they wanted my name, but I had already signed up on the NPS site as “Smokebeard”, so there I was, “Mr. Smokebeard Hiker”. 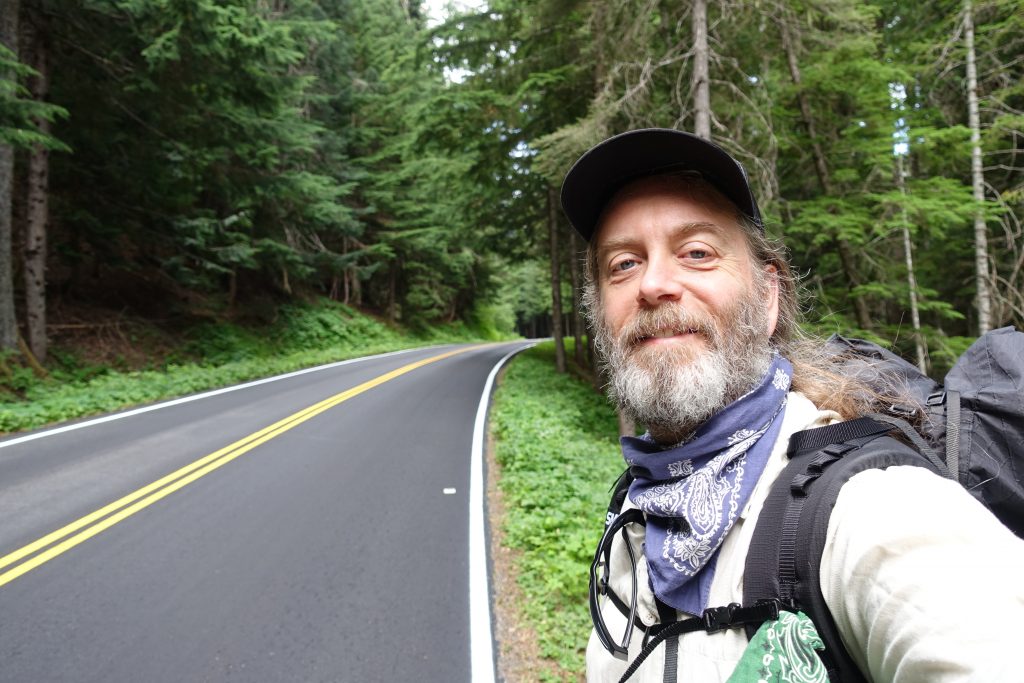 While it seemed somehow fitting to walk in all the way, I was on a road, so my hiker trash instincts took over.   Out went my thumb.   20 minutes later, a Porsche SUV pulled over and hitched me all the way up to Sunrise, a big visitor center area with a lot of day hiking, bathrooms, a snackbar (cash only), and amazing views.  At this point it wasn’t even noon and I had just over a mile to hike, so I bummed around and did some small loop hikes in the area. 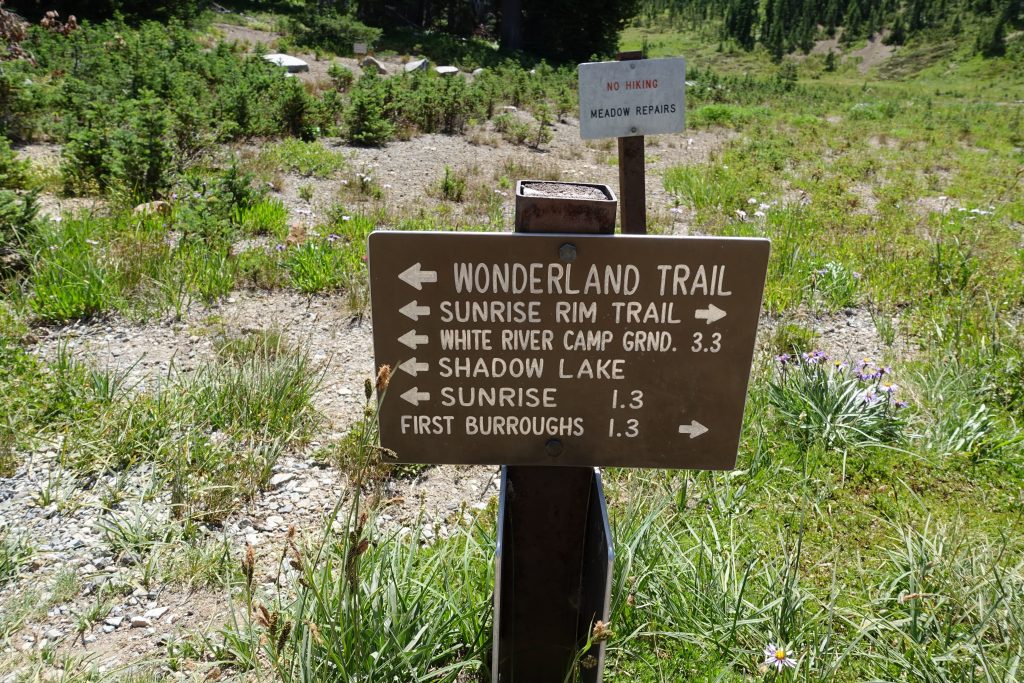 Mid-afternoon I got to Sunrise Camp, where I set up my sleeping pad and quilt cowboy-style.   There was no chance of rain, and the bugs, although bad, seemed manageable.   The day also felt like it would cool off, and the bugs would simmer down – which they did.   Sunrise was a busy place, with 7 sites and 2 group sites.   We had a full house that night, including a massive multi-family group at one of the big sites.  Sunrise also has a bear locker, so I didn’t have to mess with hanging my food on one of the rickety bear poles they provide at other places.   Even better, all the food I was carrying didn’t fit into my food bag.   I walked in on the well-groomed and pounded-out trails, doing ok despite the altitude, around 6000 feet. 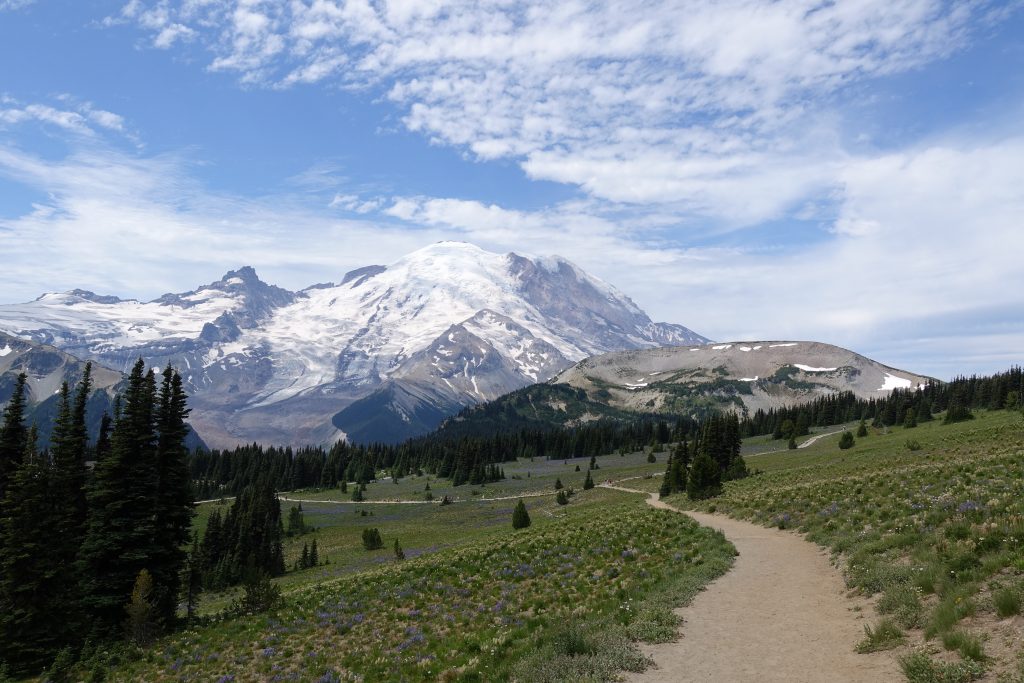 That night as it started to get dark, there was a big elk up on the ridge outside the campsite.  First he was a moving brown blob, then I realized we were looking at his butt; when he lifted his head and you saw the gigantic rack of horns it was another story.  I had a good chat with 3 guys also on the Wonderland, but going the opposite direction.

Sunrise Camp has a cool pond nearby, but because it’s also the water source, no swimming.   And it’s full of giant salamanders, like 6 inches long. 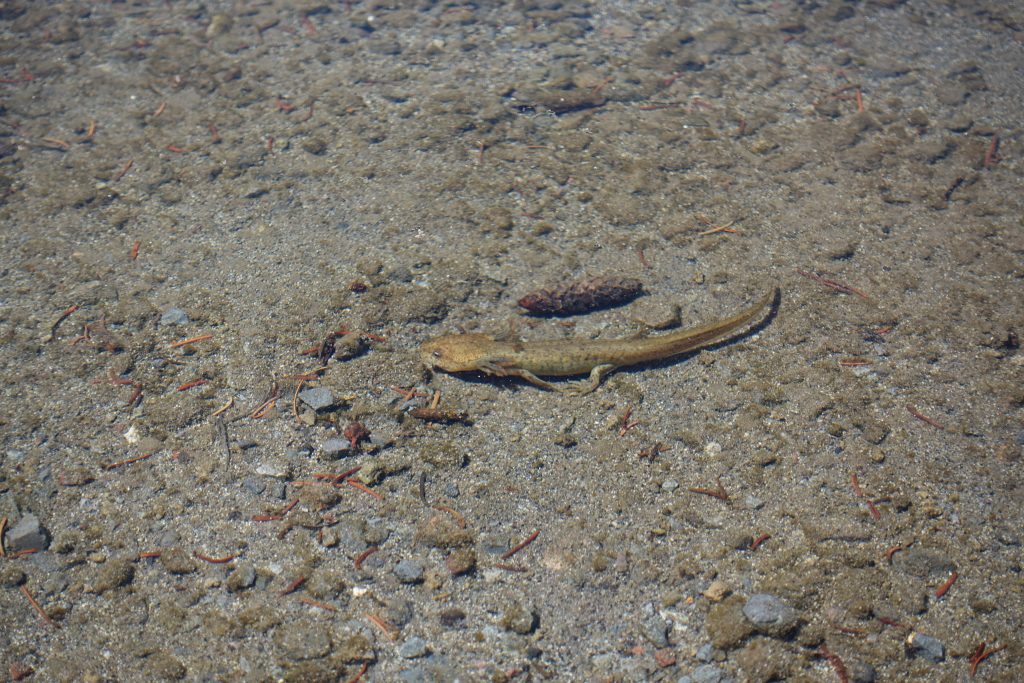 I survived the bugs, and in the morning began the first leg of the trip, a roughly 11 mile stretch to Mystic Lake Camp.   Despite the pack weight, there was still that fresh-out-of-town spring in my step, eager to tackle whatever was ahead. 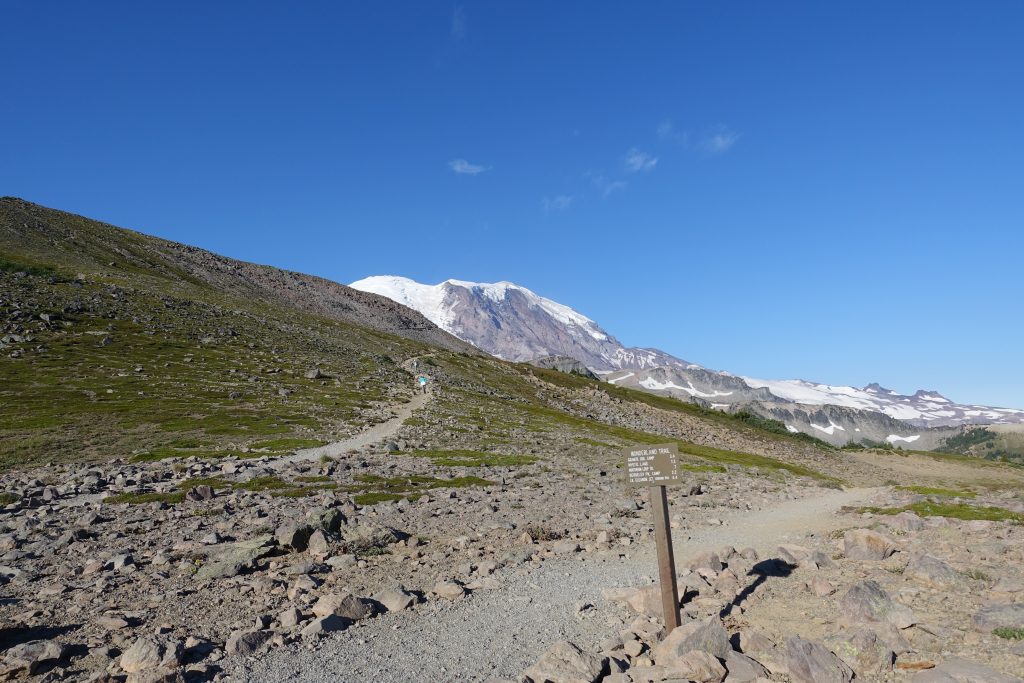