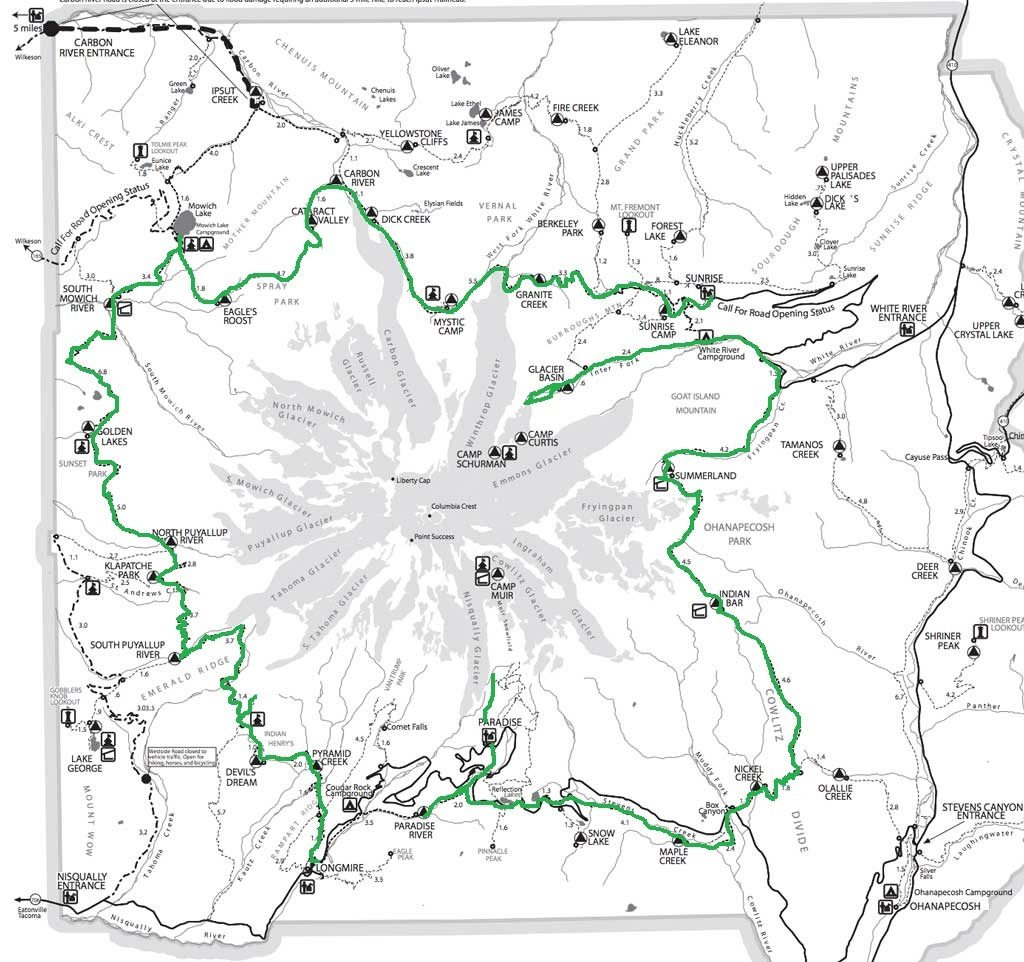 Woke up and puttered around, not wanting to leave.   Today was going to be super easy, almost all downhill or flat, with a bit of up at the end.   Finishing meant that I was done, and I wasn’t in any hurry for that to happen.   But, at 6800 feet, on a volcano, near glaciers, you can’t predict the weather.  There was no point dawdling.   I saddled up and got moving, pretty much just as it started to rain.   As I cleared out of my campsite I could hear the rain falling on the tent of the people next to me – the trespassers.   Trail Jesus was still watching over me.

I hate packing up in the rain.   I can hike in the rain all day, what I can’t do is pack up, dry, under cover that’s being rained on, then pack said cover, wet, and launch out into the wet.   The timing was perfect, like so much else on this trip. 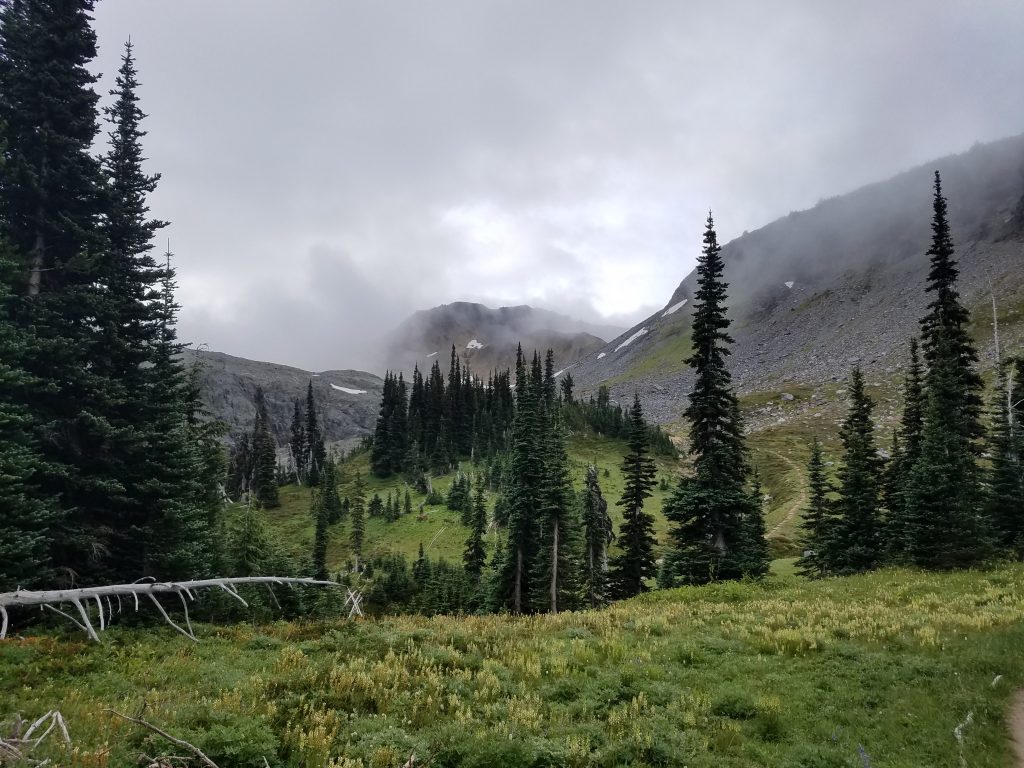 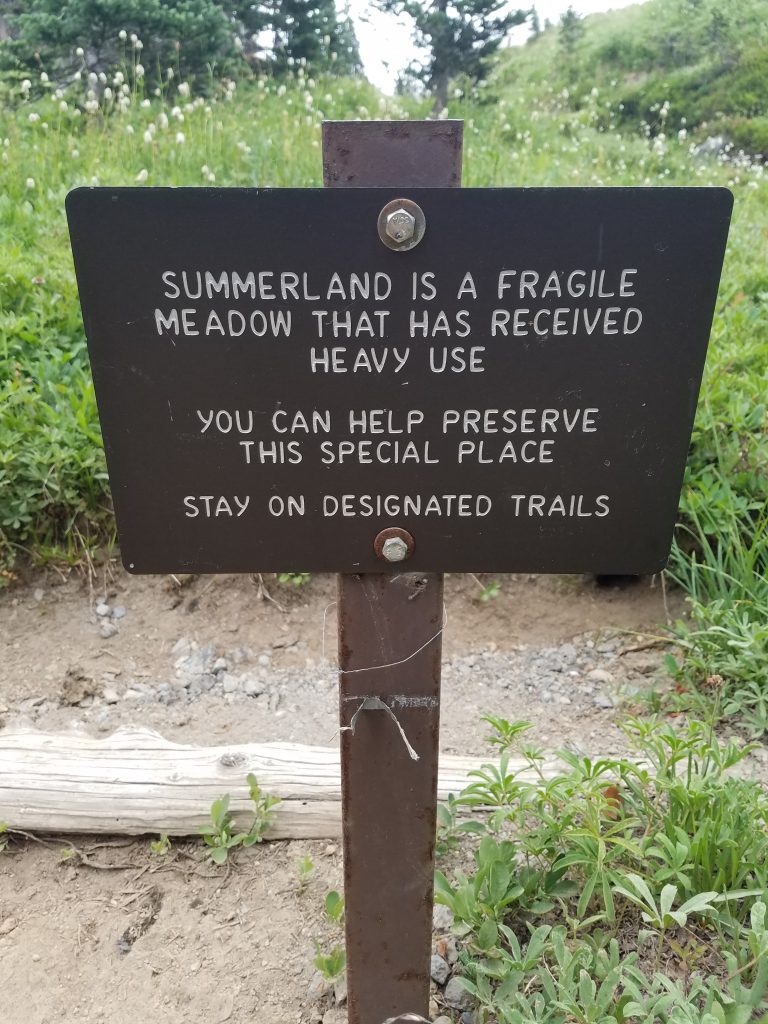 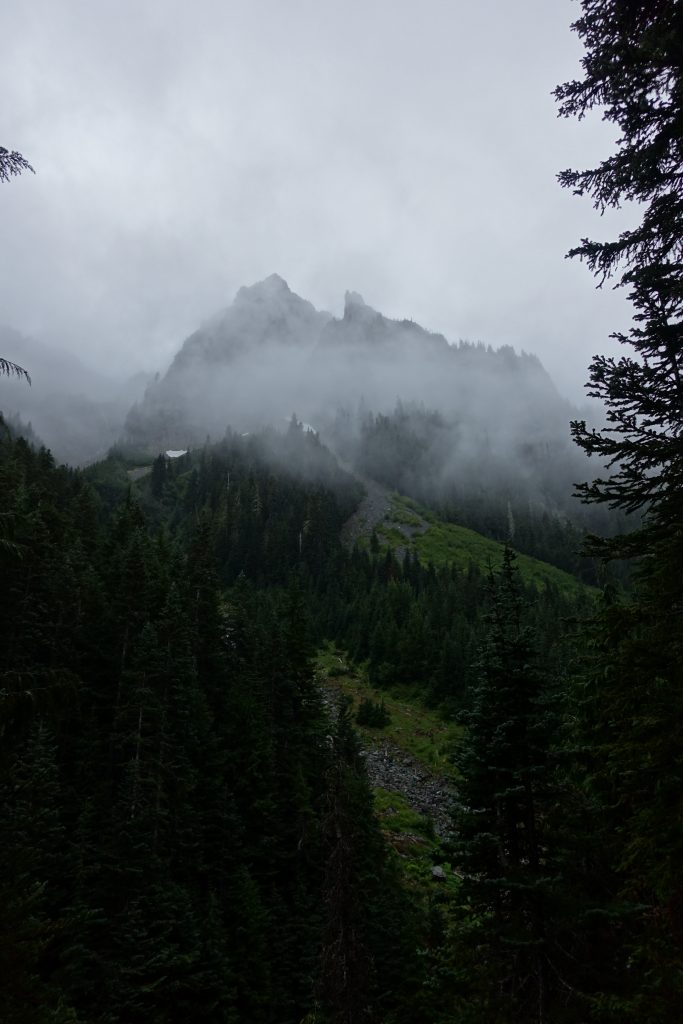 Summerland is hugely popular and only a handful of miles up from a big trailhead, so the trail was well -made and wide.   It was an easy, rainy stroll down, on many steps, and a few decent bridges.   I’m sure the Park was the same, but to me it had that sort of sad, last-day of school feel.   Or better, that empty-campus feel that colleges have in July. 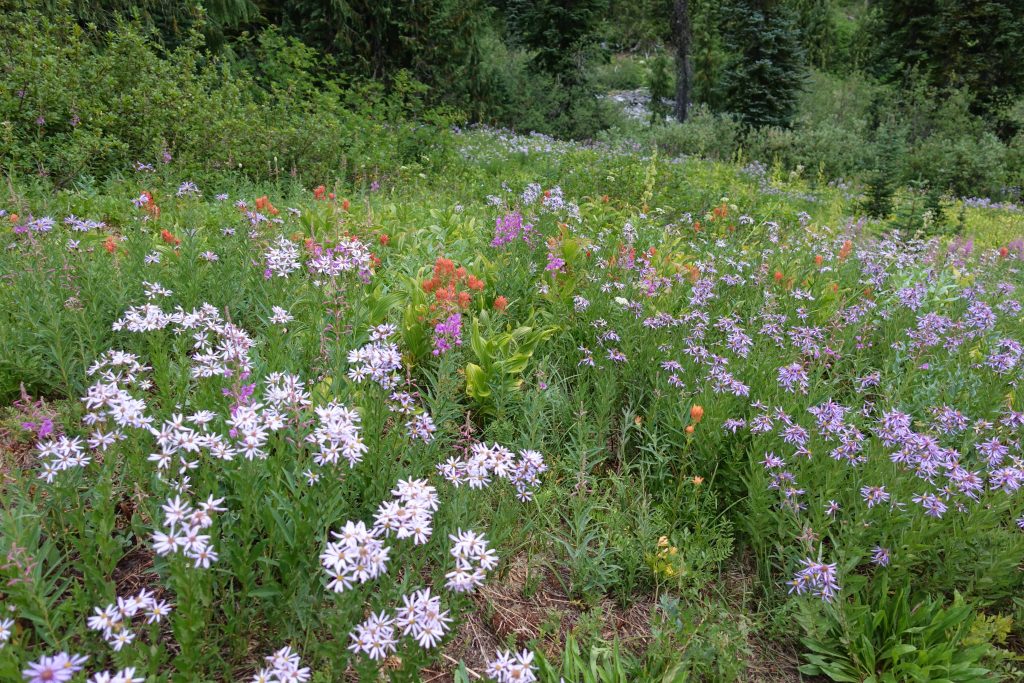 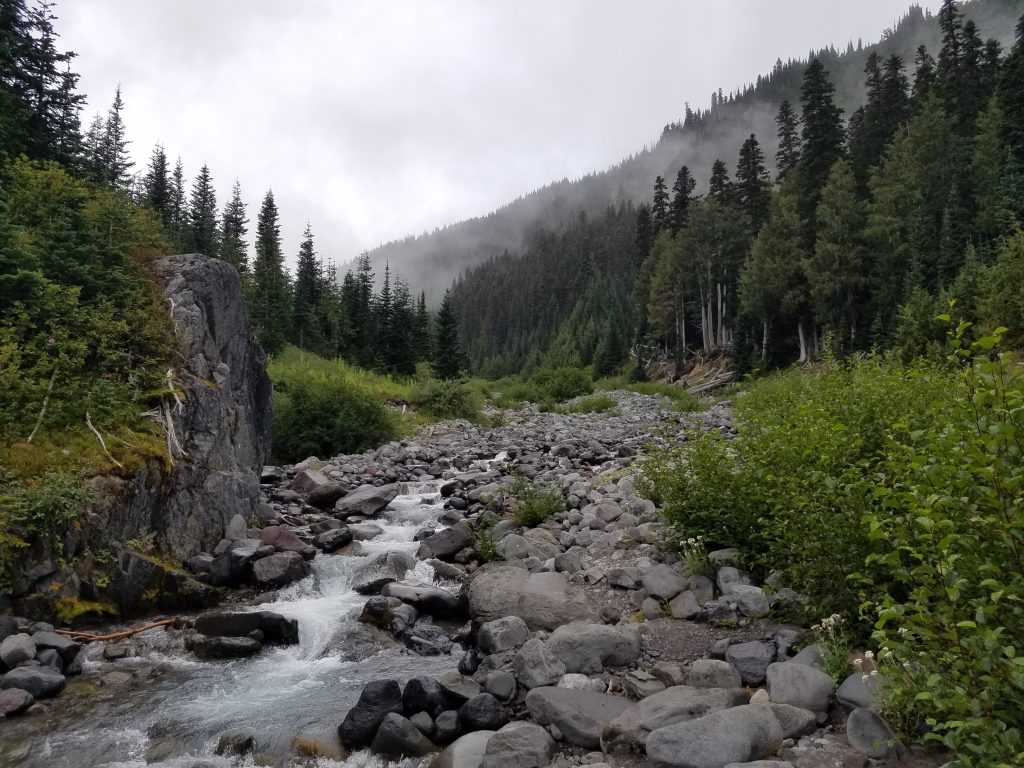 The sun rose and I descended, and before long things were much brighter, warmer and drier.   The trail went back down into the big pines, with some 5 footer old growth here and there.   And this very cool, very resilient tree.  Sure it got knocked over, but not quite – and it managed to keep going.

You can see in this picture just how nice the trail was. 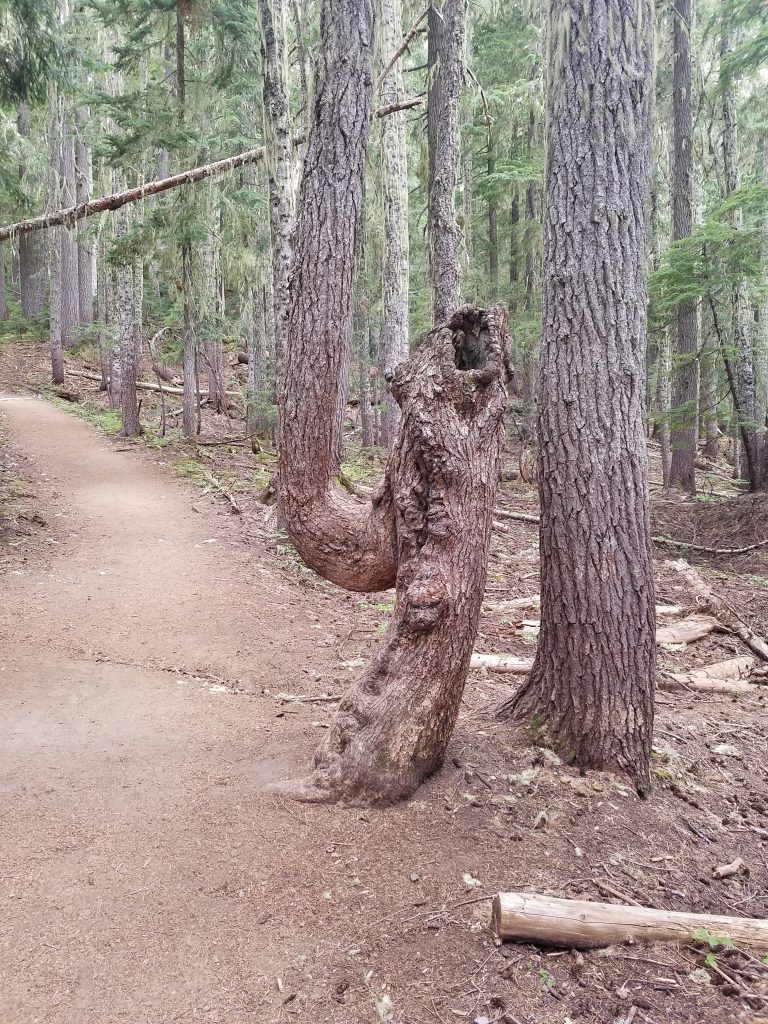 I started running into tons of people coming up, some wearing masks.   Oh right, COVID, I remembered.   It was weird to have almost 2 weeks off, not worrying about COVID.   Families too, I saw one group of about a dozen people a mile or so up.   Someone was carrying a small child, cleary tired.   That wasn’t going to end well, I thought.

I had heard on day 2 from someone that the bridge over the White River was out, and when I got near the road the NPS told me the same thing, so I dropped down to the road and did the roadwalk up to the White River Canyon road, and the 1+ mile roadwalk to the campground. 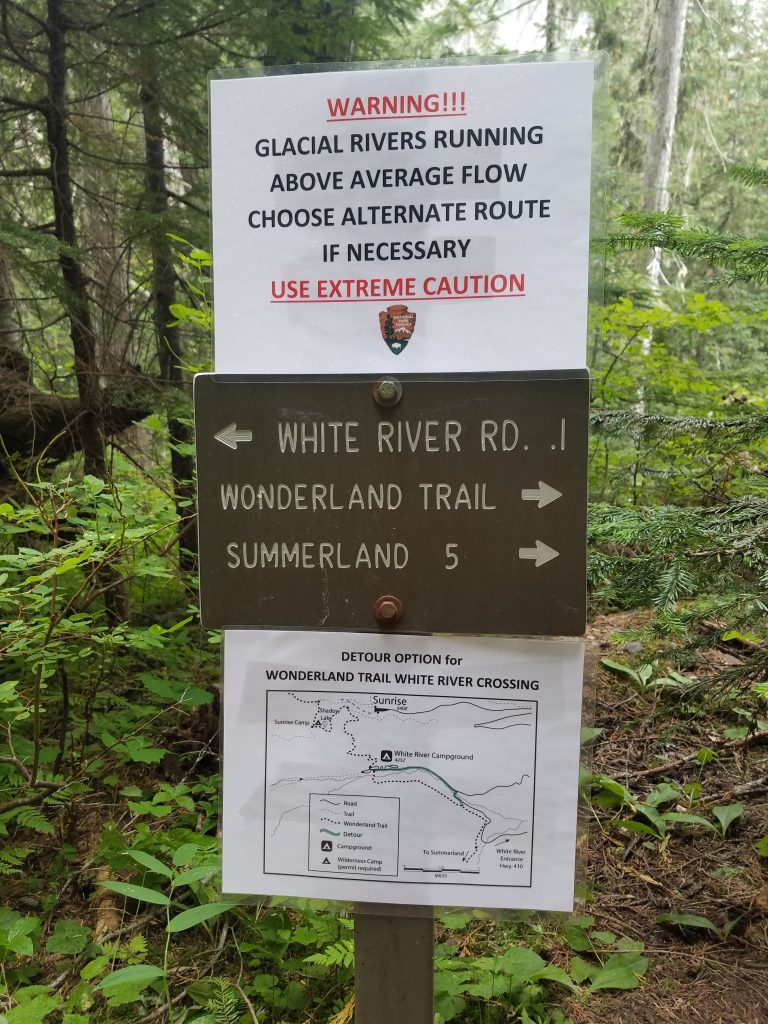 Here’s the Brown, I mean White River.  It looks like just some water running, like you’d have in a heavy rain on a road – but it was at least a few feet deep, ice cold, and really fast.   Not to be trifled with. 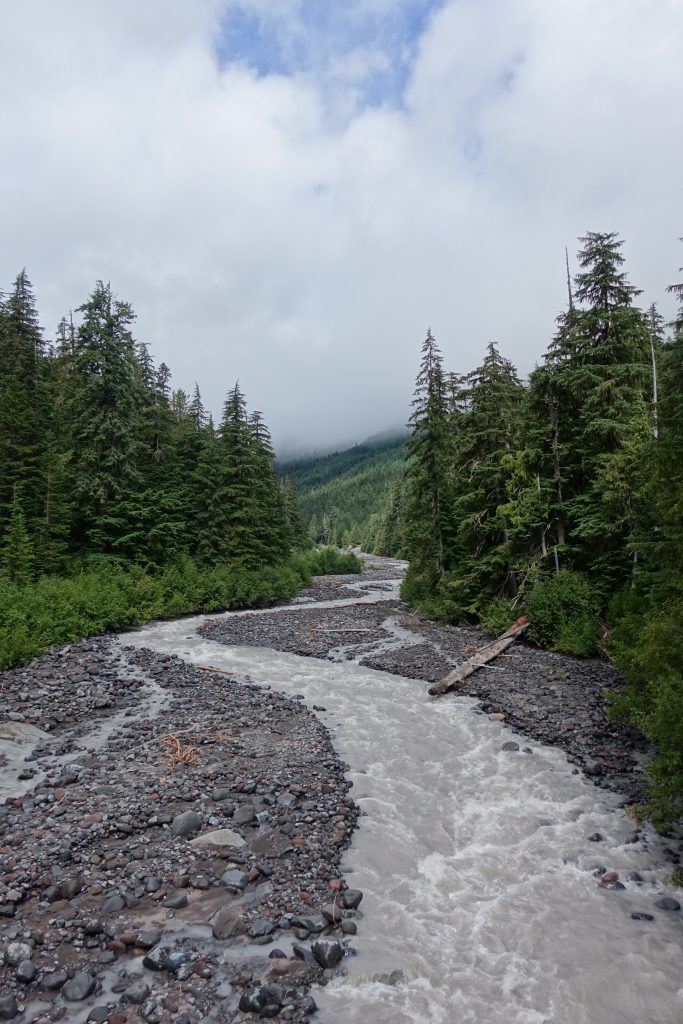 Grim, but I think more legalese at the big public campground. 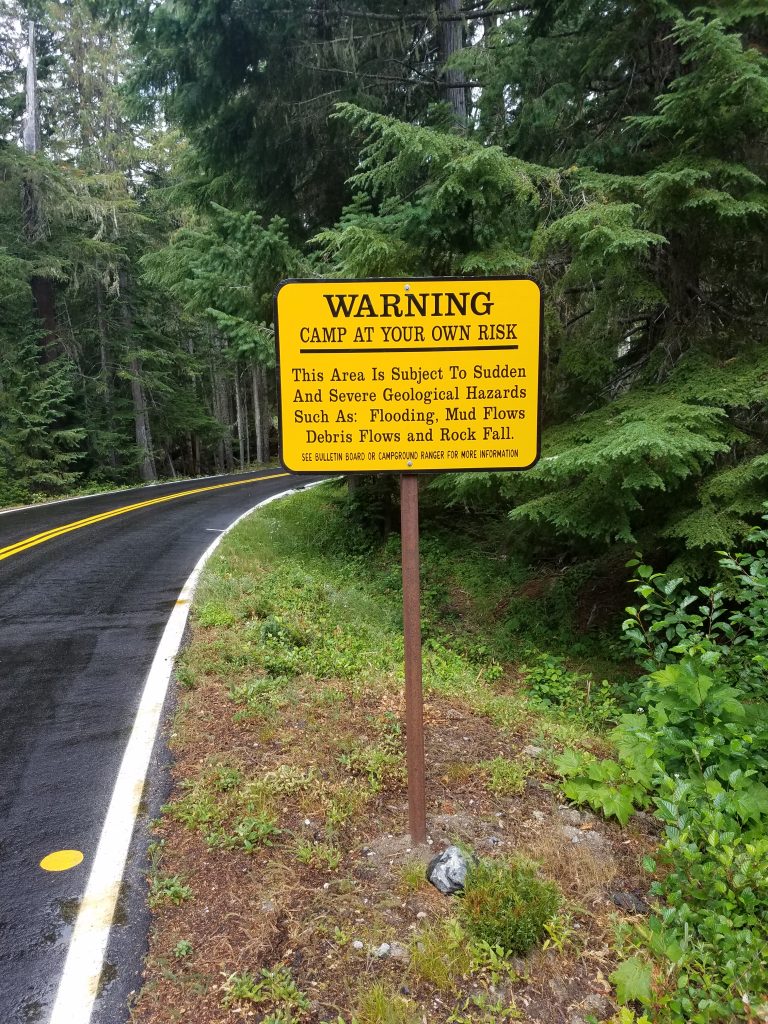 It was the least glamorous section of the hike.  The campground was culture shock.   RVs.   Kids on bikes.   I think I heard a generator.   Giant 8 man tents with built in flaps covering power cord attachment points – I suppose for your minifridge in your tent.   And tourists, and people from faraway lands.   Right, I thought, I was in a famous US National Park.   In the backcountry because there were so few people it was all Americans.   When there’s only 3 campsites and you’re 20 miles from the road, the likelihood that someone’s going to fly all the way here, then backpack in for a night, is essentially zero.

But there were bathrooms, and potable water fountains, and picnic tables, so I had a nice lunch.

And there was this.  I’m not sure what it’s for, or what the occasion was that it would be used.  I didn’t ask. 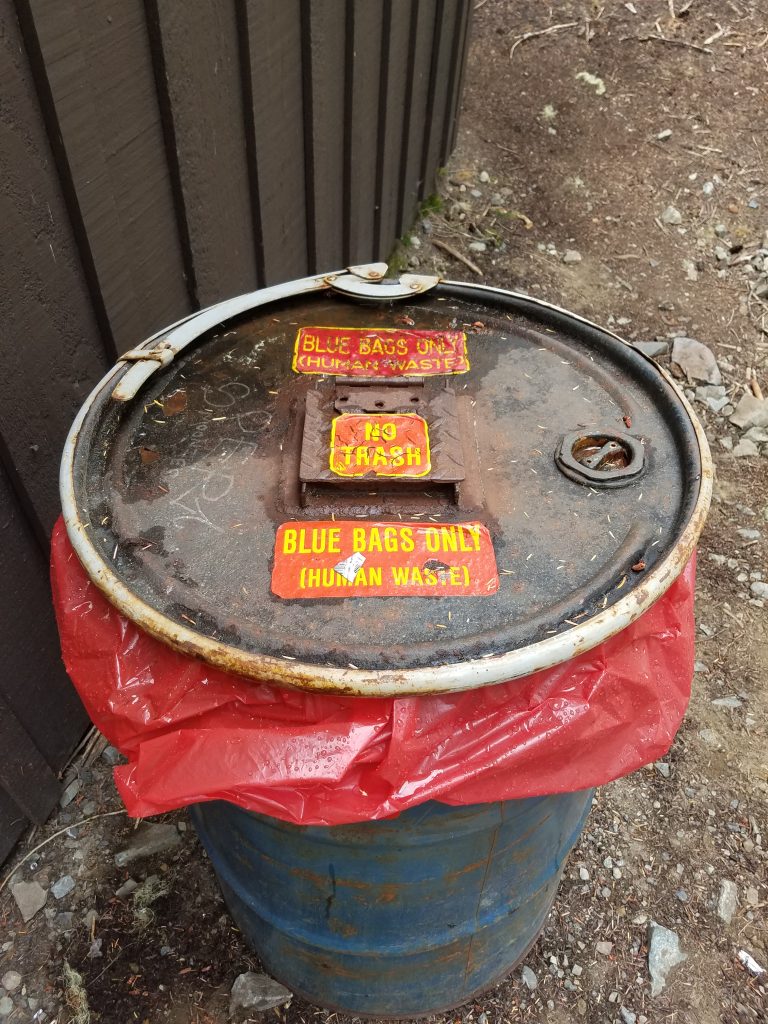 Eventually I got bored, so I moved on in the afternoon.   The trail up to Emmons Glacier is another hammered-down road, in fact, it WAS an old road.   Somewhere up there was an old copper mine back in the day, so the trail ran on the old road.   Plus 100s of people travelling it both cause and help it become a highway. 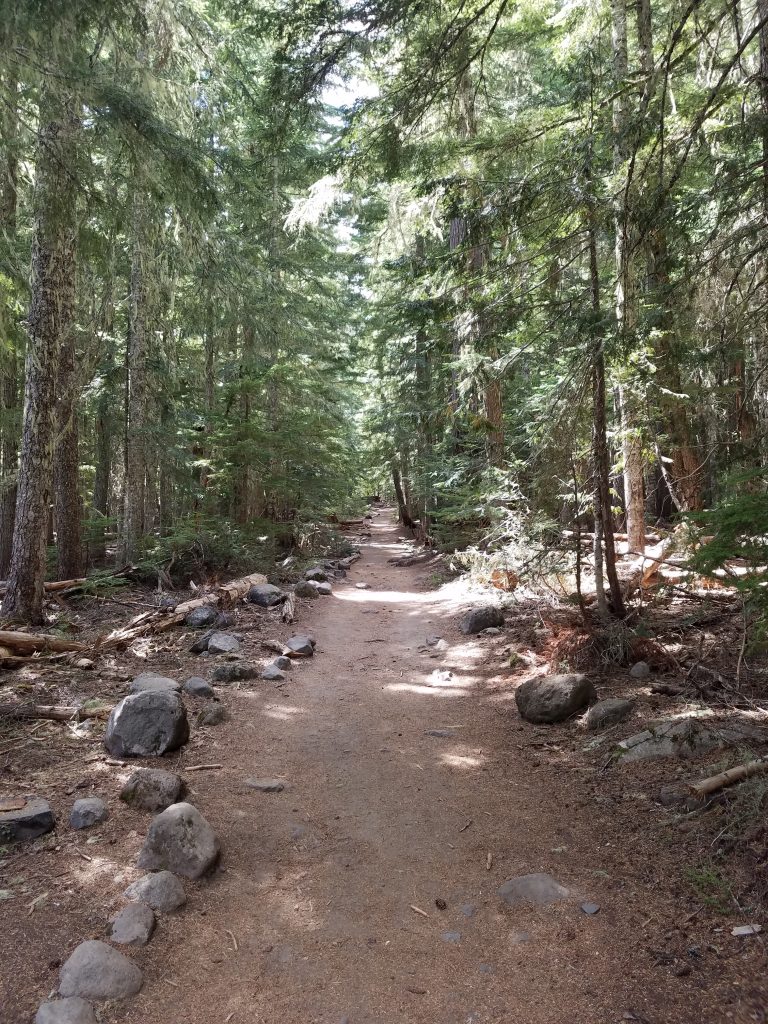 The trail moves up through big pines, and its wide and smooth enough for 2-3 people to walk abreast.    I passed a lot of people, many wearing masks.   After a mile or two the side trail peeled off to the Emmons Morraine.  Conditions immediately became sketchier – a dinky bridge over a glacial stream, a scramble up the powdery grey sand of the morraine, and much narrower footbed.   Eventually it became almost a bushwhack among a bunch of herd paths made by people following their feet.   And then this.  After this there was a pretty big washout, but you could jump/scramble it.   The trail was fine, I think this more for liability reasons than anything else. 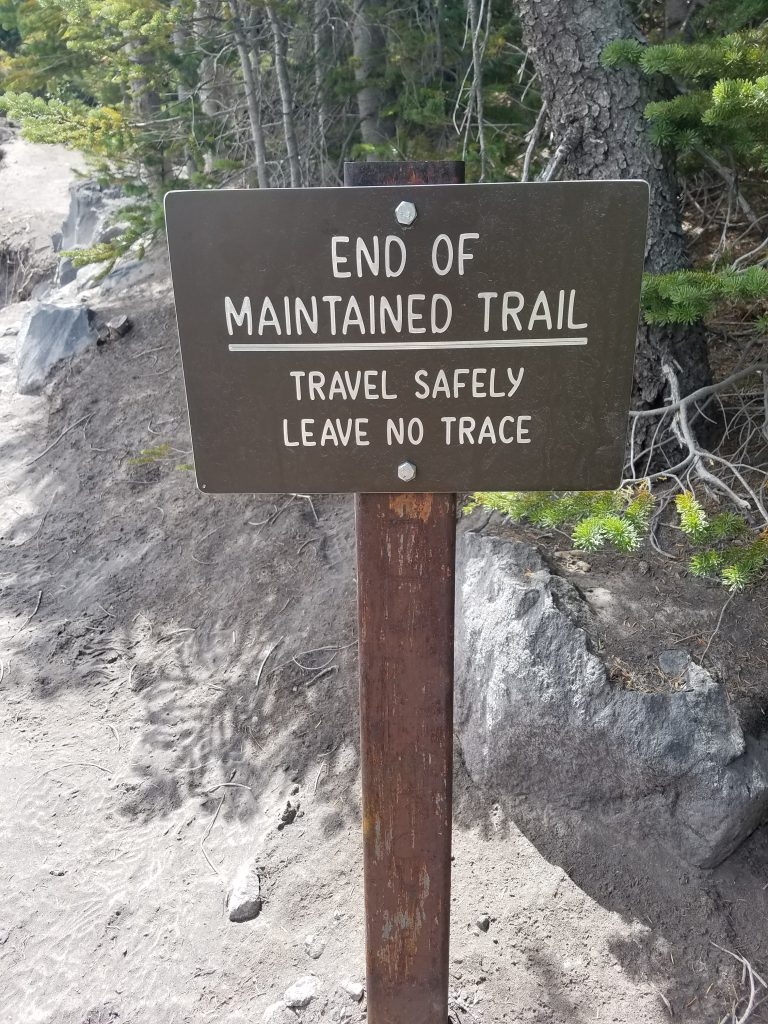 But the reward was this – cool views.   Since there’s copper in the area, the lakes were green.   Like, Shamrock Shake green, or if you put green food coloring into a glass of milk. 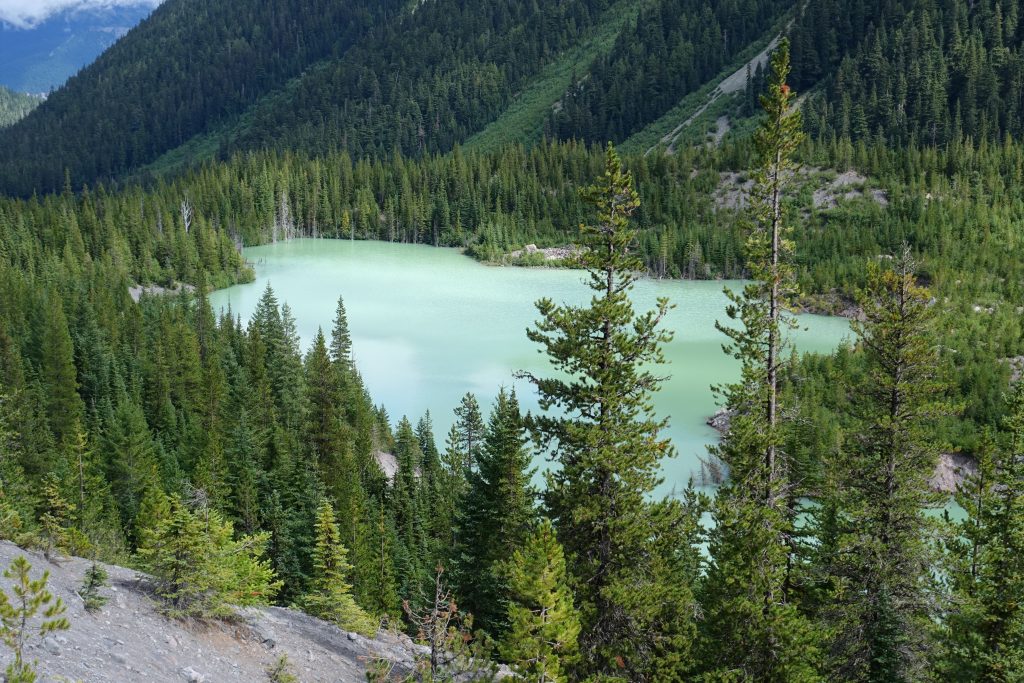 And then this – the melting snowpile in the mall parking lot.   The ice had to be a few hundred feet thick, all encrusted with rubble.    Below comes the White River, and then higher up the blue rivers of ice come down the East side of Rainier. 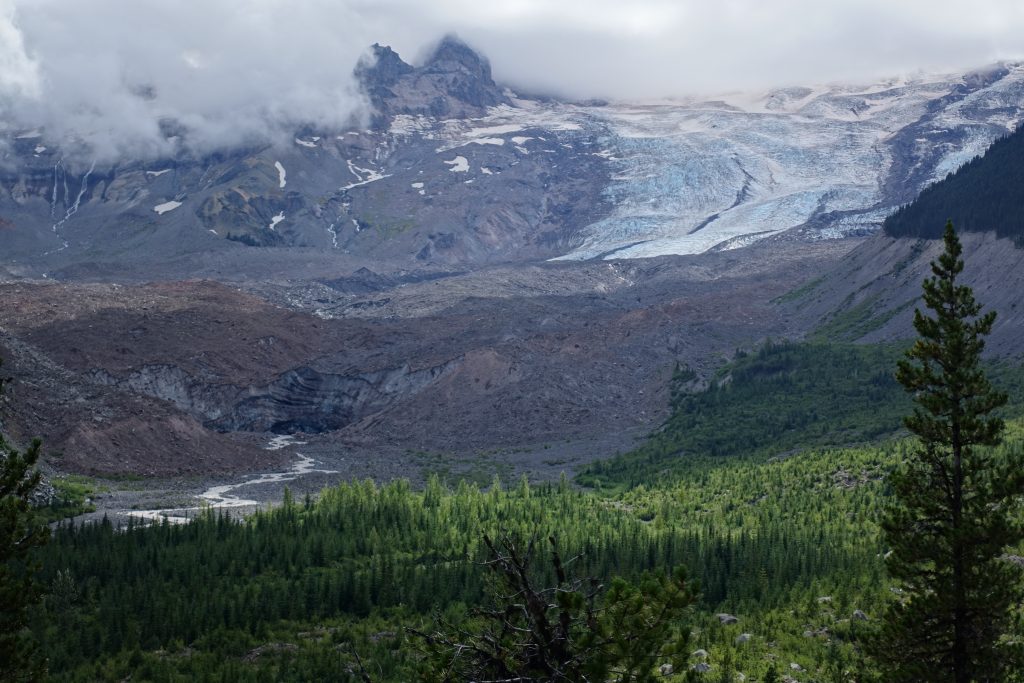 While the trail stayed easy, the climb began.   I’m not sure it was that steep, but for some reason, it felt it.   Maybe it was the end of a long day.   Maybe I was bummed out about leaving.   I got to the camp and found a site.  I bumped into another set of campers who told me the water source was a brown frog pond.   Clean water was a quarter mile back downhill.  I checked my smartwater bottle; still about a liter.   I can make it, I thought.   I wasn’t about to hike back down.

So I hiked up.   There’s a herd path leaving the camp heading up, I suppose as far as you’d care to go.   It was pretty open country so it’s not like you’d get lost.   I went up another half mile or so, and worked my way down to a glacial stream.   Not to drink, obviously, but to have a bit of a rinse, and an after-dinner snack.   It was super peaceful, with nothing else in view or earshot.   In that moment, you could have been the last person on the planet.  I really hoped I’d see a bear, but no luck, it would be just the three. 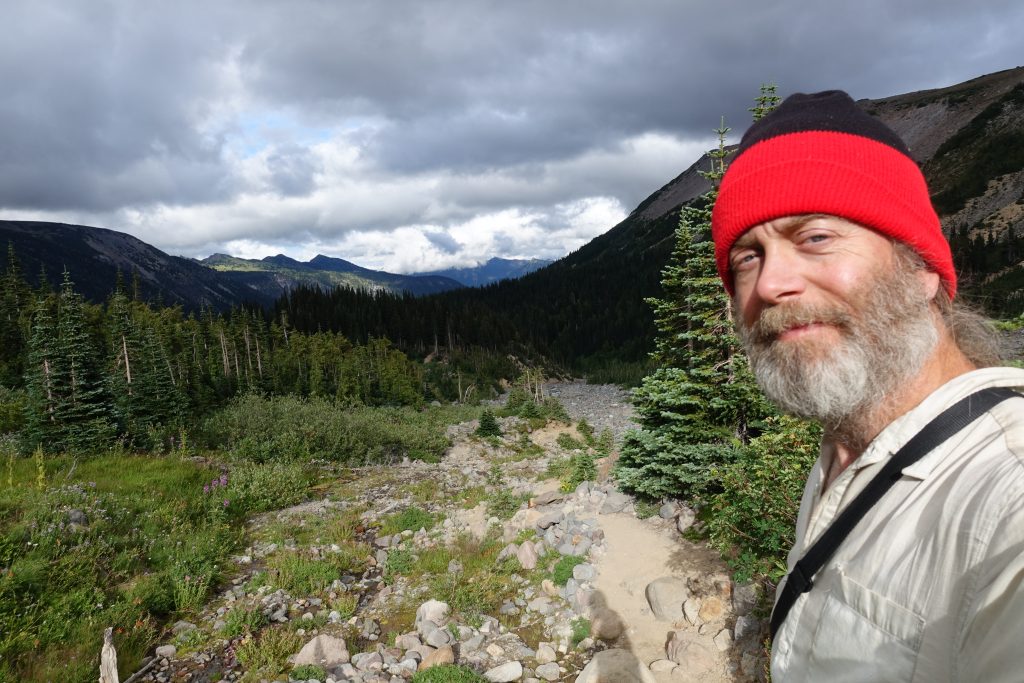 Since there was plenty of light I took a stroll around the brown frogpond, and a walk around the whole camp, which is kind of set on a tiny hill.   There’s a perimeter trail that also leads to the toilets.   Two right next to one another, but don’t worry, there was a privacy screen between them and the path. 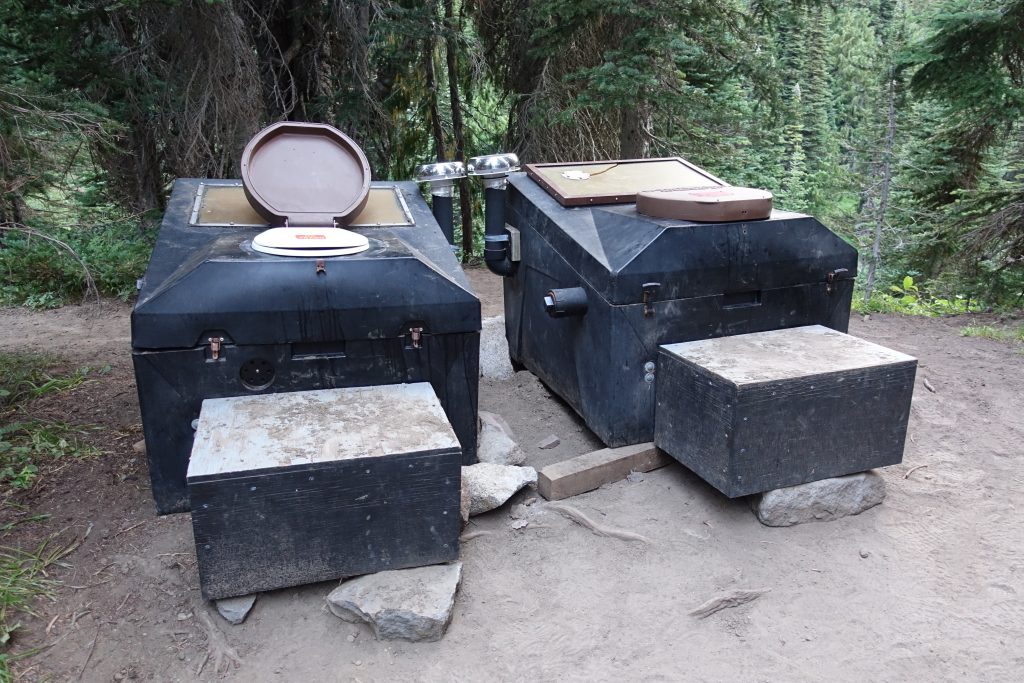 No real sign of rain other than some clouds, but I pitched the tarp anyway.   Couldn’t be too sure, and the elevation was a big wildcard.   Tomorrow would be up and over Burroughs Mountain, at 7400′ would be the highest point on the trail.