Recently I helped take a group of Boy Scouts up and over the Franconia Ridge Loop. The Scoutmaster invited me to speak about Leave No Trace, and to accompany the boys. This way, we could talk more LNT on the way up, and I was also a backup adult in case of trouble.  Like the Jundland Wastes, Franconia Ridge is not to be travelled lightly.

On Friday night, after a 10 minute speech about LNT, we talked a little bit about my Pacific Crest Trail trip a few years back.   Later I heard that 1 kid remembered to keep ahold of his map so as not to lose it and litter.   I also saw a ton of microtrash on the trail that nobody picked up.    But at least someone listened.

Atop the Ridge you look East into, and maybe walk a little bit in, the Pemigewasset Wilderness.   Part of the White Mountain National Forest, it’s been a preserve since the early 1900s when the entire thing basically burned from bad logging practices. 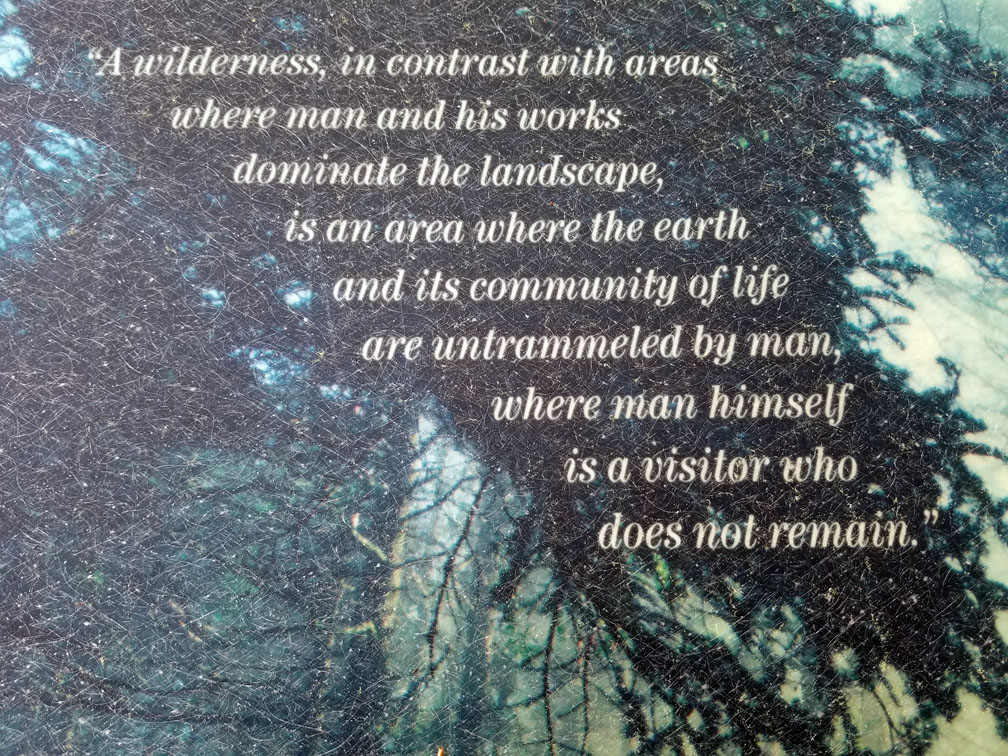 Saturday morning, we started on the Falling Waters Trail heading pretty much straight up, doing about 1100 feet per mile.   This is considered “steep”.  Quickly the group split into thirds.  The first group was the older, more athletic kids, more of the “racers”.  I stayed with the 3rd group, the “caboose”, taking the “sweep” position.   Knowing that everyone was in front of me helped keep track of all the kids, and parents.   We went pretty slowly.   After a few miles, a couple of the kids had run out of water, so I gave them mine.  I thought I could use my Sawyer Squeeze to refill – except it was brand new and clogged!   The next 5 miles were pretty dry.  Luckily I had camelled up at the campsite – this is where you drink lots and lots of water to super-hydrate yourself.   My hiking buddy Faceplant used to keep an extra liter as her “reserve tank” (former pilot), while I consider my bloodstream my reserve.   That strategy worked well – or at least worked.  But boy was I thirsty when we got to Greenleaf Hut (which turned out to be open – NOT part of the plan)!

Averaging about 1mph for the first 2.5 miles, we got to a side trail to the Shining Rock lookout – basically a giant slide with a steady stream of water running down it.   I’m sure in Winter or when the Sun’s at the right angle, the whole cliff face shines.   At the junction, we got caught by a bunch of dayhikers, and there was a lot of milling around and debating on which way to go.   Given the traffic, I stepped away from some of the Scouts and accelerated up the hill.   Not only did I leave them in the dust, but I caught up to, and smoked, a solo hiker that had passed us earlier.   The old guy’s still got it.    Shortly before the summit you pop up out of the trees and walk on the exposed rocks.   At least you’re supposed to – the signage was terrible and the strings and markers that keep people on the path were all over the place.   I spent a good amount of time sorting it all back out, and chasing people off the scree and onto the path.   I got more than one dirty look, and some of the boys were scandalized, but I’ve dealt with my share of dirty looks before.

We ate lunch or snacks at the summit of Little Haystack.   South, along the ridge, the Applachian Trail continued its way to Georgia.   About 380 miles north, lay Katahdin and the end of the Appalachian Trail.  We headed North.

The trail along Franconia Ridge goes north from Haystack, to Lincoln, to North Lincoln, to Lafayette.   In the cols between the trees return, or at least get a little higher, offering some protection from the wind.  Norht Lincoln is barely a bump between, I’m not sure why it’s a mountain.   There must be some geographic math involved.

On the ridge you’re watched over by ravens surfing the updrafts.   I told the kids about them, how they weren’t crows, how they lived in the boreal zone, how they croaked instead of cawwed, and how they soared.   Maybe the kids listened.

If its downhill, it must be easy.   This is of course, a huge lie.   Heading down Lafayette is a tough grind.   You’re walking on heavily maintained rock trails, which somehow are never the right height for a perfect step.   We joked it would be a nice place for a zipline.   From the top, down in the valley we saw a glider take off, pretty cool.

Greenleaf Hut wasn’t officially open for business, that would start the weekend of Memorial Day.   But the crew was there, and the solar power was on, which meant that the water was on.   And the bathrooms were open which was just a bonus.   If you stay over, I read that they no longer provide blankets – you have to rent them.   But this is a good thing, because those blankets are only washed once, at the end of the season.   So the wise hiker sleeps in his bag anyway.   If you’re looking for the true rich-person experience, pay lots of money to stay here and have them cook dinner and breakfast for you.   They chopper up all the food and propane.   In the old days, the kids used to pack the food in, in 100lb loads up the mountain.   Kids these days don’t know how good they have it. 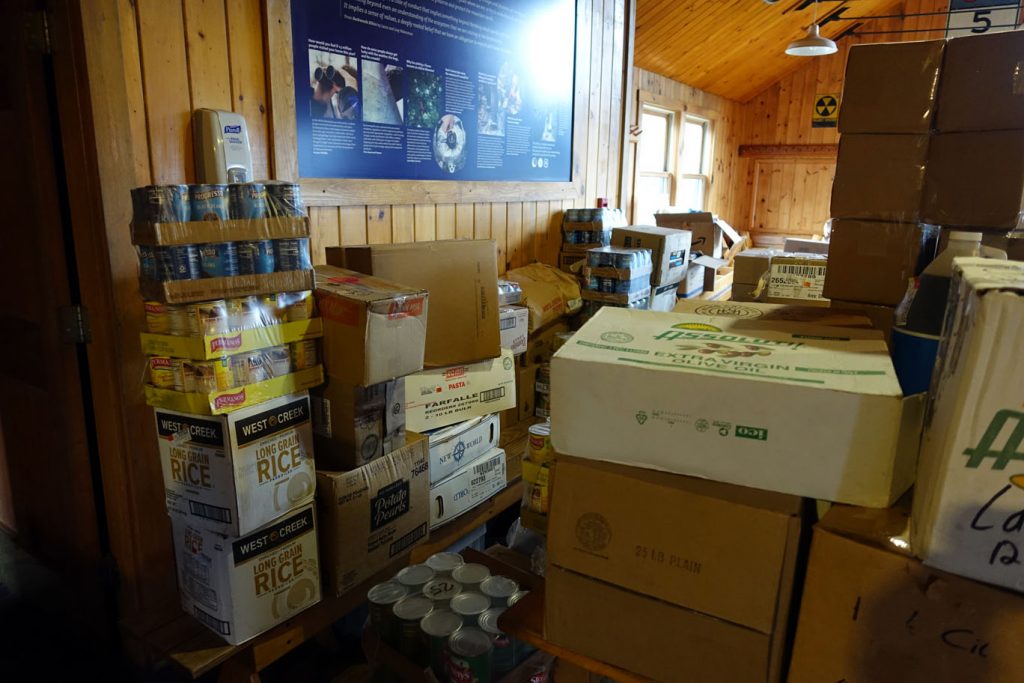 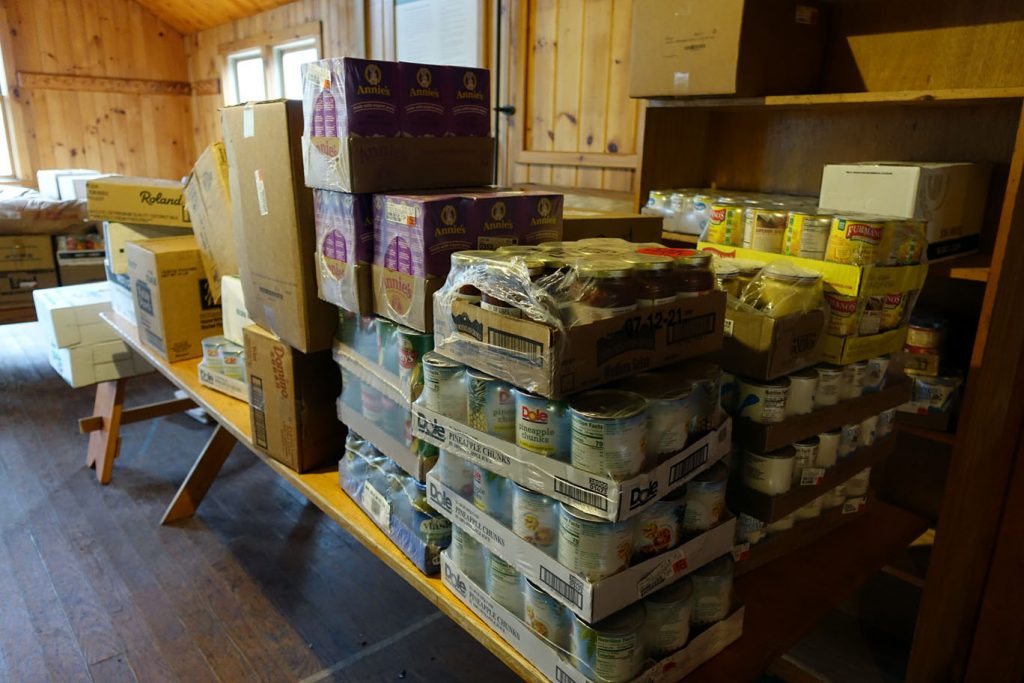 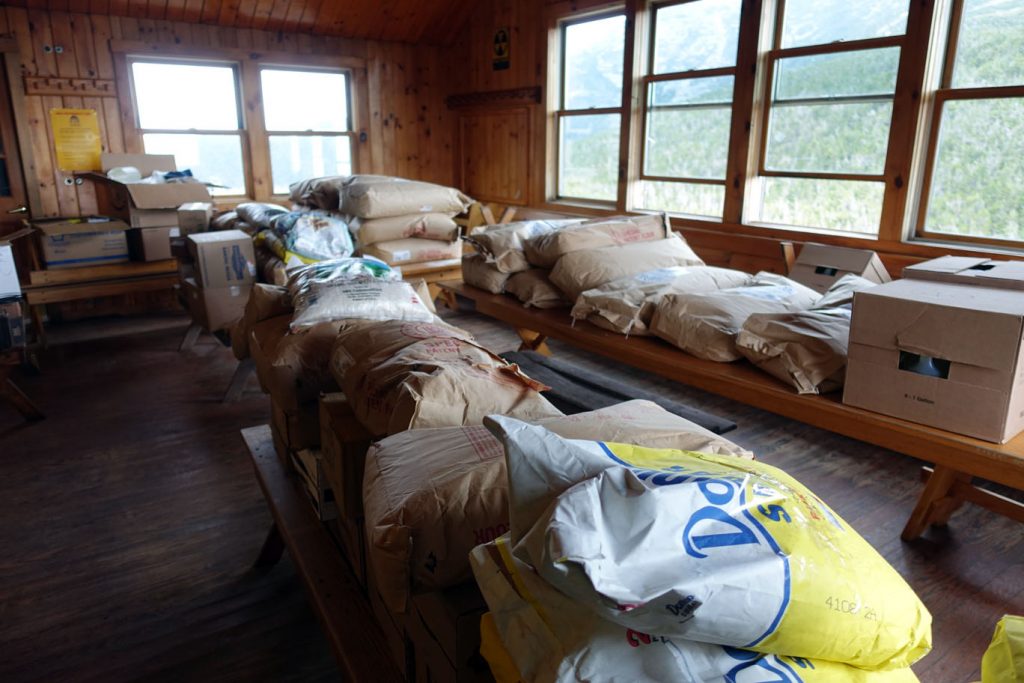 After we rested and ate and drank, the lowering clouds continued to lower, so I shooed the Scouts and parents down, knowing I could easily catch them.   Two of the boys set off ahead, and immediately turned right down the wrong path.   “But its to the parking lot!” they cried.   Yes, the OTHER parking lot.   After pointing them and the parents down the right trail, I went back to the Hut and hung out for a bit, pet a few dogs, and talked to people.   Surely I’d left enough buffer, I thought.   After about 20 min I left, and immediately caught the tail end of the group.

And then the rains came.   First a seductively cool mist, then a sort of drizzle, then a downpour.   “Hey buddy, lets stop and put on our raincoats” I had to tell one of the Scouts.   Things were getting real.  The wind and cold and mud were one thing, but this weird brown rock we were walking on was another.  Not your usual New England granite, roughened by exposure, this was some kind of metamorphic rock, smoothed by the passage of many dirty boots into a sort of slippery film.  Very fun.   “Scoot down on your butt if you need to”, I told the kids.   “You can’t fall if your butt’s already on the ground!” 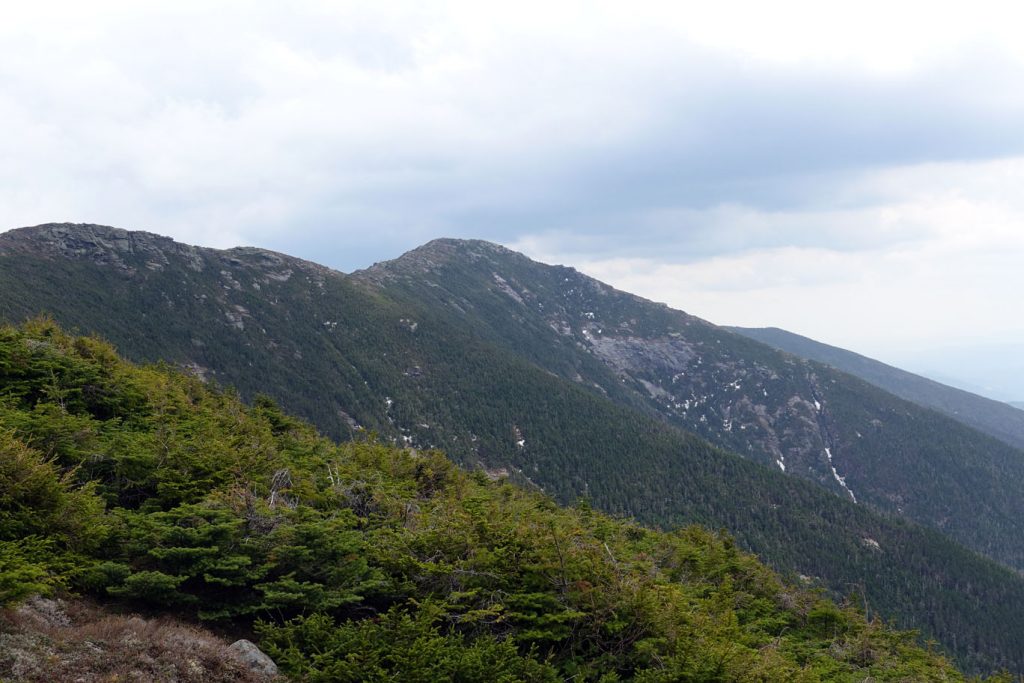 As with all living things, each person performed according to their gifts.   Before long it was just 4 of us at the tail end, 2 adults and 2 kids, creeping along in the rain.   The pair behind me was father and son, and the kid in front was wearing jeans.   It was a pretty easy decision, I had to get him down and out of the rain.   I took the figurative reins off him and we quickly outdistanced the other two, rapidly dropping altitude and getting warmer.   The rain eventually let up and we cruised along for a bit.   We held up at a good spot as other hikers started passing us, and we knew the group was right behind.  Eventually we caught up with the Scoutmaster who had waited for the “caboose” of the group, and we all finished up together.  The last mile or so was pretty easy; well trodden paths, a light maple and birch forest with plenty of light and warmer air.    Even so, we were glad to see the parking area at the bottom.

Dinner was a more subdued affair than the first night, all the adults and half the kids were pretty beat.   There was a fire of course, and cookies to eat.

It rained overnight, but I barely remembered it.   I slept pretty soundly on my double mattress (Ridgerest + NeoAir), and had my feet up.   I woke up around 6am feeling great.  A few of the adults were up, no kids were moving.   After pointing out to the Scoutmaster that the boys had left packages of cookies out on the ground (a LNT no-no), I packed up my stuff.   Car camping makes you lazy, some of the stuff got just thrown in the back seat.   We were all going to have bagels and oatmeal for breakfast, but I recalled a nice diner in North Woodstock, so I made my excuses and left.   Heading down into the village, I saw it was only open at 8 am, so I went for a drive up the Kancamagus Highway.   It winds east through the Whites, and is a fun road to drive.   Plus the views were killer.   I was hoping to see a moose, but no luck.

I’ll be back.   I want to do the Pemi Loop again, of course, but I also want to peakbag both Galehead and Owl’s Head.    I missed Galehead last time, a tiny spur trail off the main path that I simply overlooked, and Owl’s Head is in the big Pemi bowl, it should be a cool walk.  The next trip will be a walk up the middle of the Wilderness, with a bootleg camp and ascent up the Owl’s Head slide, then an up-and-back for Galehead.