Day 5 of my Wonderland Trail hike, from Golden Lakes Camp to the South Puyallup River camp via Klapatche Park. 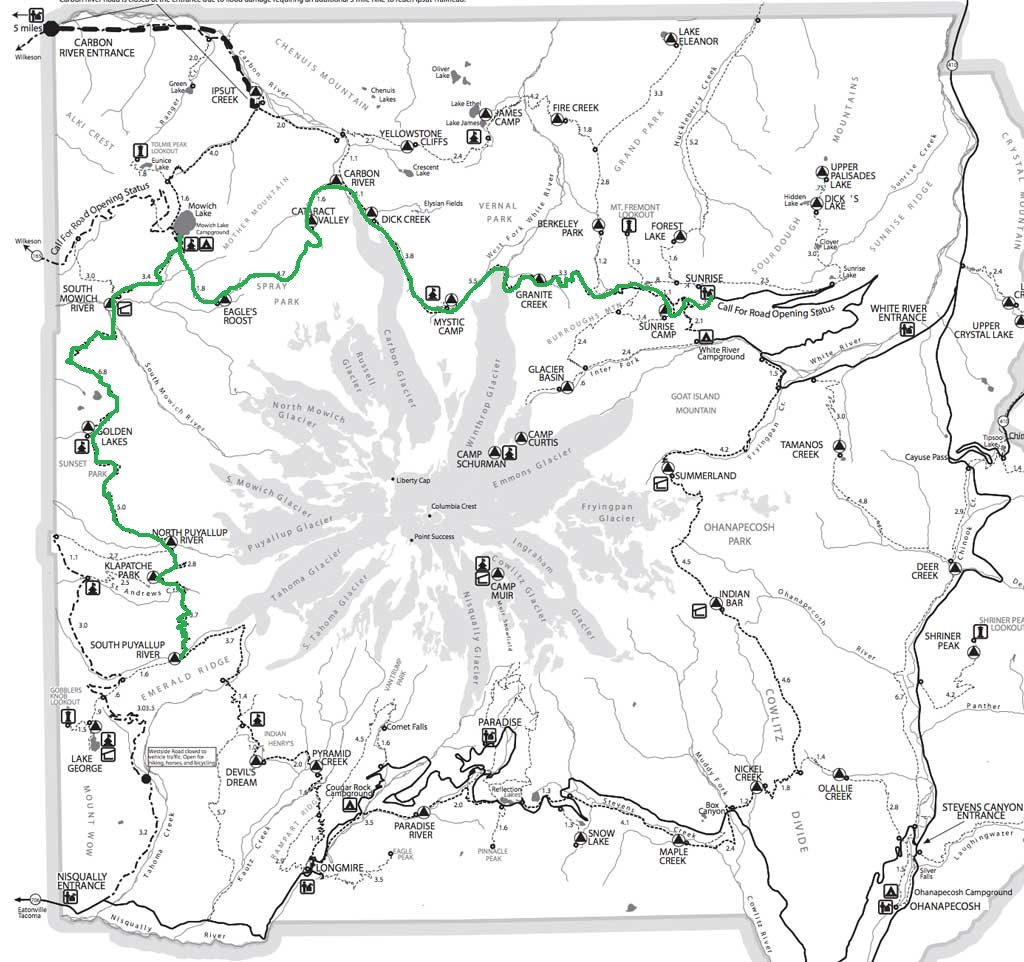 Another day that started easy, and then a big downhill.   There was much debate on the trail how one pronounced the word “Puyallup”.   “Poo-ya-loop?”   “Puy-allup?”    “Poo-la-yoop?”    I think “Puy-allup” is closest to the truth.   The nice thing about it being a National Park, and the nice thing about it being in the Pacific Northwest, are the giant pine trees.   Some are pines, others cedars.   A good guide is here.

On the opposite end of the spectrum are the wildflowers that cover everything.   In addition to the Indian Paintbrush (both colors) and the purple Lupines, there are frequent splashes of Tiger Lilies – these grow all over the place out there, but they’re tiny.   Like 2 inches across max. 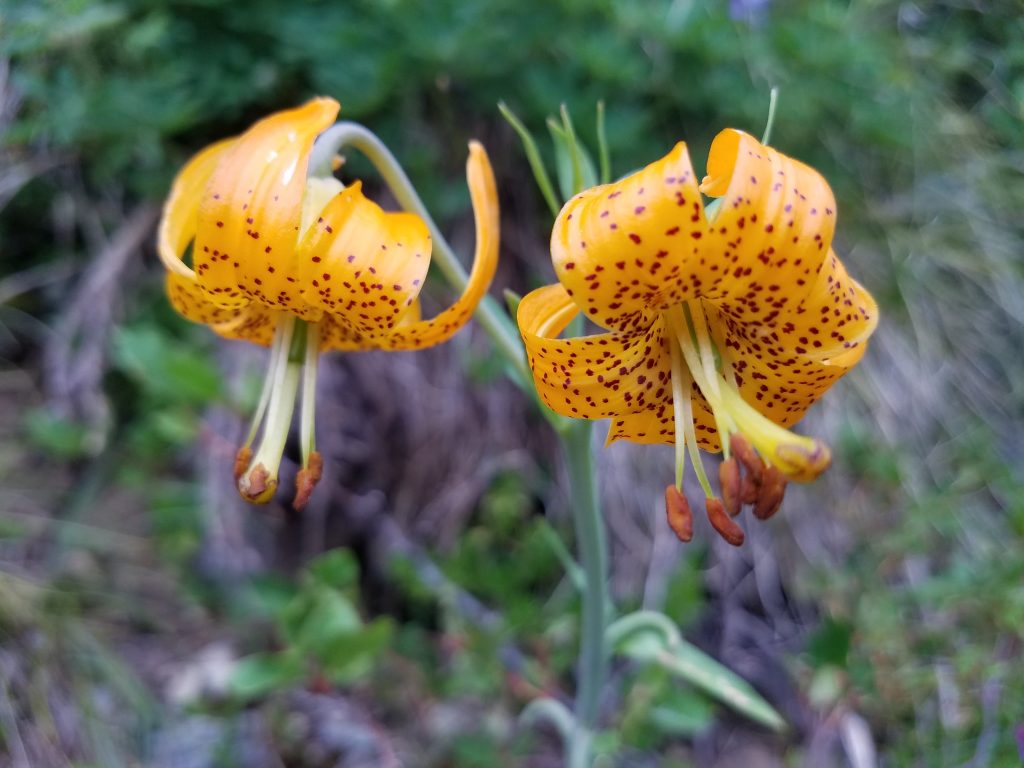 If the sapsuckers are anything like the ones in the Northeast, this is from a sapsucker. 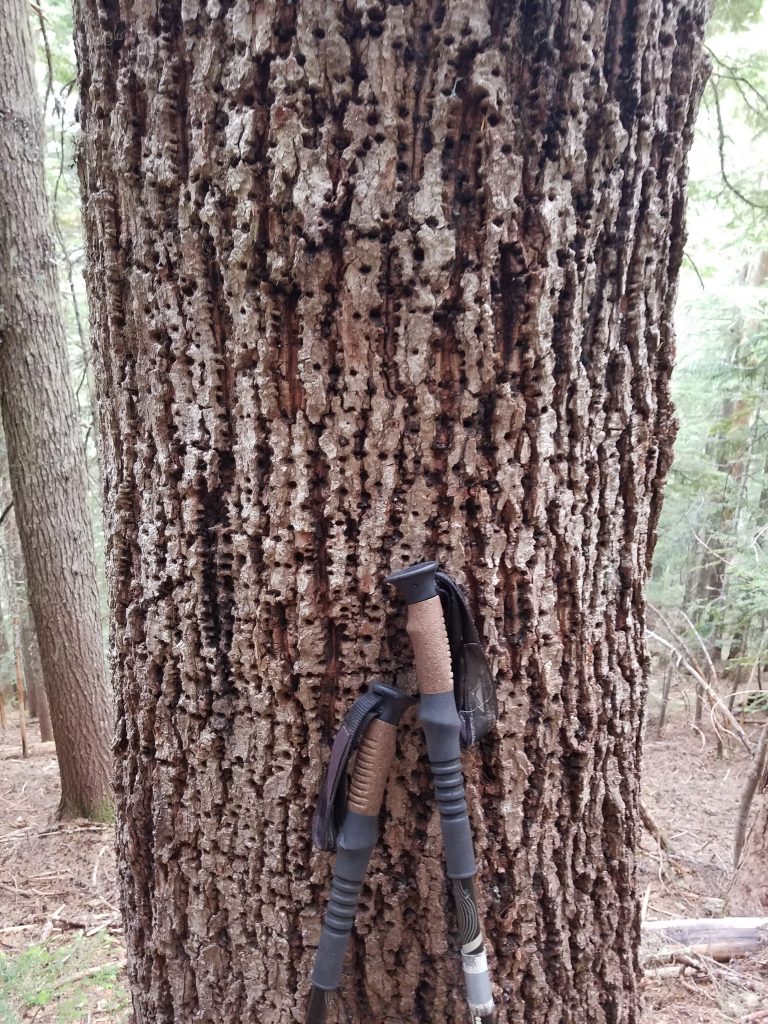 Where there’s a break in the forest cover, typically on a rocky slide left by some previous avalanche or rockslide, the trail cuts through thick hedges of brambles.  Salmon berries!   Not quite ripe, but a nice change from the huckleberries and thimbleberries. 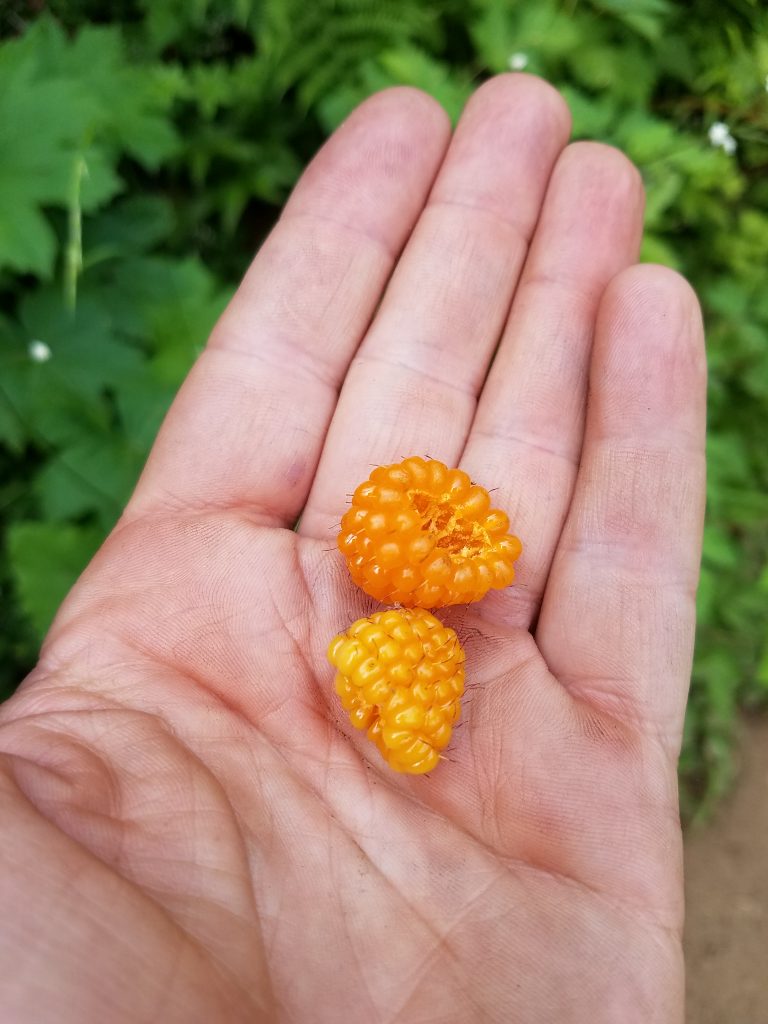 The grind up from the N. Puyallup River was just that, a grind.   You do about 2000 feet in maybe a mile and a half.  It’s largely switchbacks though, but still.  Lots of exposed areas, and hazy humidity.   And brambles.   Looking at my map, I’ve left myself the note: “rough”.   But at this point I was a few days in, my calves stopped hurting, and my food load was dwindling.  Here’s the tail end of the Puyallup Glacier.   I was pretty low on steam at this point, and “are we there yet?” was playing on repeat in my head. 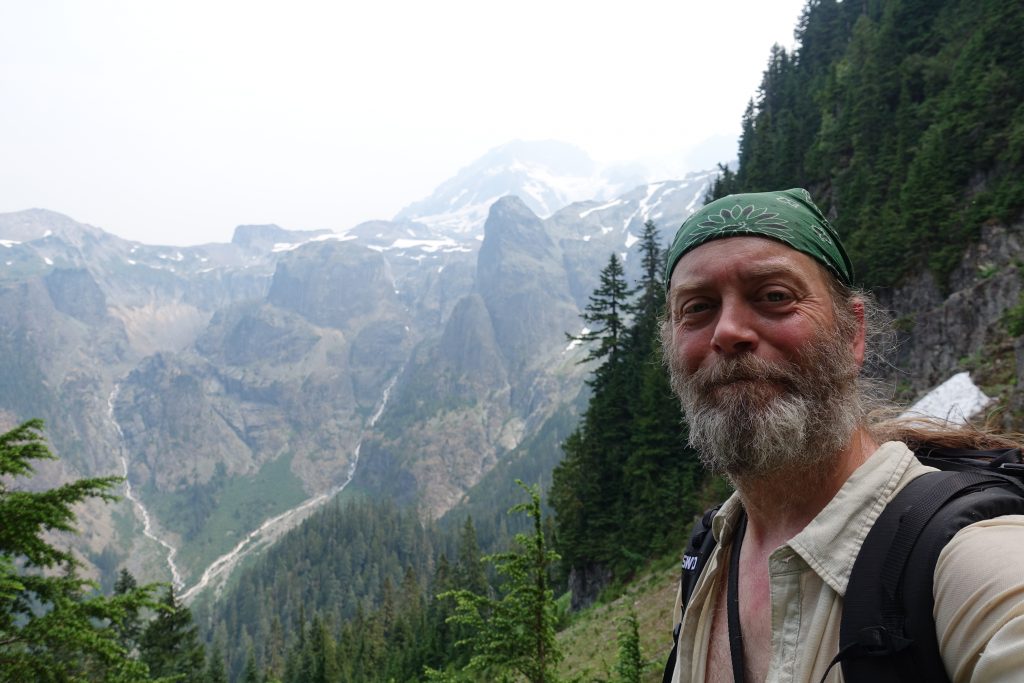 Once you run out of hill coming up from the river, the trail opens up into Klapatche Park.    I did some off-trail exploring on old herd paths, and found a place that was flat, in the shade, and for some reason on relatively bare ground to have a bit of a sit and a meal.   My avocado was finally ripe, so it went in with the cheese, Fritos and tomato paste.   Tomato paste, along with nutritional yeast, are 2 of my secret ingredients that go in everything.  A well deserved lunch, and one fit for the time just sitting and savoring.   The hazy weather was weird, not only was it hot and hazy, but there was no wind.  I think I counted 3 times the entire hike where the wind was enough to ruffle the map when I unfolded it.   Try that near treeline in the Northeast – the map would be snatched from your hands and end up in the Atlantic!

It was especially gratifying eating half the avocado, just think of the pack weight savings! 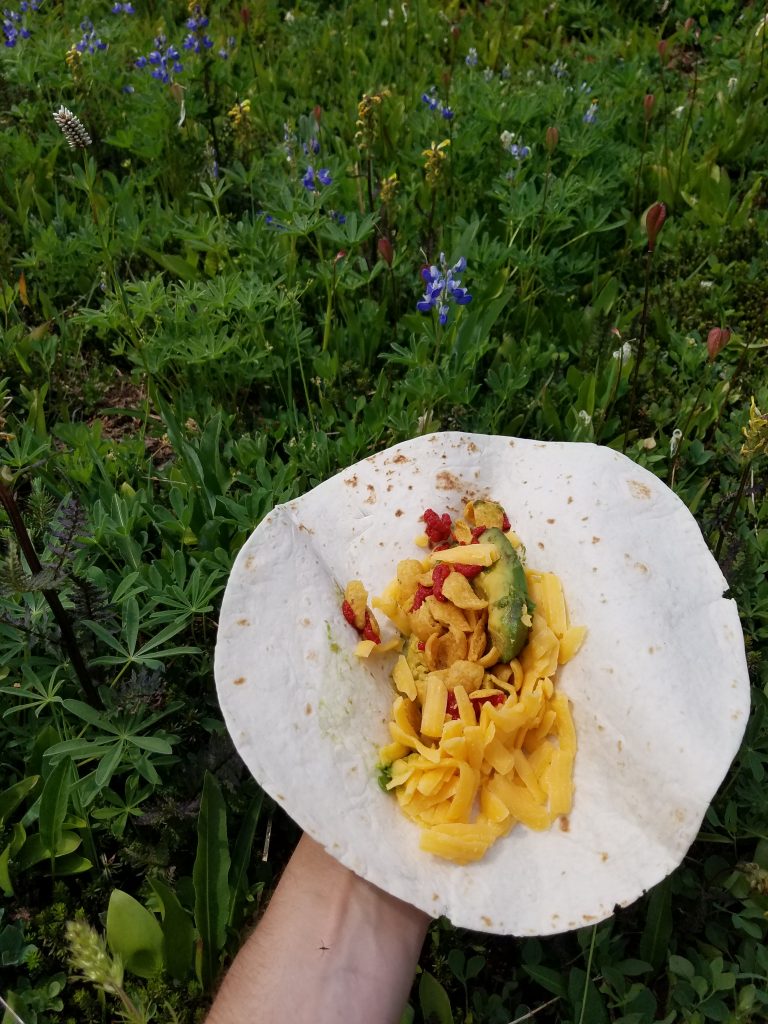 After lunch I went to the actual campsite, Klapatche Park Camp.   The water was this cool tadpole-filled pond, slowly drying in the sun.   The water was fine, I’m sure, but frog pond water tastes, well, froggy.

At this point there were 5 miles until camp, and 8 hours to do them in. 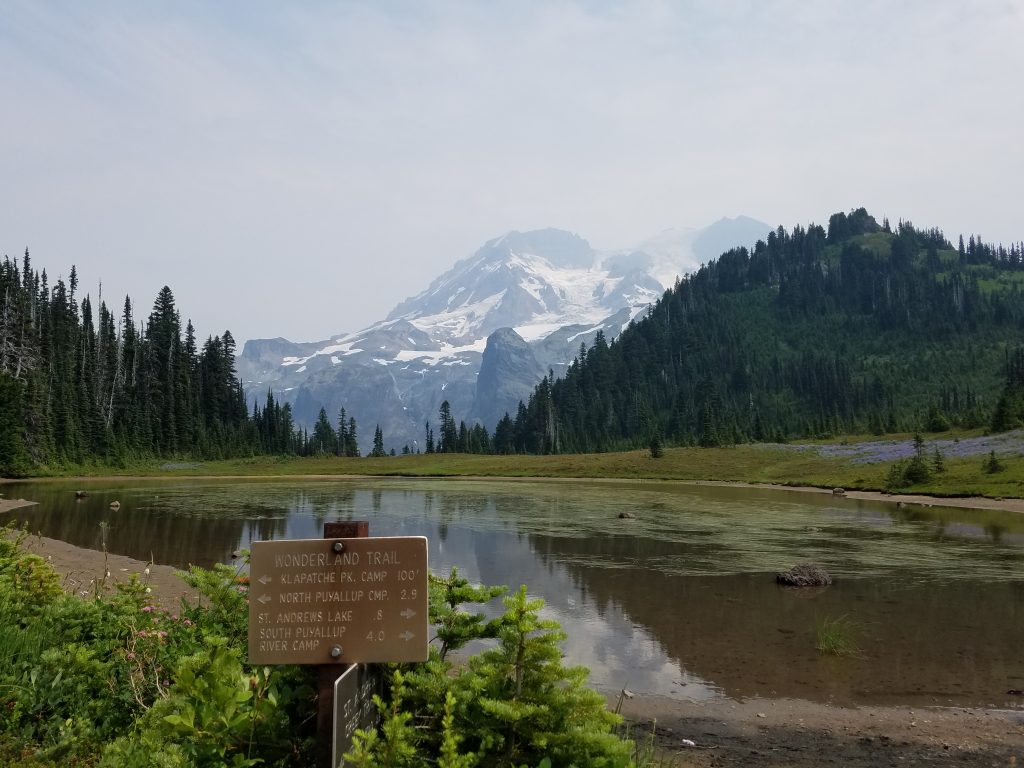 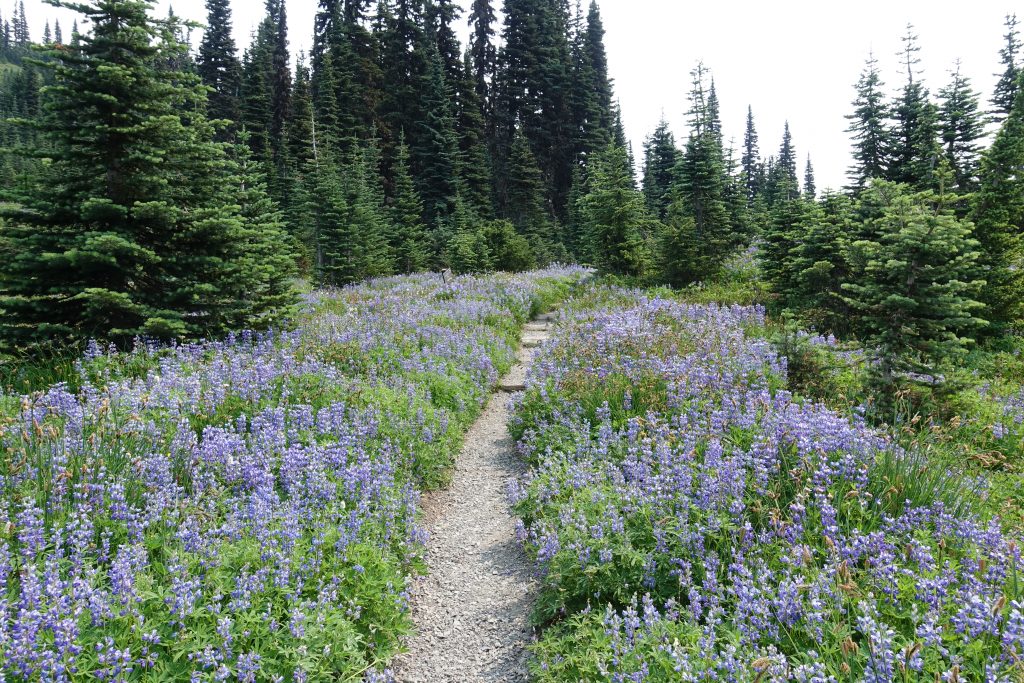 I still had lots of time, and mostly flat or downhill, when I got to Lake St. Arnold.   I spent 6 hours here – a quick skinnydip, lunch, a nap, another swim, and then dinner.   I had really anticipated seeing bear or elk come down to drink, but all I saw were these cool swallows that kept wheeling over the lake, dipping bugs.    It was odd, the whole flock would arrive, fish for a handful of minutes, then leave.   I wonder if they were working multiple small lakes, and rotated after all the easy bugs were eaten.   The mosquitoes were bad here, but I found some flat bare ground under a pine, put the headnet on, draped the shemagh over me for an extra layer, and closed my eyes for a bit.   Awesome.

The water was pool-clear, and refreshingly ice cold.   You know that kind of cold shower that would normally freeze you, but your body is cranking out so much heat you reach equilibrium?   That cold.   And so welcome on what felt like an 85-90 degree day.

From here it was a sunset walk pretty much flat through the rest of the park.   I checked out some marmots, didn’t see any mountain goats, and then down, down, DOWN at over 1000′ per mile.   Here’s the unreachable, and clearly not drinkable S. Puyallup River.   Right after this on the left is the Camp, which was another really good one – 3 well crafted and well separated sites, plus a group site, clustered around a feeder stream.  The stream was dry, at least the folks at the group site told me.   But if you went upstream a little, and listened, you could hear a trickle, so I managed to fill by 2L bladder.   If there’s no water here, you have to go 1/4 mile uphill to a year-round snowmelt stream that crosses the trail.  No thanks.   I had already eaten dinner at St. Arnold Lake, so it was a quiet evening of rehydrating myself and watching the sunset.

Sunsets on the Wonderland are unique each night.   Because you’re always in a valley, and that valley points in a somewhat random direction, the sun sets in different places relative to your view each night.   More interesting stuff. 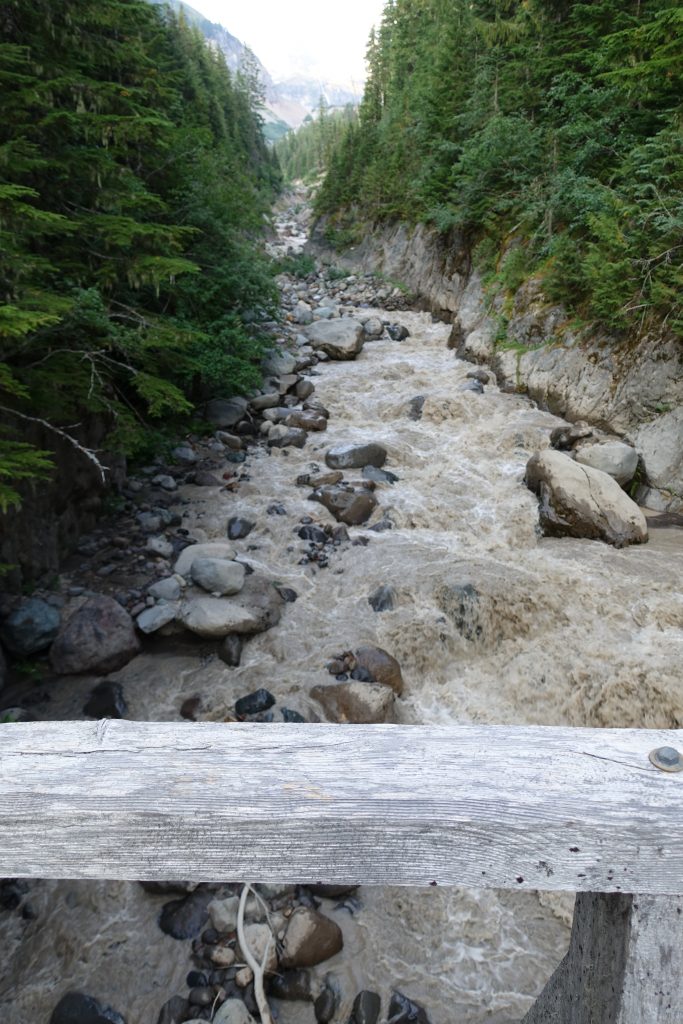