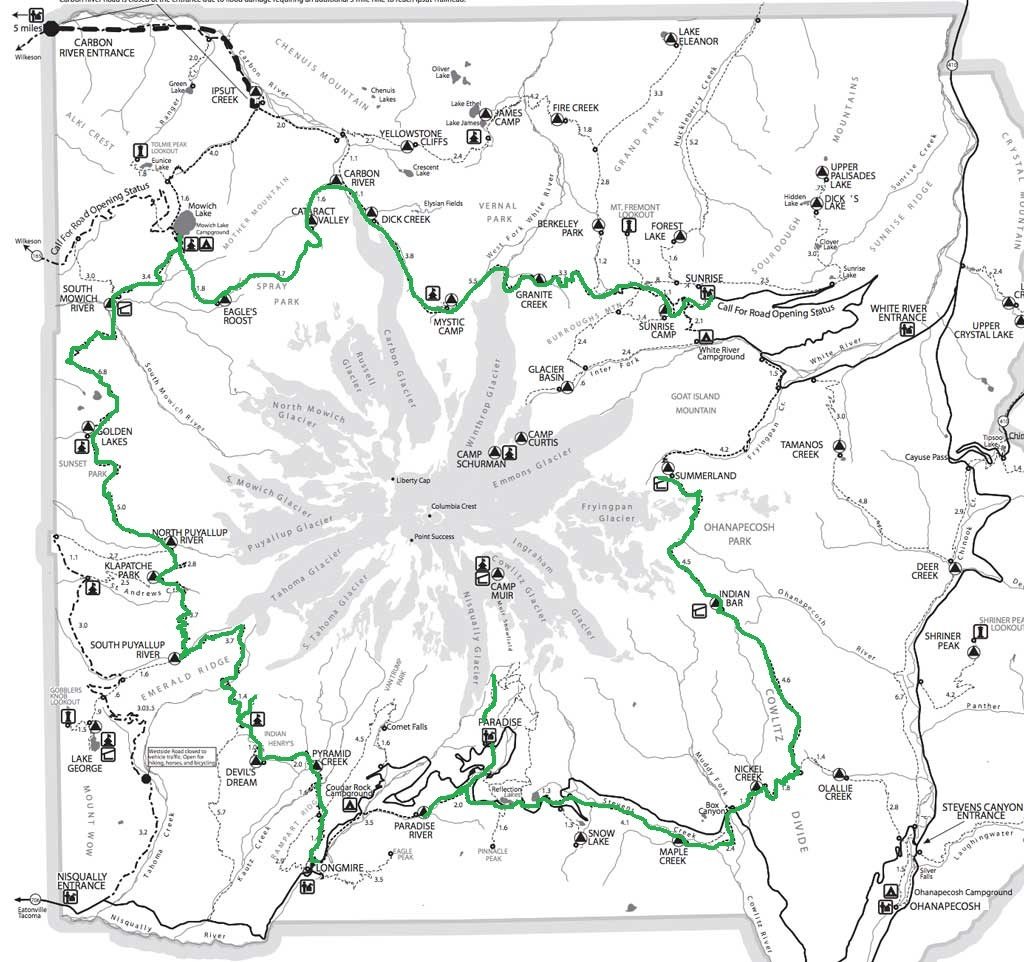 Up into the haze

“Cowlitz Divide is dry”, they said.   “It’s 6.5 miles from Nickel Creek to Indian Bar”, they said.   “Ok, I’ll fill my water bottle”, I said.   It’s not like we’re hiking across the Sahara here people.   But it was a humid, steep grind in the early morning, as I raced the sun.   I didn’t want to do the climb in the heat.   I got to the top just as it emerged from the low-lying clouds and wildfire smoke. 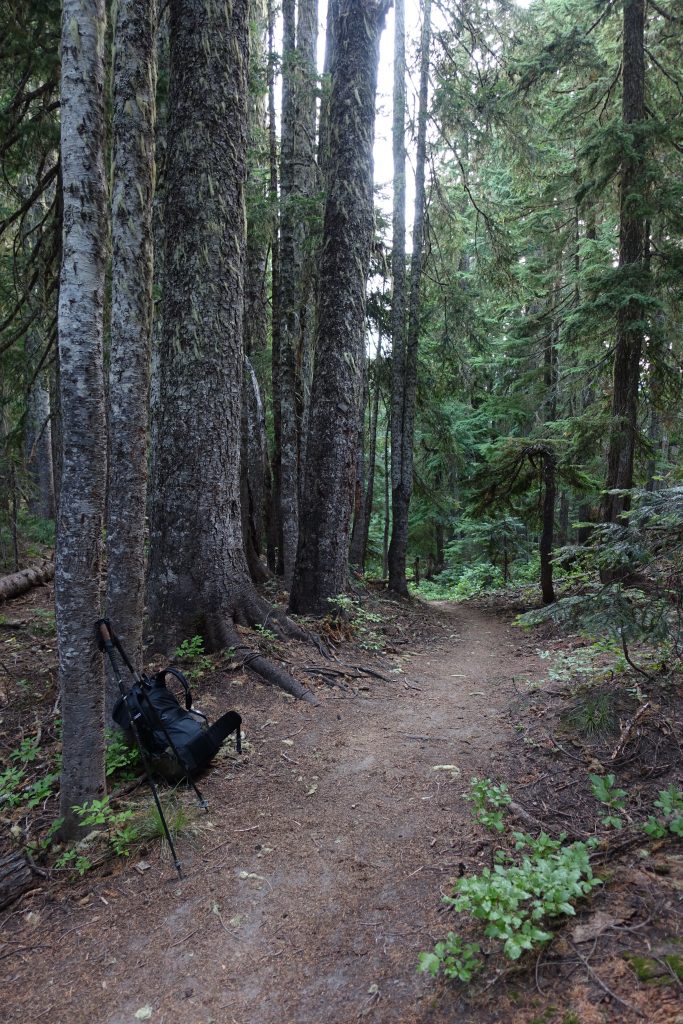 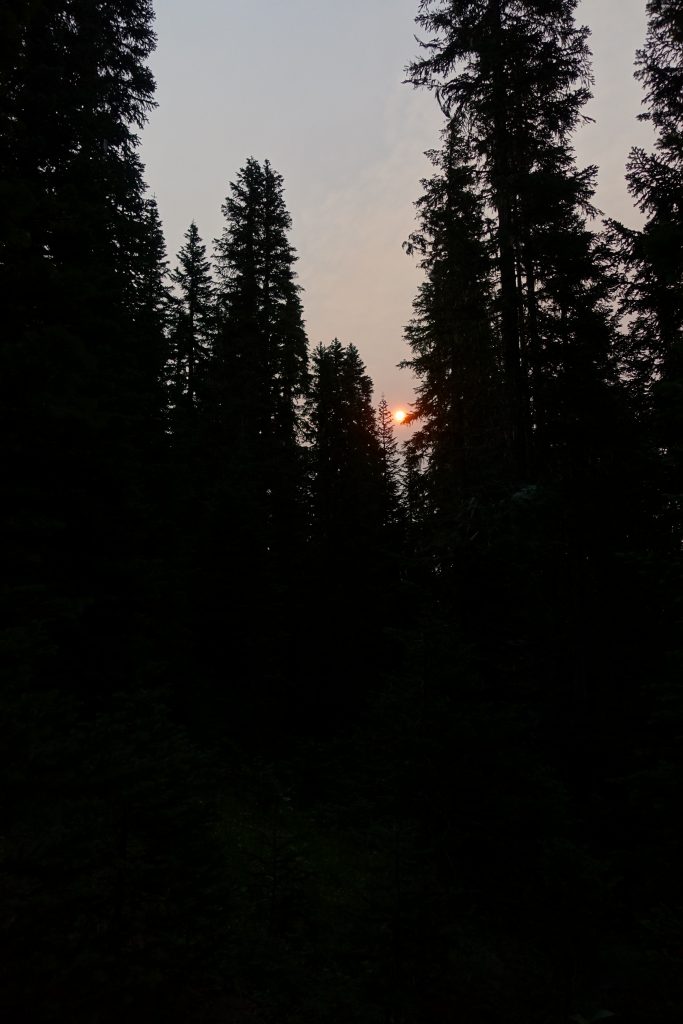 Looking at the map, the straight trail at the top of a climb feels like it ought to be flat, like once you gain the ridge you’re good.  You’re not.  It’s like Franconia Ridge in NH.   Flat, except for the 500′ ups and downs you have t to navigate.  In the weird quiet I started thinking back about the whole trip, and realized it was almost over.  Got kind of bummed out about it – 1 more day from here to Glacier Basin, then meeting a friend for the day, then Seattle and home.   I guess you have to leave Never-Never Land at some point. 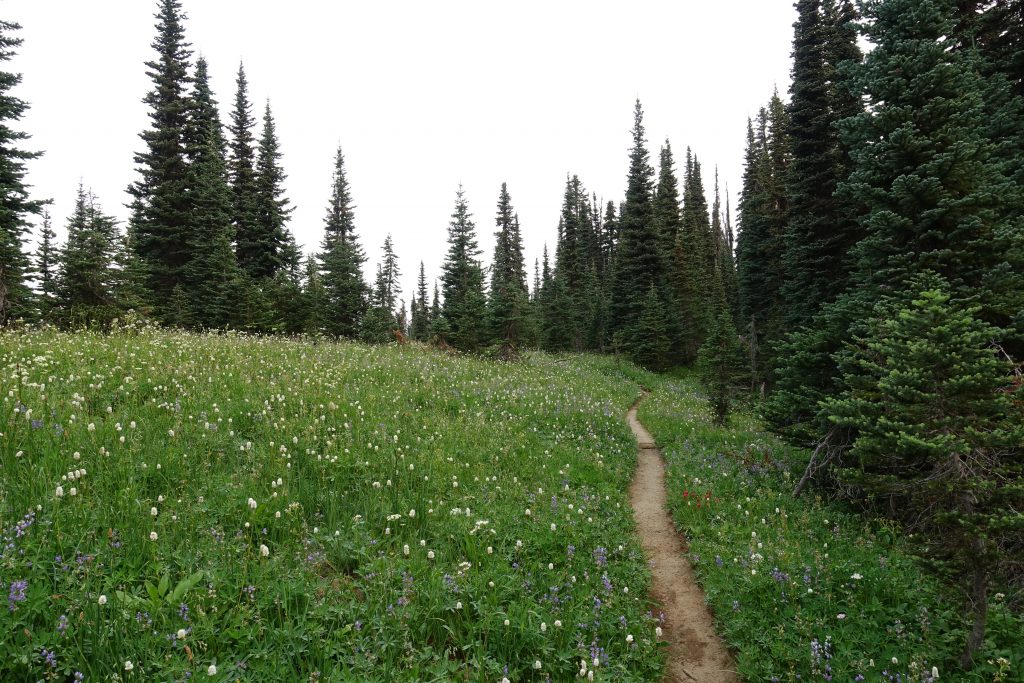 Despite the haze and clouds, there was a quiet, subdued beauty to the place.   I came upon a family of 3 marmots in this rock formation.   Mama and baby ducked down below as I approached, but Papa stayed guard up top.   He was so focused on me he never put down his mouthful of fodder. 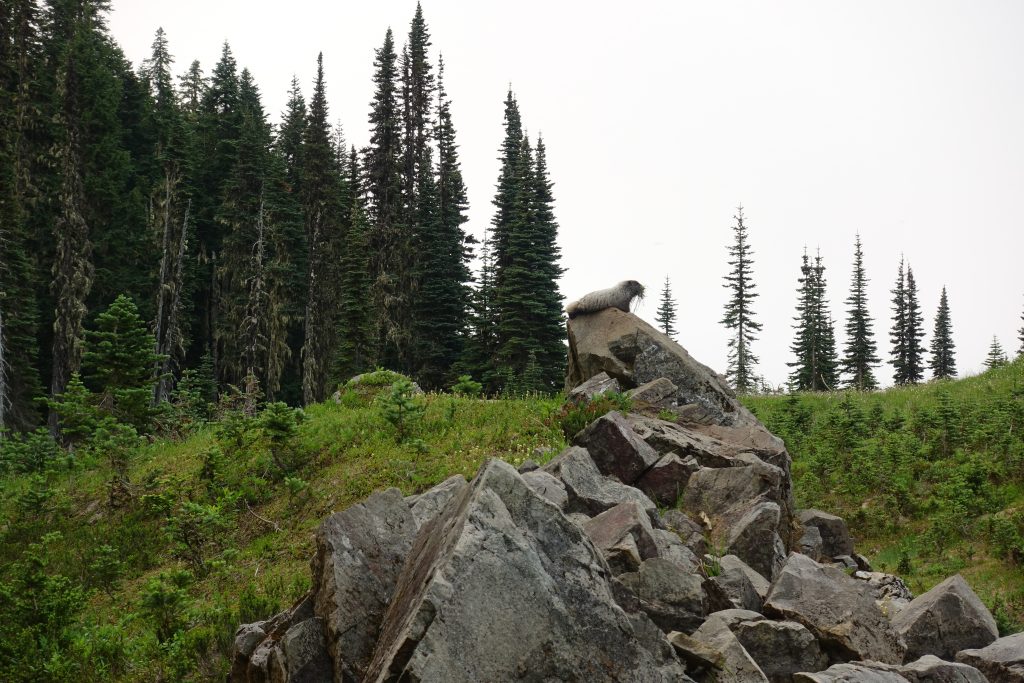 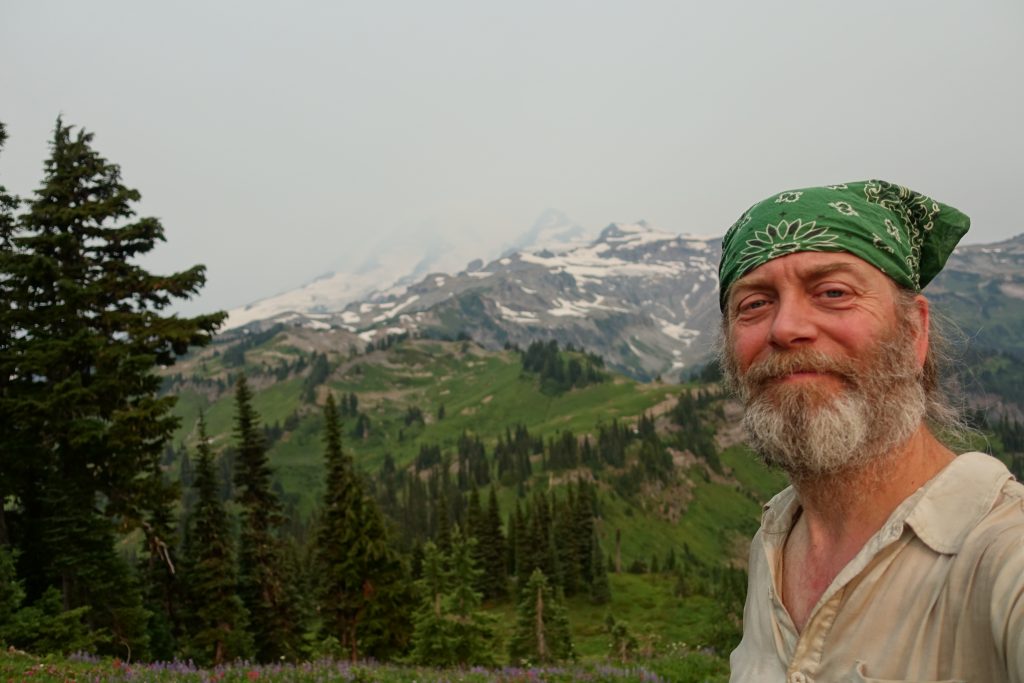 After long than I thought, the trail started to dip slowly down towards the big cirque area called Indian Bar.   The hills ahead looked really exciting, but I was ready for water and a break. 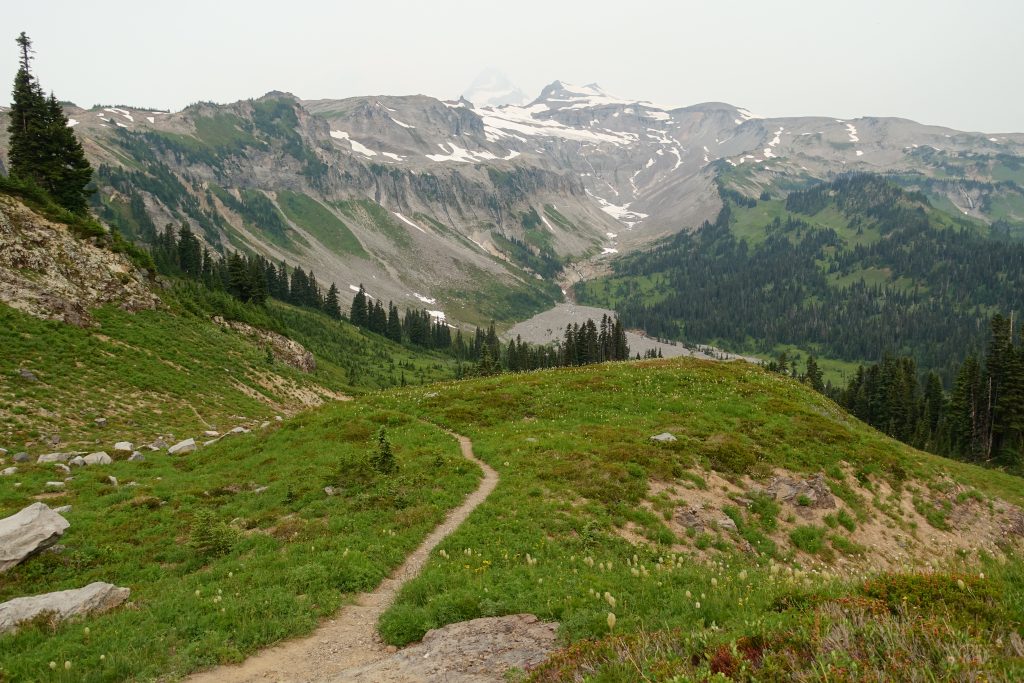 If you can wrangle a schedule at the Group site, here’s home.  Instead of the mezzanine style in the Smokies, it had a plank wood floor, and a few wooden bunks.   In the end it probably would have been less comfortable than sleeping on the ground, and I bet there’s mice under the floor. 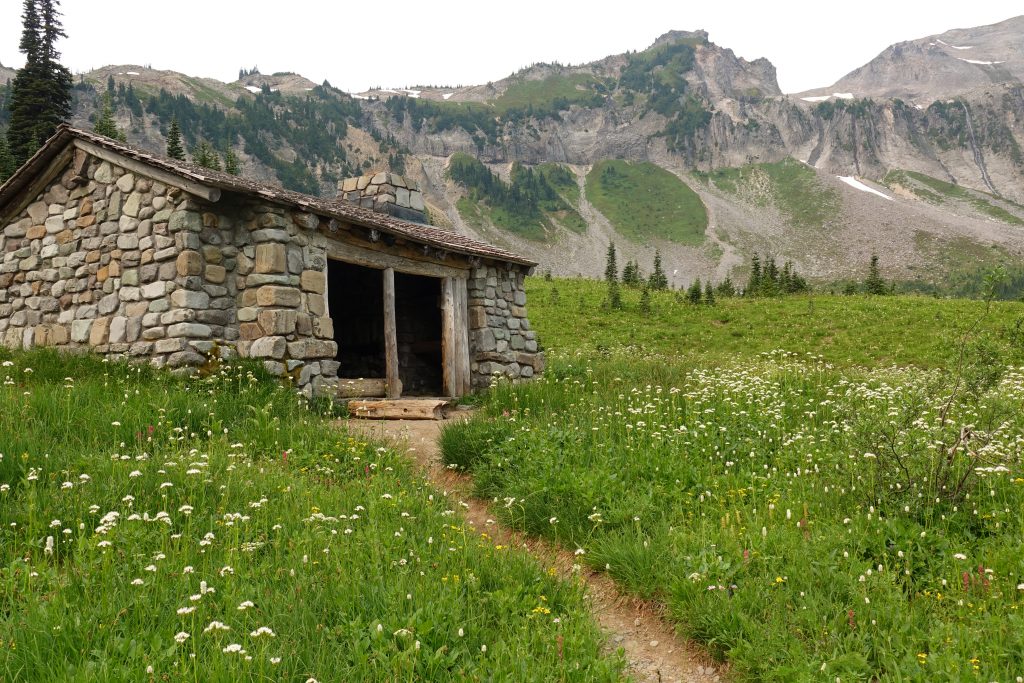 Here’s second breakfast, or first lunch, or whatever.   Tortillas and cheese.  And jalapeno kettle chips!   The water was ICE cold, but I soaked my feet and brought them back to life, and rinsed the shirt.    The shirt remained clammy for some time, but instantly warmed up when I started the 1000 foot climb out of here.  The water looked so good I drank some straight out of the stream. 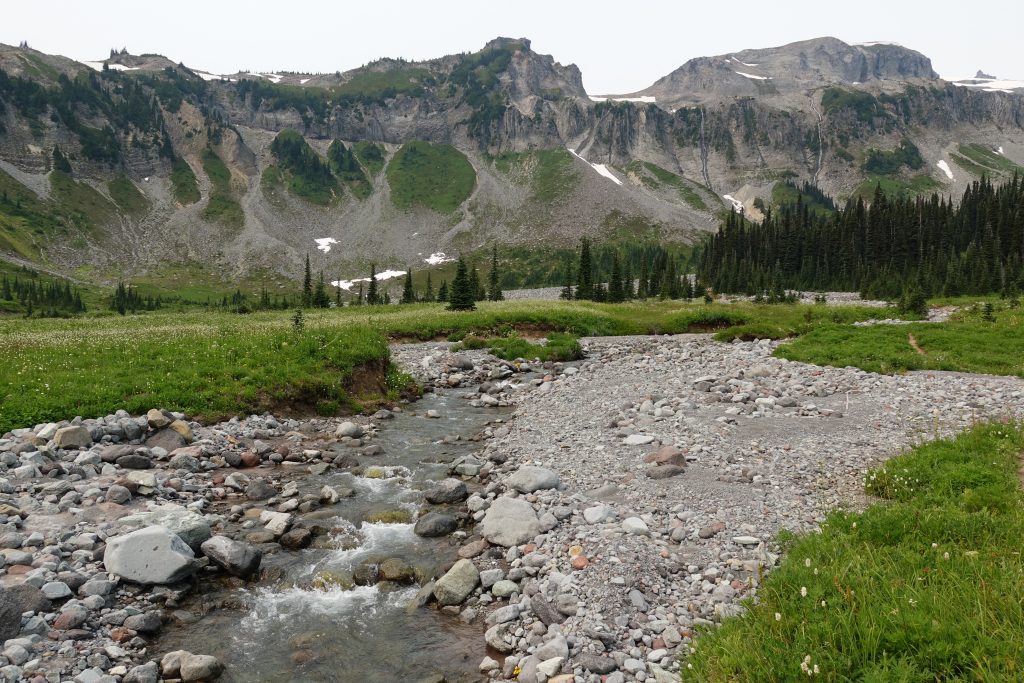 The trail moves up and to the right of the big cirque area.   Look 3 pictures up, there’s the big stony valley in the middle, and to the right a line of trees and grass.   The trail hugs that clifftop, often with some very close overlooks if you’re brave enough to walk out on them. 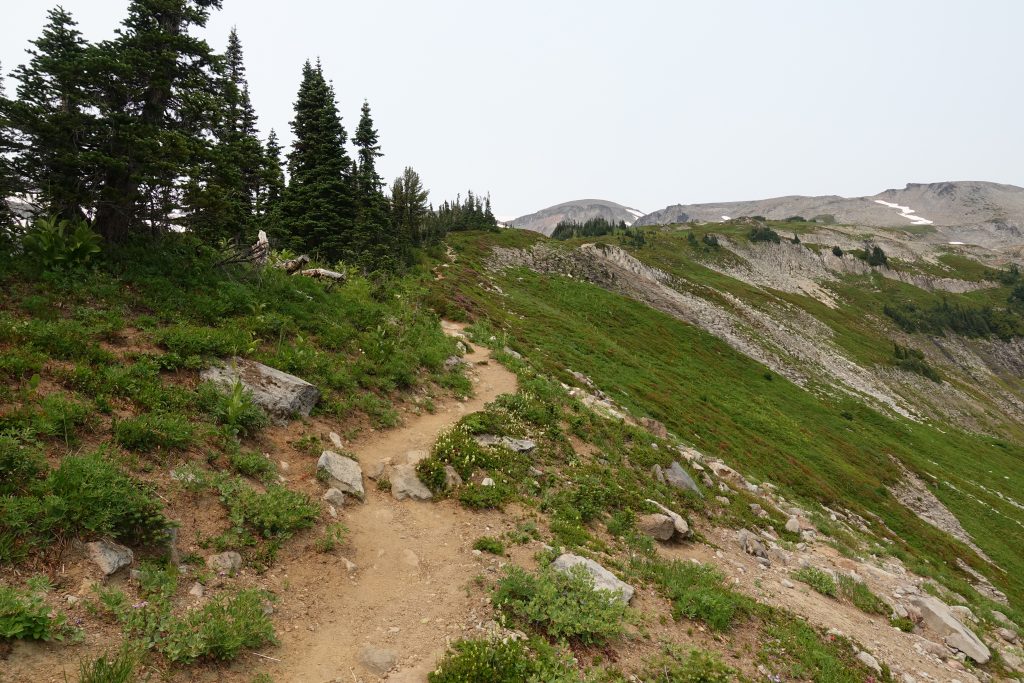 Height of land at Panhandle Pass, 6800 feet.   The highest point on the Wonderland Trail, although not the highest I’d climb.   Felt good, and yet sad.   The area up there was really neat, snowpatches, streams, haze, marmots, the whole thing.   The hike from Nickel Creek to Panhandle Pass is a rought approximation of the entire trip.   Creek crossings, pine forests, upland meadows full of flowers, marmots, steep climbs, and snowfields. 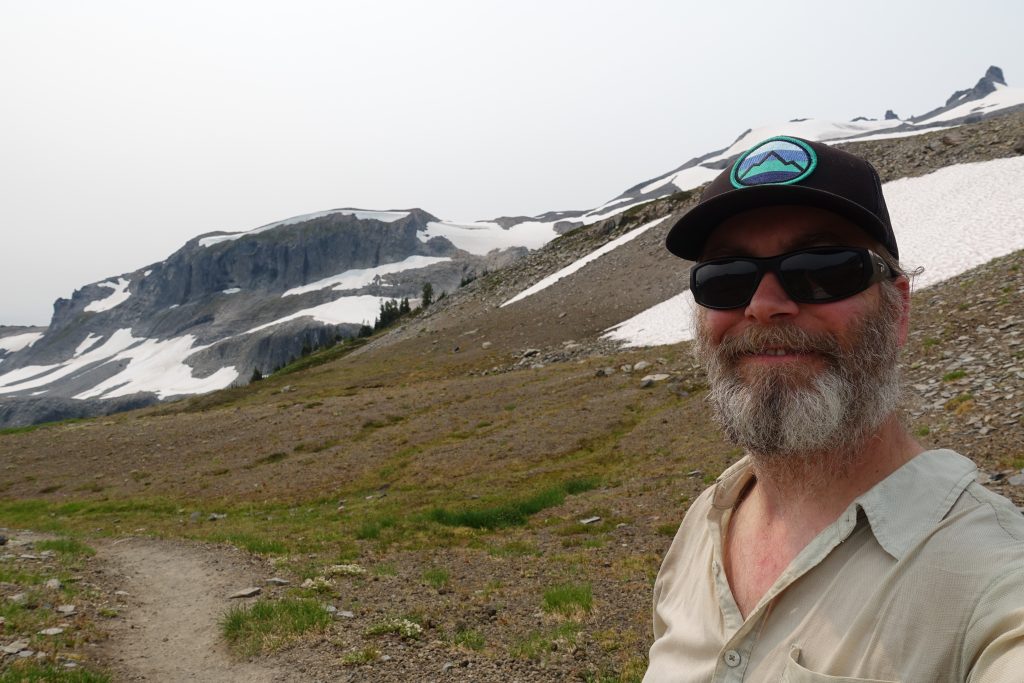 You can tell the season is much shorter up here, everything was sort of … barren.   Green, but just not super fertile. 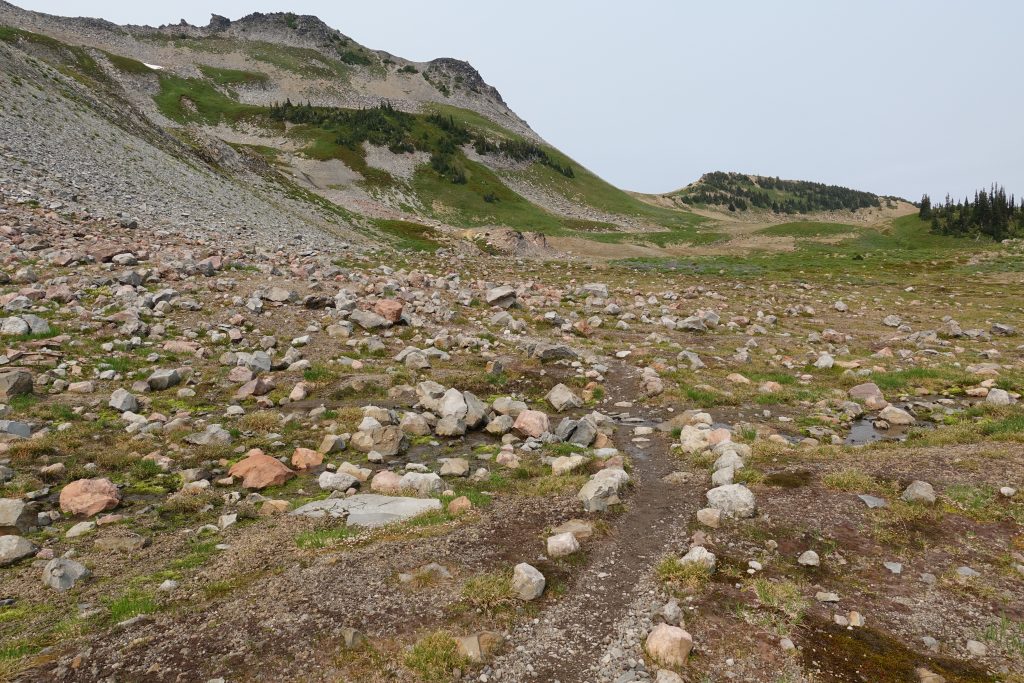 I met a couple of guys going the other way around that I had met at Golden Lakes.   They were doing well, although sunburned and tired looking.   I found out they had packed their entire food load from day 1.   They only had a couple more days to Longmire and were very happy not to carry the weight.

I started running into more hikers, mostly day hikers, but also some people going all the way around.   Some wanted to confirm I was on the Wonderland, as they had dead-reckoned through some unsigned trail junctions and wanted to be sure they were still on the right path.   It’s a good 15 miles from Fryingpan Creek Trailhead down to Box Canyon Trailhead, a good day hike.   If I lived near here, I’d do it. 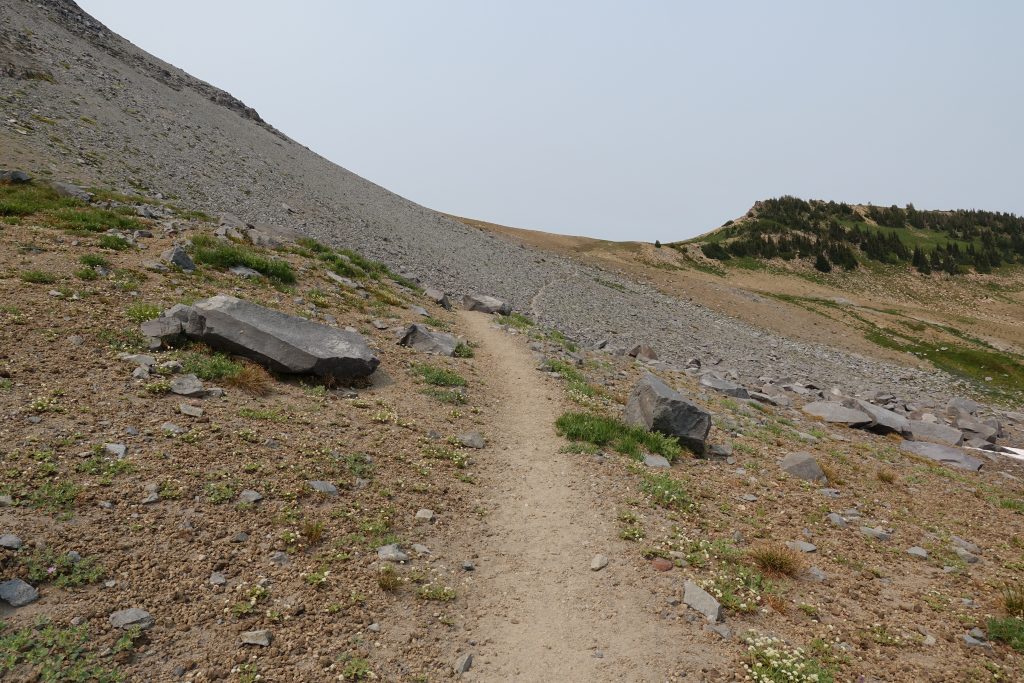 After this saddle things started to get a little weird.   The trail merged with a few herd paths and got much less defined.  I think its under snow most of the year, so the footbed is pretty sandy and loose.   The snowfields were no trouble, slippery from the heat, but hardly difficult.   None were on any great pitch. 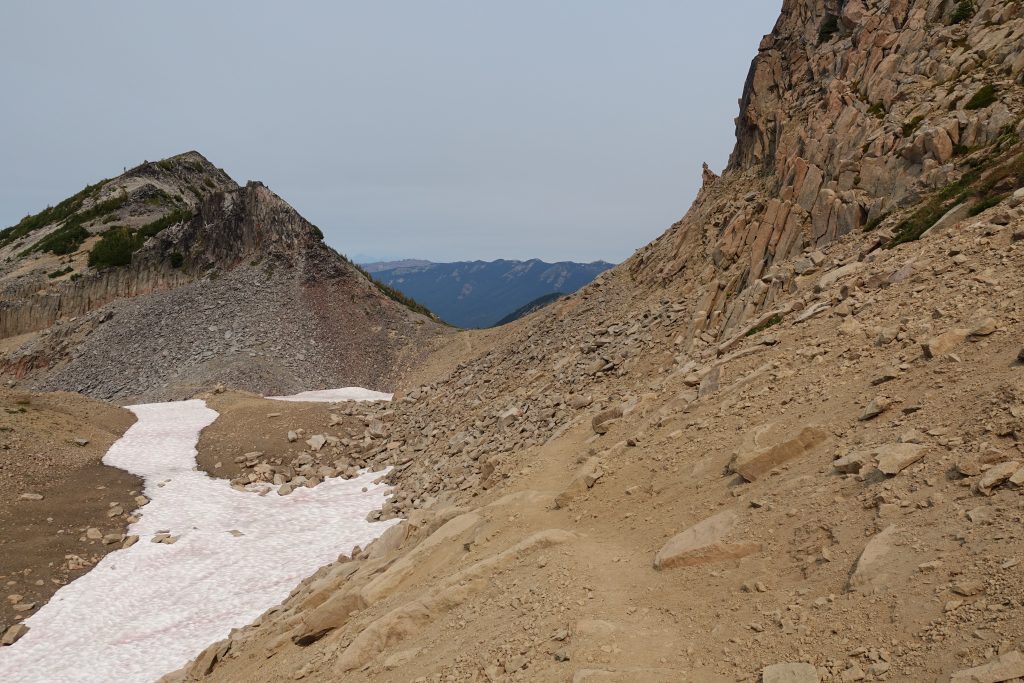 The trail disappeared and reappeard under snow a few times, but if you dead reckon it you can find the path again.   No real harm rock hopping on this stuff if you get off the path. 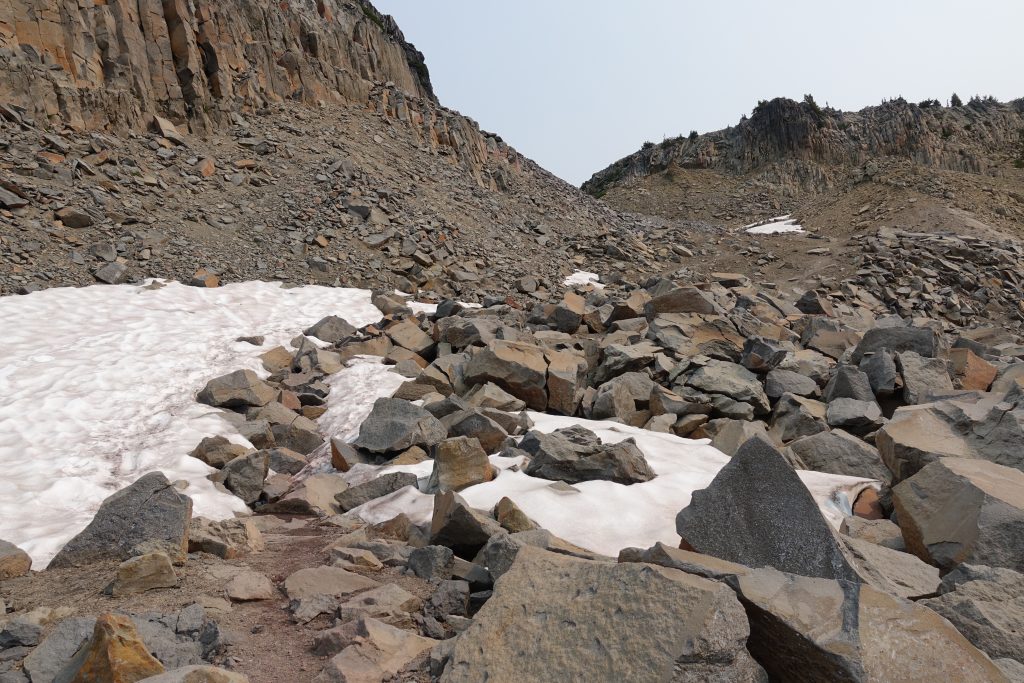 This lake looked a little greener in person.   I went down to it, and was going to swim, but it just looked too cold. 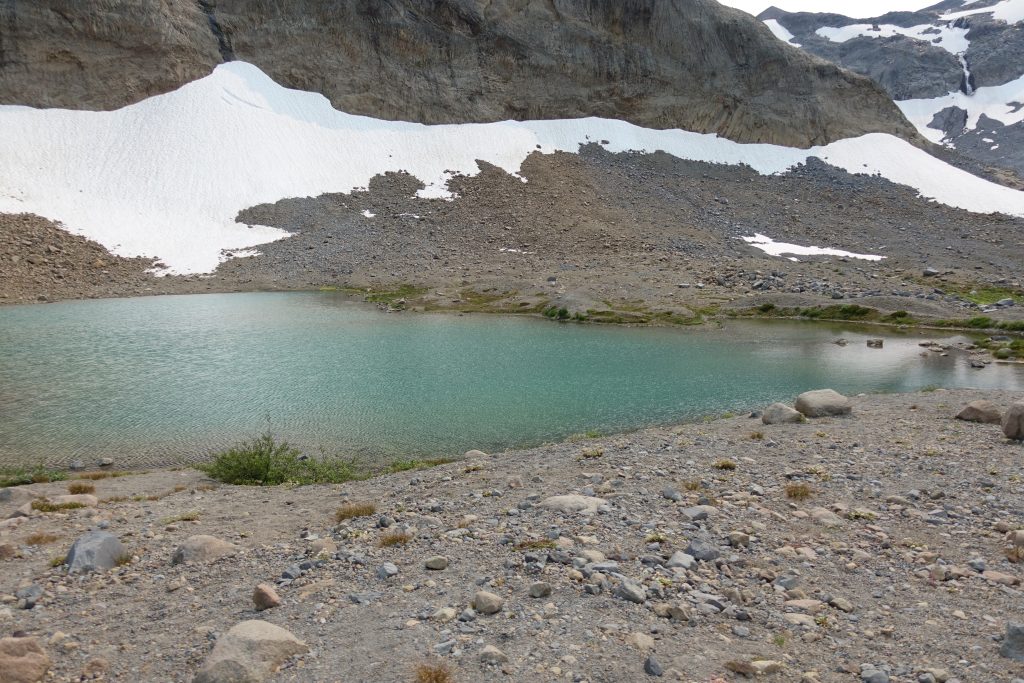 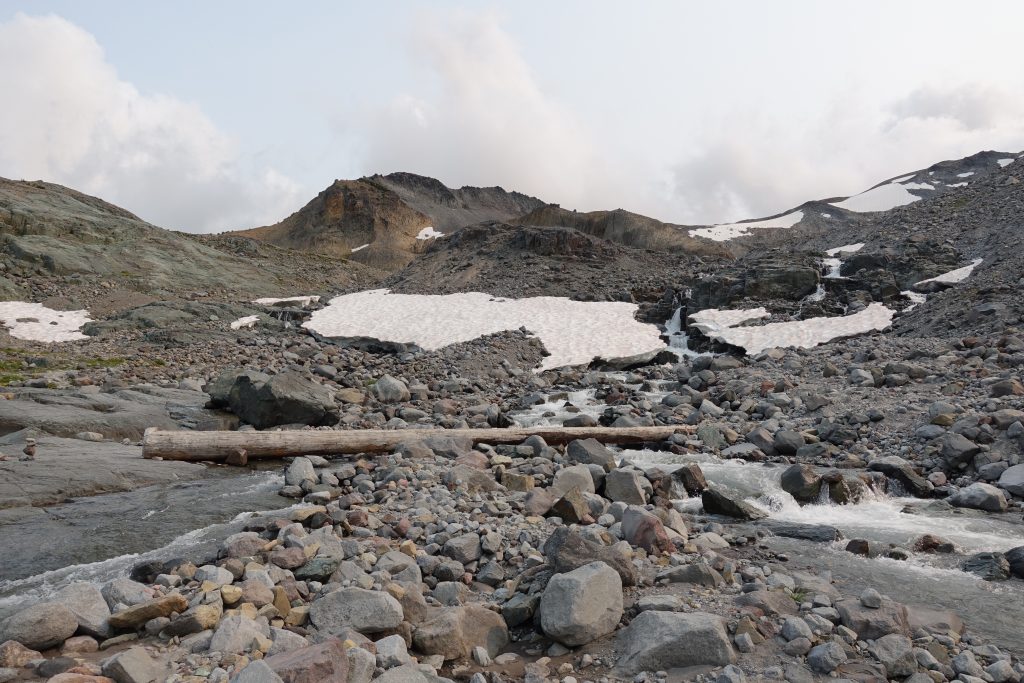 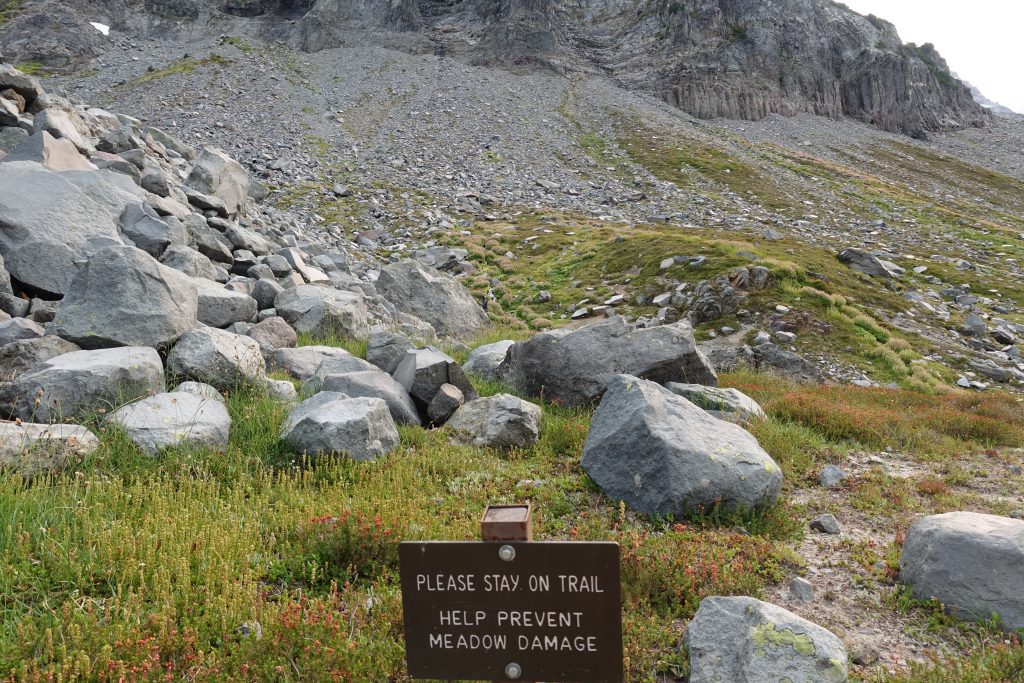 Right after this picture I saw some dingus walking around up the hill with a camera tripod.

I hung out with the people already at Sunrise, including a guy I met at Nickel Creek.   He told me that if you stand basically at the creek crossing, there’s 4G cell signal!   So I made a few calls and texts home to make sure people knew I was alive, and kind of checked in with reality for a few minutes.  I had plenty of power left in my Anker, I figured – why not? 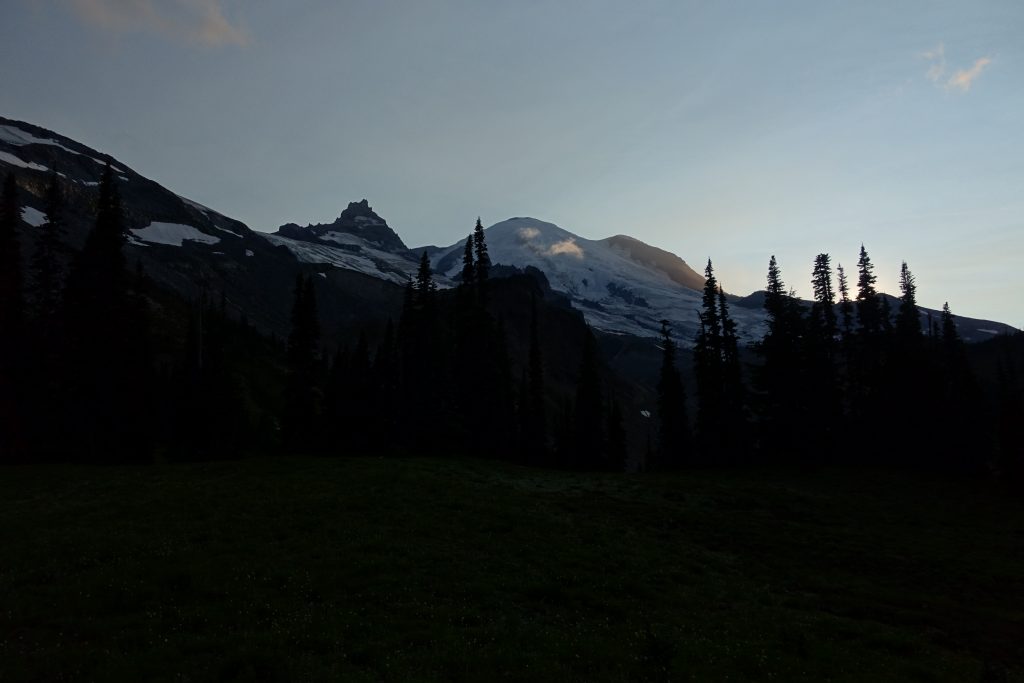 There was a family at the group site, I ran into them when I went to check out the stone building.   Turns out they booked it for 12, and then all but 3 of the family bailed, so they had the whole place to themselves.  The weather was starting to turn and they were kind enough to offer me a place if I needed it.  They were pretty cool, we talked a lot of trail stuff, and the importance of bringing nutritional yeast for your meals.   They were typical kitchen-sink hikers; the woman asked me if my Altras were my camp shoes; she had big leather shitkickers, and her Altras were just for camp.   I nearly fainted at the idea of packing extra shoes.

I got back to my campsite right around 9pm, when a couple rolled in, and asked if they could camp there.   “Because all the other sites are full?”  I asked.   “Yeah, pretty much” they said.   At that point I knew they wanted to camp in my nice, lower, sheltered-from-the-wind-in-case-of-rain site, and not the last remaining, up-on-a-hill-and-exposed site.

But I was in my quilt and had no actual means to stop them.

A slightly rough night, no rain, opened onto a dim, hazy morning that promised rain.   But first, the facilities.    This place was recommended by a friend, partially on the merits of its privy.   it was high tech, lets just say it had a conveyer belt system and leave it at that. 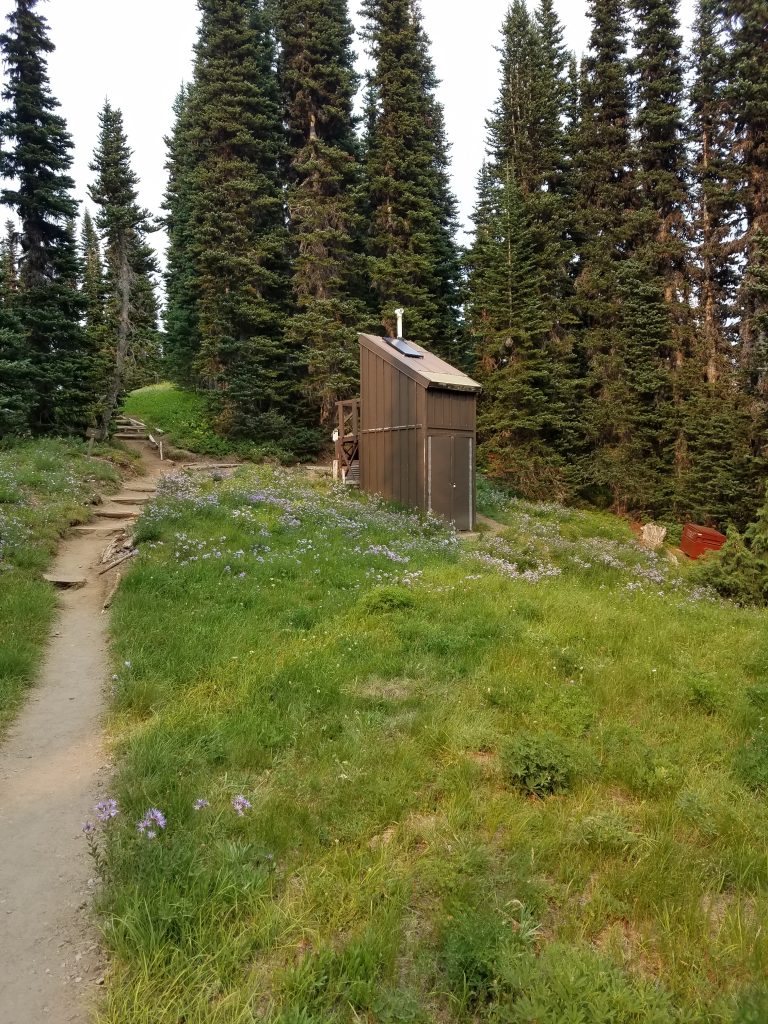