First full day of hiking on the Wonderland Trail. 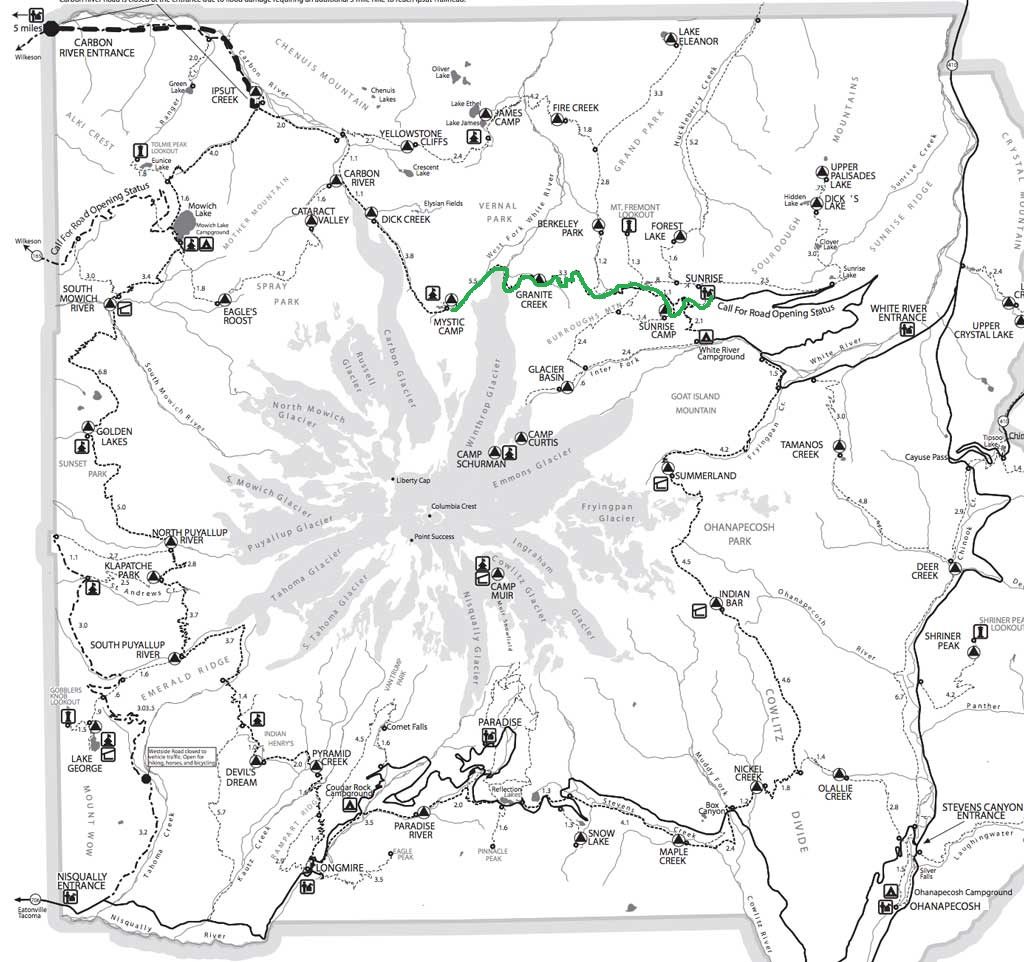 Up at around 6:30 when it got light, and had a leisurely breakfast of PB on a bagel.   I had about 10 miles to go, and it was looking good – a small climb up, some flat, a long climb down, and then a short climb up.   It was time to see how I performed with a 30 lb pack and no training.    First I went down to the lake by Sunrise Camp, and was not disappointed. 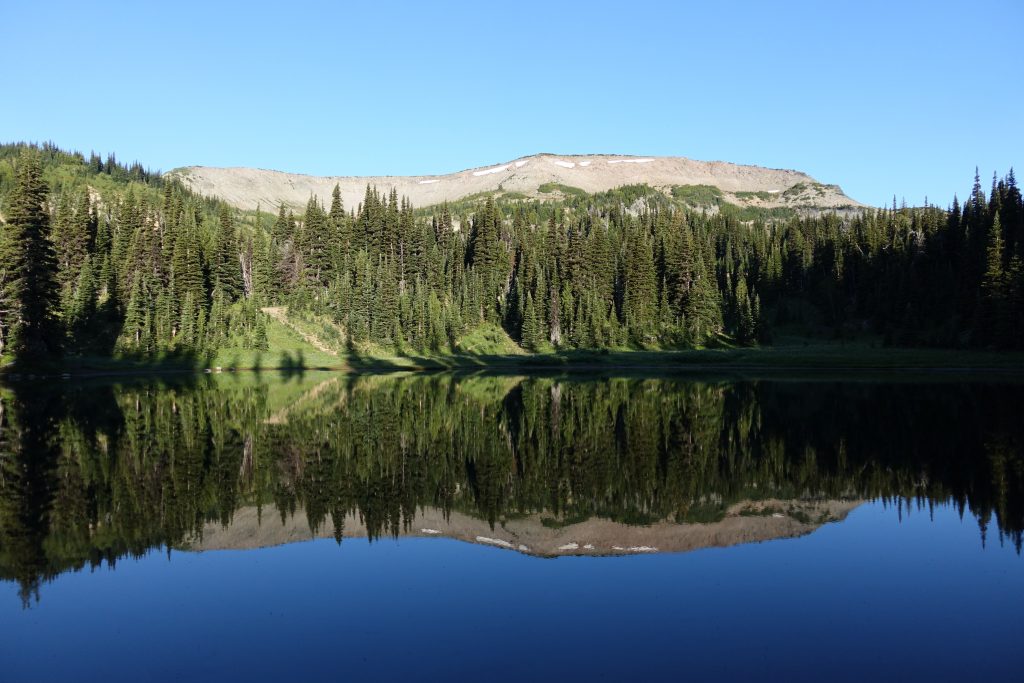 I probably was walking by 8.   I took advantage of the fact that when you’re hiking in a lot of little valleys, half the time you’re in the shade well past dawn.   The morning air was cool and damp, and smelled of strange trees.  It reminded me a lot of my travels on the PCT, there’s a smell to the western forests, maybe its pine, maybe its the lupines, or some combination of them all.    But it was good to be back.   The trails in the park were for the most part sand and pea gravel – not constructed, that’s just the natural soil.   None of the mud and roots and barely covered rocks you get in New England.   No ankle-turners.   You don’t have to stare at your feet the whole time, which is great because you’re not always stuck in the Green Tunnel.

I got up to Frozen Lake about a mile out, and was lucky enough to be there when a big chunk of the overhanging snowbank broke off and crashed into the lake.   This whole area is fenced off, although you can see the foot trail leading up to the Fremont Lookout Tower.   Its fenced primarily because it serves as the water source for the Sunrise Trailhead area, but also because it would be pounded into mud by the sheer volume of people who come to this part of the park.   Lets just say people weren’t watching where they were stepping. 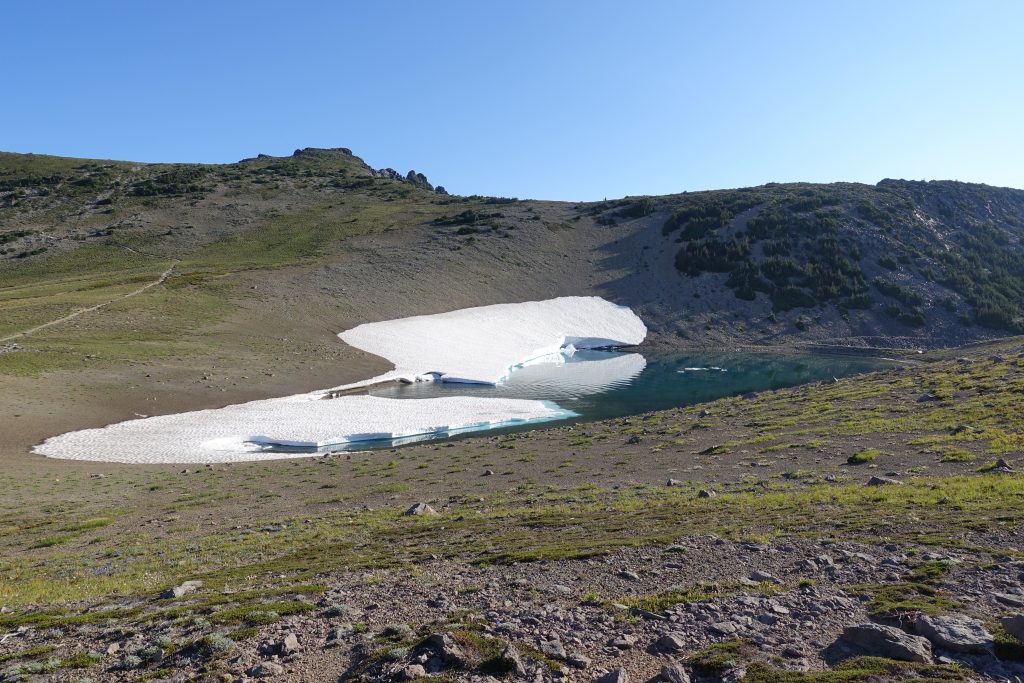 Turning west I put the Mountain on my left and started across a huge open area, through a big saddle and started to wind up to a place called Skyscraper Pass.   On the way I found where a snowfield was feeding a couple of little streams that ran down and across (and under) the trail.   Filled up the water – and drank right from the source, no filter.   It felt good, and slightly dangerous and exotic, especially in this era of hightened focus on germs.  But I lived.   I also did some off-trail scrambling and found a nice little sheltered cirque with a flat, gravelly bottom, probably an ephemeral pond in the Spring.   It would make a great bootleg campsite – up and off the trail, but in enough of a small depression that you’d be shielded from everyone. 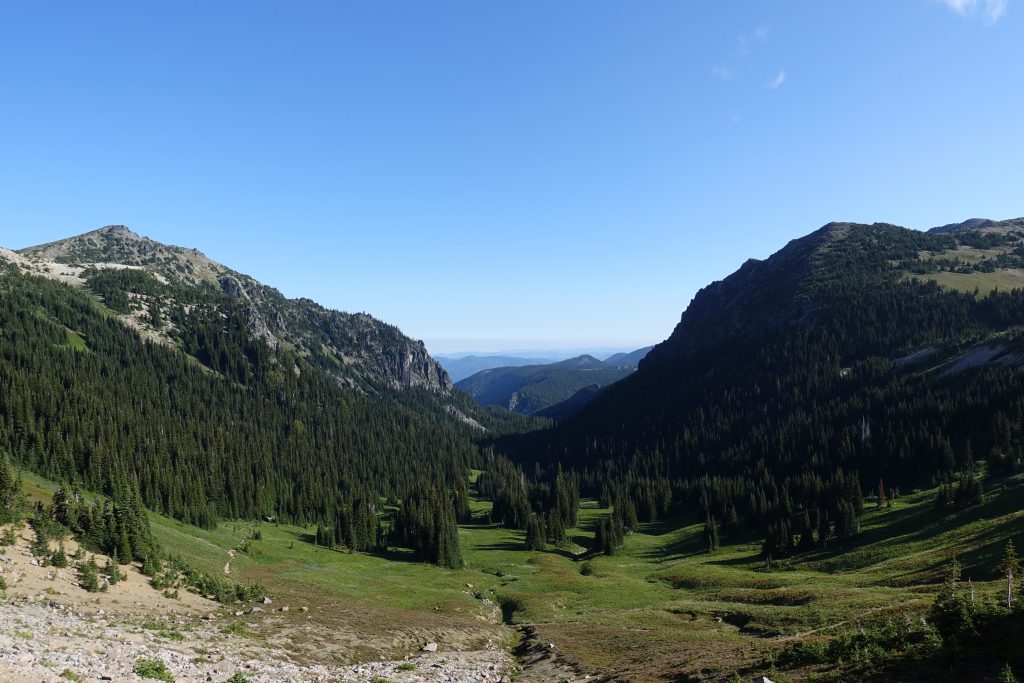 It’s important to turn around and look backwards – most of the time you’re so focused on the ground in front that you miss good views. 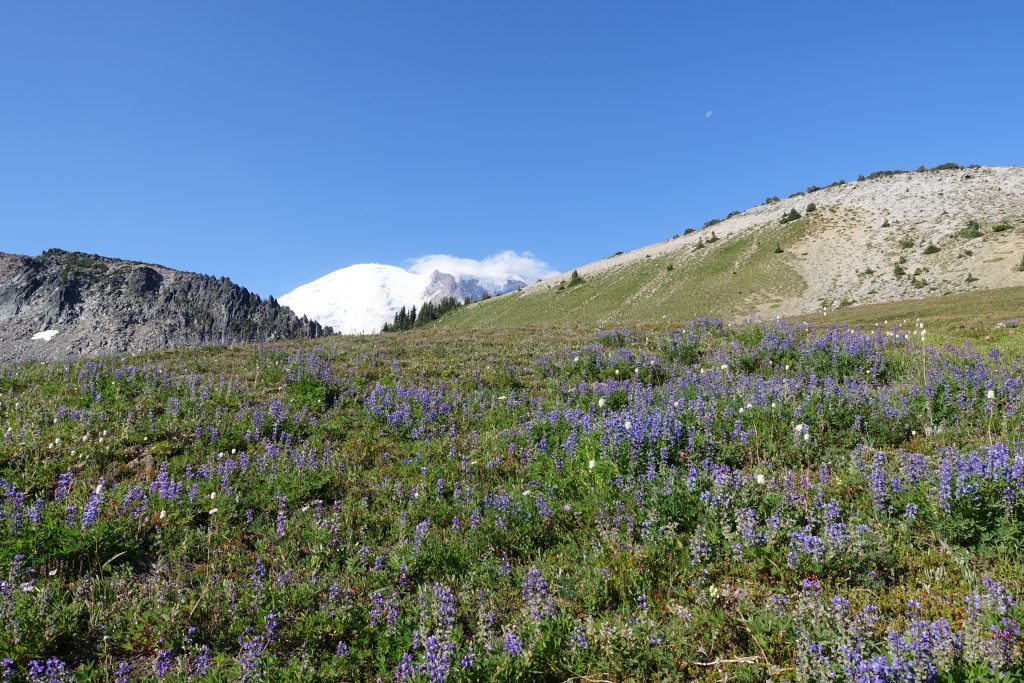 At Skyscraper Pass there’s a side trail that goes up another 500 feet or so to Skyscraper Peak.   I had time, I had fresh legs, and how often do you get to climb something called Skyscraper Peak?   So I went up it.   Plus it was an opportunity to break 7000 feet.    After a short grind up what might be literally a goat path, I reached the top, where I was besieged by flying ants.   Or some similar gross bug.   A quick drink of water and I hustled back down.

The nice part about getting to a pass is that afterwards you get to head back down.   You’ve converted the chemical potential energy from breakfast into kinetic energy while you walked, and converted that to gravitational potential energy by climbing.   Now you get to convert your potential energy to back kinetic.  It’s not quite like putting your car in neutral going down a hill, but it’s close.  Before long I was back down in the trees at Granite Creek.   At the creek crossing I refilled the water bottle and dipped my feet in the water.   The water is snowmelt, so you only need to soak your feet for a few seconds.   It was shady, and there was a seat, so I had lunch.   Plus I was roughly at the halfway mark, and only needed to do 5 more miles in the next 8 hours, so I had plenty of time.   While I was waiting I ran into two hikers going clockwise, a mother and daughter duo.    This was the kid’s first overnight backpacking trip, which I thought was pretty sweet.   They even got to ford the Mowich River, because the bridge was out.   How many 12 year olds get to do something like that? 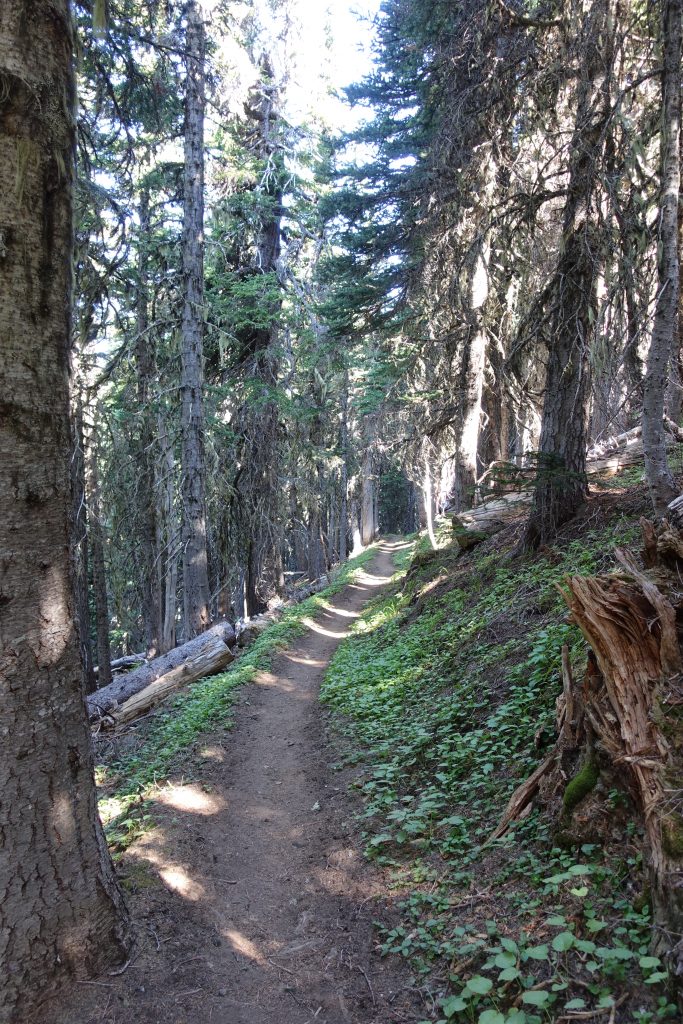 After the creek the trail bounced up and down a little before making its final, long descent down the Winthrop Glacier valley.    I discovered that glaciers are very dirty.   Up high of course there’s the river of cracked blue ice on the mountain side, but down below, it’s more like a giant snowbank you see in a mall parking lot in April.   As the glacier slides down the mountain, it dislodges lots of rock and sand off the mountain.  In fact if you sit and watch the mountain, you can hear, and see, rockslides with regularity.    By the time you reach the terminus of the glacier, it’s completely encrusted with dirt and rubble.    In the picture below, what looks like grey rock is actually exposed ice, while all the reddish dirt and rock is a thick layer of crud on top of the ice.

Out of the bottom comes a gushing river of meltwater, like cheap chocolate milk or bad coffee in color, and much too silty to drink.   You don’t even want to try and filter it, since it will clog your filter in no time.    Down at the bottom where I crossed, I found a snowmelt stream feeding into the Winthrop River, and bathed in that. 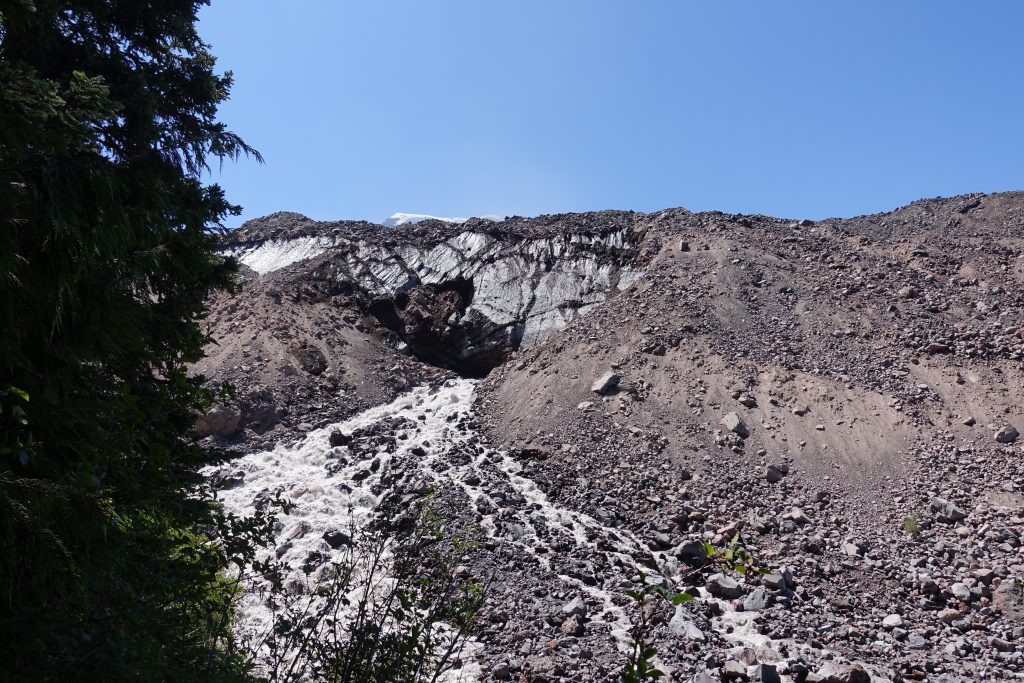 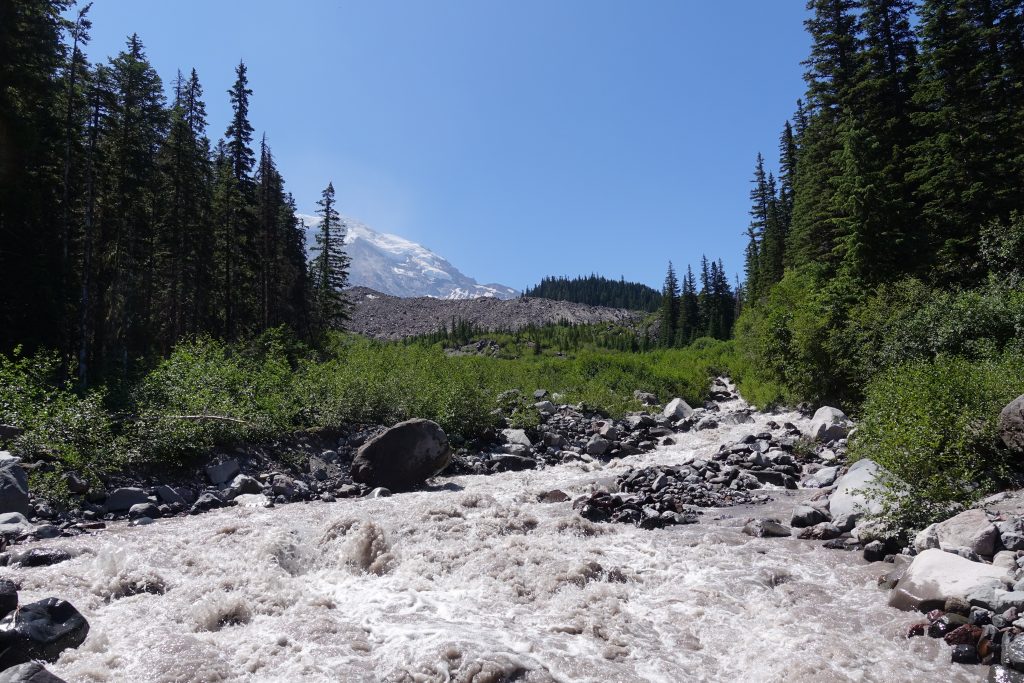 By now the sun was at full power, and it was an uphill scramble up lava rocks.   You know those reddish rocks you put in your grill to make the heat more even?    Basically that was the trail, and the rocks had been simmering in the sun all day.   Hot.   Still, the trail levelled off and went through some well-maintained areas.   In some places the footbed was a fine grey sand, almost beach-like, which worked its way into my shoes. 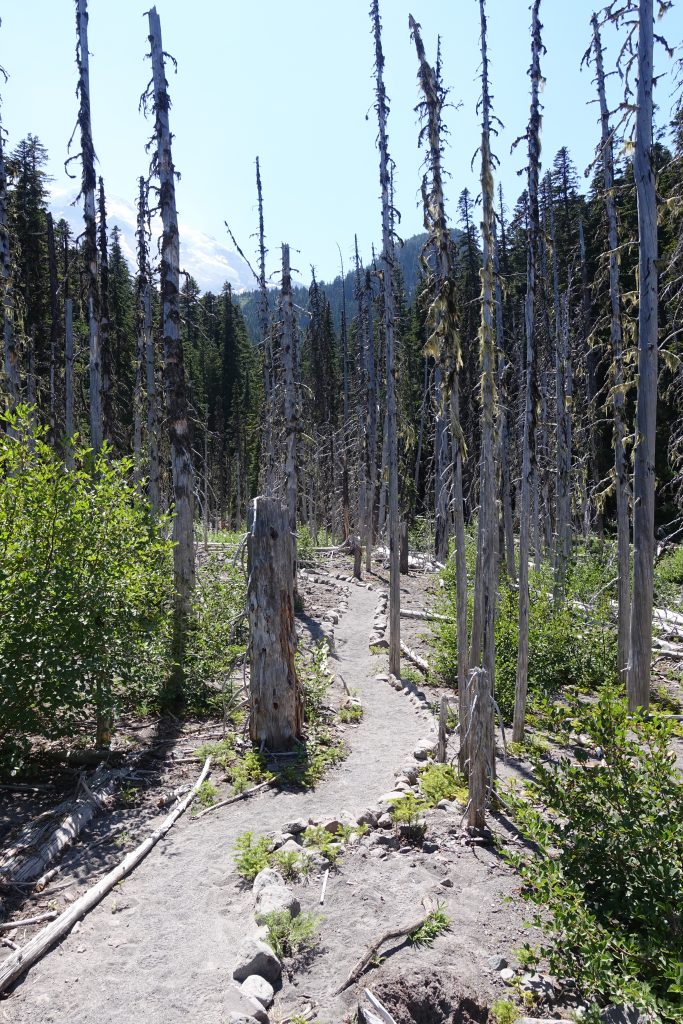 A few hours later I reached the Mystic Lake campsite.   Nothing special, a half-dozen well drained and well maintained sites, a bear pole, and a thunderbox.   A thunderbox is a wooden box, around the size of a large desk, with a toilet seat attached to the top.    That’s right, no walls.  You sit on a box in the woods.   Tradition dictates that you place your trekking pole across the access path so that nobody comes up on you while you’re in the middle of something.   Once everything was sorted and the food hung, the next item on the agenda was the lake.   Another 1/6 of a mile up the trail there was a kind of beach area.

I was lucky to arrive before anyone else, so off came the clothes, and into the water I went.   The lake’s shallow at the near end so the water was nice and warm, but quickly chilled as it got deeper.   There was also a pretty hard thermocline; if you swam out and then lowered your feet to tread water you really felt the cold.   After a handful of minutes I felt neither hot nor gross, so I snuck ashore before someone showed up.   Because I always pack my shemagh, I had something to dry off with. 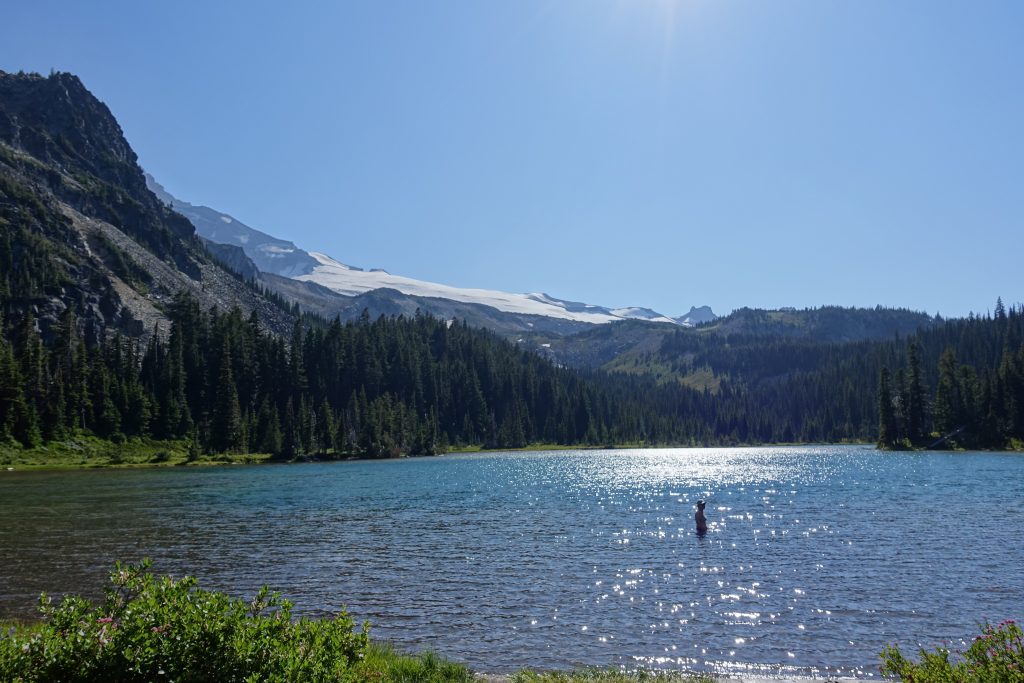 Back at Granite Creek I had met a trio of hikers who were on the same schedule and direction as me.   Before long they showed up, and we all had dinner at the lake.   I’m not sure if it was the sound of people, or the smell of food, or the heat, but a rather unafraid bear came down and went for a swim.   Despite all the shouting and ‘hey bear!’ he moseyed into the water, swam around for a while, crossed the lake, and went on about his business.   Despite his brown color, he was just a black bear, so nobody was particularly worried.   Out west they call them “cinammon bears” when they’re brownish colored.  The person next to the bear is wearing tan pants; you’re not looking at someone’s butt here. 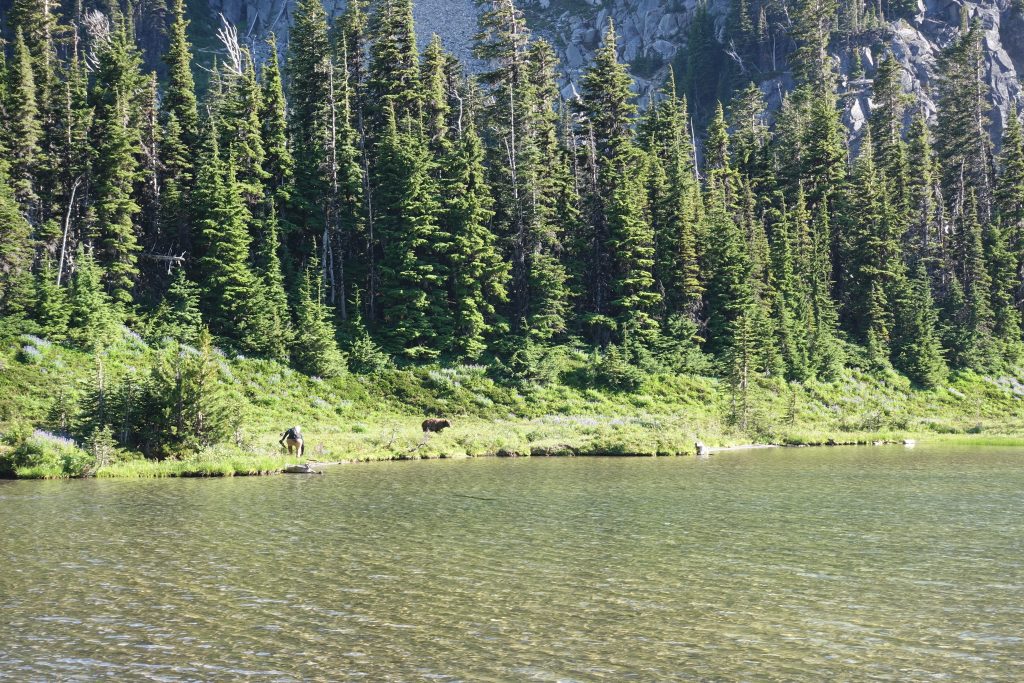 The day’s drama over, I returned to the campsite where I again cowboy-camped, and where again by dark the mosquitoes quieted down.   Either that or I fell asleep and didn’t detect them.   But the next day I woke up fine, neither covered in bites nor dessicated from blood loss, so I’m pretty sure the bugs just went away.