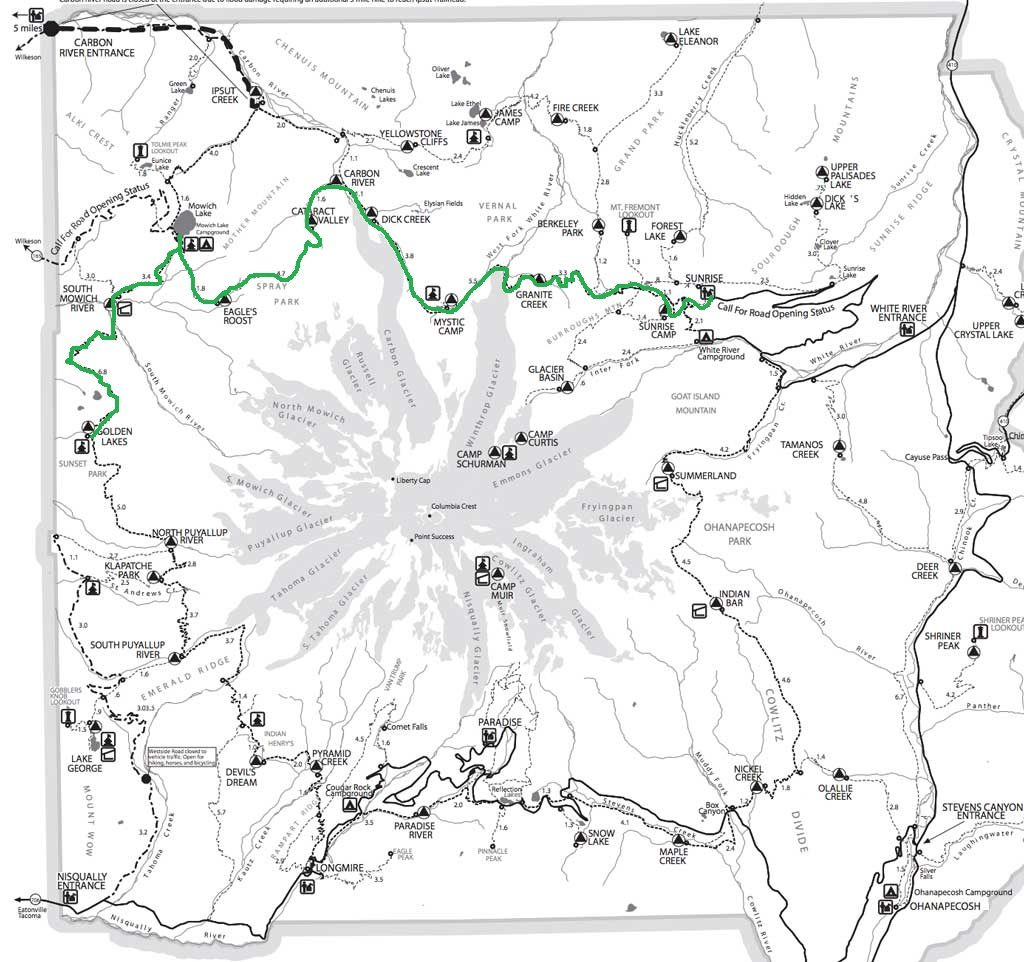 Someone said it was an easy walk from Eagle’s Roost / Spray Falls down to Mowich Lake.   And they were mostly right.   I was eager to get going, the prospect of a proper toilet and AC power spurred me on.   It was a bit of up and down, and then a 0.2 mile side trail to the actual campground.   Which was a parking lot.   There was a loop of dirt road, surrounded by tents pitched on gravel.   Not quite the saddest campsite ever, I think that still goes to the RV park outside London I slept in once, with highway sounds all night.   Turns out there was no ranger station, just an empty patrol cabin.   Mowich is one of the places that you can cache food, assuming you have transportation.   People hiking all or part of the trail will often leave a big plastic bucket of food at stops strategically around the way, so you don’t have to pack 9 days of food.   That said, I did meet a couple of guys who were doing just that.   Poor bastards. 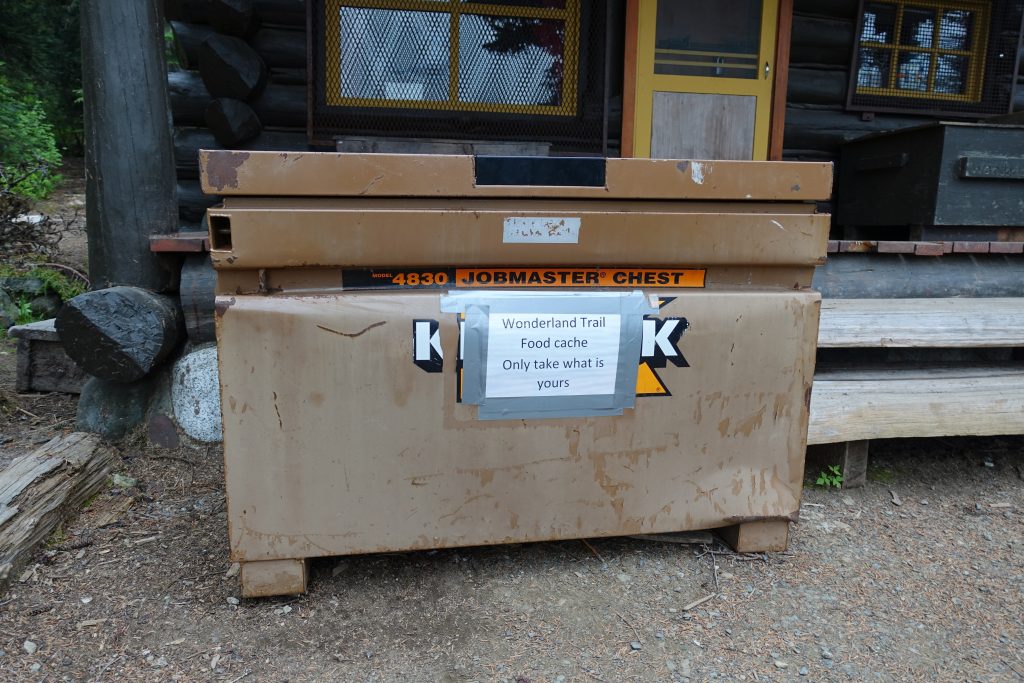 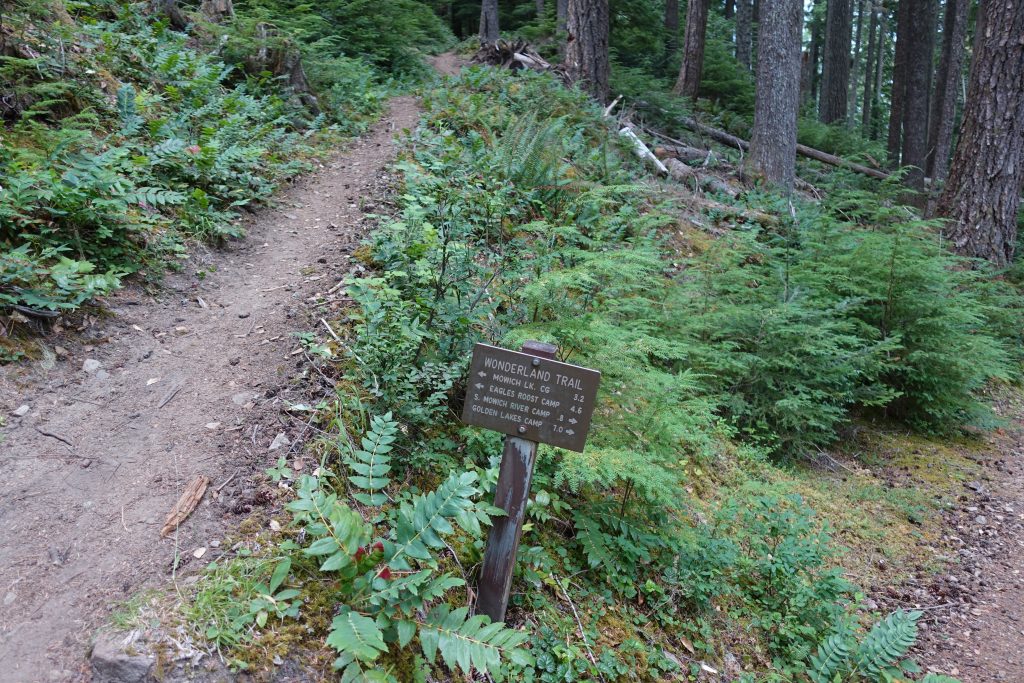 The area leading up to and then away from the campground was pretty easy.   Good, well made footbed, and monster trees. 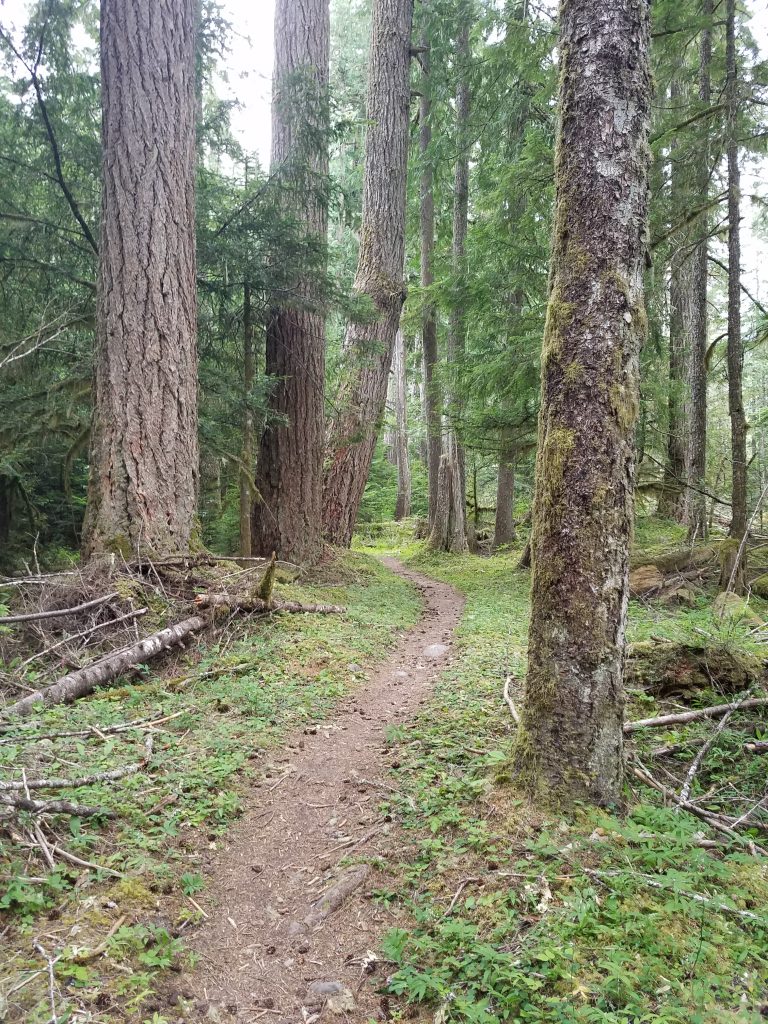 Soon the trail started down a long set of good switchbacks as it descended into the Mowich Glacier valley.   This was The River everyone’s talking about.  On the way there I met a woman who had arrived mid-afternoon the previous day, and was forced to camp on the far side as it wasn’t fordable.   When I got there at around 10am, it wasn’t too bad, but you could clearly see all the wet muddy area around the river that had been underwater the day before.   Not a good place to try and cross.   Trail rumor said there was a decent place 0.2 miles upstream, but I went up at least half that and never found a spot better than any other.   While going up and down looking for the easiest spot, I kept seeing a woman across the river in the trees.   I thought she had just crossed, which was a bummer because its always easier to go with two.   What I discovered after I had crossed (5 separate streams, up over my knees), was that she had spent an hour already trying to find a good spot to cross.

I had made it over, so I dumped my pack and we crossed back across together.  I didn’t find it that hard, there were a few spots where the water splashed up to crotch high.   As she pointed out, that was nearly chest high on her.   I could see why she had waited.   I’ve never done a ford like that myself.   In the streams you could hear the rocks rolling around, and it was the kind of water that pushes you downriver every time you lift a foot, and where you can’t walk against the current.   My trekking poles were shaking like crazy from the current.  And of course after the first few steps, your feet are numb because this water was a glacier less than an hour ago.  But in the end we got across, although she almost went in the drink once.

It was small consolation later to find out that they installed the bridge the next day. 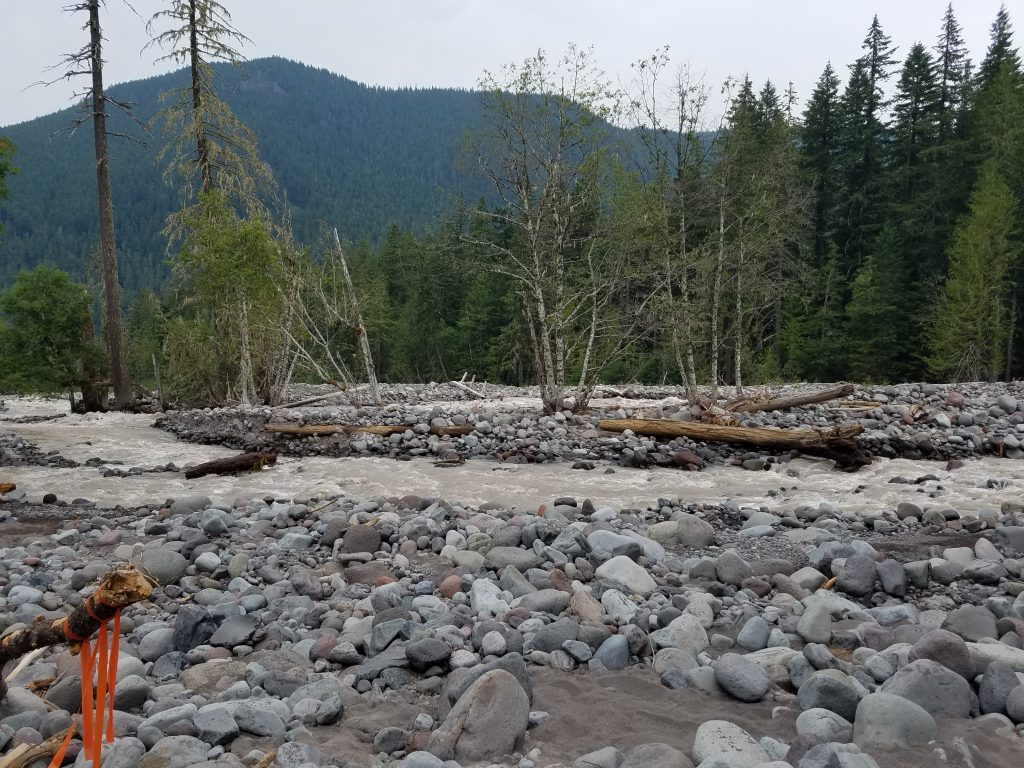 Since the river is by definition in the lowest part of the valley, now I had to climb.    But first, lunch and rinsing out of sneakers and drying of socks.   It was much steeper than this. 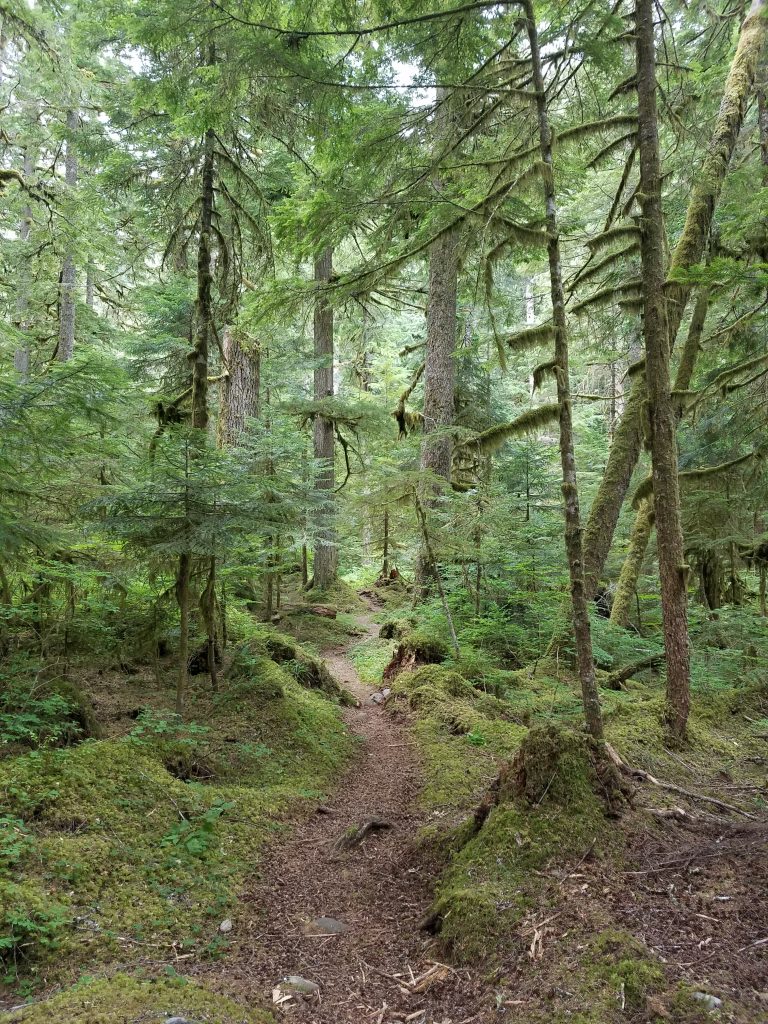 Closer to this.   But for a few miles. 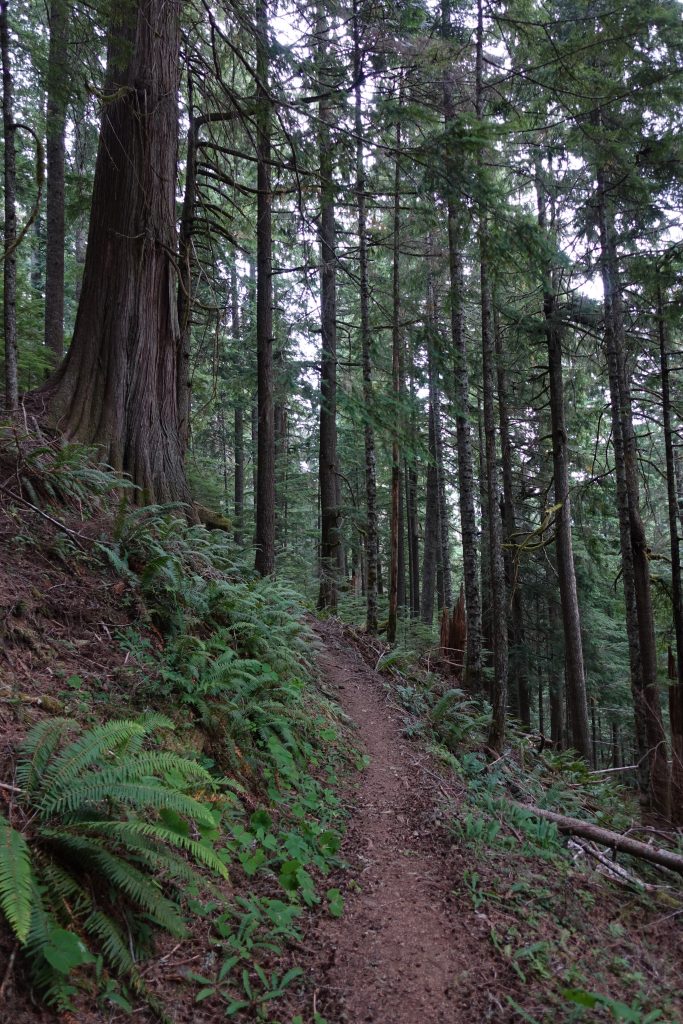 Once I crested the ridge, I got my reward.  There were so many blueberries and huckleberries on this south-facing ridge that I got sick of eating them.   Not sick-sick, just to the point where the thought of another handful of huckleberries was totally unappetizing. 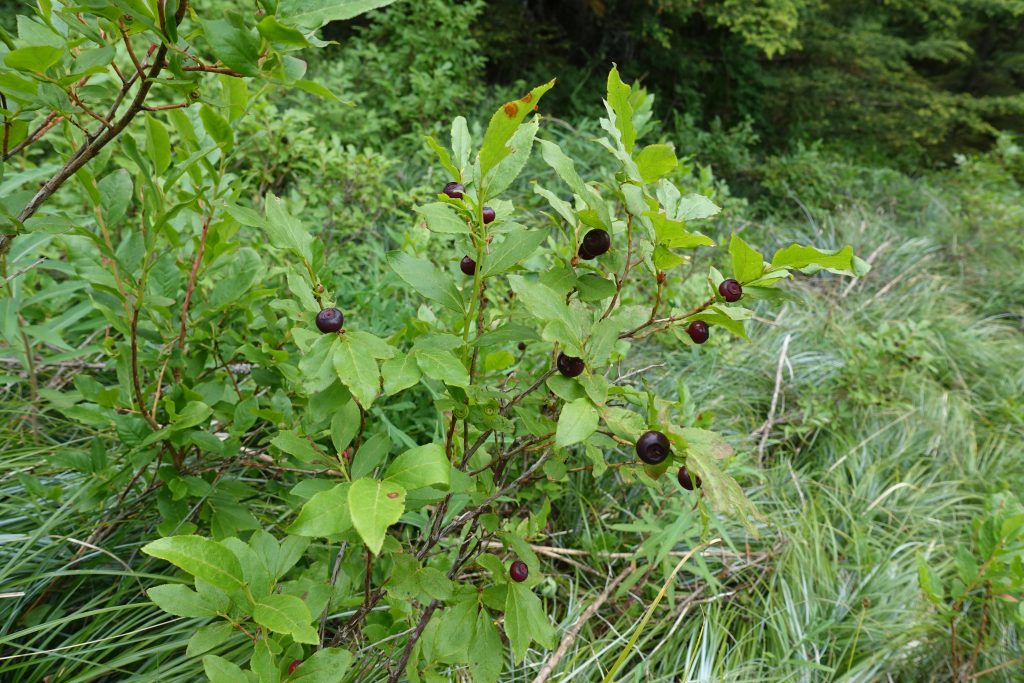 The day had started to haze in from the fires, and cloud cover was solid, so I hurried on, mostly flat from the ridgetop to the camp.

Just past the patrol cabin a path lead to the water.   First water was the shallow, mucky end of the lake.  Another 60 feet to a rock outcropping and the shore dropped off immediately to waist deep.   More clear, cool water?  More skinny-dipping please.   Rinsed the socks and shirt, and donned the shemagh against the bugs.   It was nice to be cool and not covered in sweat and grime.   At least for 10 minutes. 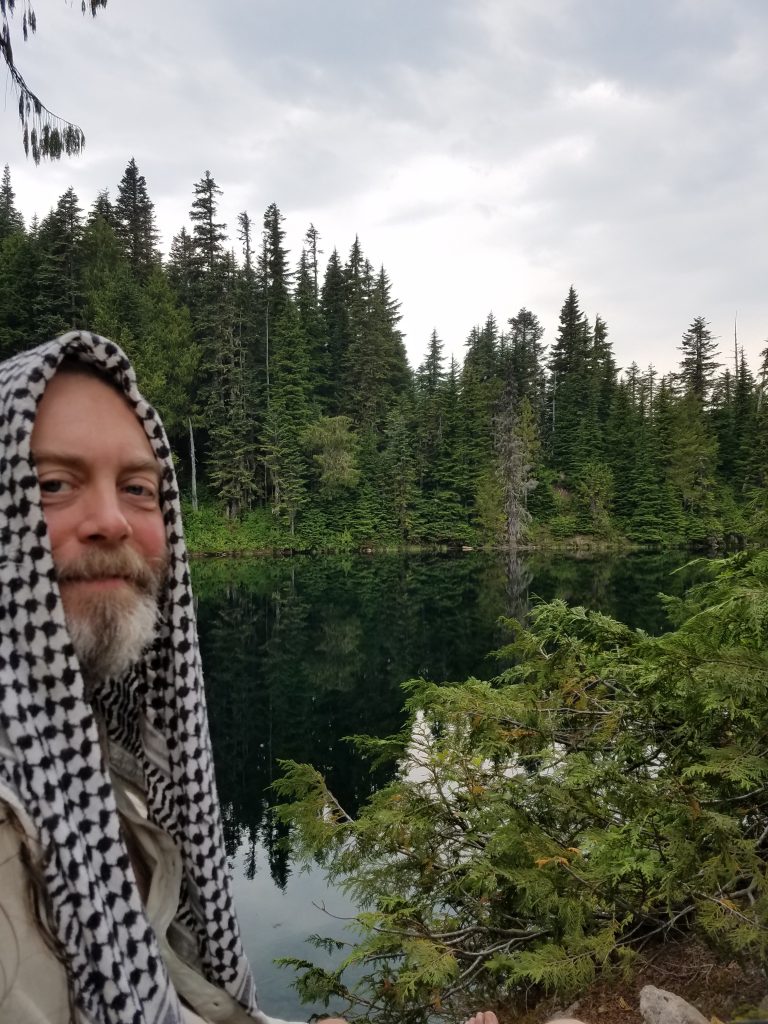 The mark of civilization – a chair.   On the PCT, when I got to the visitor center at Carson Pass they offered me soda and fruit.   I said I would rather have a glass of water and a chair.   I cooked and ate dinner on the porch, because I could.   It also spared me a 10 minute sprinkle we got.   Later I set up my campsite and pitched the tarp, just in case.   While setting up, what seemed like an entire mouse colony was racing around the campsite area, jumping over things and each other.   I feared that the night would suck, either rain or having to lay there under siege.     But no rain, and no mice. 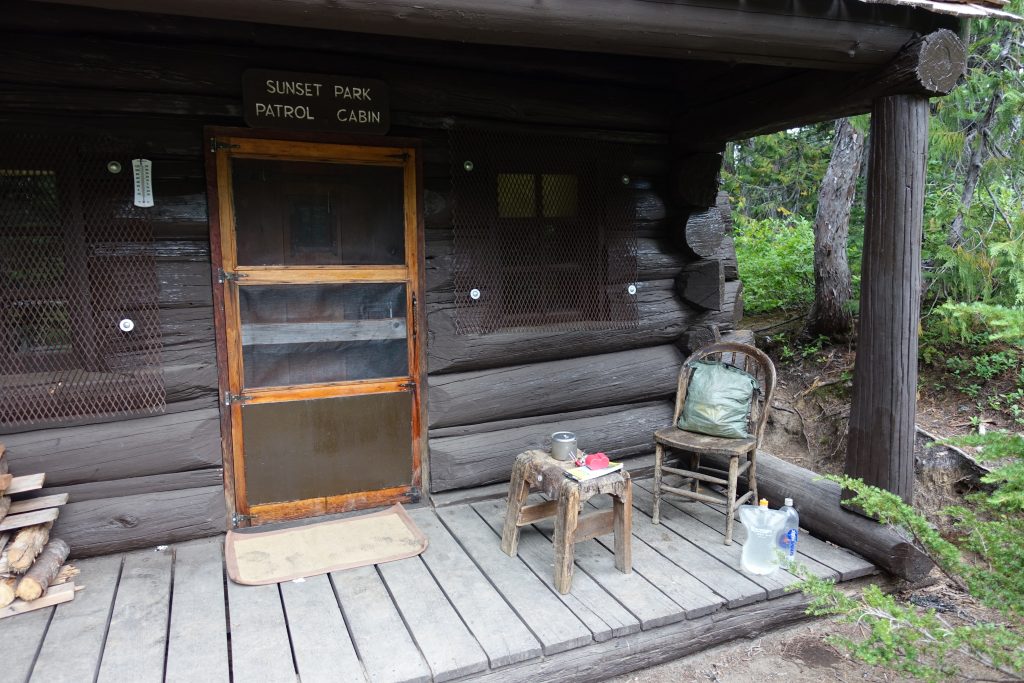