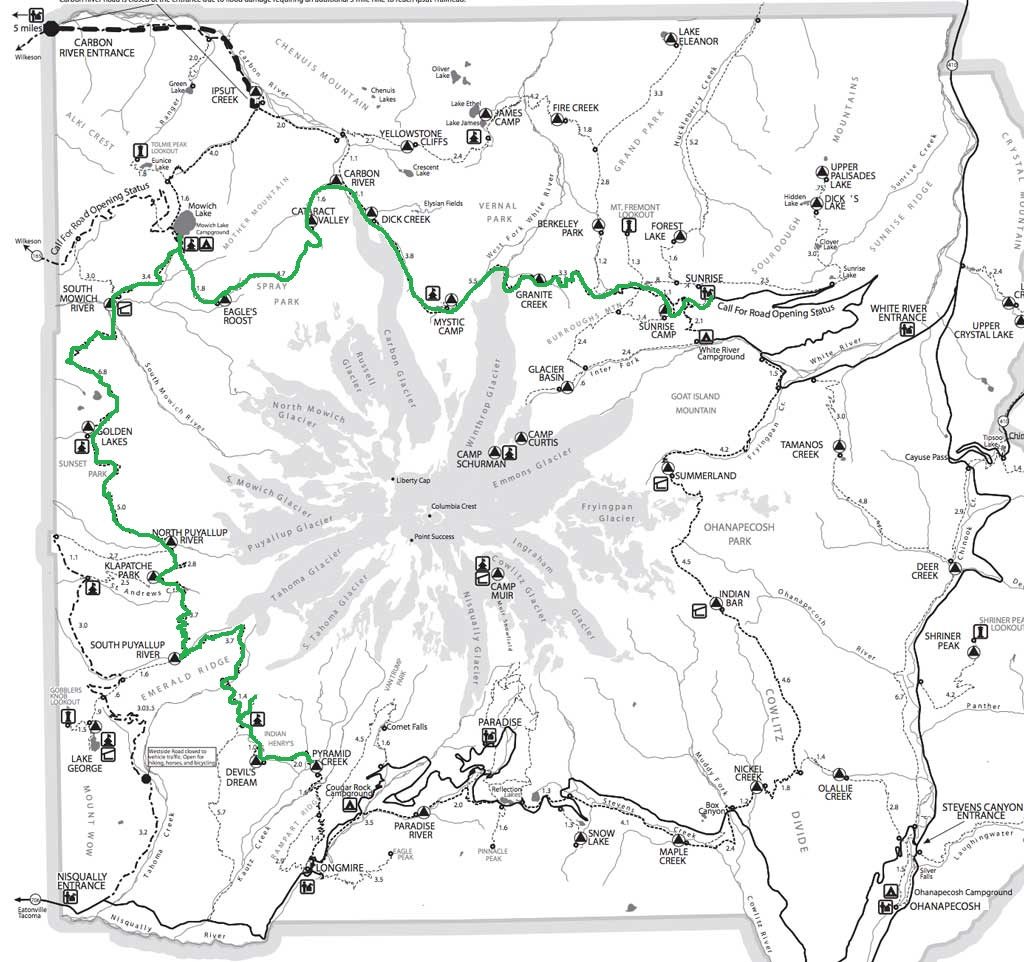 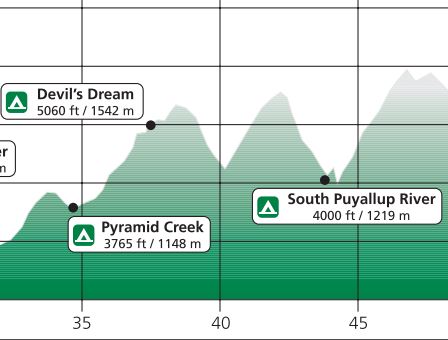 This was the first of two easy days, and by easy I mean only around 8 miles.   Because you have to camp at designated sites, and because I was picking up a maildrop in Longmire Village, I had to time things right.  Both days really allowed me to relax and enjoy the Park as a destination, rather than a journey.   With only a few thousand foot climbs today, and the last half of the day all downhill, I was in no hurry.

Houses of the Holy

At the S. Puyallup River Camp, the toilet is .1 miles down the trail, past something called The Colonnade.   It’s a big columnar basalt formation, where just the right lava cooled at just the right temperature to form these hexagonal columns.   It was similar to the Devil’s Postpile a few miles north of Mammoth on the PCT. 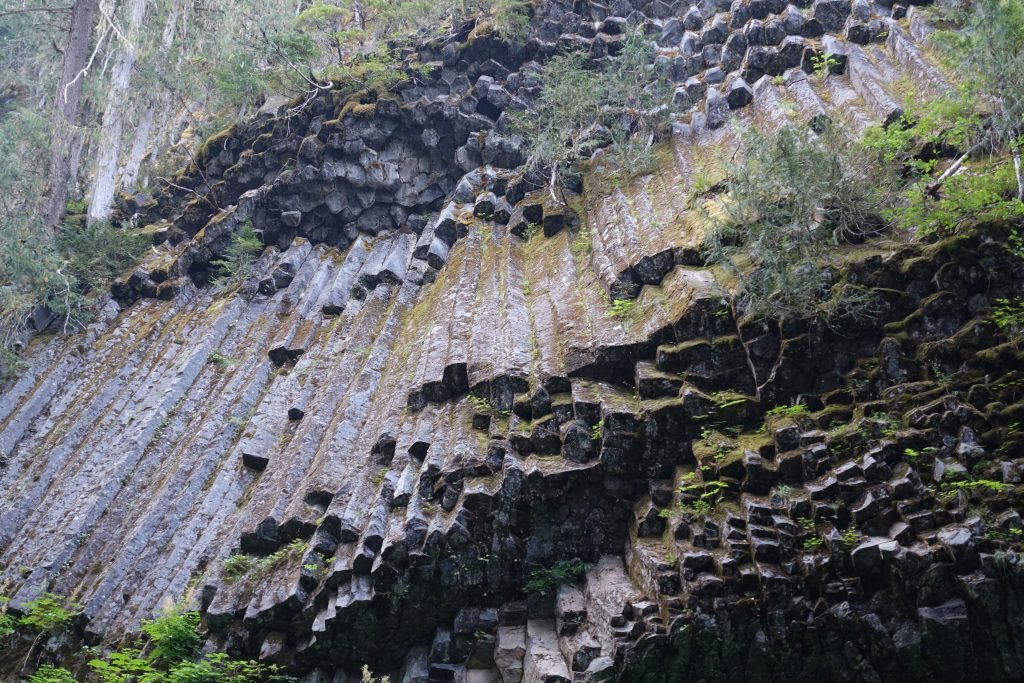 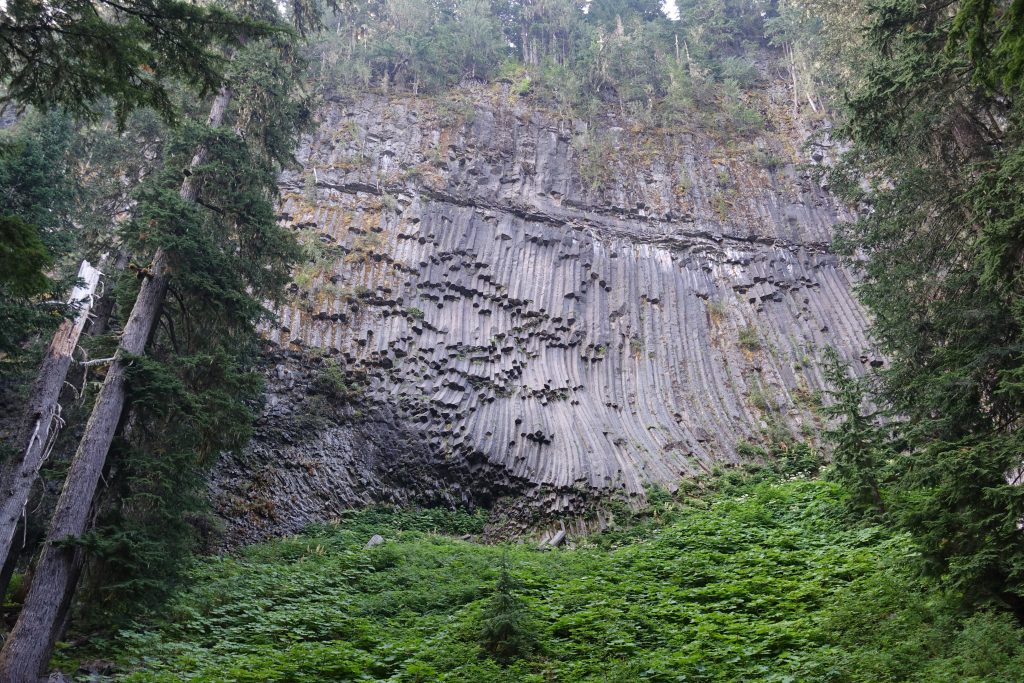 Cool stuff.  I took my time to enjoy the morning, stroll around, and talk to people.  I bumped into a guy who had spent the night 1 site over and left early, only to reappear after an hour.   He had taken the spur trail back to the Wonderland, then gone down the side trail.   Once he realized he was still descending AND he couldn’t even hear the river anymore, he knew he was way lost.   From Texas, he was impressed by the hills.   We talked hiking and trail names came up.   He mentioned he didn’t have one, but perhaps “Wrong Way” was appropriate – so I dubbed him, “Wrong Way”.

I took advantage of the sun staying below the eastern ridgeline for a while and managed to hike up the valley along the Tahoma, popping out into the sun on Emerald Ridge at the end in an amazing high meadow, complete with lupines and marmots, and A Nice View. 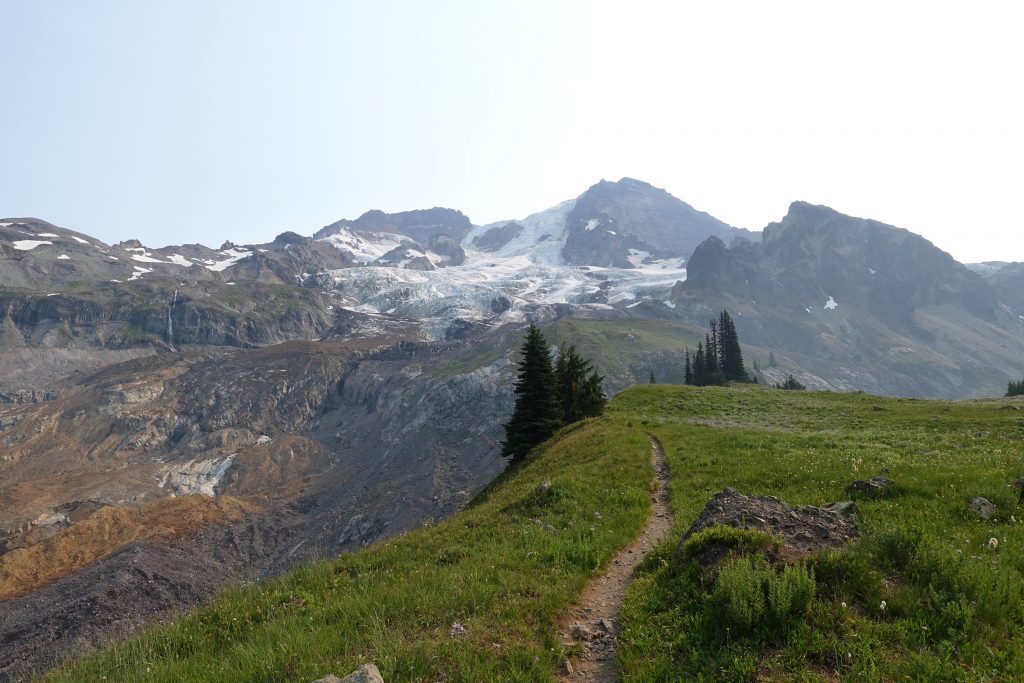 I spent a lot of time up here for second breakfast, watching the marmots, and wishing for enough breeze to blow both the haze and bugs away.   Despite the lack of wind, there’s the constant background noise of all the waterfalls pouring out of the glacier as it withered in the summer heatwave.

From here the trail wound down along the lateral morraine of the glacier, through the valley I later described to hikers as “like walking on the Moon”.   All crushed and powdered rock, and a variety of browns and greys.   Folks coming up the trail warned me of a bear nearby, but sadly, no sightings.   I met a group of trail runners/walkers, all doing some 20+ mile loop.   They were typical runnerbros, who treat the outdoors as their personal gymnasium and hiking as their endurance sport, so I proceeded to pick up the bottlecaps and other microtrash they left in their wake.

Down, down, down, in the blink of an eye back into old growth pines, and eventually arriving at the Tahoma River right around lunch.    Since it was hot, and this side of the river was in the shade, it was a great spot for lunch.   I met a group of older hikers coming the other way, and after some drama and applause as they each managed to make it across the river, they sat down for a rest and a chat as well.   One thing that was nice on this trail is that there was a big mix of ages, it’s not just for the 20-something crowd. 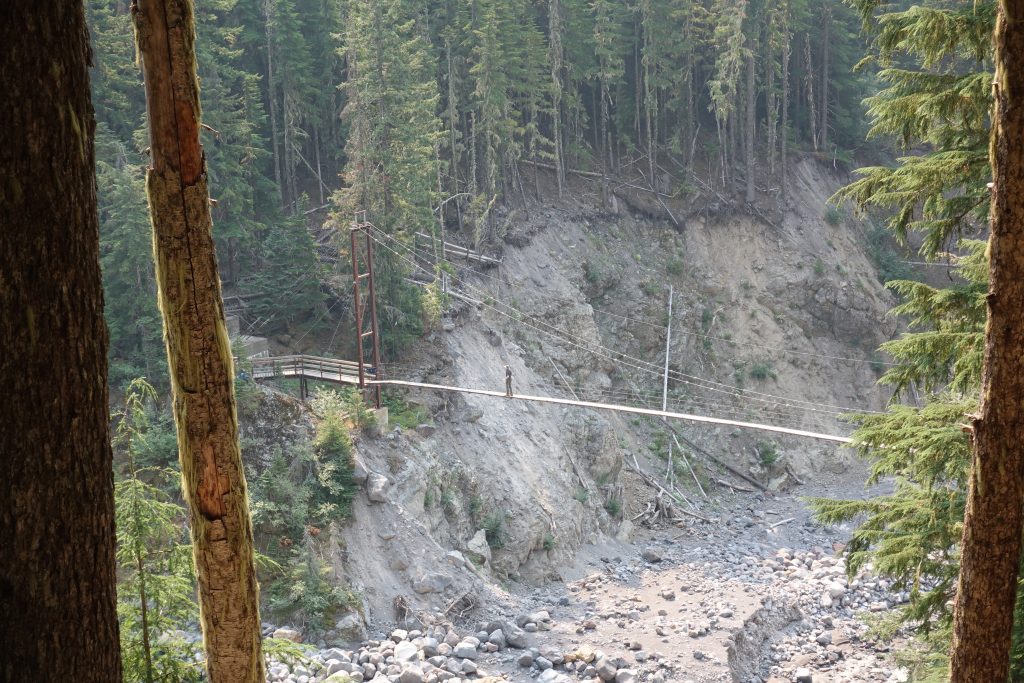 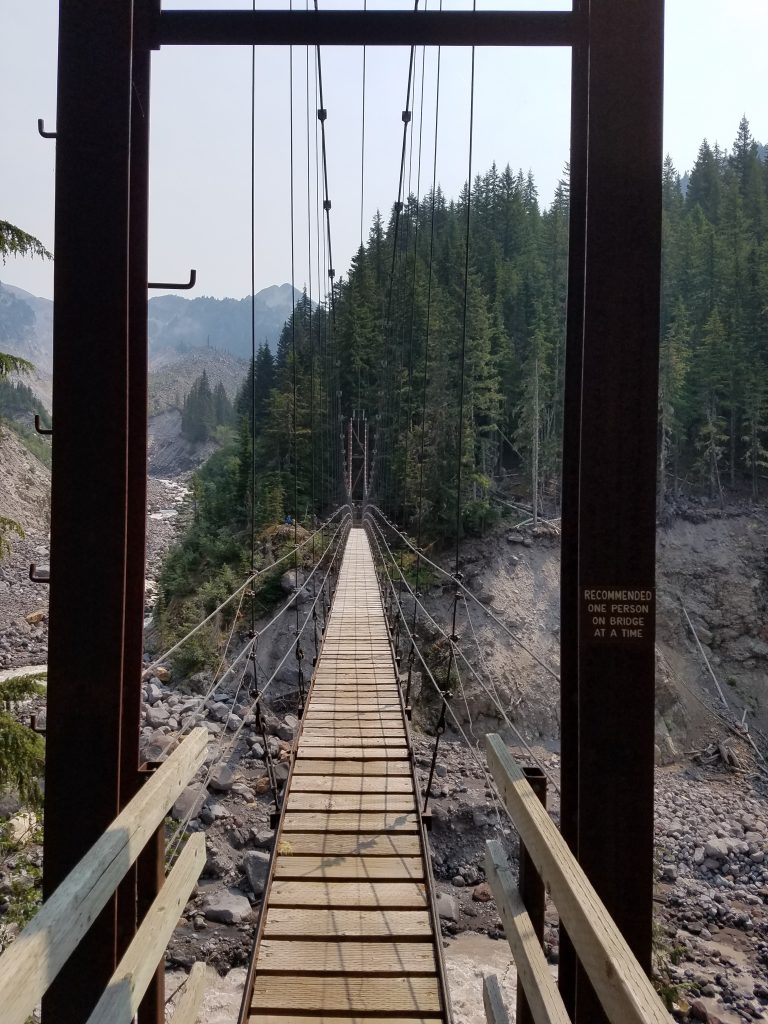 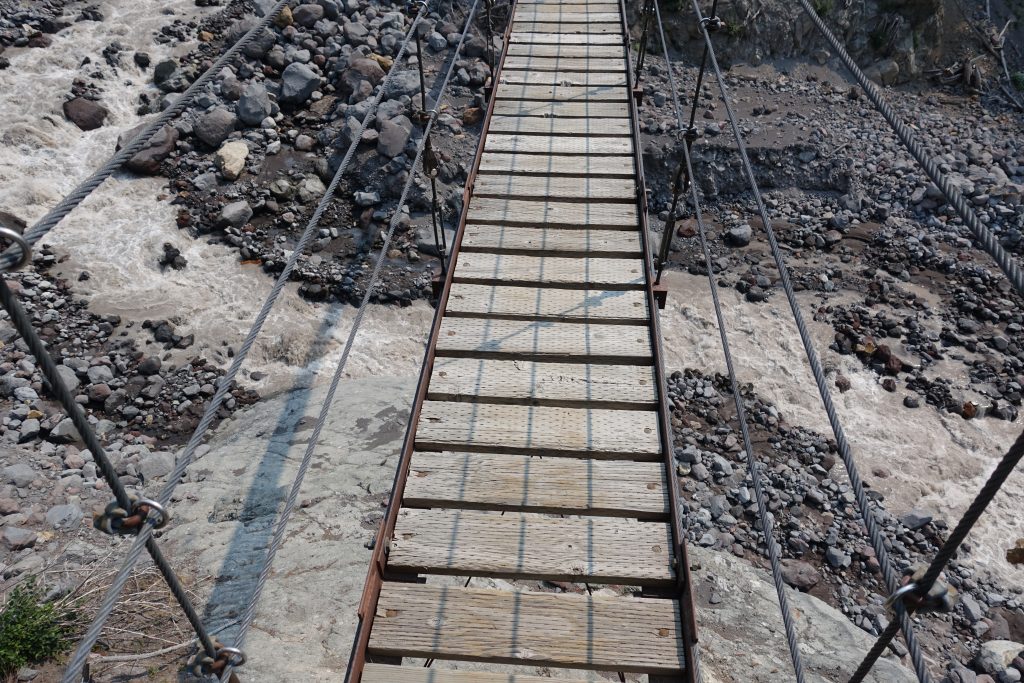 The picture doesn’t really do it justice, or maybe it does.   It felt really high up, maybe 50 feet.   Most of the boards were solid.

After talking to the kids resting in the shade on the other side about trail conditions, and the much-discussed ford of the S. Mowich, I pressed on, back up and up to a park area.   I did the extra 0.7 miles of mostly flat, easy trail to Mirror Lakes.    It was barely afternoon, and I had only a few miles downhill to go – why not?   I chose well, the little area off the main trail was well worth the exploration. 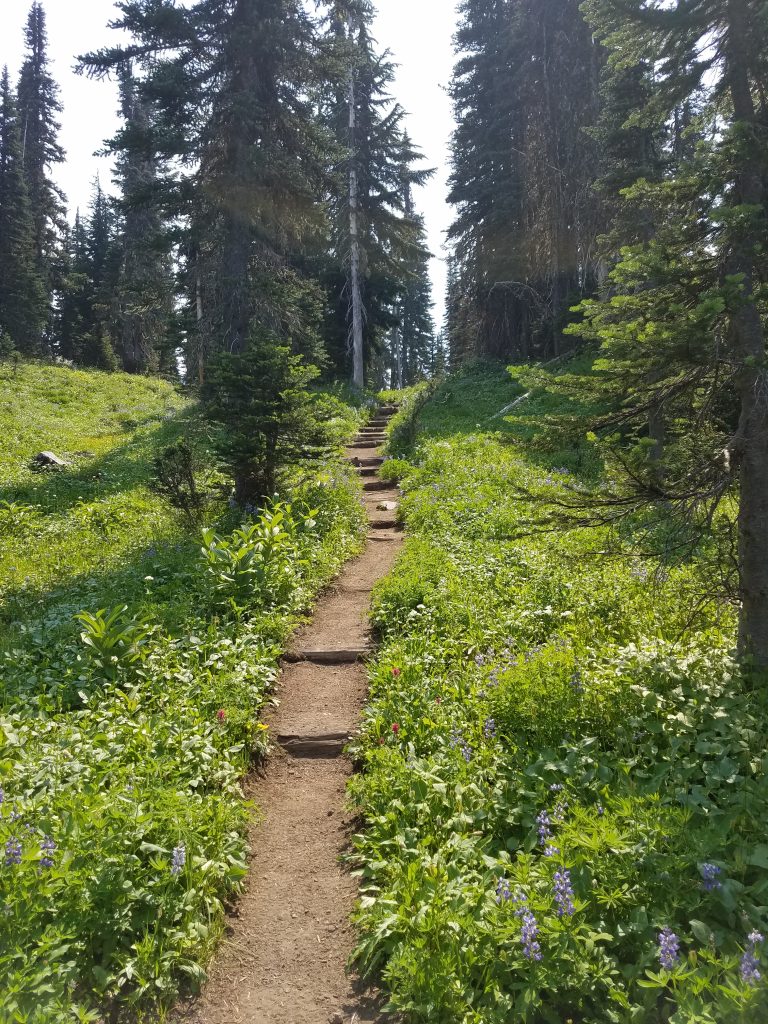 Not exactly “lakes” but the whole area was full of these little ponds, many of which had a nice view of Rainier. 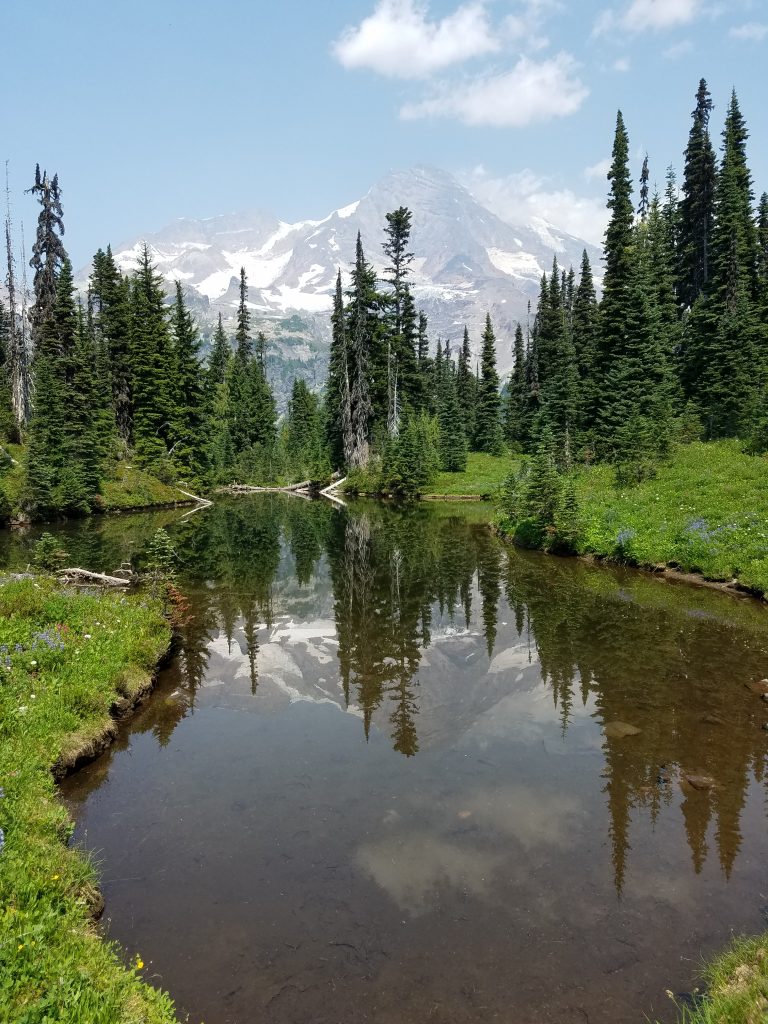 Again, the meadows were overflowing with purple lupines, and both red and magenta Indian Paintbrush. 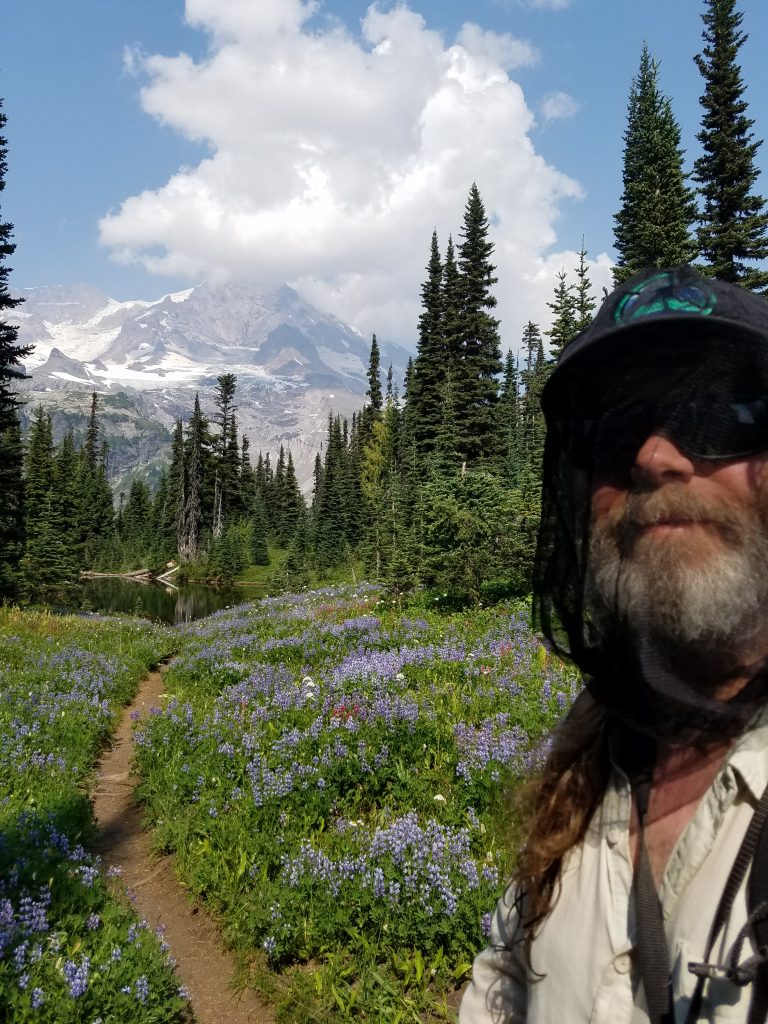 And bugs.   The bugs were bad here.   I had been warned that the area between here and a quarter mile past the Devil’s Dream Camp were bad.   They were bad, but not New England bad.    With long sleeves and a few swats you could keep yourself bug free, but the headnet just made it easy.   If you’ve been to a cookout in Southern New England in August, you can easily handle these mosquitoes.   Out west they also have these flies that look (and bite) like miniature deer flies – except they’re REALLY slow and stupid, so you can kill them in droves.

After a long break, snack, journalling, and a short nap, it was dinner time, so I figured I’d press on. 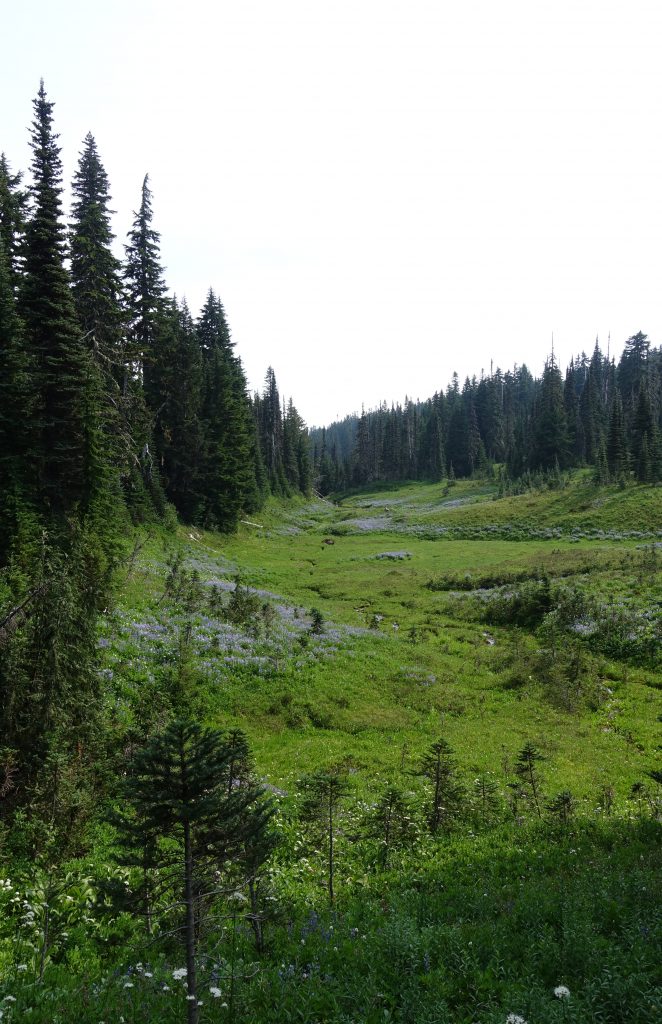 There’s about a mile and a half of flattish, wet meadows, hence the bugs.    But it was gorgeous, and the views were nice.   It’s a popular area, since its about a day from the Longmire entrance, and there are some accessible side trails, so this section of the Wonderland was very well done.    Right around the time it got steep, I got to Devil’s Dream Campsite.    There I saw a bunch of people, all sitting in their tents because of the aggressive mosquitoes.   But because it was 80-something degrees out, and a tent adds at least 10 degrees, they were all sitting there in their underwear.   Proof to me that my itinerary skipping this site was a good one.   The ranger was right.

Coming down the steep section past the camp, I found the actual “Devil’s Dream”, a super deep, narrow gorge with water rushing in the bottom.   There I ran into two hikers on their way up from Longmire, a worthy day trip.   After a few moments of chatting, they asked if I had any bug spray – they didn’t bring any, and had hoped to buy it in Longmire, but “they were all out”.   “I bet they were!”, I thought.

Since I hadn’t used mine at all, I told them to go nuts, but that I needed it back.   So after they soaked their clothes (gross) and covered themselves in it, we went our separate ways. 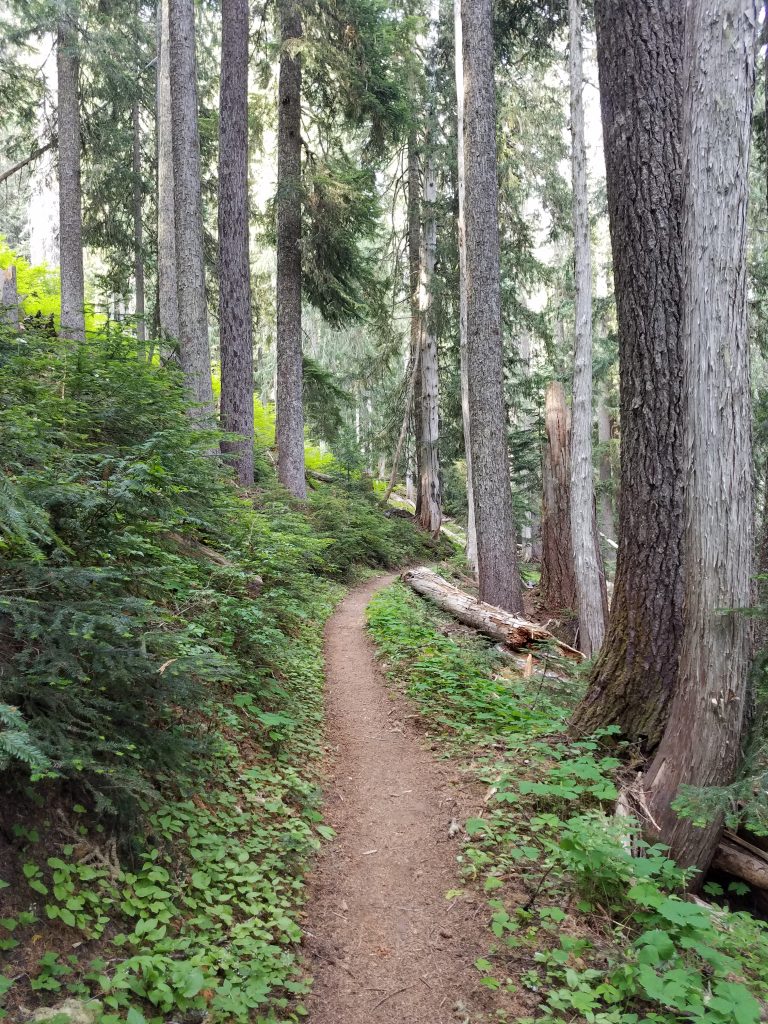 I got to Pyramid Creek around 6pm, spent a few minutes finding the most recent bridge, and crossed without incident. 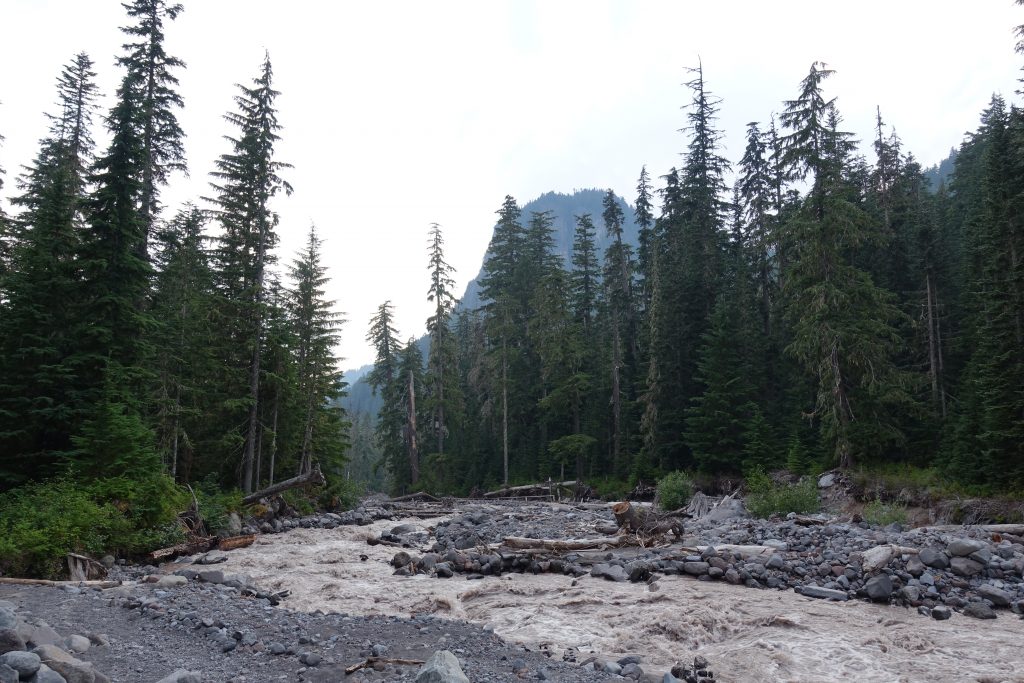 I arrived at the camp of 3 spots, and took the best one.    As the night wore on it became apparent that I’d have the whole camp to myself.   An inconceivable situation, but a luxury.    Clouds started rolling in, complementing the haze, so I put up the tarp. 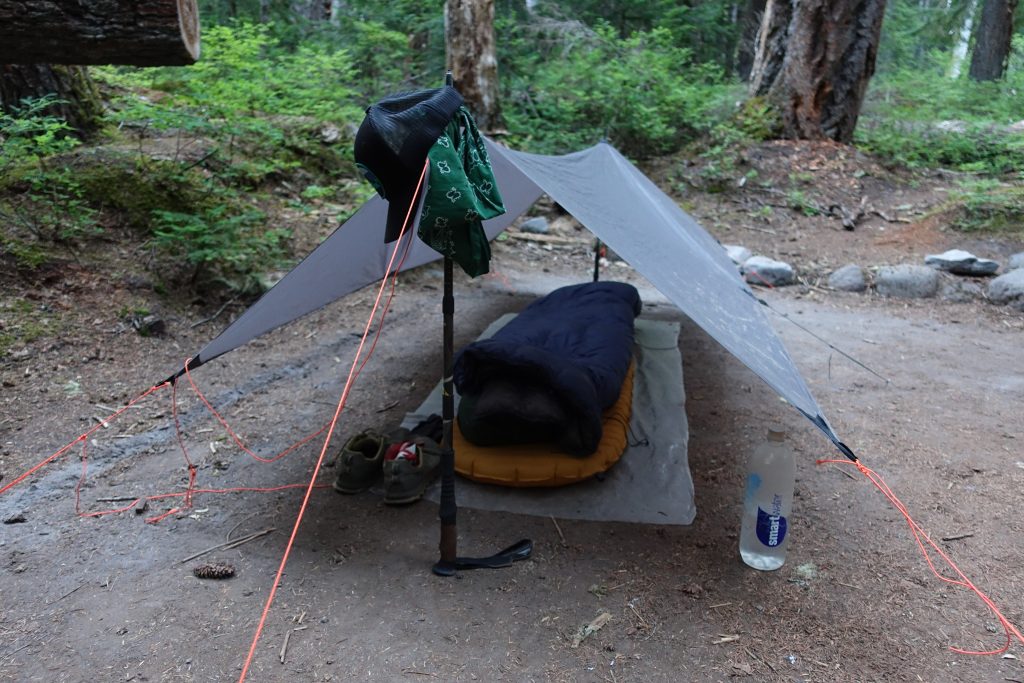 Last night before resupply, what’s for dinner?     Flavored mashed potatoes and the last of my tomato paste.   Not something that will win any awards, but it packs well.   I still had my emergency Ramen of course. 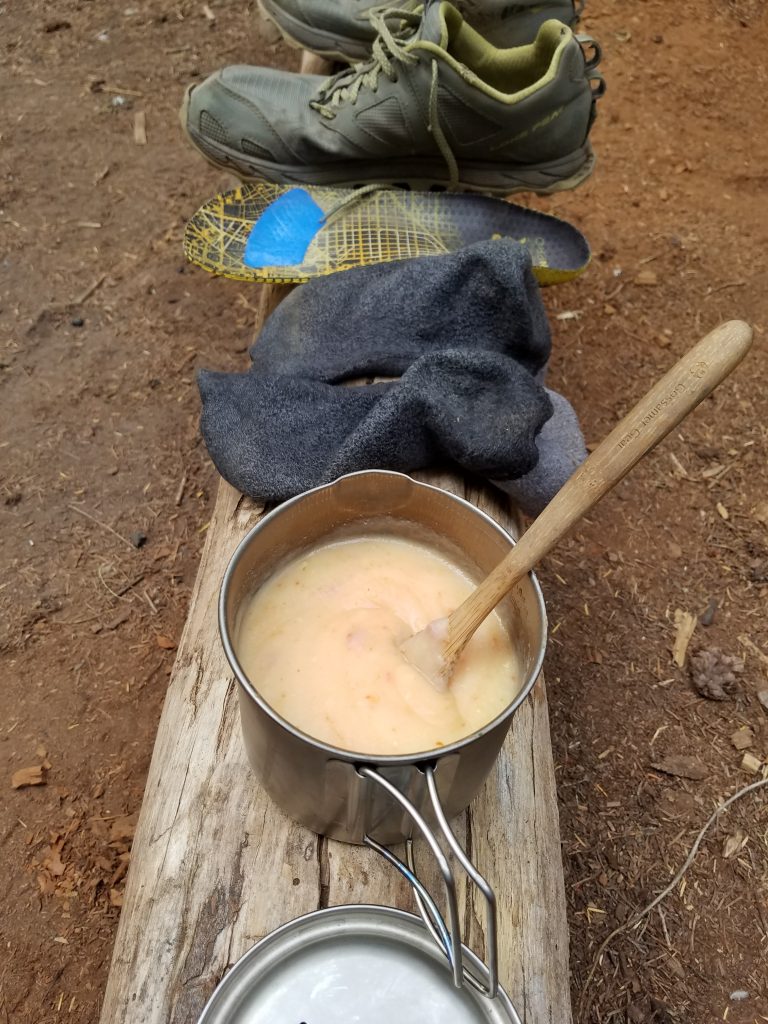 The Altras, the insoles, the Injinji’s, and dinner.    Hiker trash achievement unlocked.   I got a great night’s sleep, as usual the bugs quieted right down when it got dark.   The next day would be great, an opportunity for real food, maybe some snacks, a proper bathroom, and my food resupply!