Day 11 of my Wonderland Trial hike, from Glacier Basin down to Sunrise via Burroughs Mountain.   Last day, time to go home. 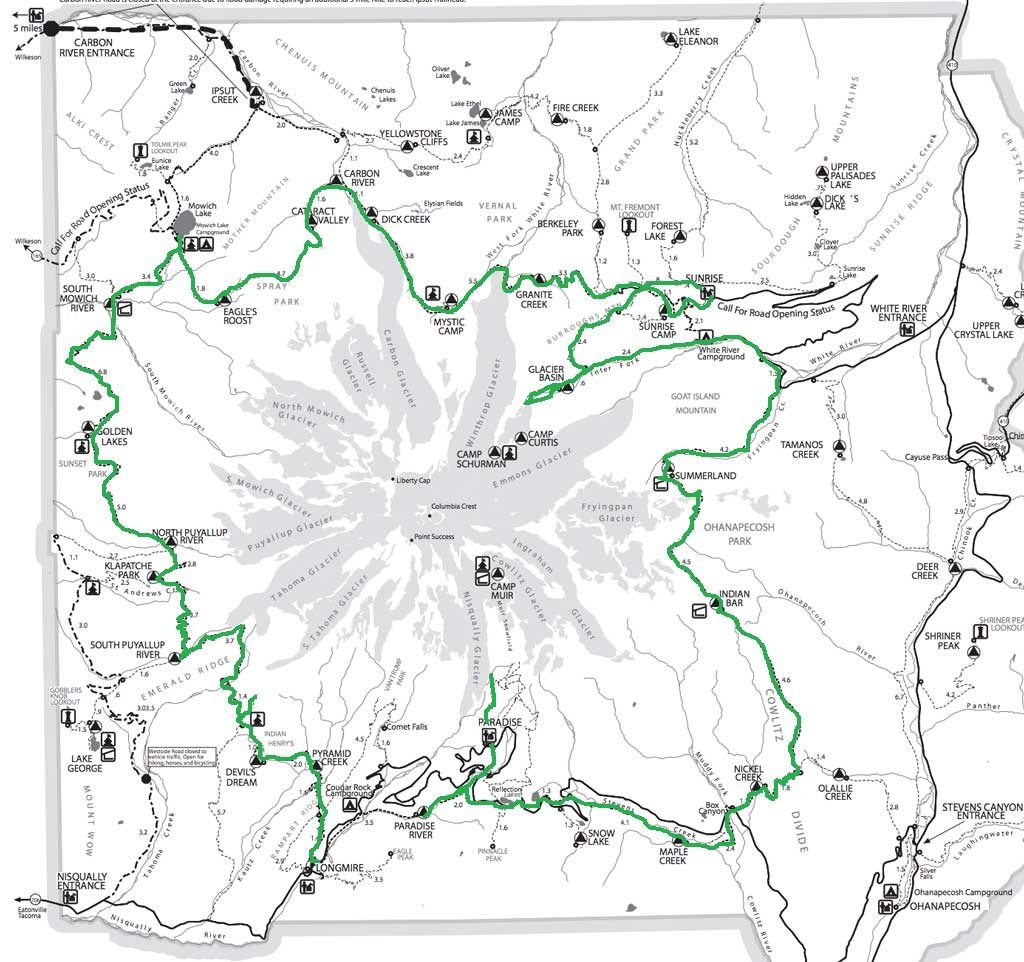 Another no-hurry day, although I was on a schedule.   A friend from the PCT was meeting me at Sunrise around 10am, and I had about 5.5 miles to go, including up and over Burroughs Mountain, which is really a 3 peak ridge.   And it was steep.   The map even pointed out that in early season, an ice axe would be needed.   Fortunately(?) the heat had cleaned up the trail nicely, but it was a grind.   There are a lot of easy switchbacks, and the trail wasn’t technical at all, but it was New England steep.   But unlike steep New England trails, where you’re staring at your feet and tripping over rocks, you have a smooth sandy footbed, and views like this all the way up. 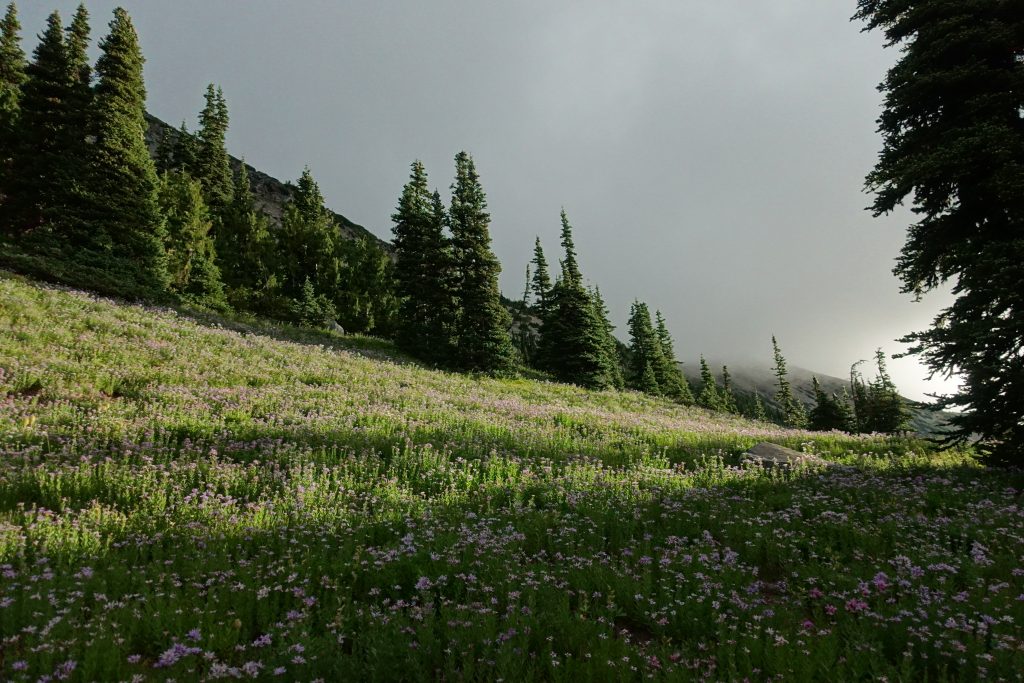 Came from down there, that stream is the stream (lower left) that the Glacier Basin campsite is on.   I had hoped to see wildlife on my last day, maybe some mountain goats, or an elk.   Instead all I saw were some tiny birds and a few marmots on the tundra up high. 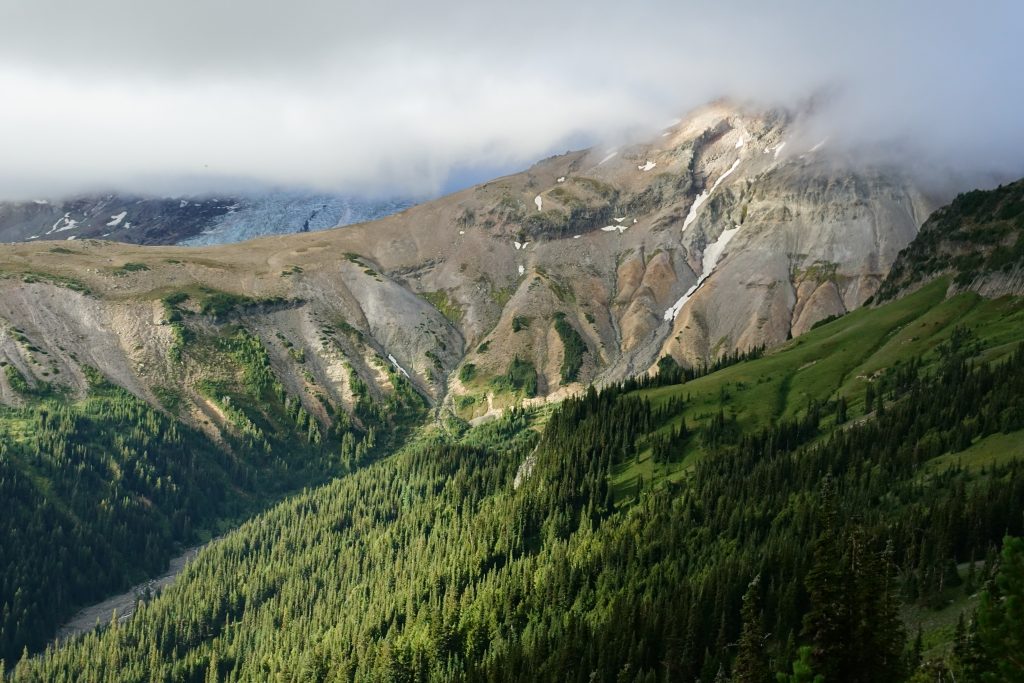 Getting up out of the trees was nice, at first.  I had worked up quite a heat on the climb and the breeze was just what I needed.   It quickly wasn’t.   Now I faced the dilemma – hike fast and end up at the parking lot early, or hike slow and be cold.  Because I had a hat and rain jacket, and because hypothermia sucks, I took my time and savored it.   My last day, my 7000 foot climb, and having the whole mountain to myself.   As I hiked along I started meeting people coming up from Sunrise hiking the other way, but nobody came my way.    I was able to bask in the utter silence.

Remined me a lot of the Whites, or that time in Death Valley when I was up at around the same elevation, and got snowed off Telescope Peak. 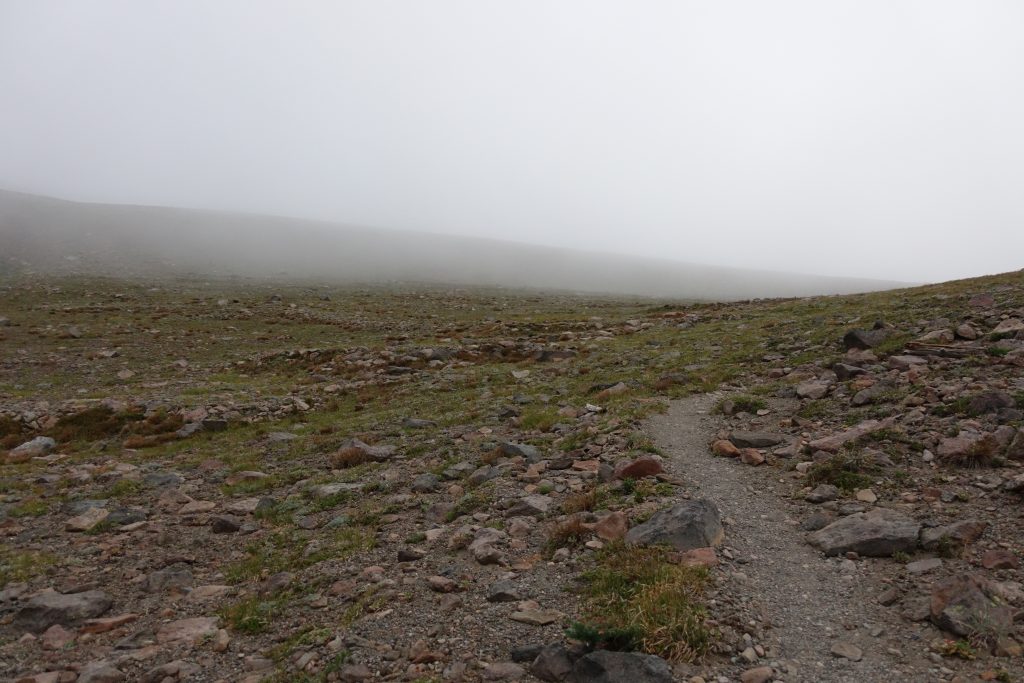 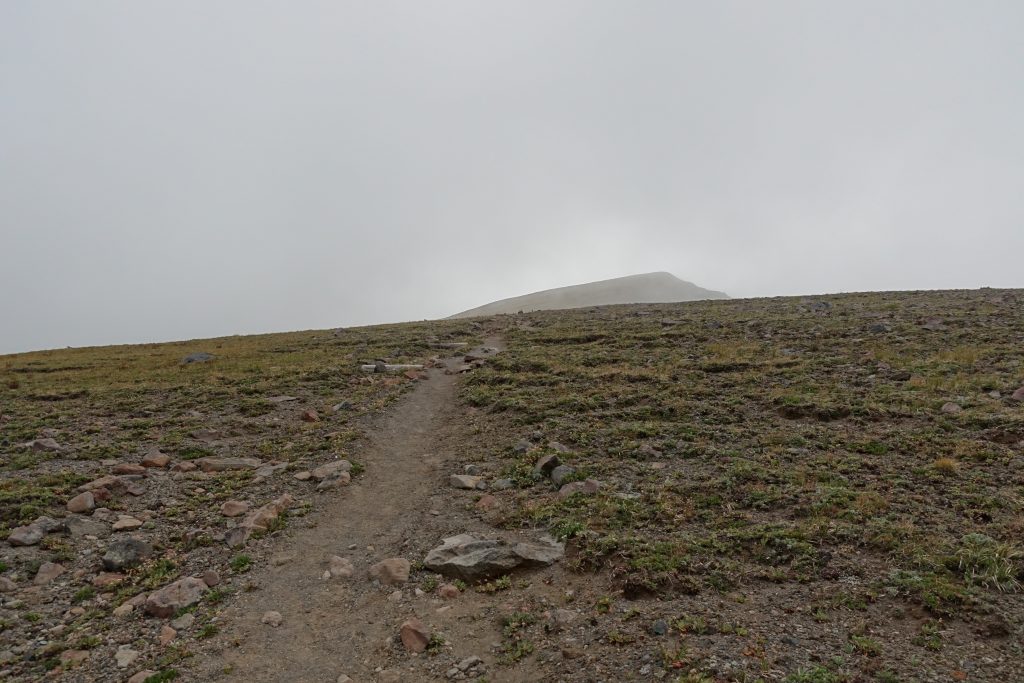 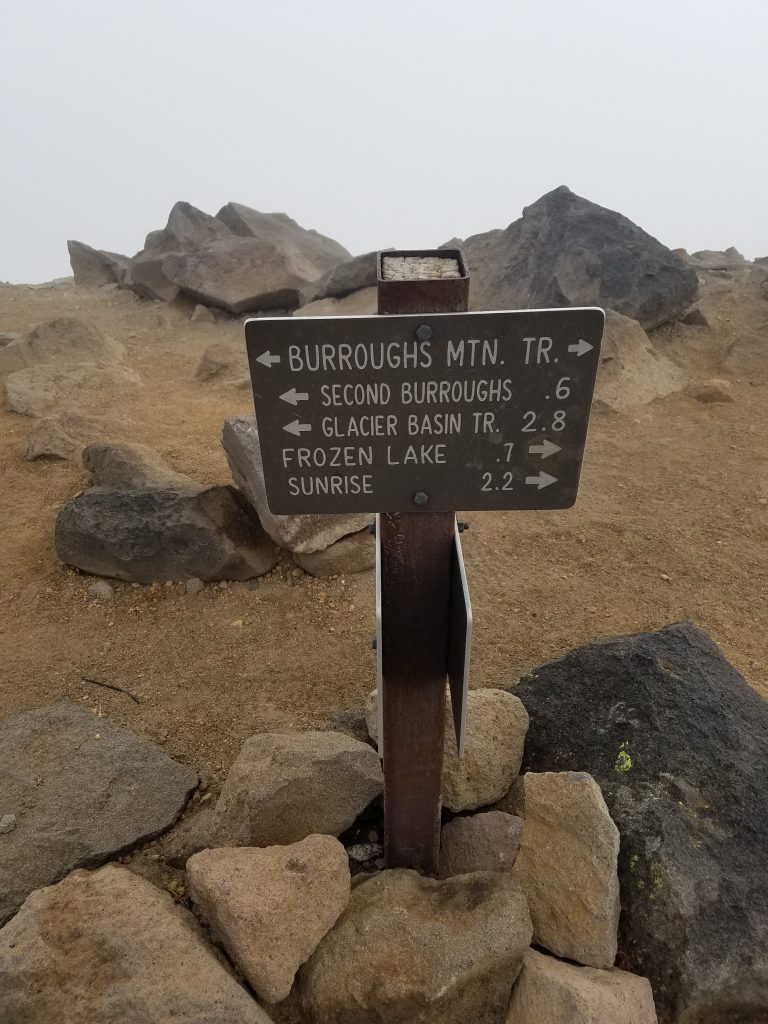 I didn’t bring my compass, but by dead reckoning (and common sense!) I think this chair faces the summit of Rainier.   Behind this dome-shaped chair there was a pile of human waste.   Awesome. 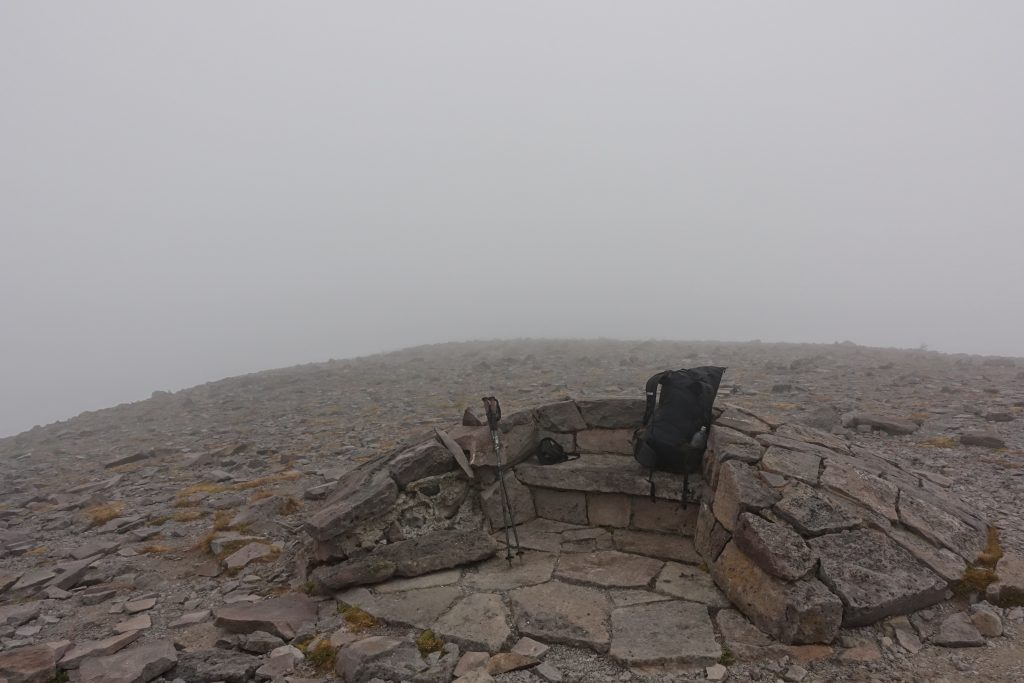 I imagine there was a really cool view off to the left (North) here.   The only cool view I got was watching the fog blow sideways and up the mountain. 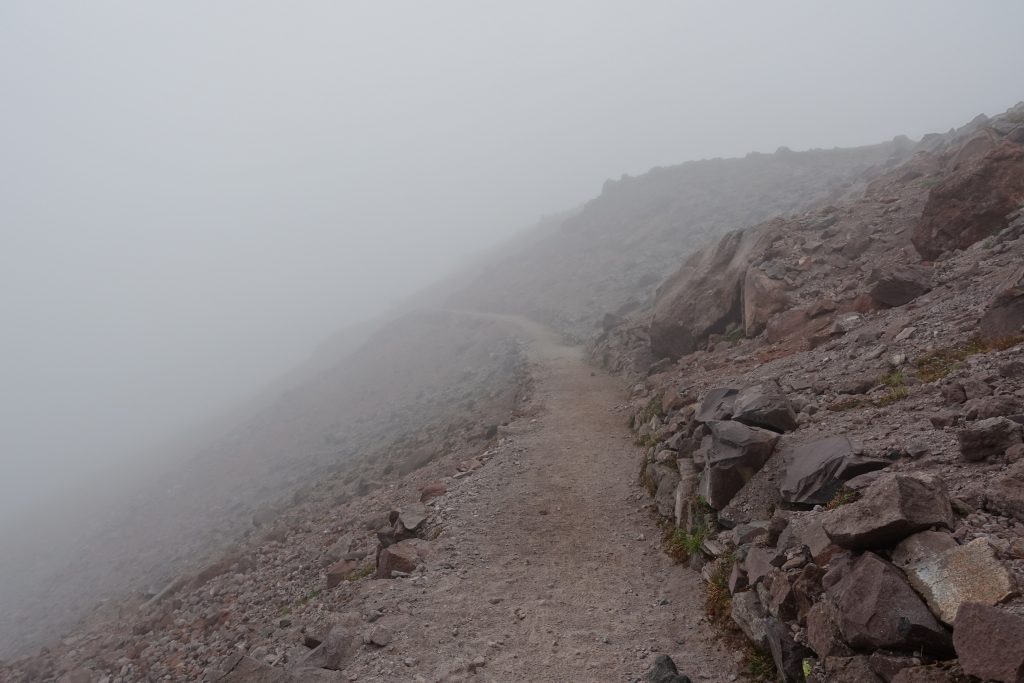 Down towards the bottom, where the real tourist section begins, the NPS made a valiant effort to educate people.  The terrain up there is super fragile.   I’m not sure why the painted sections lasted longer, perhaps they absorbed less water over the years? 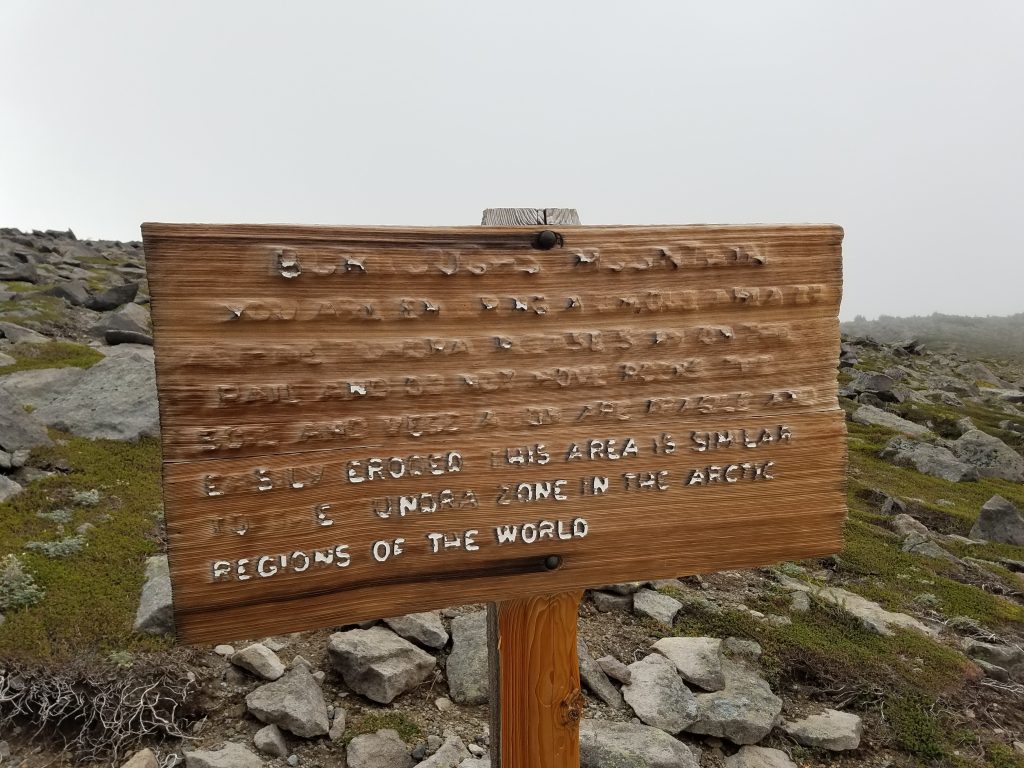 Frozen Lake, the water source for Sunrise.   At this point the trail was mobbed with people.   It was just after 9, and an easy 1-2 mostly flat miles to the parking area. 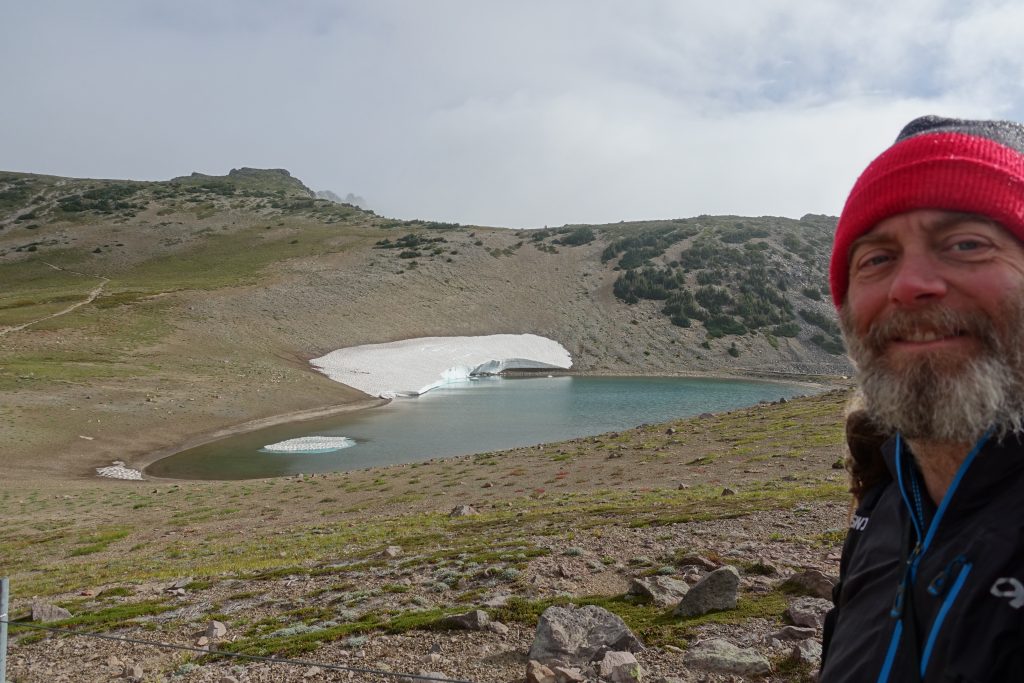 From there its a two-wide, flat path with a slight downhill to the parking area. 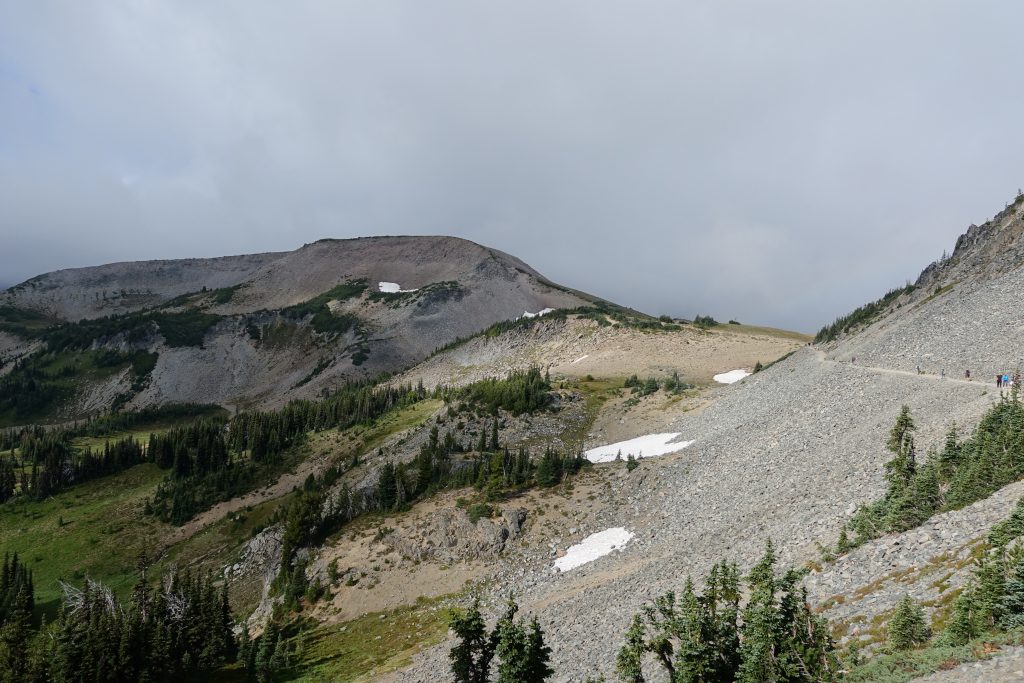 And that’s it.   Back to Sunrise, full circle.   Kind of sad.   I talked to a couple of trail volunteers who were, I guess, patrolling for trash or twisted ankles.   They certainly weren’t doing traffic control.   I think I rebuked more people at Paradise in an hour than they did all day.  They gave me a verbal pat on the back for doing the Wonderland.

At this point I was walking slowly, intentionally pumping the brakes.   Who wants to be done? 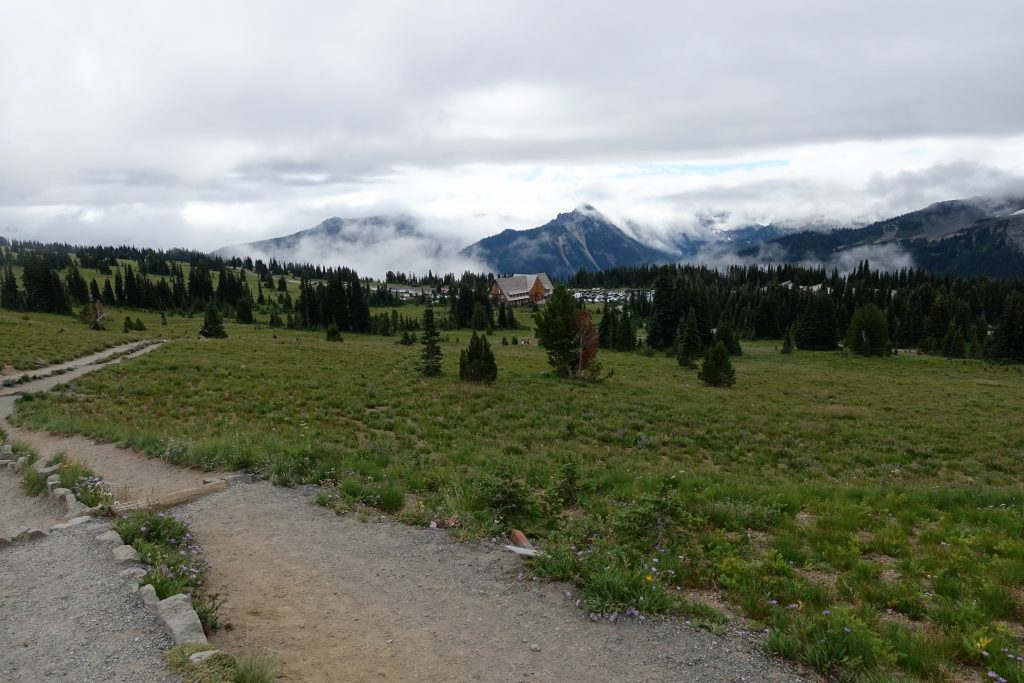 I shuffled/stumbled down onto the pavement in the parking lot at Sunrise.   It seemed as busy as Times Square to me, but there couldn’t have been more than a few hundred cars.  Still, slighly overwhelming.   And also underwhelming – it sucked.   Too many people, cars, and pavement.

Within about 60 seconds, I heard, “Smokebeard!!”

My friend from the PCT, Cherry Bomb, had agreed to come meet me, do a little hiking, and then give me a ride to Seattle.   It was great to catch up after a few years.   We hung out in the parking area for a bit, trying to figure out what to do.   One plan was to hike up the PCT to Sheep Lake, but that was about a 3 mile walk uphill.   And it started to rain.    We drove down to the White River Campground where the sites are first-come, first-served.   After sitting in the car and eating lunch, we decided to drive up to Chinook Pass.   Parts of the road had terrible visibility, and the rain started coming down.

But there was a short enough break for a selfie! 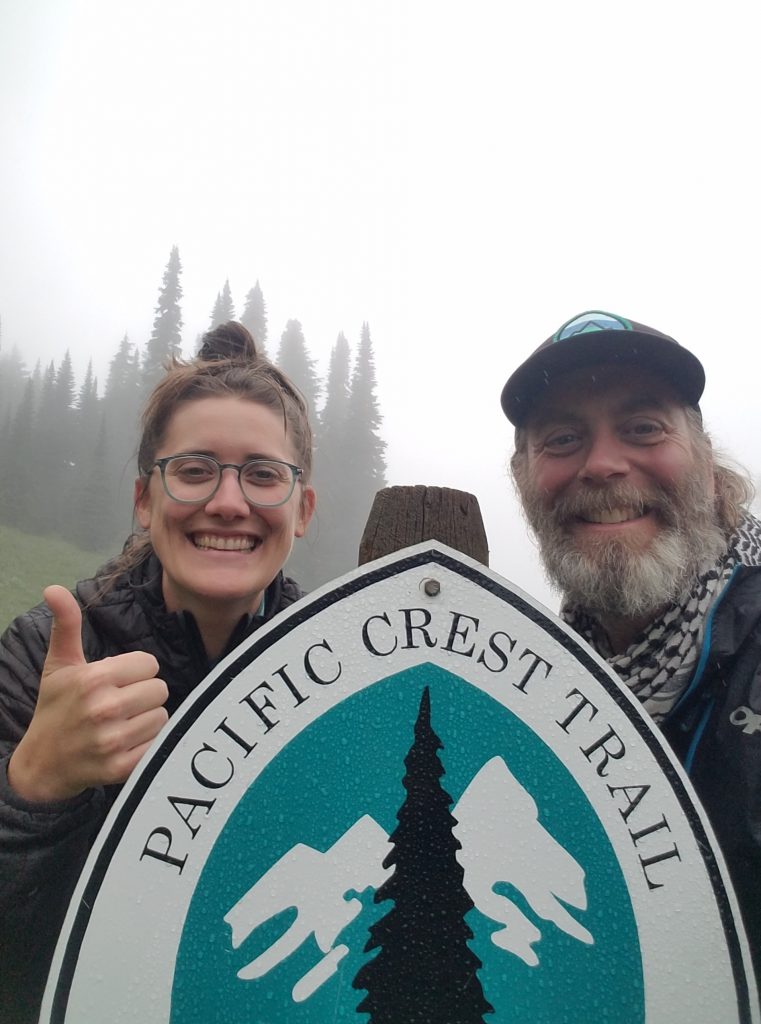 The rain fizzled out around dinner time, so we quickly ate and drank our ceremonial beers.   Just about dusk the rain started again, so we crawled into our shelters – she in her Fly Creek and I in my tarp.   We chatted a bit through the nylon and then tried to sleep.   Except, it was a public campground reachable by car, so there were the obligatory drunks partying loudly until about 11pm.   Or later, but I finally fell asleep.

Up at around 6am, we rolled out like thruhikers and within minutes were packed.   She was lucky since she just had to throw all her stuff in the trunk of her car.   While the rest of the campground slept, we did a bit of a walk and watched the sun come up on the mountain. 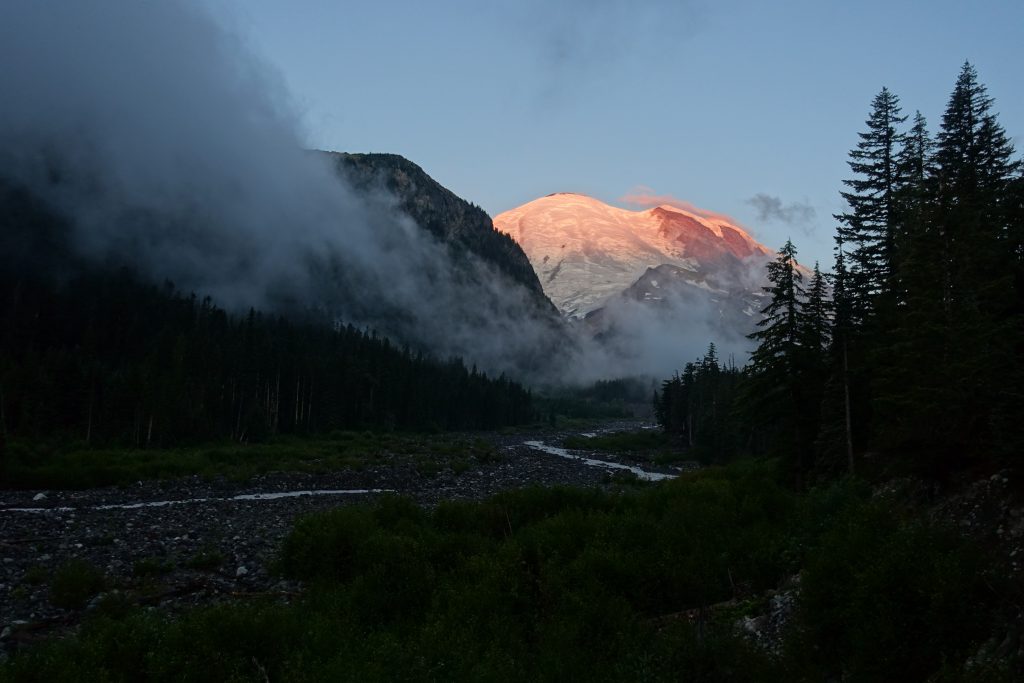 A few hours later via the Starbucks in Enumclaw, we were in downtown Seattle.   More culture shock.   But when in Rome, right?   So we went to the Mighty O’ Donuts.  All vegan and all awesome. 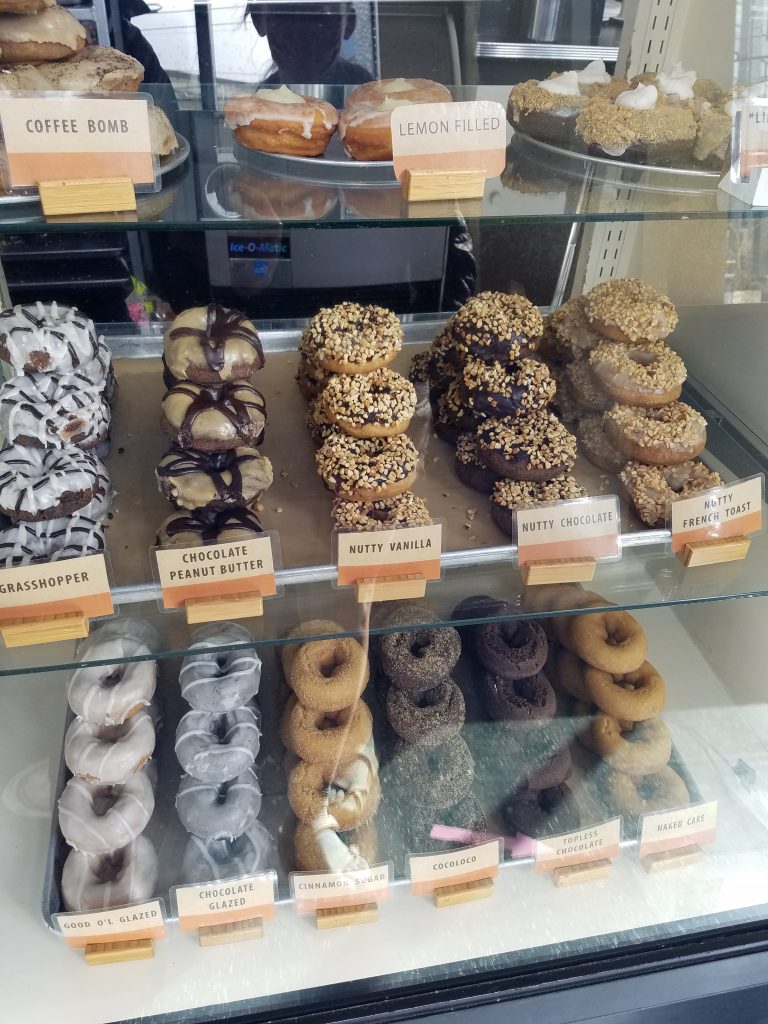 An hour later I was at my hotel.

The next 2 days were trying – an early morning flight, a tornado warning in Chicago, a night spent sleeping on pizza boxes at O’Hare, and a double standby switcheroo through Baltimore.   But in the end, I made it home in one piece.