Day 7 of my Wonderland Trail hike.   Paradise Creek via Longmire and a hitchhike detour to Nisqually Glacier. 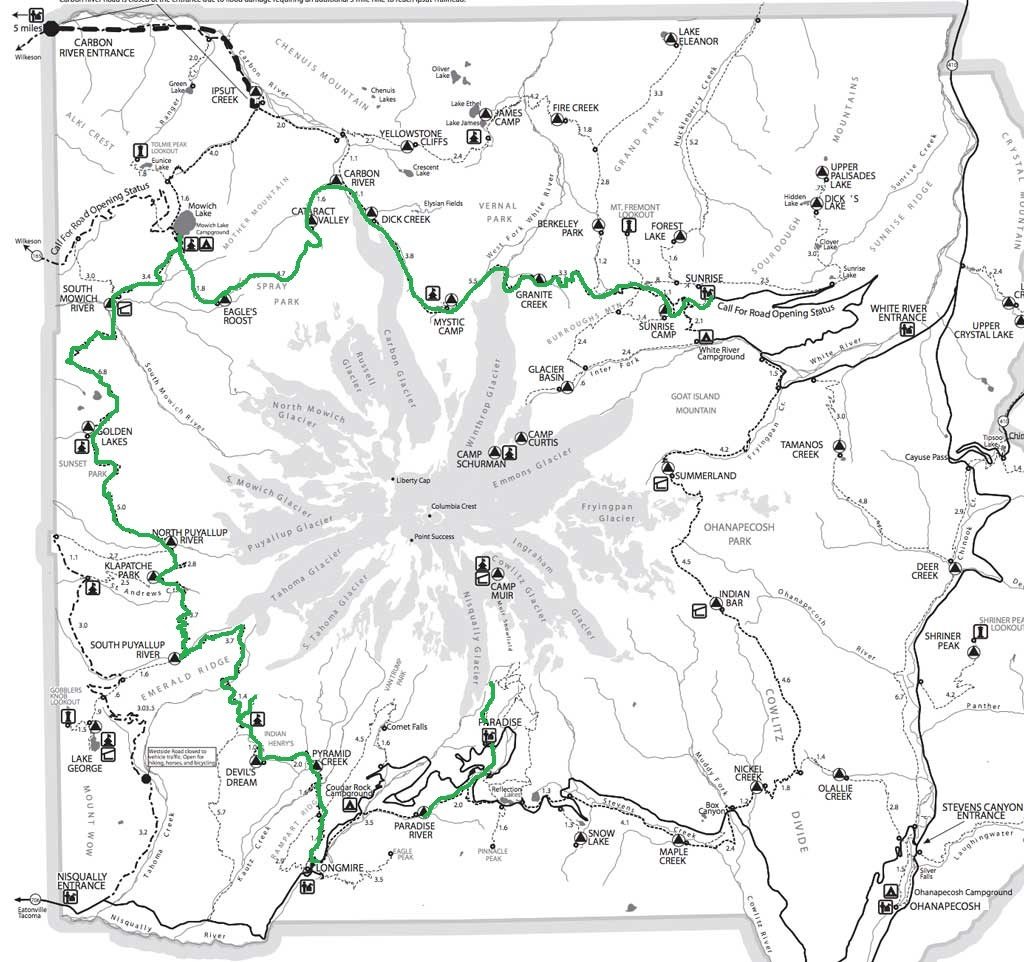 Today was a weird day, I started alone in the woods, got to eat real food, hitched up the mountain to a resort, got a bit lost, and ended the day hiking backwards down the trail.

I got up around 7, and dawdled a bit in camp because I only had 3 miles of easy stuff to Longmire, where I was going to get my fooddrop and a meal.   After that were 5 easy miles along a road which I was not looking forward to.   This was going to be the 2nd 8 miler, and the middle day of the 3 easier days on trail. 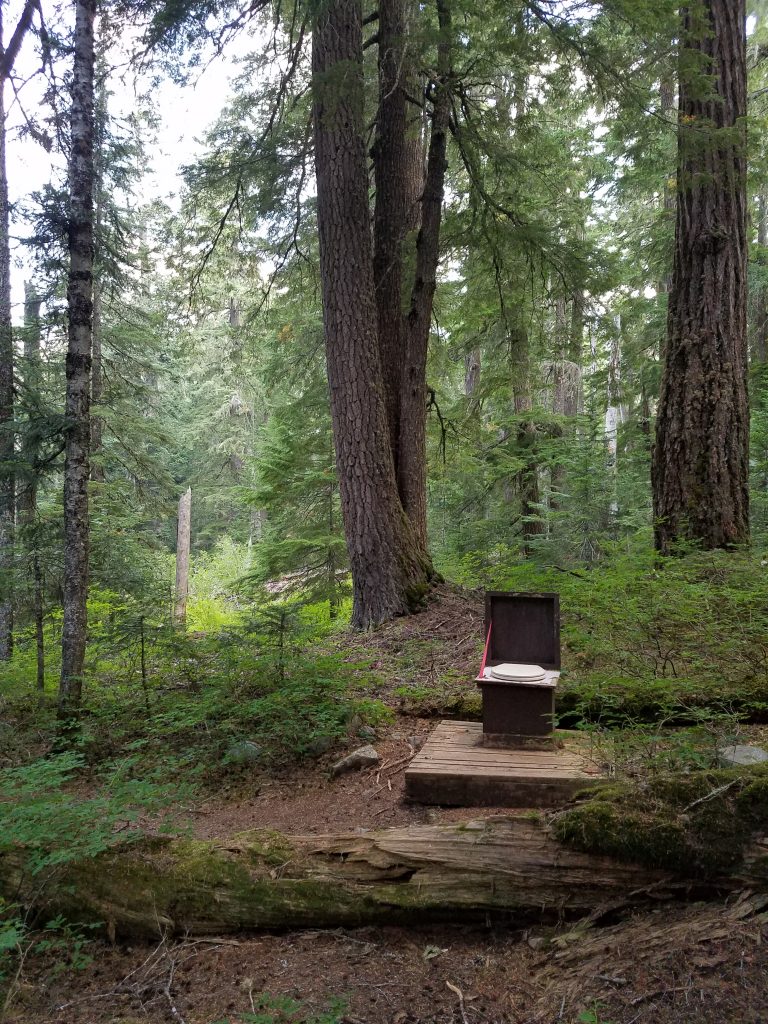 There was a cool river crossing, and some easy up and down through old growth.   Really old stuff, like 5 foot diameter pines.   I could tell I was nearing more trafficked areas – trails were wider, more beaten down, and there was a sharp increase in the number of trail runners. 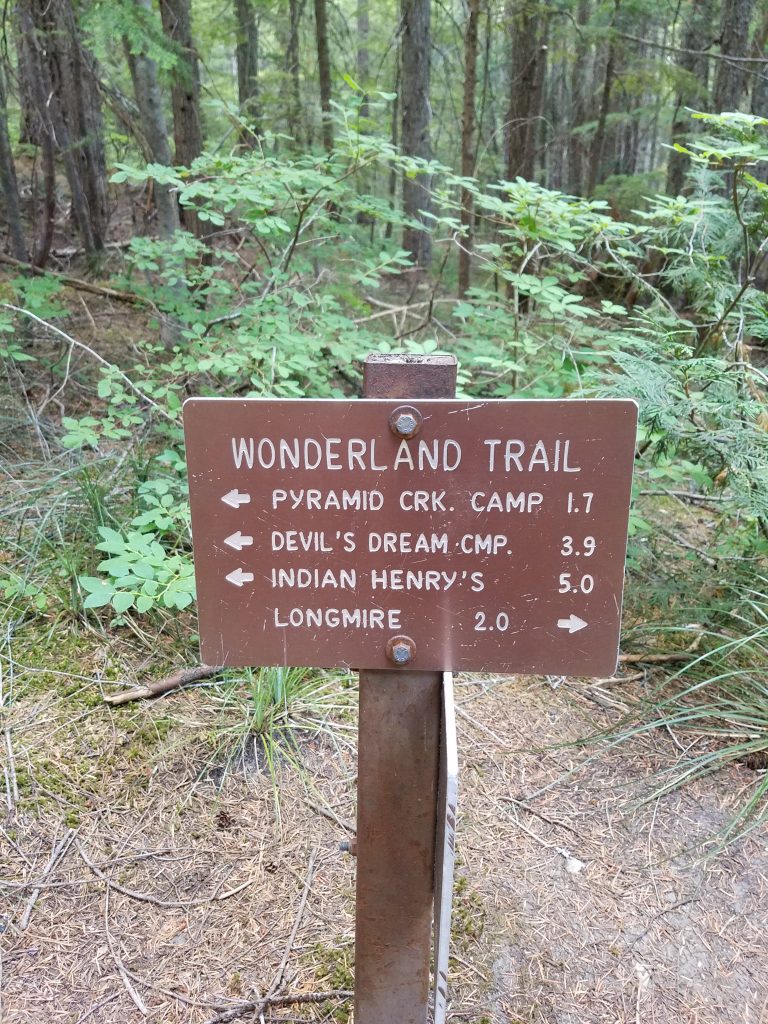 The view from Kautz Creek told me everything I needed to know – no rain today, but haze and high temperatures.   As much as I missed having my umbrella shoved in the side of my pack, I didn’t miss carrying the weight. 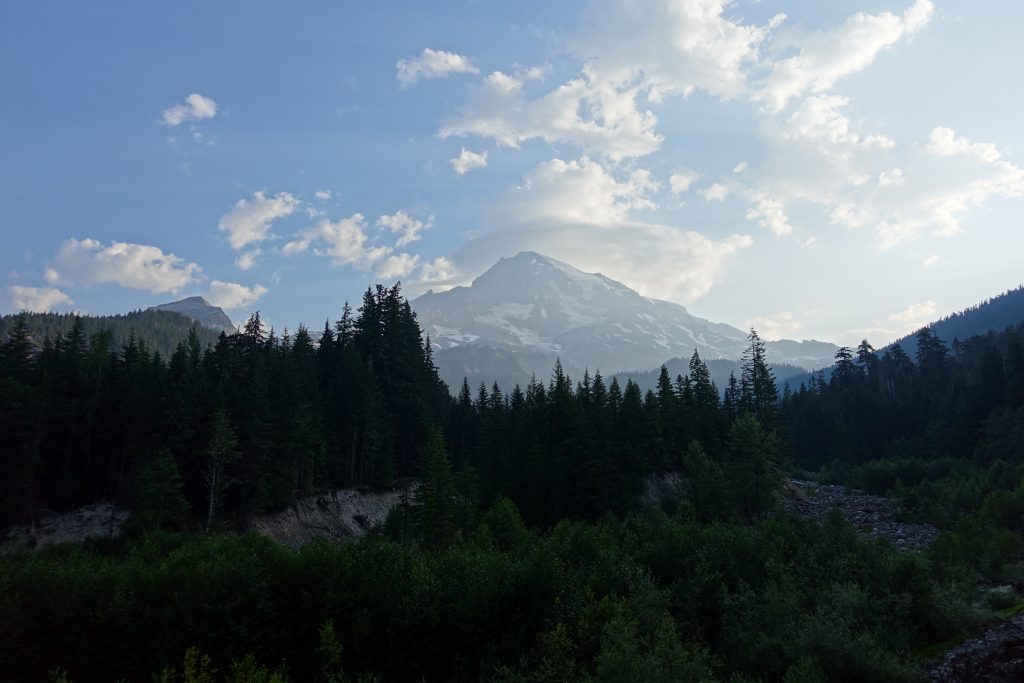 By 9:30 or so I was at Longmire, it was weird to be crossing paved roads and looking for cars.   I headed straight for the National Park Inn in Longmire Village, both for some food and the skinny on cell reception.   One yogurt parfait later I learned that there was neither Internet NOR cell reception here.  I had assumed that because there was a ranger station we were at the entrance, and like White River, there would be Internet.  Nope – perhaps at the Nisqually entrance, but that didn’t help me.   I took a brief walk on a nature trail that wandered through some natural mineral springs, the site of an old resort.   Then it was time to see if my food made it, and what shape it was in.

In Longmire village there were a lot of little informational signs about the old resort, and some naturalist stuff about the mineral springs.   This was the most interesting – tree born in the year 1293. 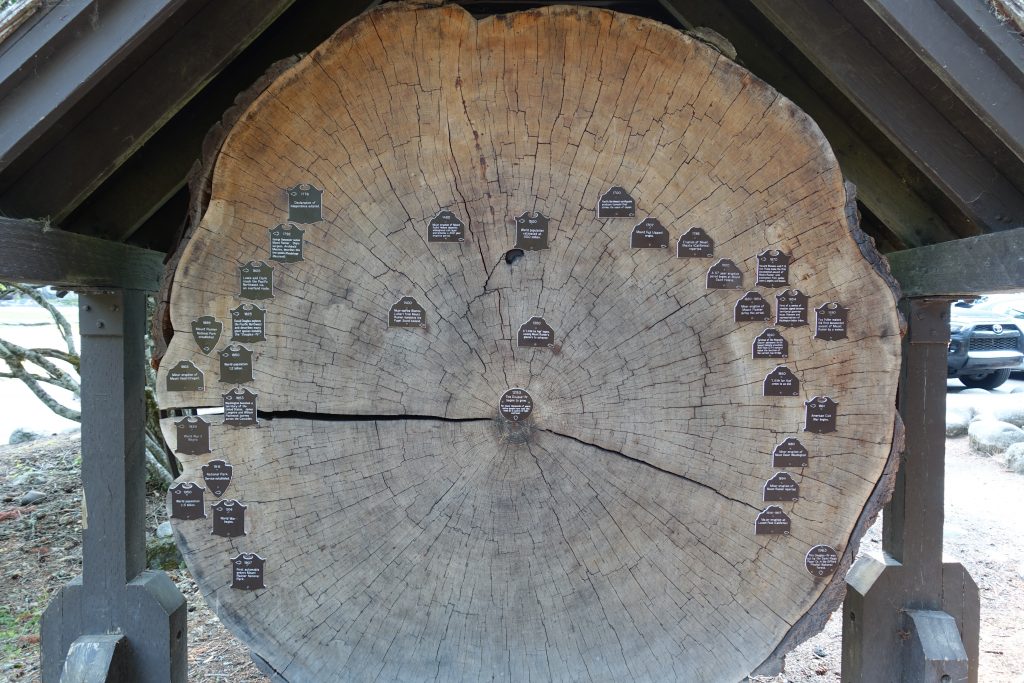 I had two worries about my maildrop.   The first was the address – UPS claimed this wasn’t a real place; the person forced the address into the system, but was noncomittal on whether or not my package would arrive.   Second, I had mailed myself cheese.  3 weeks ago.  It wasn’t fancy hard cheese, designed to be stored at room temp, it was cheap grocery store block cheese.   But, I figured it was pasturized and sealed in its plastic packaging, so how bad could it be?

The food, and cheese, arrived safely.  I had a bit of a hiker trash yardsale on the lawn in front of the ranger station as I repacked.   My problems of the day were: way too much food for only 3 1/2 days, basically nothing to do for the next 8 hours, and no ability to call home and tell people I was alive.   I heard tell that the Paradise Inn / Visitor Center up the mountain had Internet.   I also wanted to charge my phone and power brick.

I cleaned up like a hobo in the bathroom, put on my sleeping shirt (still clean), and put out my thumb.   Of course in a National Park, during COVID, nobody stopped.   But about 15 min later a delivery guy who worked for the concession company offered me a lift up to Paradise.

By 11 I was eating an overpriced sandwich and a pricey-but-worth-it cinnamon roll up in the Paradise resort building.   As I walked into the cafe, the power went out.   So much for Internet and charging my phone. 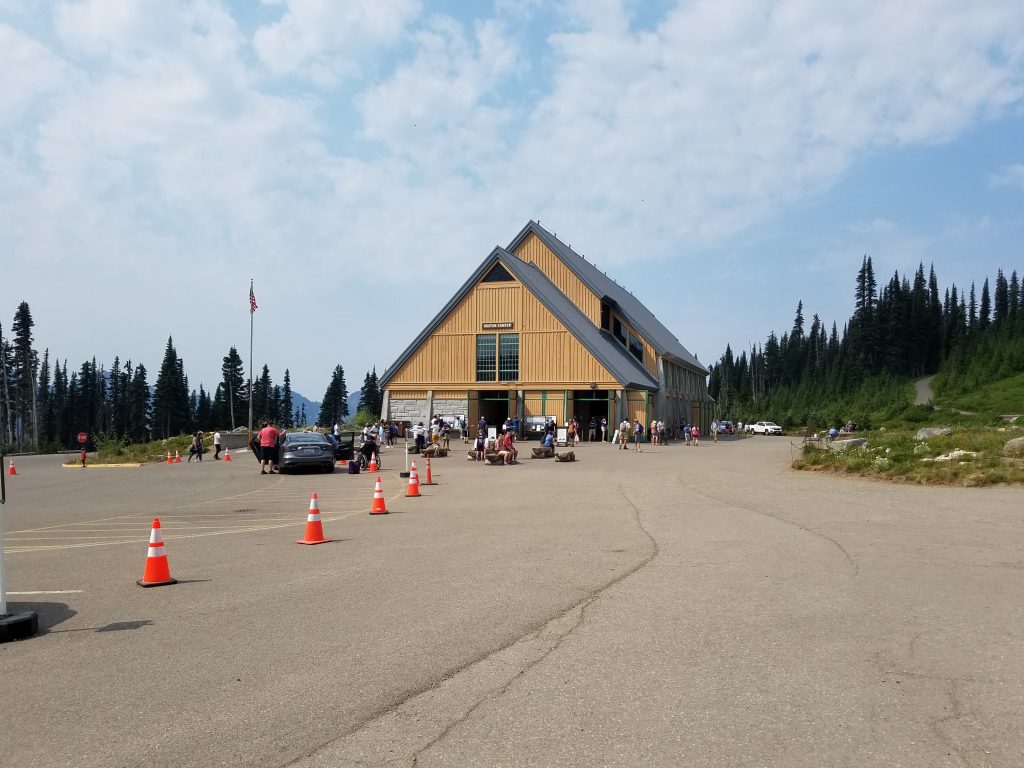 I spent a few hours journalling and resting, and the power came on!  I found a plug and juiced up the phone a bit, then I left the brick and charger with the reception desk.   They nicely agreed to charge it for me.  “I’ll be back in an hour”, I said.   Little did I know.

The hikes in the immediate area are easy, some even paved.   But they’re overrun with people, and they’re steep, like 1000 feet/mile steep.    Since at this point I didn’t have ALL day, I did an out and back, about a mile uphill towards the glacier.

This used to reach the road.   They built the bridge over the river at the foot of the glacier, now it’s retreated up the side of the mountain.   In this pic you can see its extending all the way to the lower left – that middle portion is just dirt-encrusted.   Instead of sunny and 90 degrees with no wind at the resort, it was 70, with a stiff downhill breeze off the ice.   Glorious.   I ran into a girl who had tried the Wonderland last year in early July, when everything was snow covered.   By everything I mean the shelters at the sites on the east side of the mountain were under snow.   She said most of the trip was done via GPS.   When her friends bailed partway through she ended up getting off.

Nothing for scale, but this waterfall was over 100 feet high, and pouring down onto and into the glacier, disappearing into a giant hole.   The roar of the waterfall was like thunder. 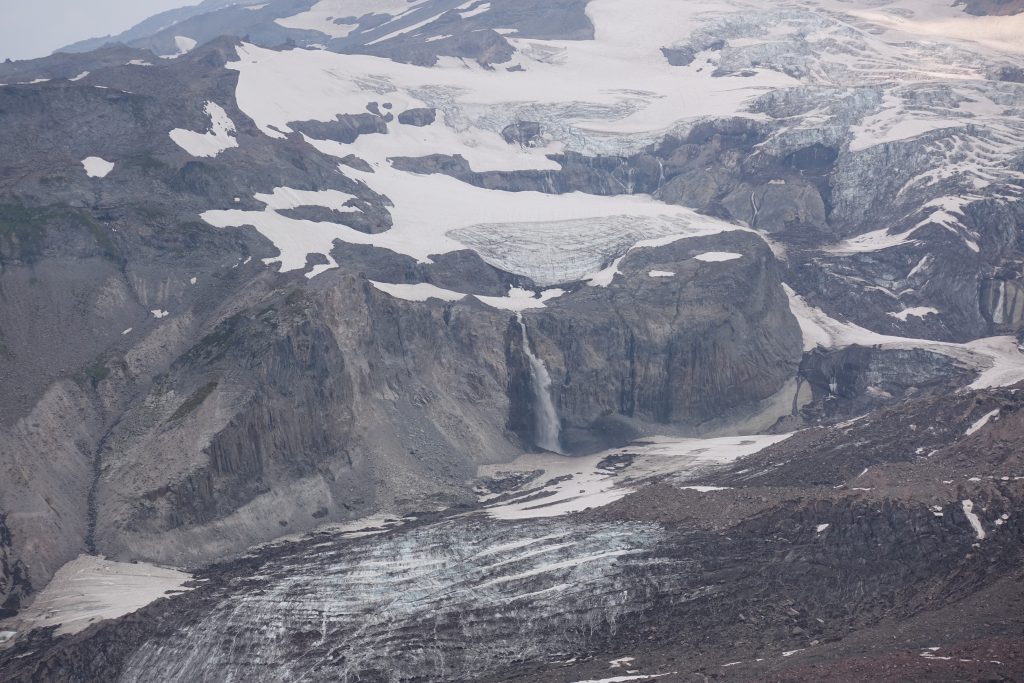 Apparently its “just” a walk up to Muir camp at 10,000 feet, but I had no time.   Periodically there were groups of 8-10 people coming down, with axes and helmets and ropes.   For $1800 you can do a few days’ training and a guided ascent of the Mountain.   Maybe next time. 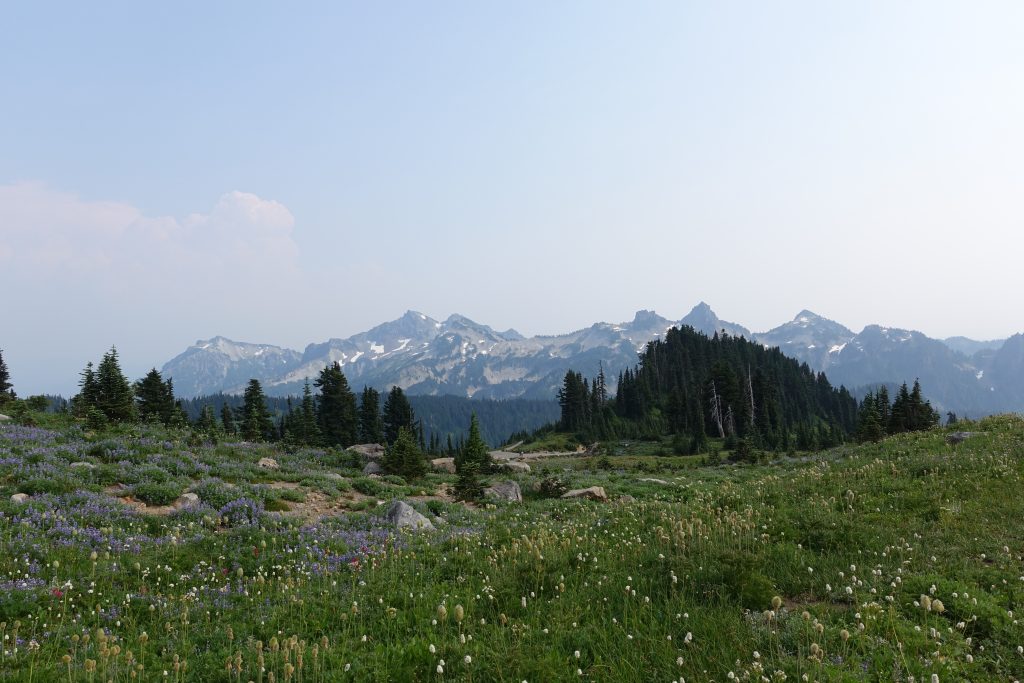 Phone and power brick charged, I dispatched a few messages.   Then it was time to dispatch my food carry.   From here it was going to be 3 days plus a dinner/breakfast combo on the last day, so I didn’t need a lot of food.  Into the trash went half my cheese and tortillas.   I had already left my new, full PB jar at Longmire, and I dumped about 2 lbs of extra food I was never going to eat.   Leaving around 6pm, I worked my way down some dayhike trails towards the road.  Because so many people stop along the road, there’s a bunch of herd paths along rivers and around parking areas, so I got completely turned around.   I eventually broke out my GPS app on the phone to make sure I was on the right one.    I found that they were marked, heading the opposite way, which didn’t help.

After sorting out the map, I got down to Narada Falls, and did the 0.1 mile side trip because why not.   Also here was a “comfort station”, a place with bathrooms, and just a sitting area.  I guess in case of rain, or when 1 person in your party doesn’t want to hike anymore. 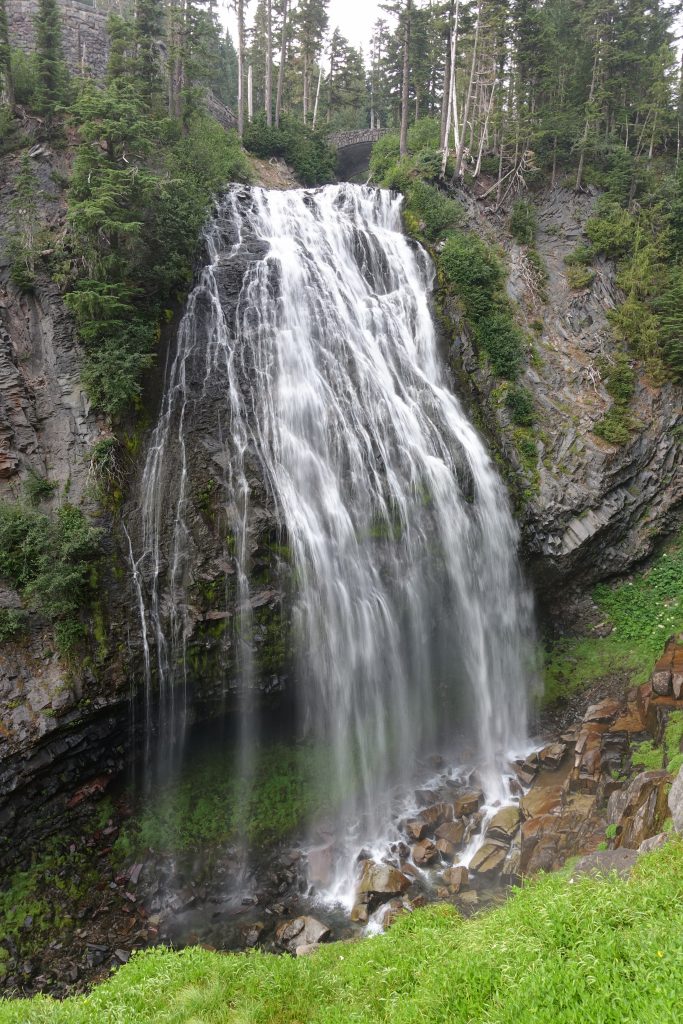 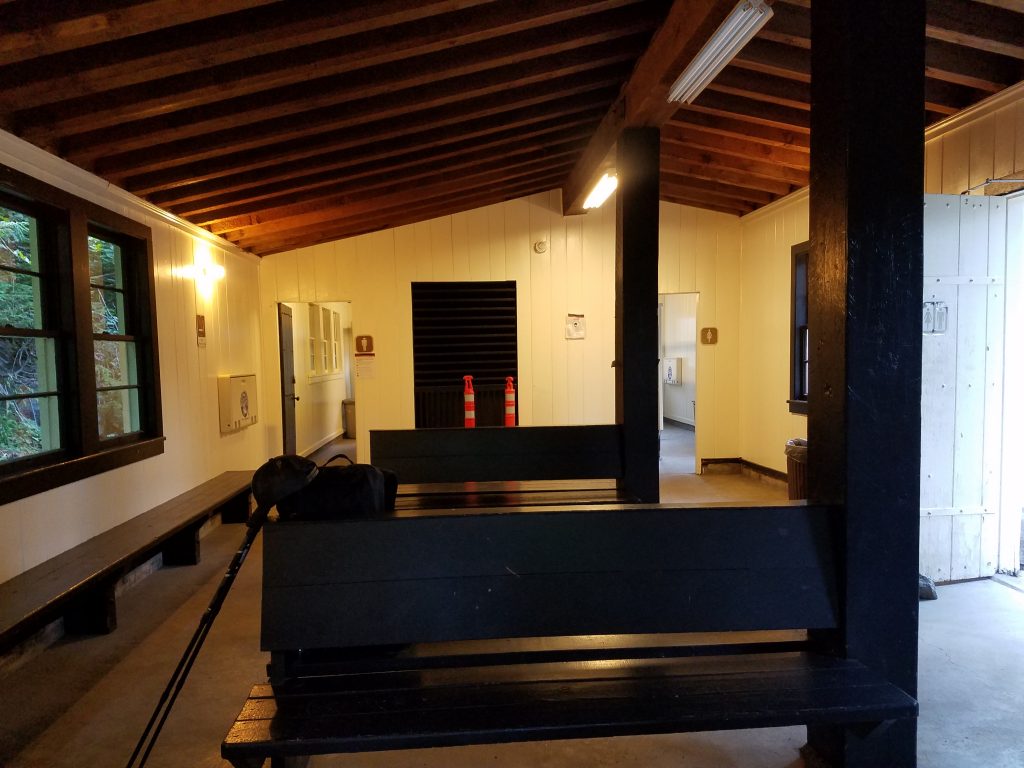 From here it was more downhill, bouncing down the trail in the gloaming until I got to camp.    Crossing is not recommended WHEN THE BRIDGE IS UNDERWATER. 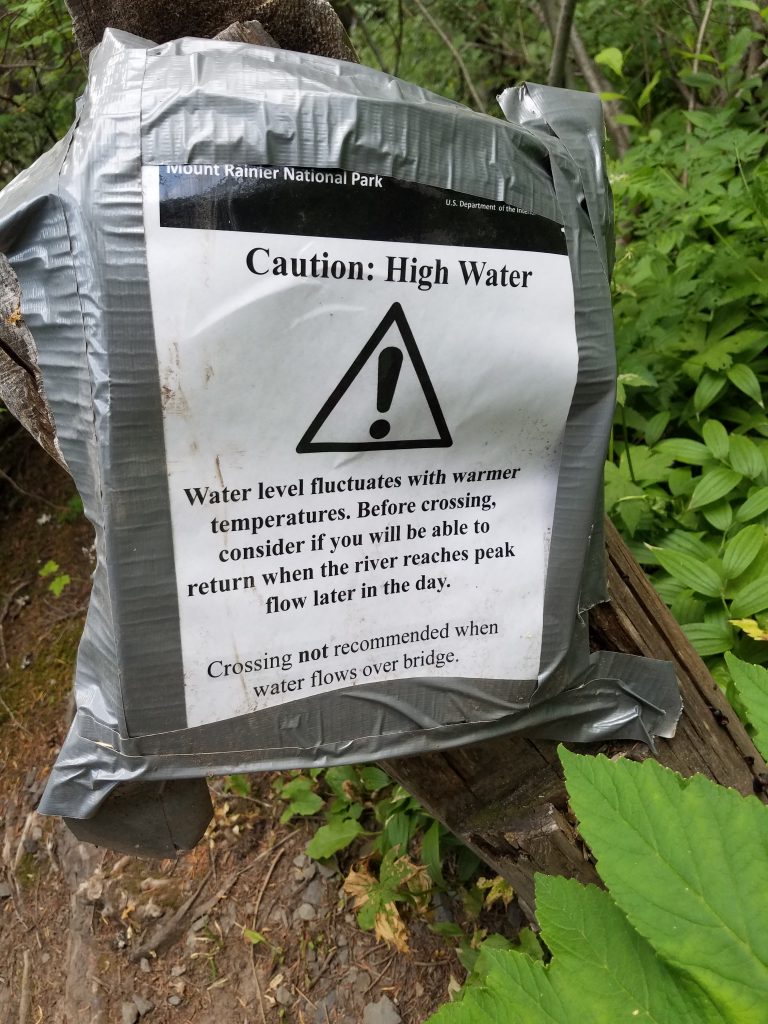 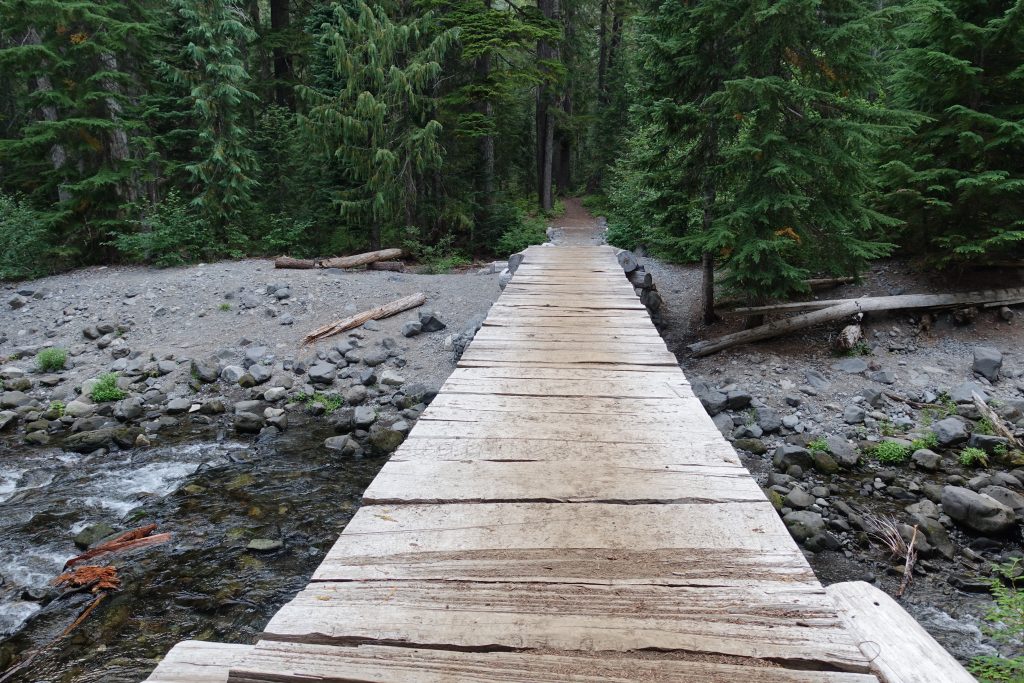 I found out that this was the water source for camp.    Fortunately I still had a full Smartwater bottle, plusI knew I’d hit this first thing heading back up the trail.    At camp I ran into the same 3 folks I met at Mystic Lake Camp.  It’s funny how schedules diverge and align.   Like we’d say on the AT or PCT, “It’s a long Trail”.   People would meet and then say things like “we’ll never see them again”.   “Canada is a long way away,” I’d reply.

Despite it being an easy low-hiking day, I was beat.   After a few chapters of The Hobbit, I was out like a light under the tarp.