Day 8 of my Wonderland Trail trip, from Paradise Creek past Reflection Lakes and Box Canyon to Nickel Creek camp. 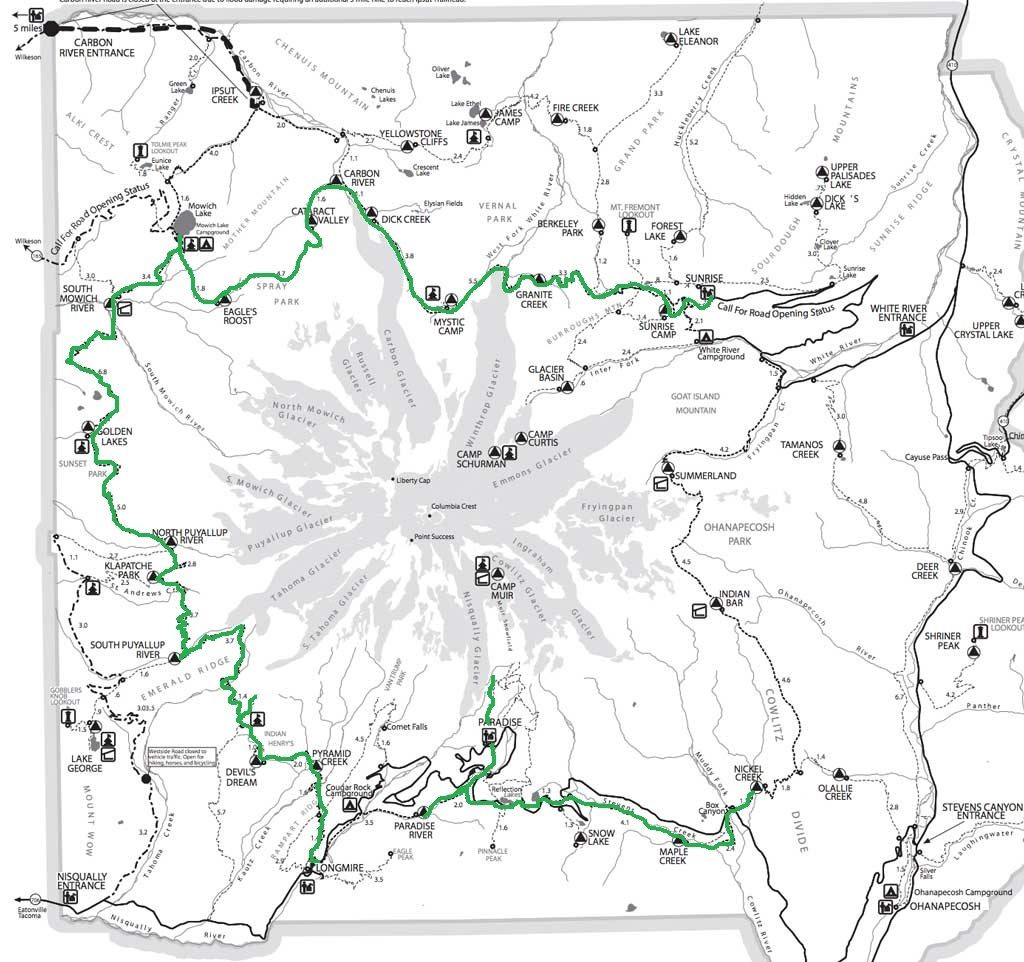 miasma – noun.  a highly unpleasant or unhealthy smell or vapor.

I woke up dry, under a dry tarp.   I should have skipped it.   But an ounce of prevention, etc. etc.   The first part of the hike was a bit boring, back up the trail from the previous day.   When I reached Narada Falls, I started chatting with a couple of guys there doing some serious photography.   By this I mean they had a a tripod.   We got to talking about the Wonderland, and one had done it years ago.   After wishing them a good day, I headed up the spur trail to the parking area and Comfort Station.   Because why not use a bathroom and drink clean water when you can?

The janitor’s closet was open, so I was able to use the deep sink to fill my Smartwater bottle, and it was only after I finished up with everything that I saw the “Non-Potable Water” sign.   So I dumped it out, and filled the Evernew bladder, walking outside to do the filtering.   I was sitting on the curb outside, when those 2 guys walked up.   “Hey do you want some cookies and candy?” asked the former Wonderland hiker.   “Hell yes!”, I said, and he returned a minute later with a baggie containing both, and also a couple of “Dude Wipes”.   I guess there’s no perfume because that would make them girly?

Powered by filtered water and cookies, I hustled along the trail for a mile or so before hearing a chainsaw.   Since we’re in a National Park, not a National Forest Wilderness area, I guess they’re legal.   Shortly I came up on a couple of Park Service guys clearing overgrown trail.  A quick chat later, I learned that catching Reflection Lake early before the wind picked up was key.   I put my foot on the gas up a big series of switchbacks (well laid out, thanks NPS), and got to the Lakes in time. 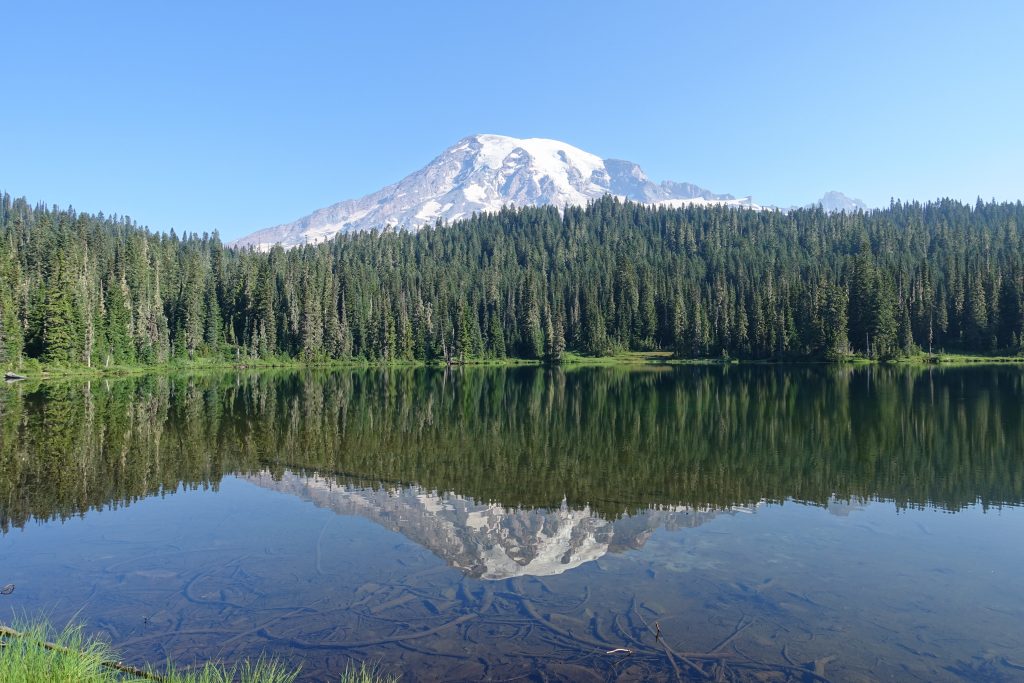 There I chatted with some people, one of whom had lived near Seattle for about 50 years.   In her time the glaciers have shrunk 50%, she claimed.   Might even be true.   I ate more cookies, and mixed up some powdered coconut water left over from my PCT trip, still lingering in the bottom of my food bag! 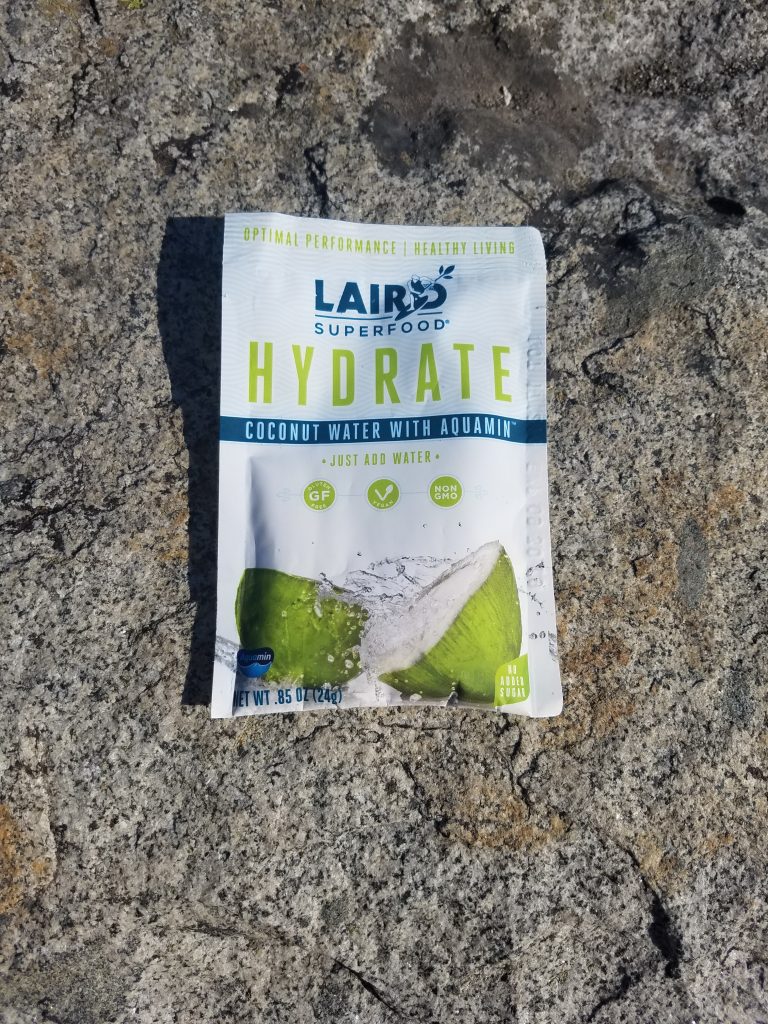 This was the 3rd (and last) day of relative “civilization” on the trail.   From Pyramid Creek, through Longmire and Paradise, I was definitely in the more populated areas of the Park.    I was looking forward to getting back up into the country. 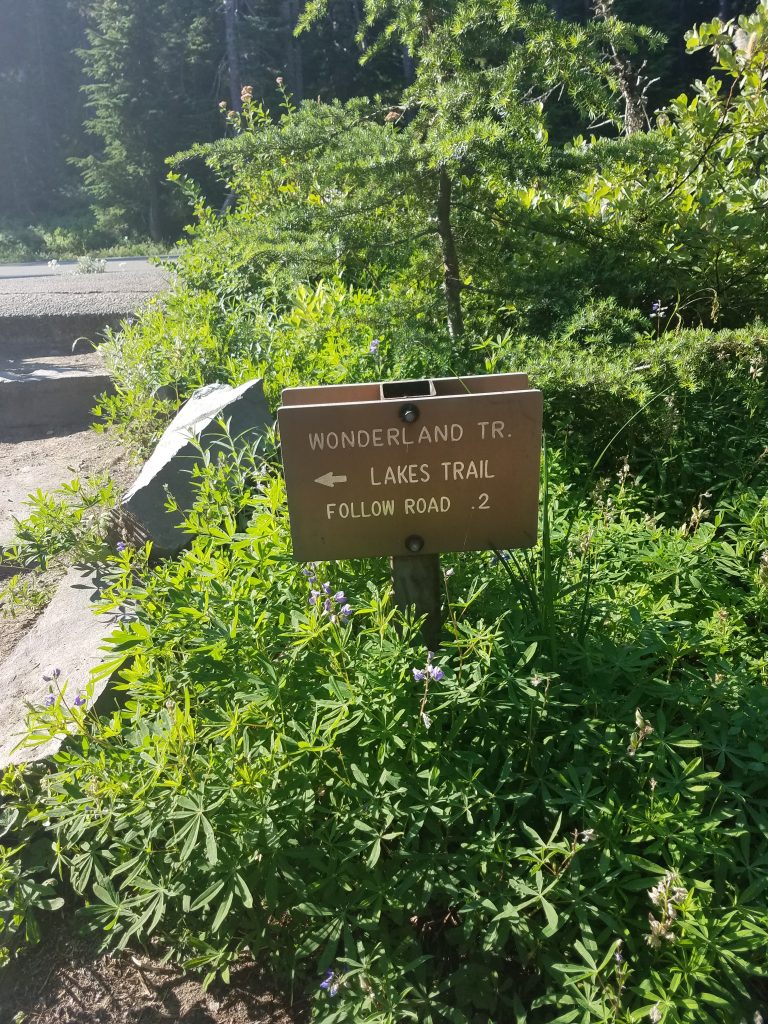 Trail actually is on the road for a quarter mile. 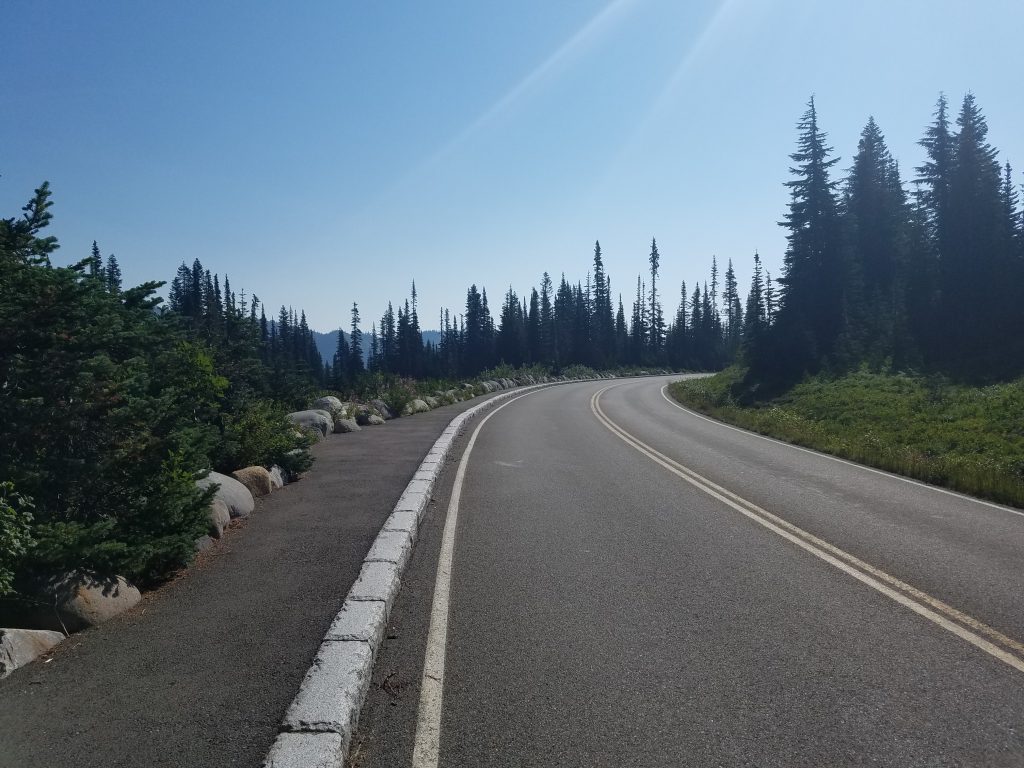 The trail fell of the road down into a steamy valley dropping lower and lower to Stevens Creek.  Early on it was big pines, but turned more and more into brambles and maples.   The suck factor was offset slightly by the presence of thimble berries.  The humidity started to climb.  I started to get warnings from a few hikers going clockwise about some bad trail.   There had been a washout/rockslide, but nothing to really worry about, people had already been across it and it was only maybe 60 or 70 feet.   It was not rough trail FOR 5 miles. 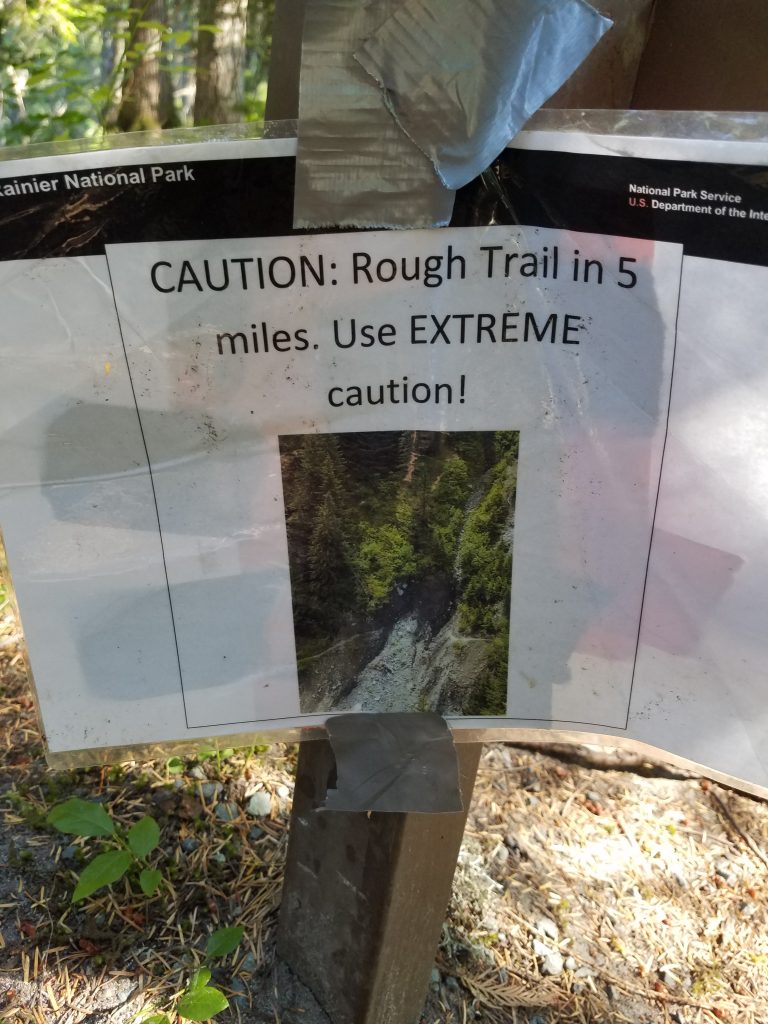 About halfway to Maple Creek Camp, this stream was pretty refreshing, and I had a quick bath and did laundry.    I ran into a couple of kids going the other way, on Day 1 of their trip.   Super excited, it was nice to see. 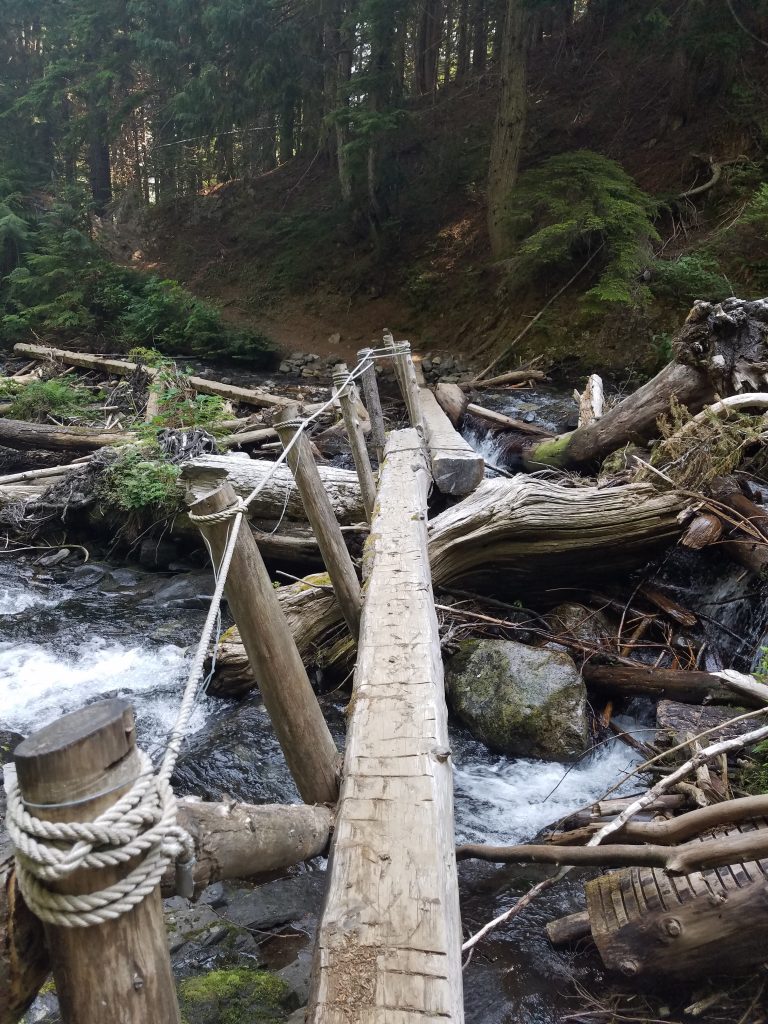 Very easy and navigable trail.   I met a fellow going the other way who I had seen on the other side of the mountain some days back.   He had a “walk up” permit on a 6 day schedule, and was making it work.   We talked a lot about hiking and the PCT came up, he said he was really worried about “the passes in the Sierra” and how steep they were.   I explained that the PCT was cut for pack stock and was never more than 5-600 feet per mile, and the footbed was easy.  My final words were, “If you can do the Wonderland in 6 days, you will destroy the PCT.”    He seemed very excited. 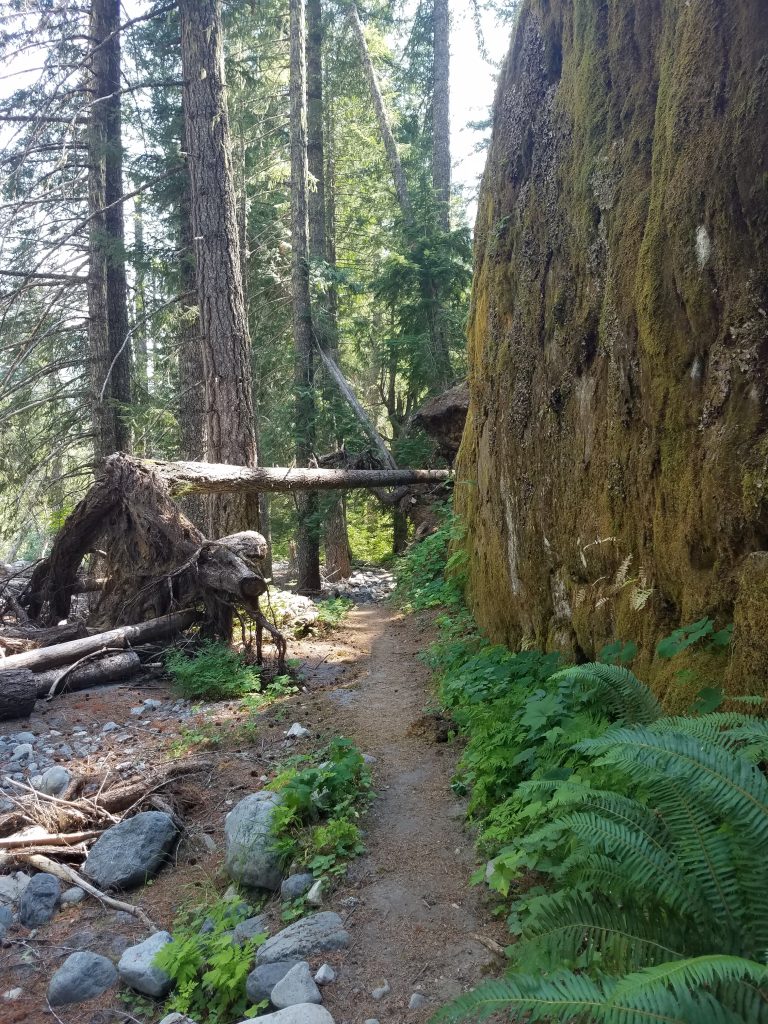 It’s hard to see here, but this is the hollowed out shell of a giant pine, long dead and withered, with another tree, a hemlock, growing up inside it.  These kind of old deadwood are called “nurse logs” and are a very important part of the forest.   They act as stores for minerals and organic material, and provide a bed for new plants to take hold. 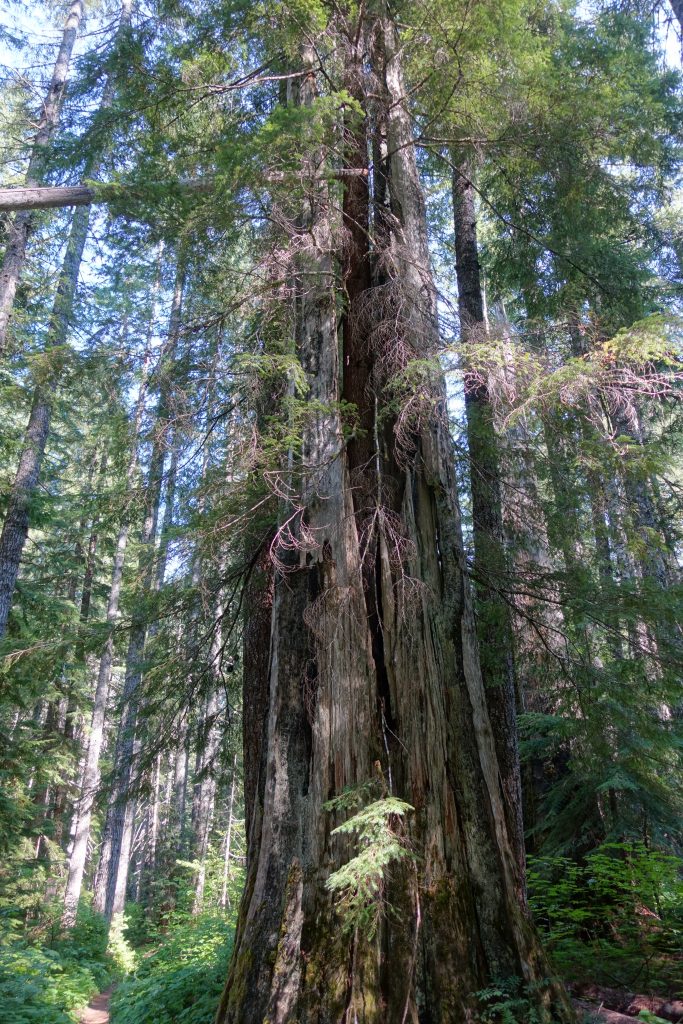 Near Box Creek Canyon, I chatted with 3 people heading the other way around.   They admired my small pack and couldn’t believe I was doing the whole thing.   We talked about trails, pack weight, etc.   One knew my name from the Internet!   “Smokebeard?   Did you hike the PCT a few years ago?”   My 2nd Internet fan!

A lazy afternoon got me to the Box Canyon area around dinner. 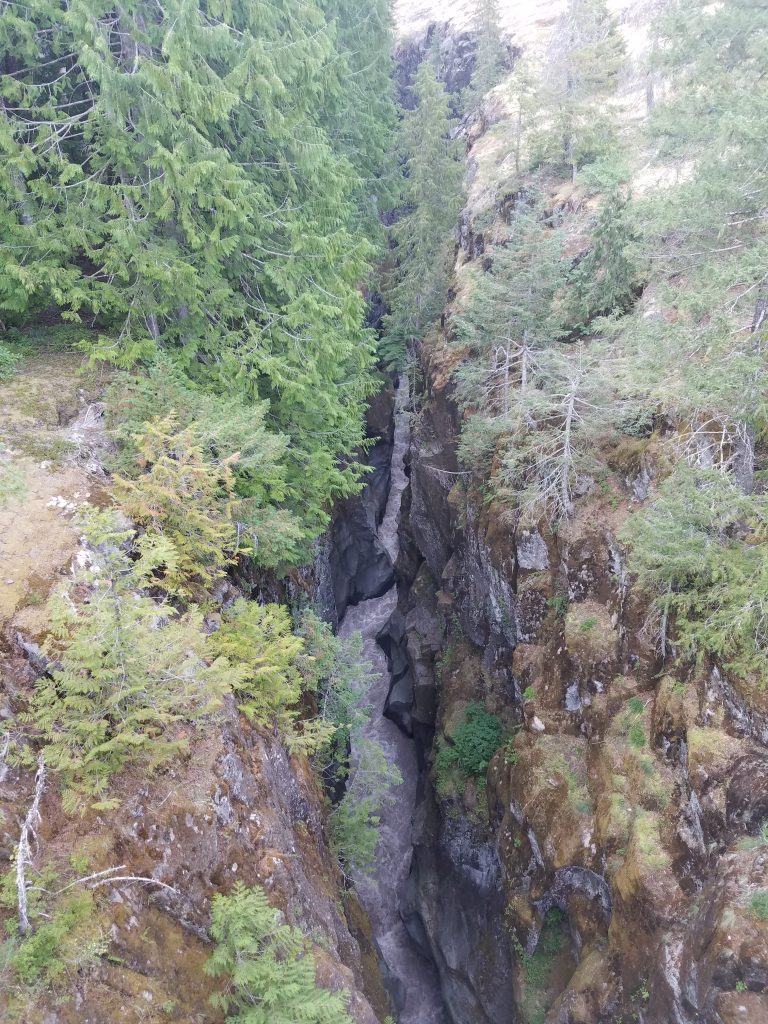 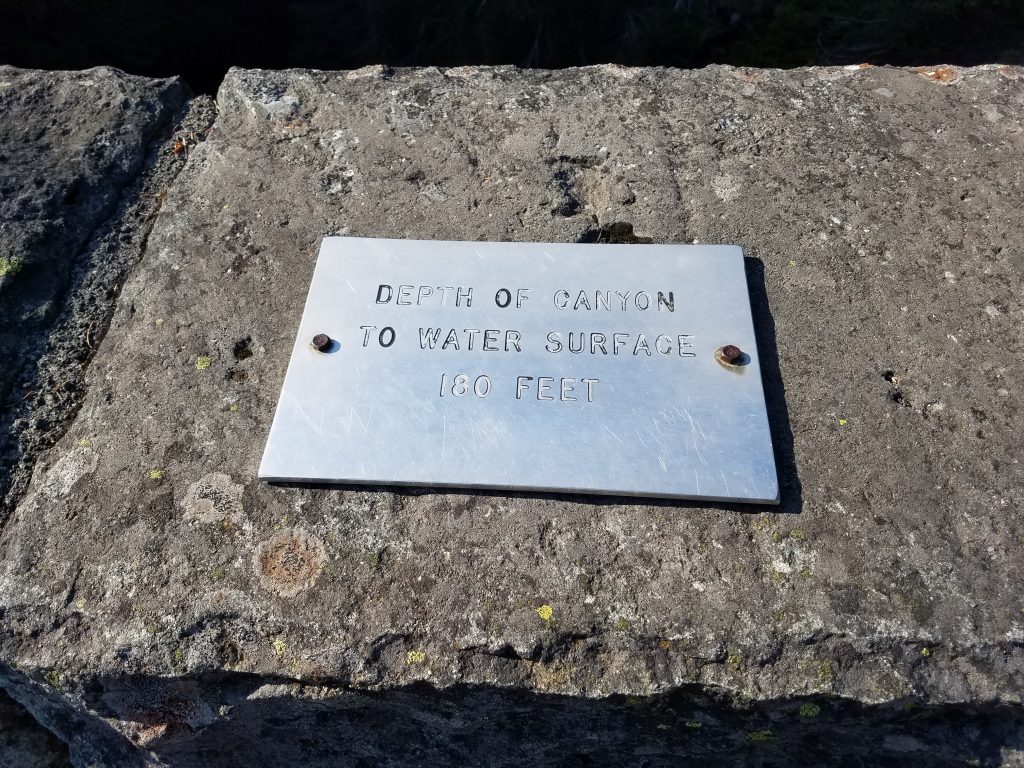 Since I had about a mile to go and 3 hours to do it, I took a long break at the parking area, eating dinner and enjoying the presence of a bubbler, aka water fountain.   A couple walked by after doing the little tourist loop.   The woman stopped and asked me if I was doing the Wonderland.   Perhaps the sweaty shirt, the miasma of dirt, or the fact that I was sitting there with my shoes off, hiker-trash style tipped her off.  When I told her I was, they kept walking a bit, stopped and had a discussion.   I head the word “chips”.   Then she turned back to me.

“Would you eat the rest of a bag of jalapeno potato chips?   I don’t like them, I’ve only had a few.”

“Yes, I would eat those chips”.

EPIC trail magic, and the second of the day.   Even better since I was low on salt internally, and had neglected to pack Fritos in my maildrop!   They were kettle chips to boot.

We got talking about the trail in detail.   They were from Boston and had done a lot of New Hampshire, and were thinking about trying the Wonderland.   I told them if they could handle Franconia Ridge or the Presidentials, they’d have no trouble.   The same was basically true for the bugs – if you can deal with southeastern New England woods in summer, or the Maine woods earlier on, the mosquitoes and flies on the Wonderland are very manageable. 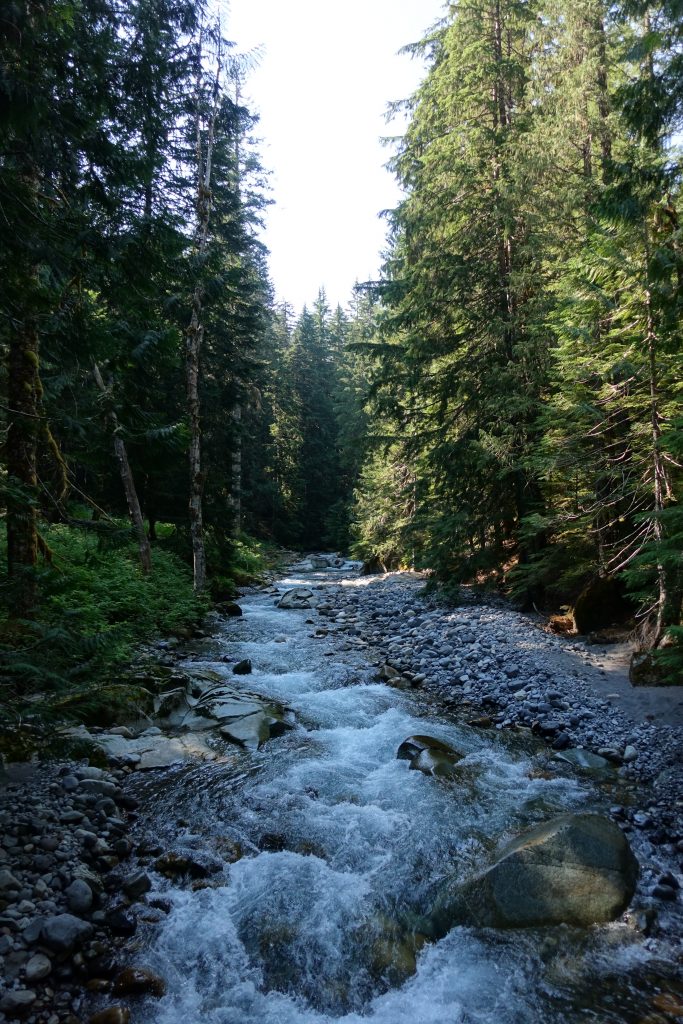 Nickel Creek Camp was nice, another 3 site deal with a group site and thunderbox.   The group site nearby had a few loud yahoo types, but they quieted right down at dusk.   Not a cloud in the sky, so it was cowboy camping for me. 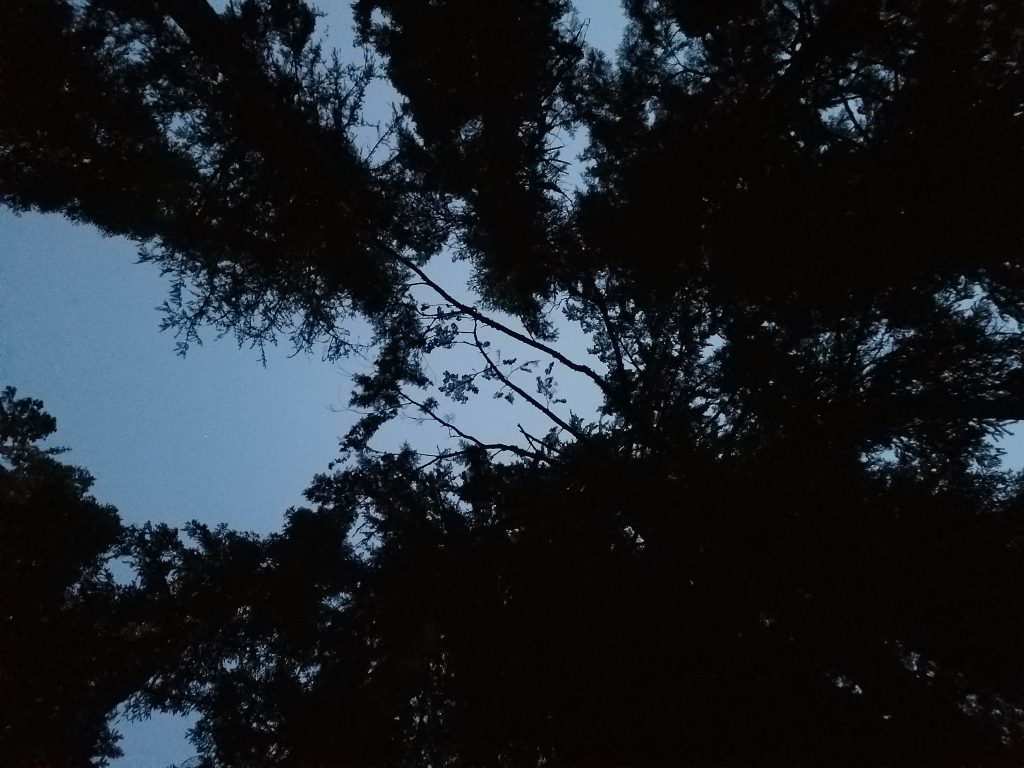