“I have no memory of this place”, said the Smokebeard.  No longer the Greybeard leading the Fellowship, I’m now just another old, slow hiker.  And it turns out that is just fine.

After doing many chores and eating a lot of food, we all managed to get out of Wrightwood at about 4:30.  Because Cheese was leaving us the next day, everybody packed out a bunch of fancy camp food for dinner. Painter organized a bunch of kabobs, snacks, and wine. 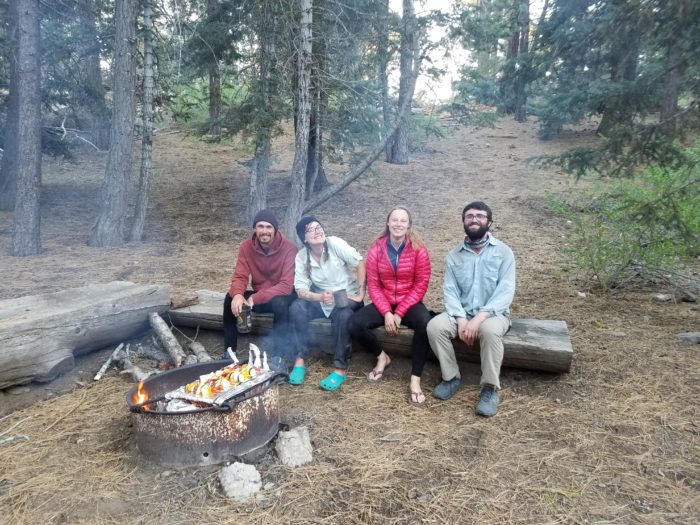 We then began the first of a multi-day , twenty-plus mile a day stretch.  First we climbed Mount Baden Powell which at 9300 plus feet is the highest point on the Southern California Section of Trail. Resting at the top in the thin air, we were besieged again by honey bees. 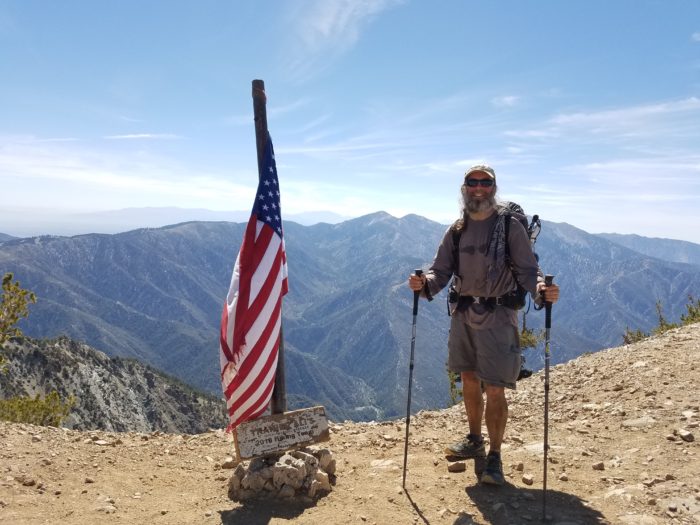 For those of you following along at home, if you want to pretend you climbed the mountain with us, do the following: go to the gym, turn the heat up to 80 degrees, wrap a scarf around your face so you are hot and it’s hard to breathe, put 30 lb of weight on your back, set the treadmill to its highest setting, and walk on the treadmill for 3 hours. That’s what climbing the mountain was like. 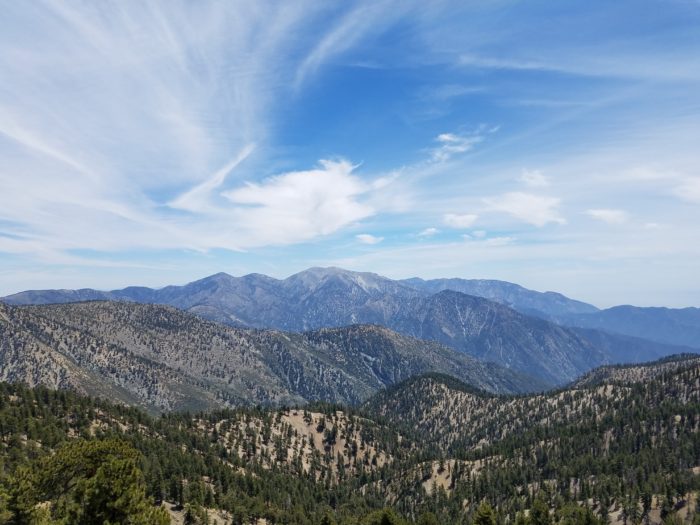 The views in this section were some of the best to date. It’s really wild looking, and there’s no cell signal.  You basically can’t see any sign of civilization. However, there are occasional road crossings which had very welcome trash cans and toilets. 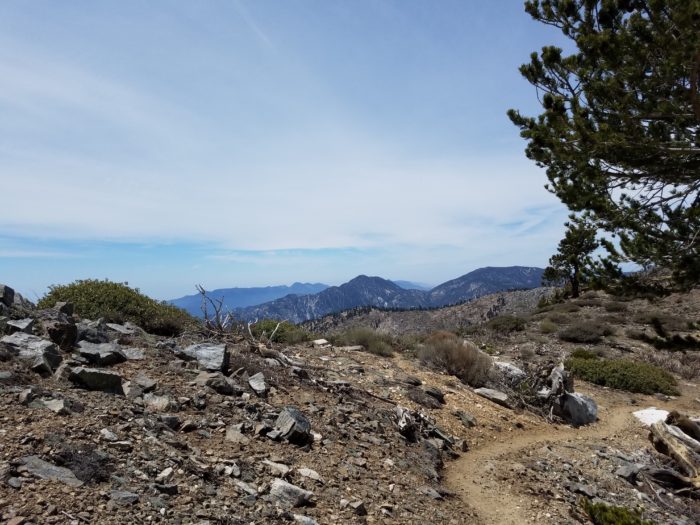 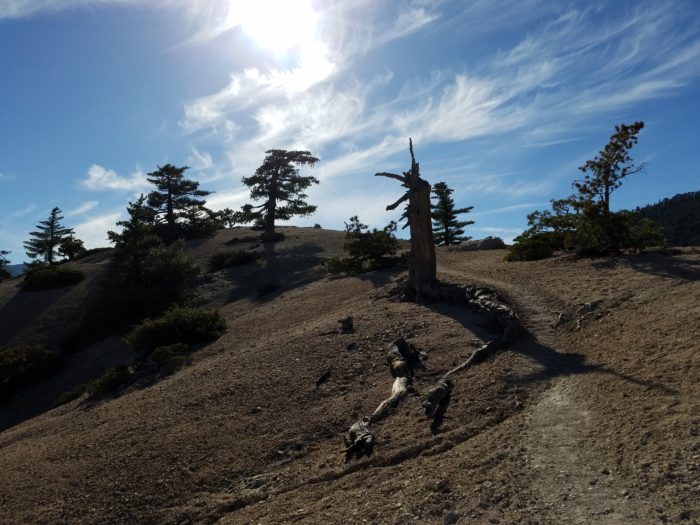 That night we camped at a state campground which had not yet opened. A former thru-hiker named Cloud Rider was with us most of the day and it was great to talk to him to hear his perspective on this year.  The next day got a hot and gross, and our expected campsite turned out to be an open flat space on a ridge in both full sun and wind. 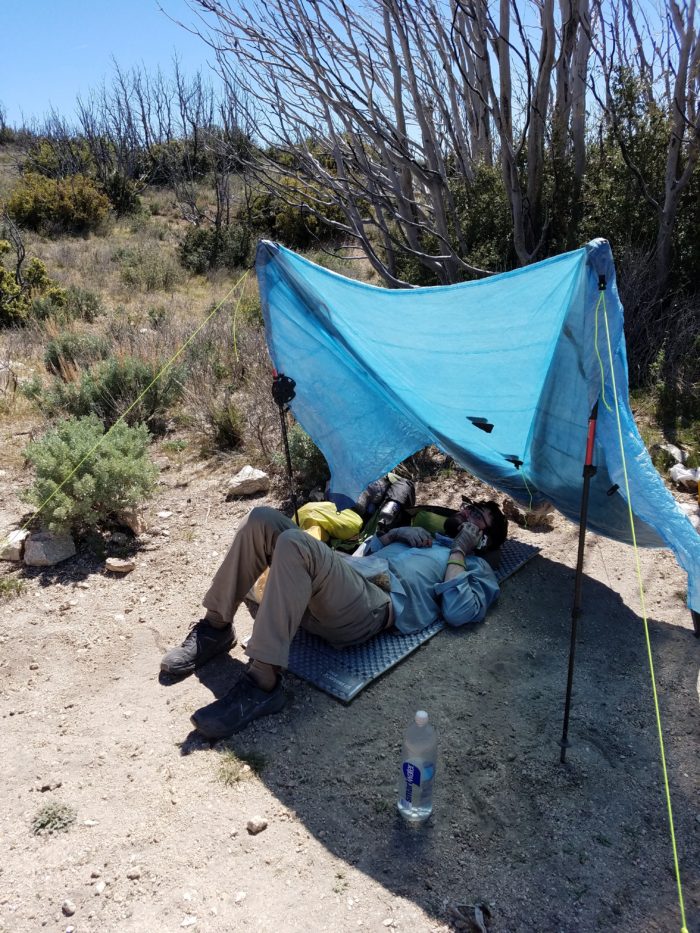 After a short break we pushed on and came off the ridge to a fire station which generously allowed us to rest and recharge on their patio. As a bonus, some trail magic was there, so we had a lot of sodas and chips.

Getting up at 4 the next morning we pushed on to get down off the ridge. There was not a lot of water so we time the day carefully, resting during the heat. This was a 22 mile day, ending down in a canyon as some weather and fog started to roll in. Fireball, Cherry Bomb and I squeezed into a small cowboy site in the wash. 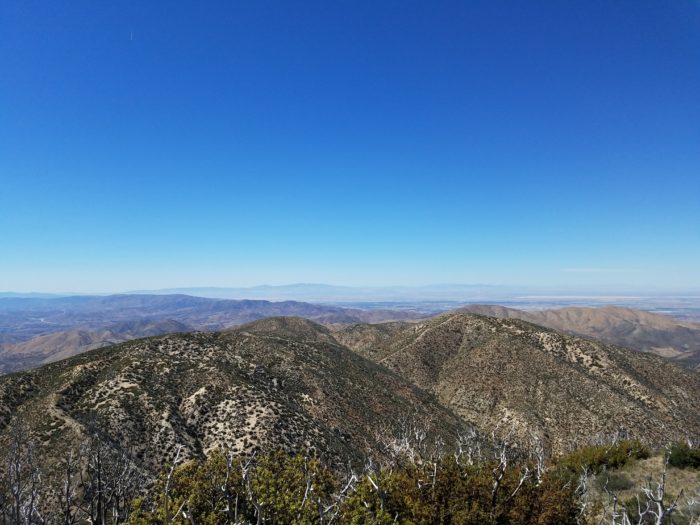 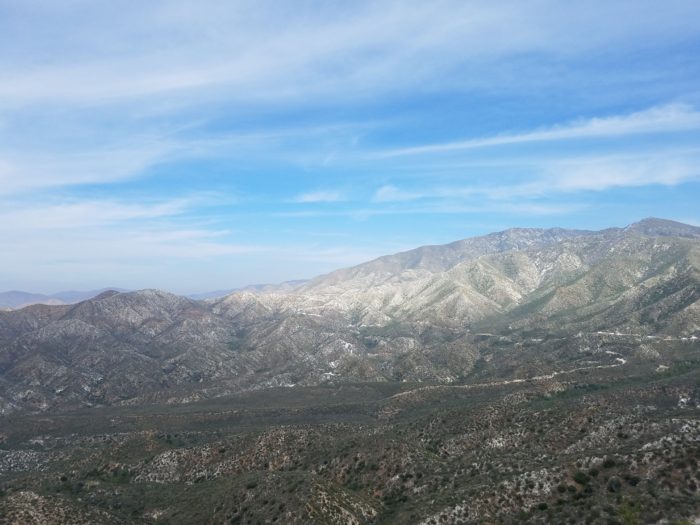 After a cold and wet night we woke up two solid fog. From our campsite it was only a few miles to a KOA Campground, where we got some water and continued on, eager to reach hiker heaven in Agua Dulce. 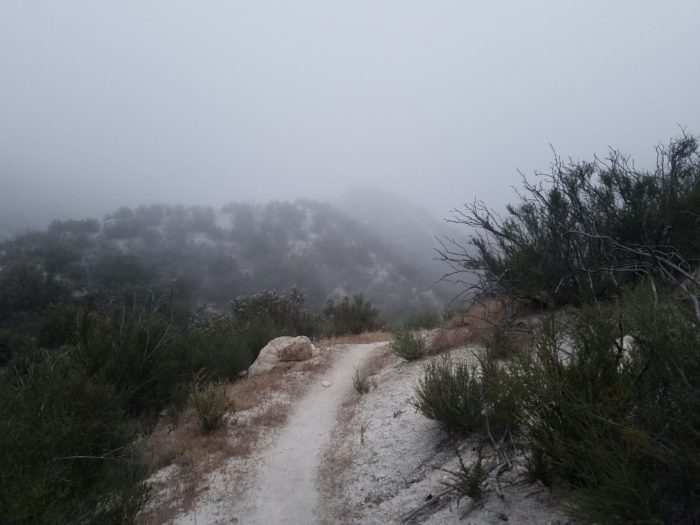 After the campground, we passed the golden spike monument, where in the 90s, the PCT was finally completed as a continuous path. 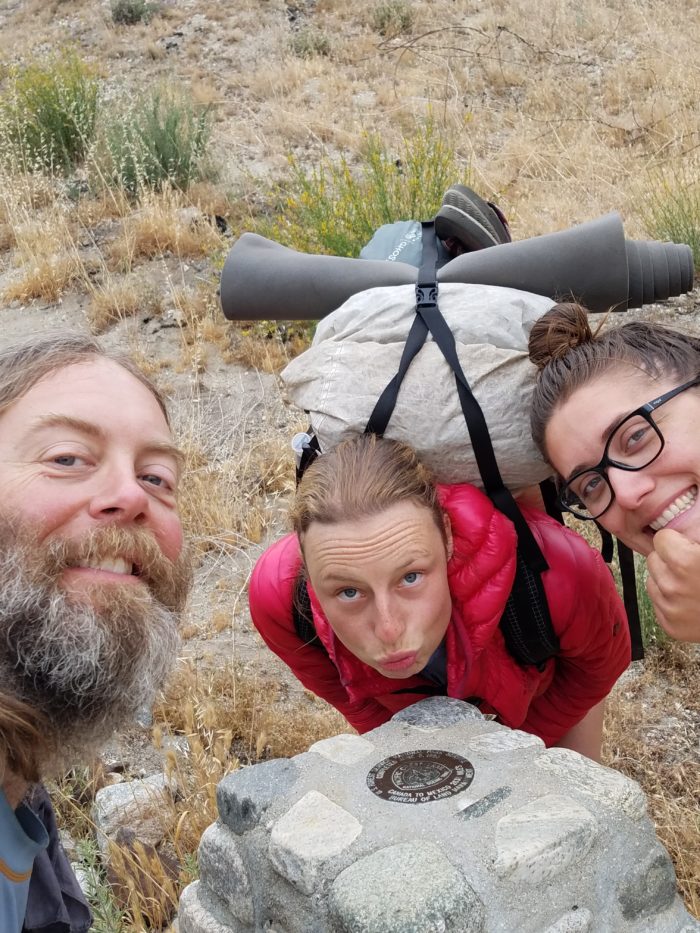 Fireball stayed with Cherry Bomb and I most of the day due to some nagging injuries. Together we hiked through the Vasquez Rocks State Park, keeping an eye out for Gorns. We actually got lost for a bit, trying to make our way through the maze of footpaths. But as a bonus, we got to do some off-trail rock scrambling and dead reckoning so that we could get back to the trail. 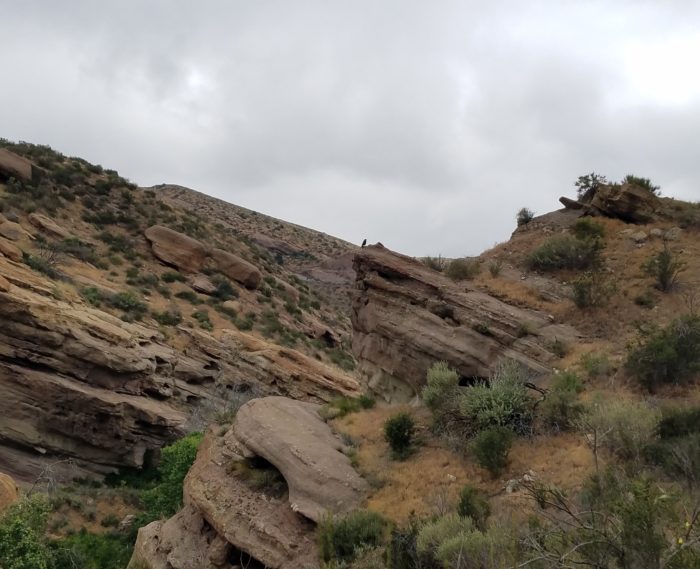 After a bathroom break and lunch at the Park Visitor Center we trudged on into Agua Dulce. Here the Saufleys have hosted hikers, providing showers, laundry, tent space, and bathrooms for the last 21 years. Early in the afternoon we reached the famous Hiker Heaven. And were greeted by Rosie. 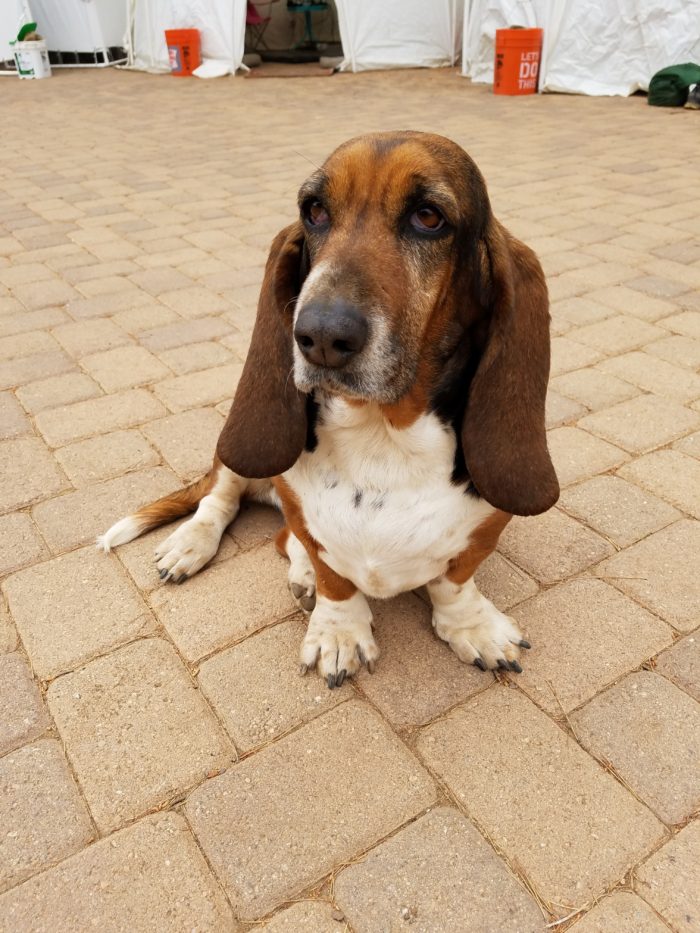 After a shower and laundry, we caught the 6 p.m. pickup truck into town. We managed to cram 23 hikers into and on top of the truck. Since pizza was the only vegan option for Cherry Bomb, we chose pizza. When we ordered a vegetable pizza with no cheese, the guy asked if we wanted vegan cheese instead. Oh yes, we replied. And it was good. 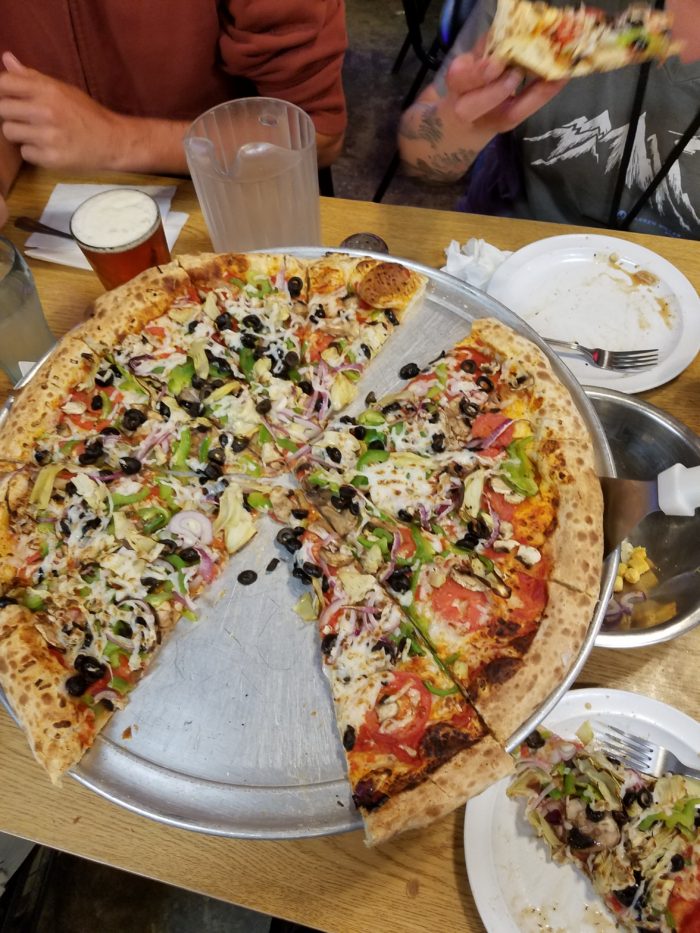 We had committed to taking a full 24 hours of rest. Because of this, we loitered around until the 1:30 p.m. ride into town. We hit the grocery store like a plague of locusts, got our food sorted, and were on the trail by 2:30.

Next stop, Tehachapi., after the infamous Los Amgeles  Aqueduct and the wind farms.