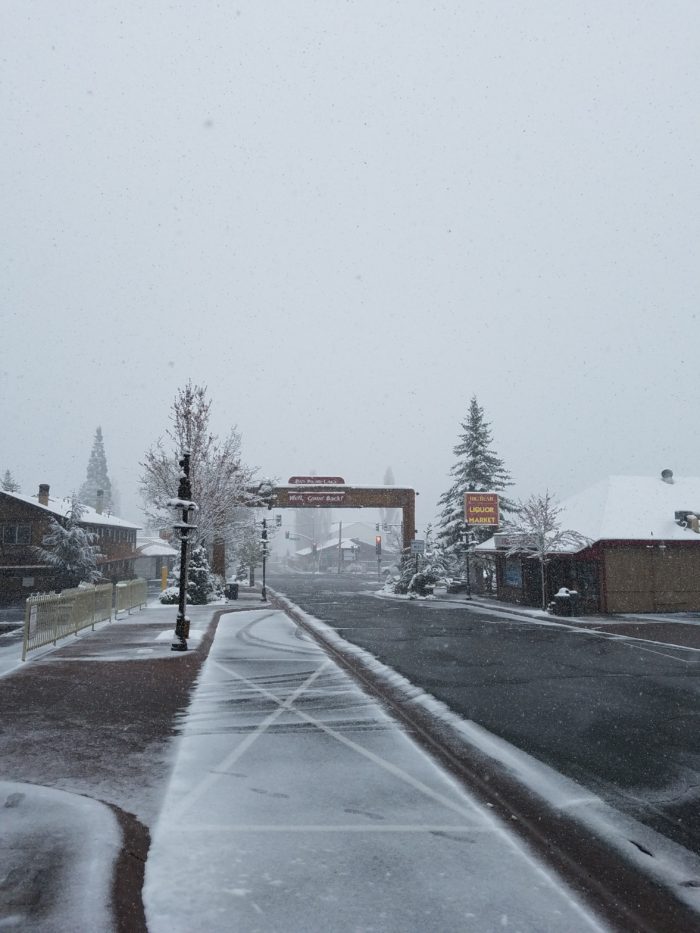 We woke up early but there were two inches of snow on the ground, so we all rolled over and went back to sleep. Once we got up, we started feverishly watching the weather report, praying that it would clear by noon.  We had taken a full day off and were eager to get moving on to Wrightwood. After a giant breakfast, to pass the time we watched a movie and took naps. By about two we managed to get back on the trail. Hiking in from mile 266, we were treated to snowy views on one side and the flat desert on the other. 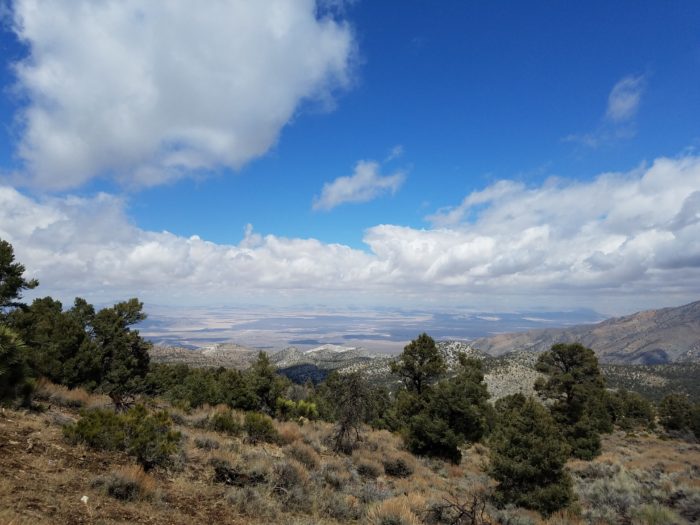 At 275 we sat down for dinner, and both Happy Feet and Gargoyle rolled in. It looked and felt like a cold night was coming on, so we all went to bed early. I awoke to a sheet of ice covering my tarp and anything I had left outside my tent. I was treated to a science demonstration in the morning because my filtered, and thus pure, water was super-cooled. It had not yet frozen and only froze once I added drink mix to it. 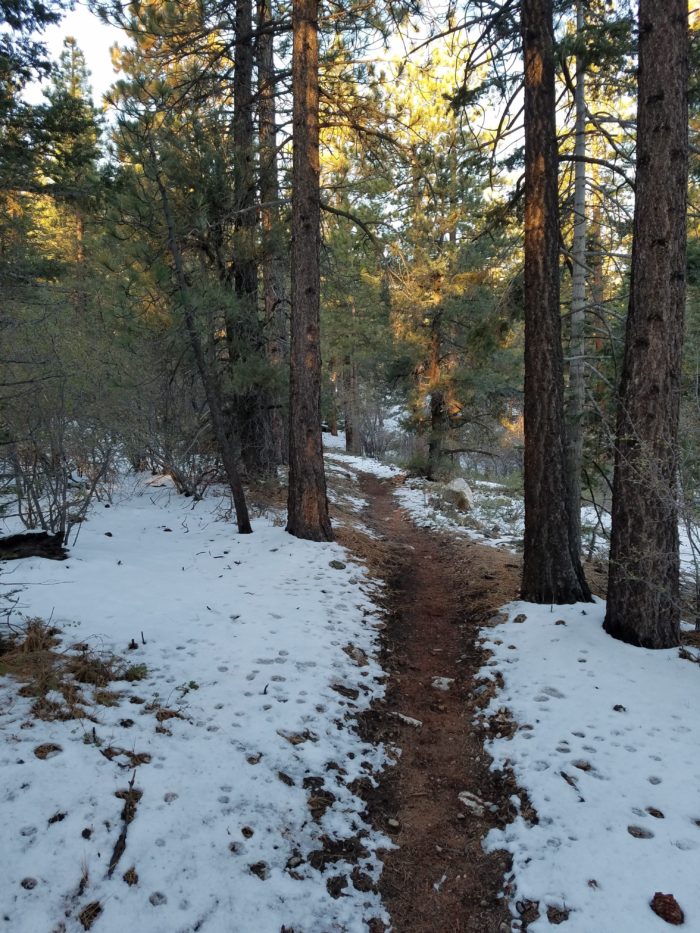 We did a 20 mile day to mile 295, ending at Bench Trail Camp.  The walk was great, winding our way along pine covered ridges topped with snow.  Once I got to the bottom of the canyon, I spent a little time in the creek. I emerged slightly less dirty.

Amanda picked up the trail name Cherry Bomb while we took a break.  The power brick in her backpack decided to catch on fire. Smoke begin pouring from her backpack and quick thinking by Cheese and I salvaged most of her stuff. 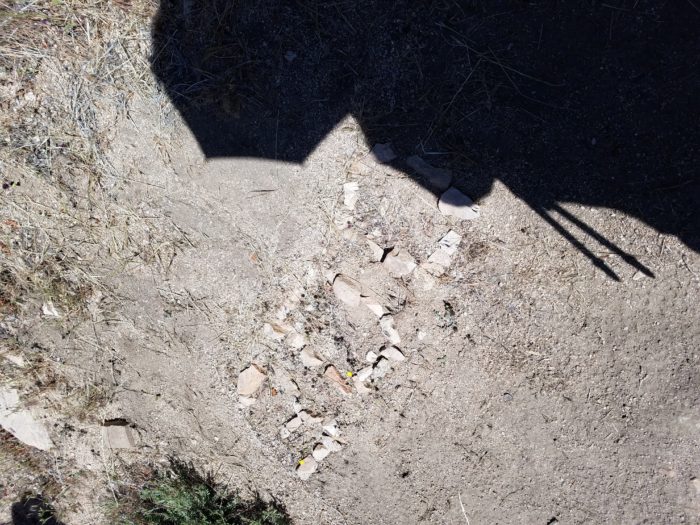 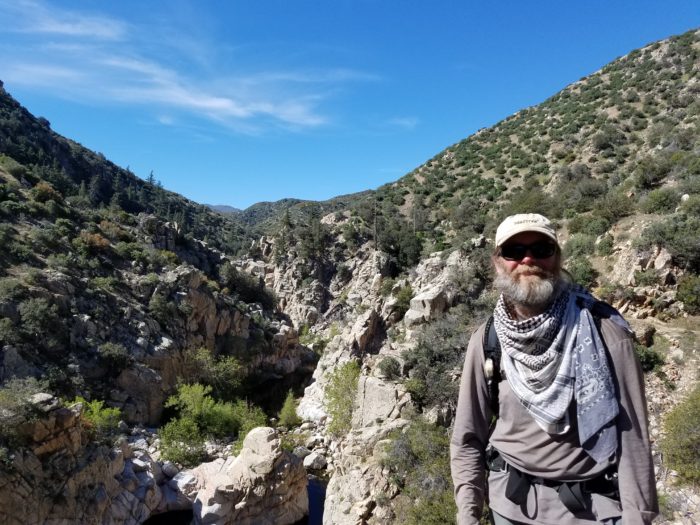 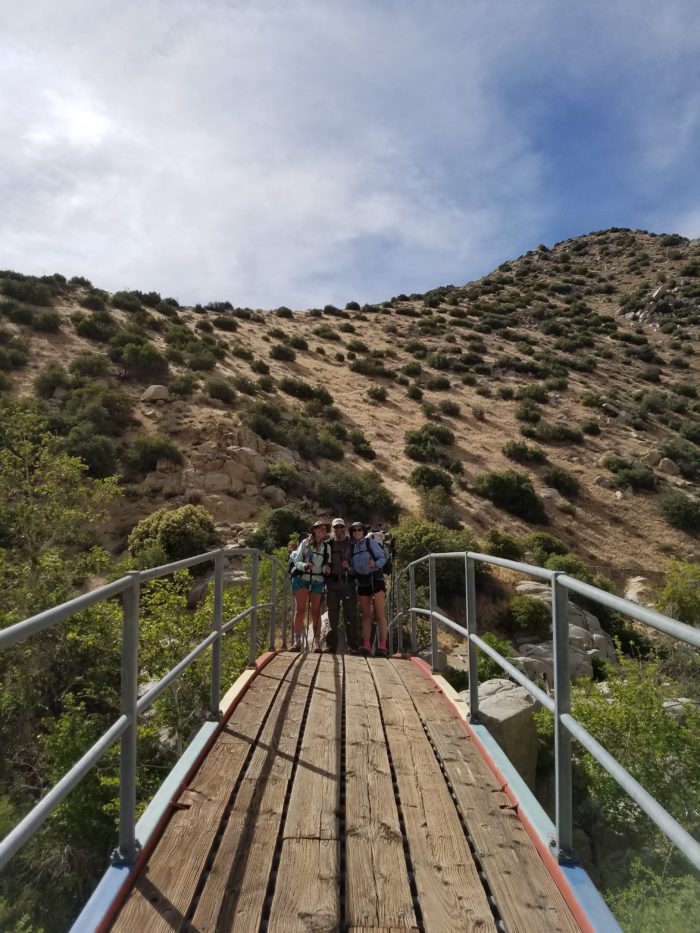 The next day we did a 23 through Deep Creek Canyon and it’s infamous hot Springs, ending up at mile 318. The springs were grungy yet shady.  I chose not to go swimming in hiker foot soup, although I did take a nice long break.  Lots of naked people; as Cherty Bomb said: 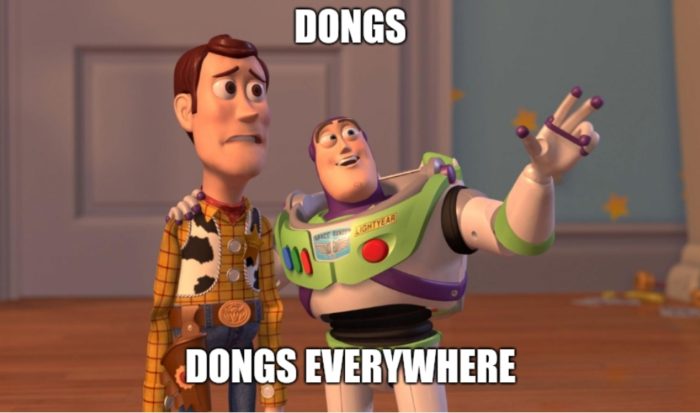 I was treated to a barrage of passive-aggressive comments from a naked woman, on topics ranging from nudity, the importance of personal space, and finally white privilege.  Her approach to dealing with the last was apparently to lament its existence to other privileged white people, while doing long distance hikes each summer. I was also treated to a very detailed view of her personal grooming habits when she chose to bend over and get something out of her pack while standing right in front of me.  Personal space anyone?

The last few miles were a horrible grind as we were all tired and the temperature seemed to spike.  The dam spillway was cool, theres a great echo chamber between the two sides of the concrete structure.  We spent a good half-hour recovering from the heat and making loud noises. 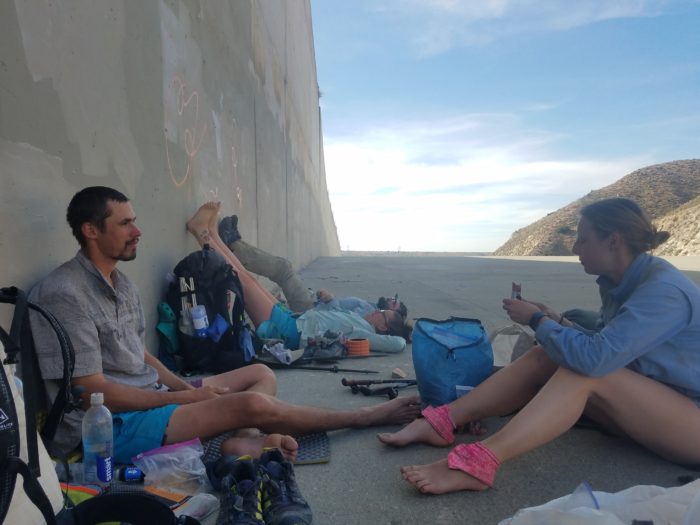 Our plan was to get up at 4 in the morning to watch the rocket launch, however, we were looking the wrong way and stuck in a canyon so we missed it.

We did another 20 on Cinco de Mayo after a six hour break at the lake. Painter organized a giant pizza party and even picked up some of the tab. We hiked on, and then Amanda and I switched on our headlamps and night hiked to mile 340, just outside Cajon Pass. 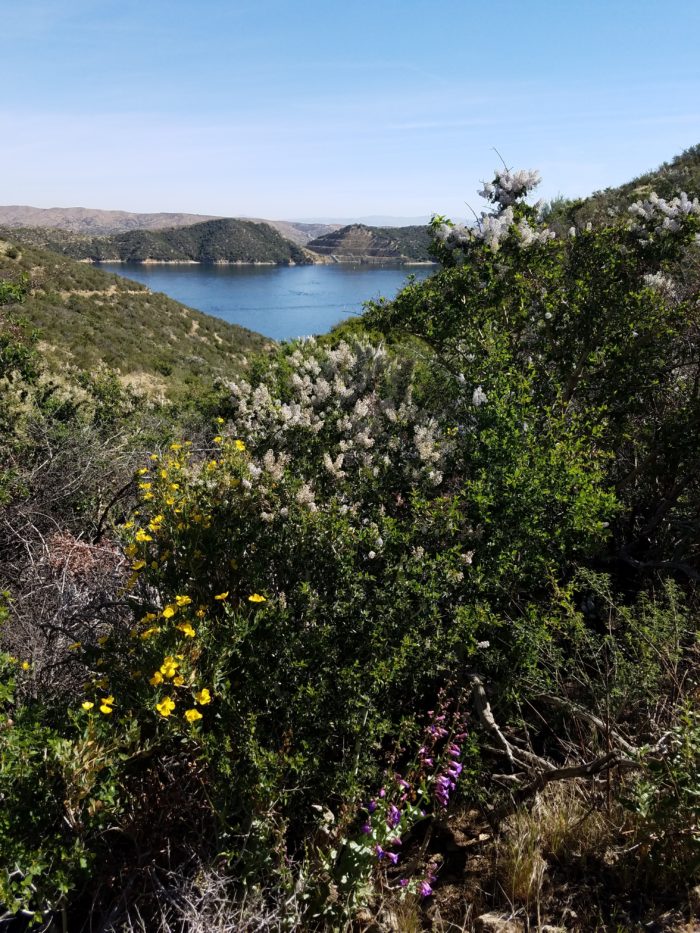 Cheese and Eva were there too, and we all spent an uncomfortable night gradually sliding down the sandy and prickly slope. 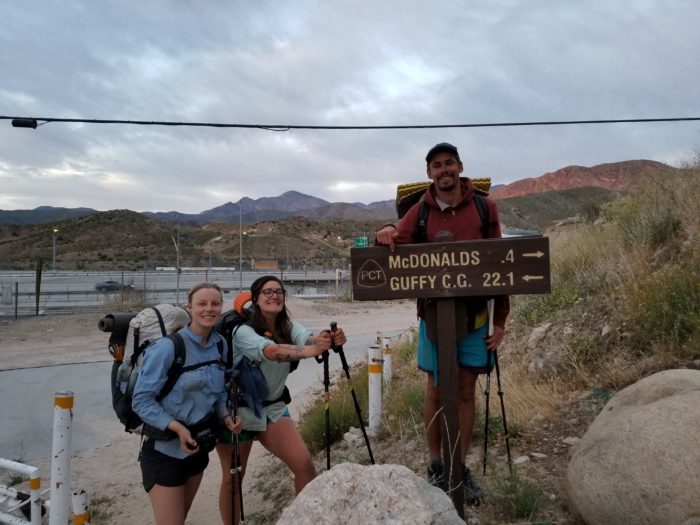 We made it to McDonald’s by about 6:30 in the morning, we’re we were greeted with the epithet of “Hiker Trash” by a guy named Proton who had done the trail in 2016. I also had one of the McDonald’s customers approach me with a plate of pancakes and ask if I needed any food. I felt like I had arrived on the scene at last.

While we were waiting in the shade at the 349 cache, a swarm of bees buzzed overhead. We all hit the dirt until they passed. We then foolishly did the 3000 ft and 9 mile climb under full sun. At about mile 355, another swarm of bees, this one larger, came roaring up the trail at us. Again we hit the deck.  Cheese summed it up the best when he said, “I hate this $%#@ place”.

We got most of the way up the ridge and found a flatish if windy spot to cowboy camp. The next morning I set out first with the rest behind me.  This would be my last day on trail  that my feet already knew.  I made great time along the ridge despite the final pointless ups and downs. I got a text message from Eva who said that day bailed out and went down the Acorn Trail.  Since we were not staying in Wrightwood, everyone was antsy about the time we had to do chores. 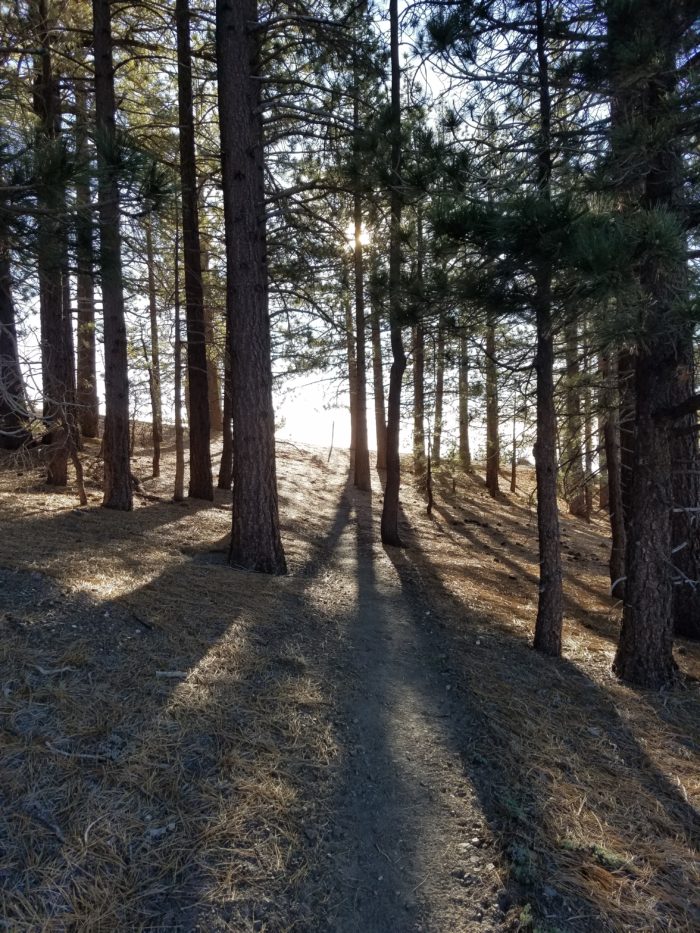 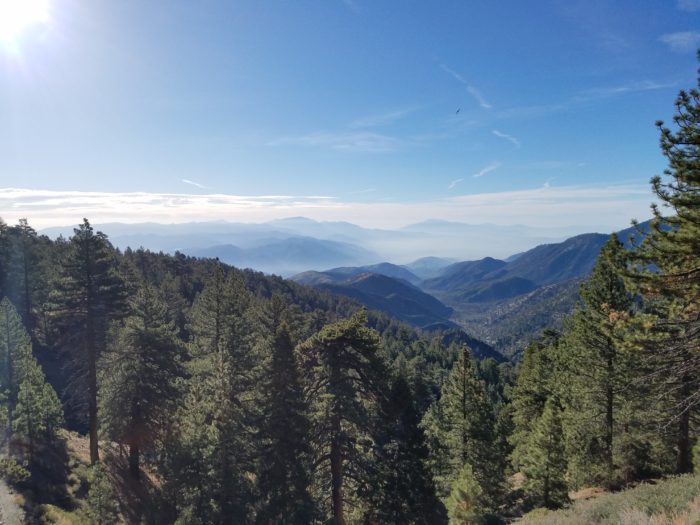 It was surprisingly emotional as I wound down through the ski run to the road.  Just like last year, I hit the road, pooped, and got a hitch right away. 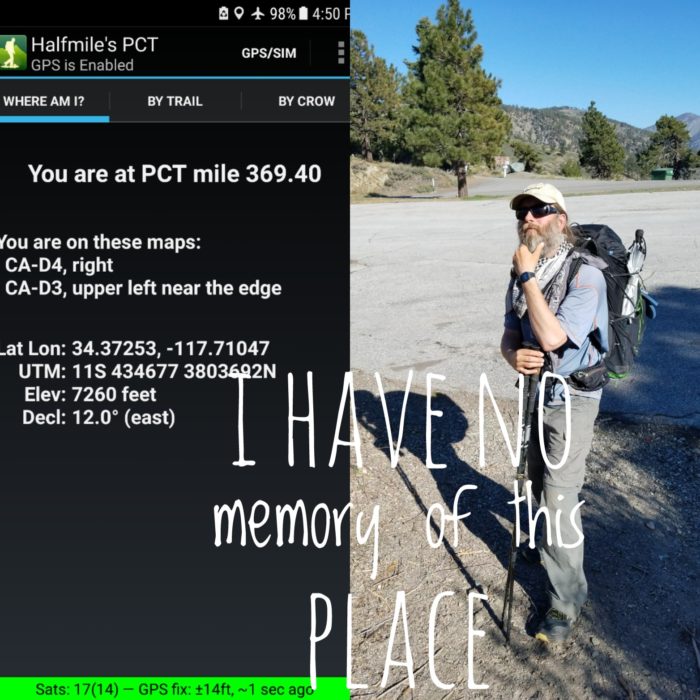