Taking advantage of Indian Summer, I hiked through the Buck Hill Management Area in northwestern RI. I’ve done this hike many times, but this time I took a different approach – I went backwards – clockwise this time. Try a familiar hike backwards some time, it’s eye opening what you see, and what you’ve missed.

The road in is a little sketchy, but if you have a higher clearance vehicle like a truck or even an SUV you’ll be fine. It’s fine for cars too, but you have to pick your way with some care. I arrived mid-morning, and saw that about a dozen other people had the same idea. The parking lot was as crowded as I’d ever seen it, and I heard shotguns off in the distance. It’s hunting season, so wear your blaze orange. I did see two hunters over the course of the day, shotguns in hand.

Most of the hike is on woods roads, or what’s left of them. Since it’s actively managed, I imagine that DEM trucks make their way through from time to time. In general, it’s a big loop, about 4 mile. Going counterclockwise like most do, you start off at a dammed up wildlife marsh, go through some woods, and come out to the old road. There are some spur trails which take you to the RI/CT line, and also later the RI/MA line. You’re about as far as you can go and still be in RI. The woods are well-drained, oak and hickory uplands, with some big stands of white pine.   Most of the undergrowth is lowbush blueberry.  There are big stands of mountain laurel, particularly along the RI/MA line, and in many places the ground is covered in wintergreen. Water sources are gross, and with the trail as short as it is, bring water.

Taking a quick left into the woods on the first trail I found, I wound along on a tiny herd path, unexplored terrain for me. After a while I sensed I was starting to bend back to the road, so I cut through the woods uphill towards where I could see the trees opening up.  I thought this was the wildlife marsh, but I had reached the road.

On the right this site was clear-cut probably 10 years ago.  Now, at the time it was devastation, but now it looks pretty good.  Note the mature oaks on the left, and the little stuff on the right.   Most of the slash was left on the ground, and now it’s barely distinguishable under a carpet of leaves. 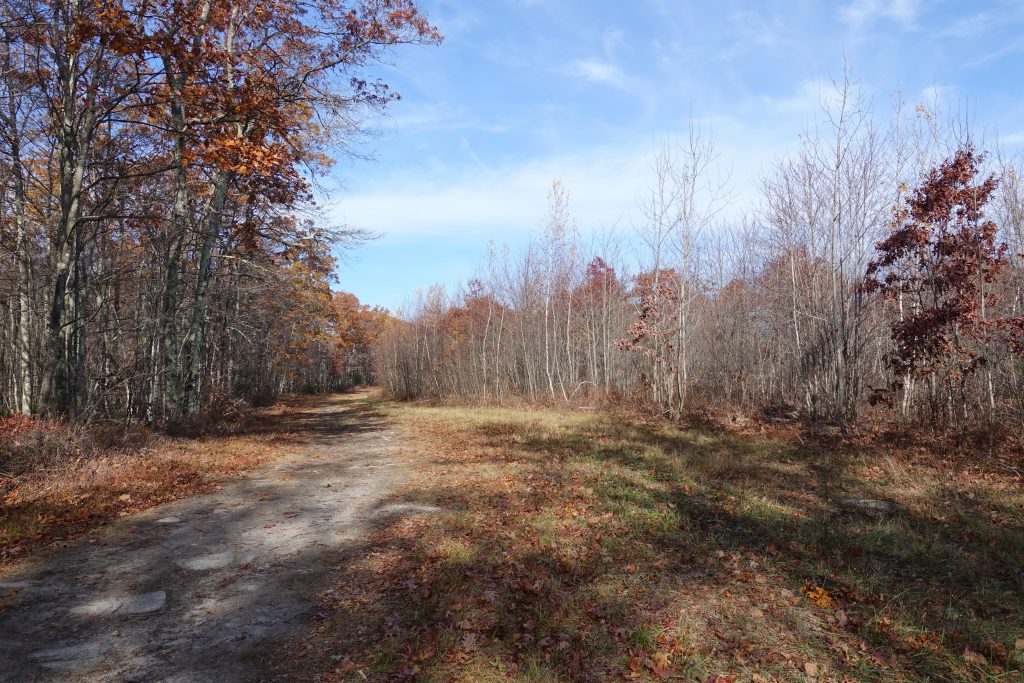 What’s cool about this management area is that it’s well tended, at least for the hunters, and so there are many side trails, little kettle ponds, and fields left open to attract more wildlife. I saw nothing on this trip except 1 bird which might have been a quail, scampering along the trail ahead of me. I think it missed the fact that all it need to was get OFF the trail, and it would be fine. There are these side attractions all around, so I stopped and explored. 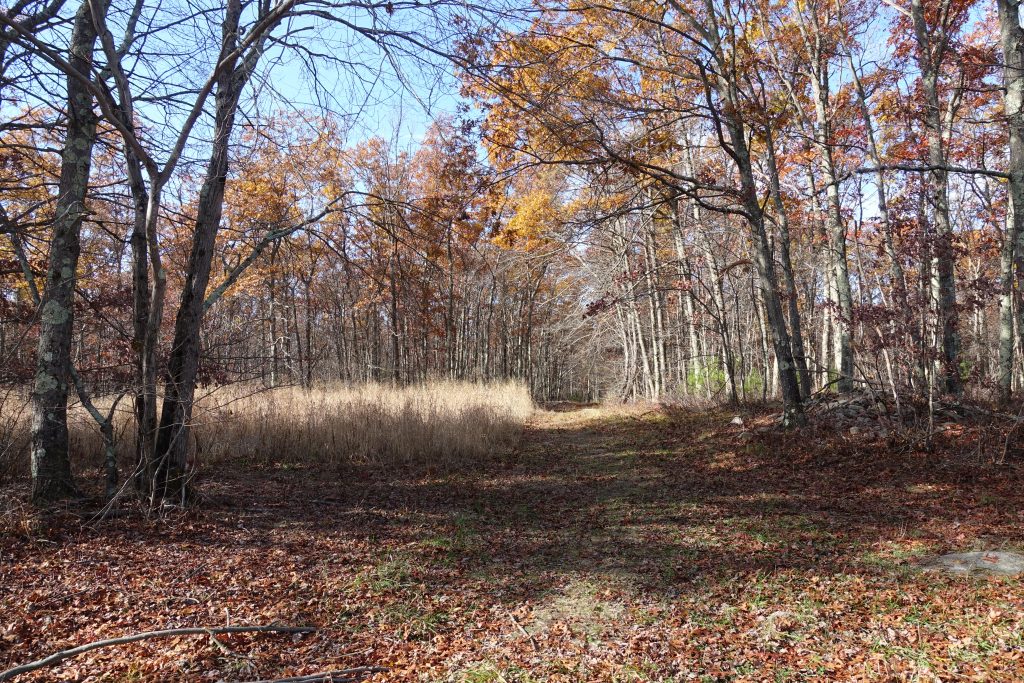 Some ants have made themselves at home here. 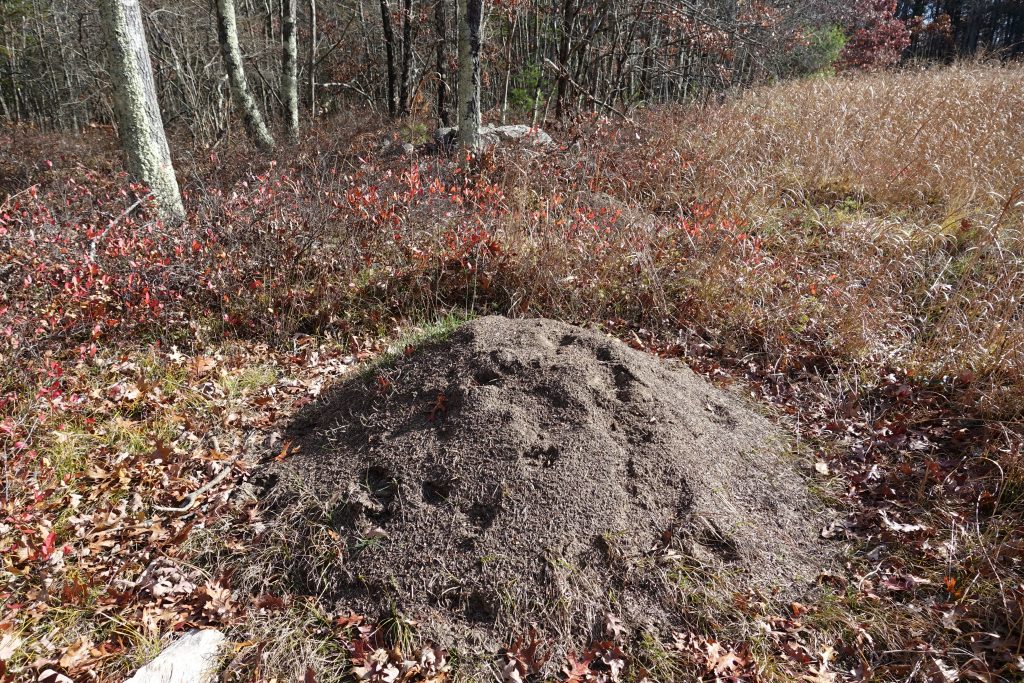 As the day warmed up, bugs started flying about, so I found the last of this years sweet fern and rubbed it all over myself. it’s got a funny, summery smell. For anyone who grew up in RI and played in the woods over summer break, the smell will take you right back. Think of how the woods smell that first hot week in late July – you know what I mean. 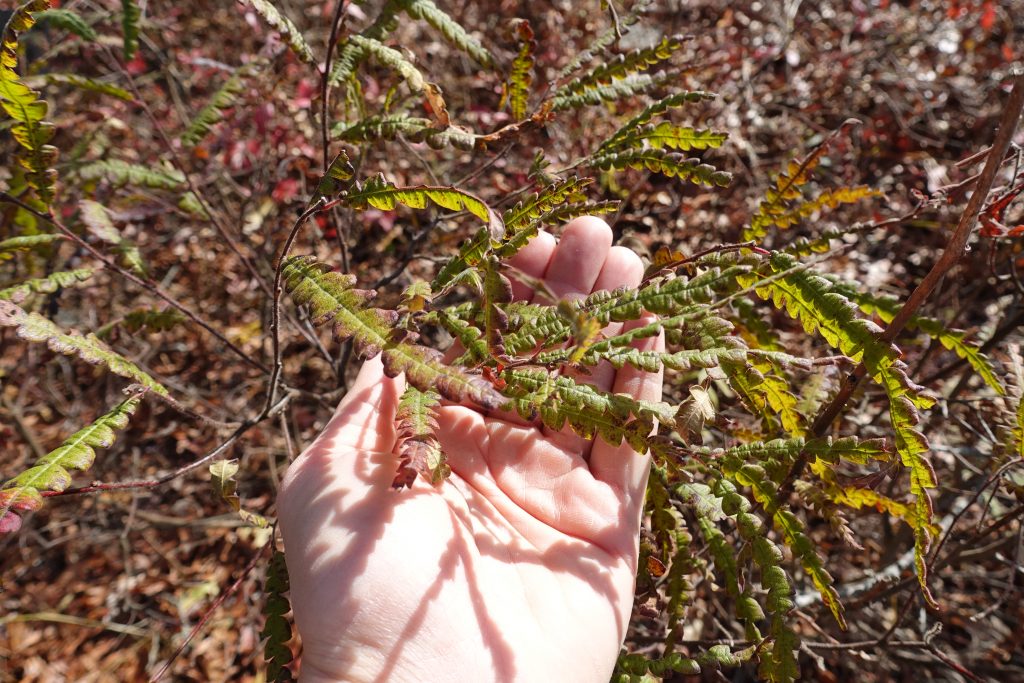 I saw just one of these, but it was a beauty, I think its winterberry. 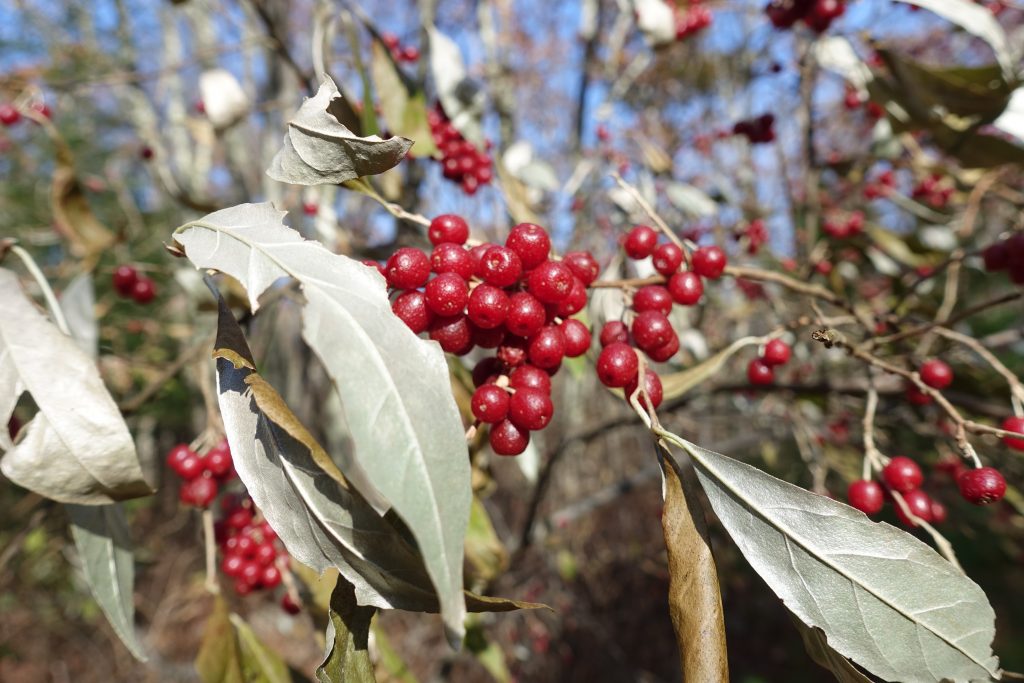 About a third of the way in (going counterclockwise) the woods road converges with another road in from the left – take this left. This will go about half a mile down what is normally a wet and slushy trail, kind of a stream, to the RI/CT border.   Today it was dry and covered in leaves, clearly traffic is low.   It gets steep, so be careful not to slip on the gravel. 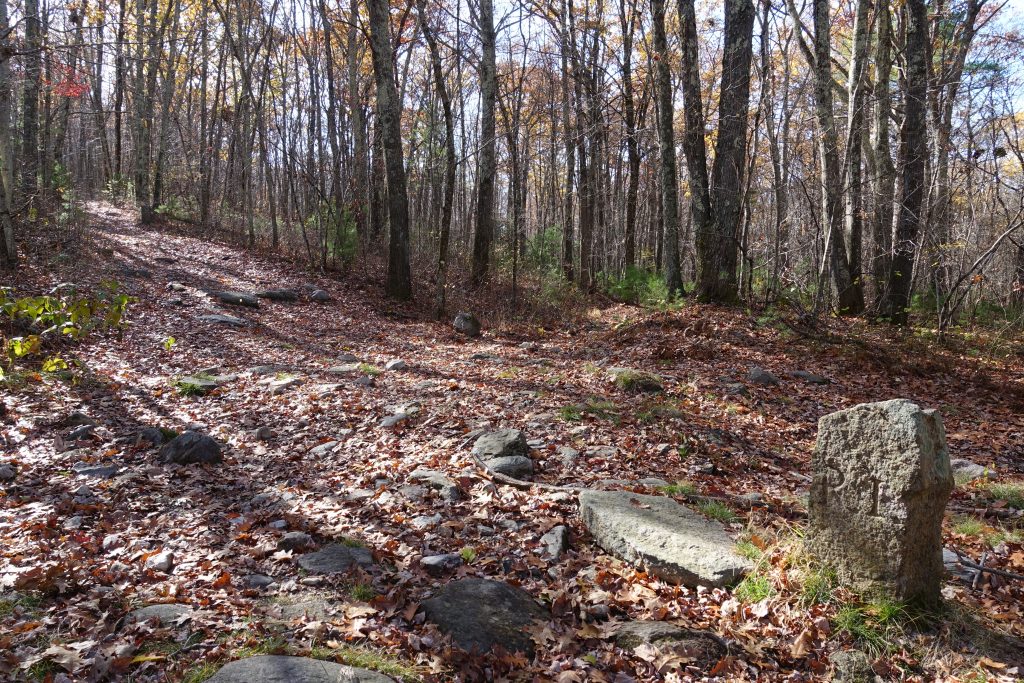 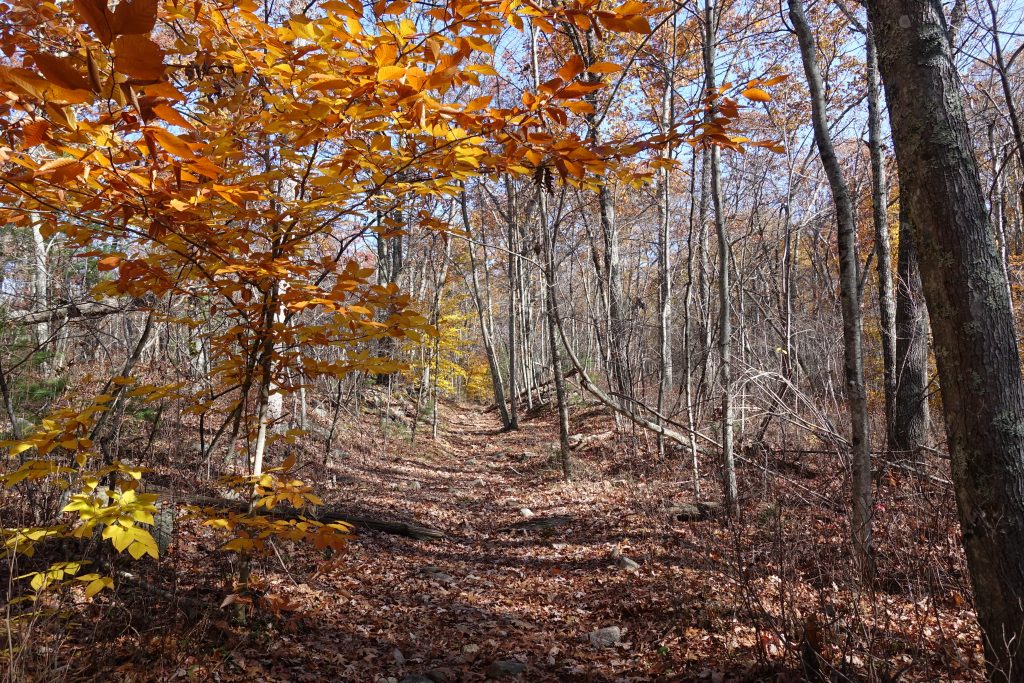 There’s a nice little managed field off to the left that’s a good spot for a break.

Back on the main road, it degenerates into something only fit for ATVs, and about another mile later the road crosses a yellow-blazed trail. If tired, take a right here and head back to the parking lot via the wildlife marsh. If you still have gas in the tank, take a left. After a short walk through some mountain laurel thickets, the yellow-blazed trail reaches the MA border. It continues as the Midstate Trail, a 92 mile journey across the state of MA, linking up with the Wapack Trail in NH. At this junction, a right turn joins the RI North South Trail, of which I’m a big fan.

North South Trail and back 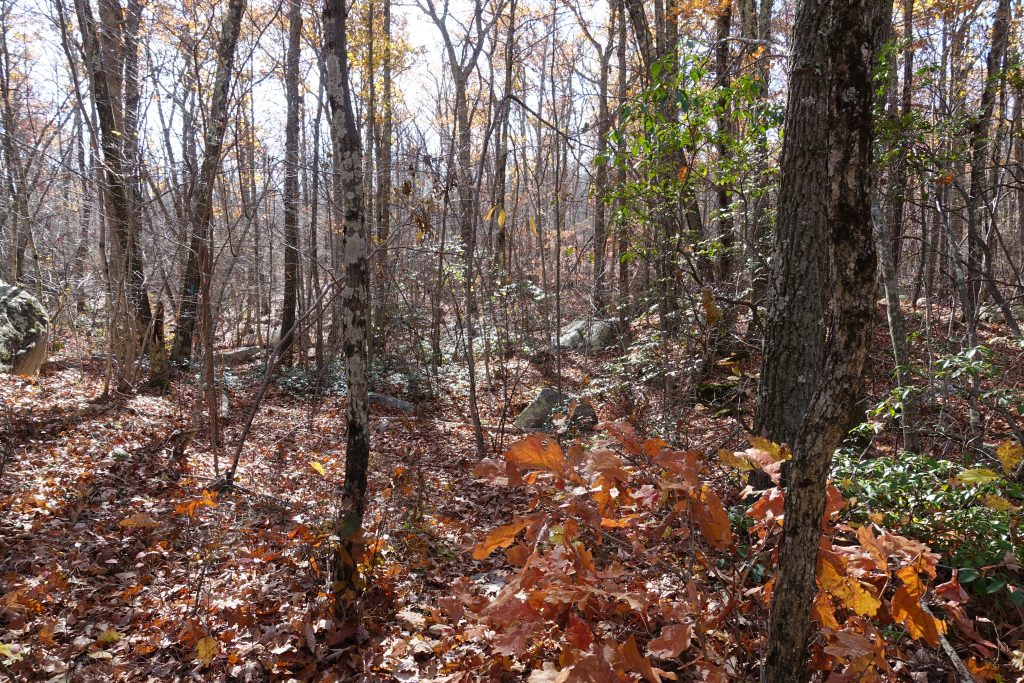 The trail immediately changes character. What was a wide, smooth path on gradual ups and downs becomes much more challenging. The trail winds in and out of rocky areas, and does some steep stuff.  At this time of year it’s covered in leaves, perfect for rolling ankles. After a few of these, I realized I was tired – and there’s plenty of good spots for a break. To the east through the trees can be seen Wallum Lake, but there’s no decent access. 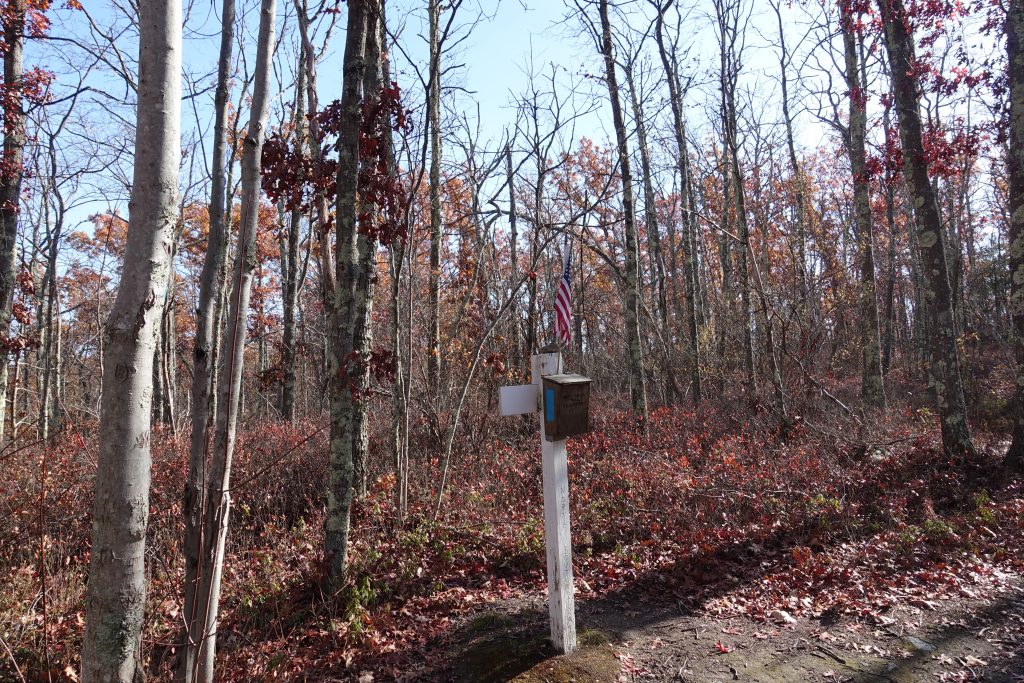 After an apple and half my water, I pushed on, of course stopping to sign in at the register.  The trail crosses a really rough ATV road, take a right uphill. This road winds up and down, back and forth, and past a few swampy areas.  Eventually it merges into the main road that leads to the parking lot. Heading south (left) on this road, the wildlife marsh is on the right.   It’s low, about 3 meters low, but still a nice grassy place for a break.

Less than a half mile and you’re back to the car.

All in all, about 4 hours, including the side trips and breaks. A perfect day.  The shotguns stopped soon after I got there, and I only ran into 4 people the whole time.