(Originally published at The Trek)

Despite it being the same trail, the first 110 miles ended up being totally different. Part of that was by design because I specifically took different routes doing some off trail blue blazing and intentionally camping in different places.

Day Zero was of course wonderful and frantic at the same time, with everyone gathering at Scout and Frodo’s for their wisdom, food and camaraderie. At 5 in the morning on the next day it actually started to get real. By 7:30 we were at the Terminus, photos had been taken, hugs exchanged, and people started straggling off northward.

The first change I made this year was to do the road walk through Campo Village. I stopped at the famous Green Store, exchanged a few words with the owners, and bought a pack of crackers. Making my way back to the trail I got on and managed to catch up with some people for the photo at mile 3. Around mile 8 I fell in with my first group of hikers, 2 women named Una and Eva, and they decided to join me down a side trail at mile 9. The side trip worked out perfectly, as we were able to spend lunch under a gigantic shady oak tree. 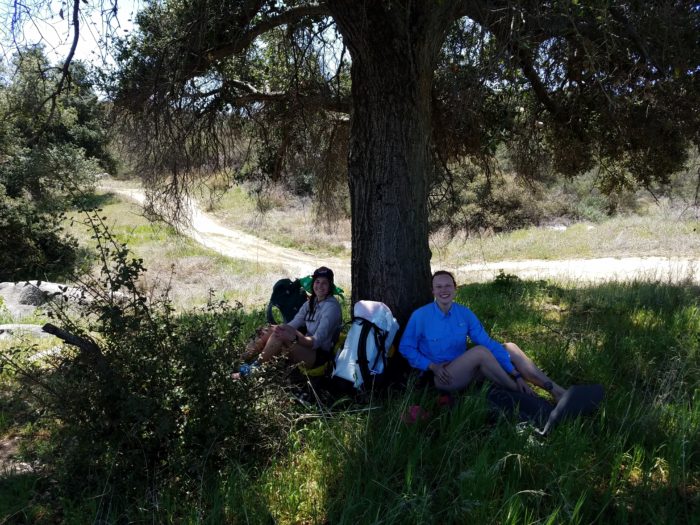 With Houser Creek dry, I pushed onto Lake Morena doing the ceremonial 20 mile first day. I cowboy camped and woke up with frost on my quilt.

It was great to see all the flowers out. Last year there were some, but not like this. The little scrub oaks also still have acorns, and the acorns which have fallen end up in woodpecker holes in the sides of trees. 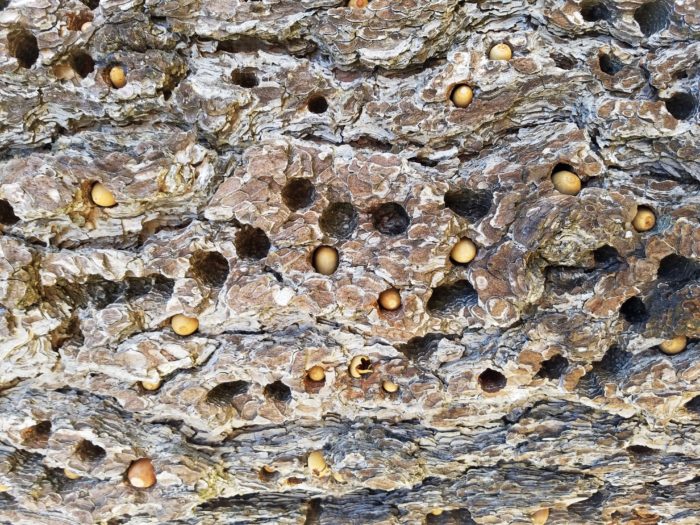 Day 3 found a group of us campung at Mount Laguna, in the face of on oncoming storm, promising and delivering 50 mph winds and sub freezing temps. After another bathroom dinner special, we all hunkered down.

My fastpitch method on the tent held up, so I’m psyched to have brought only the fly and poles.

Another 2018 oddity, most of the people I’ve camped and hiked with are women. Very high ratio this year, which is great to see.

Past mile 64 I walked the canyon road instead of the PCT. I found a spring, checked out some old abandoned mines, and saw my first hummingbirds. I would recommend that route over the PCT to anyone. Plus it was easier walking. Saw a rosy boa, coming to join me in my shade break.

Falling in with Iron Steff and Amanda, I got to Julian where this year I met the legendary Carmen, who crowned me with the title “Magnificent Beast”. I also got my slice of free pie; I highly recommend Mom’s pie shop to anyone.

Three beers later, I pushed onward out of Julian and made it to about mile 82 before the sun set and the wind picked up. I went down the back side of the ridge and found a clump of junipers to hide from another wind storm. Saw my first kangaroo mouse in the dark.

Crossing mile 100 was gratifying, although bittersweet with nobody to share it with. I tweaked two of the signs so that they use the more European style of the number one, a gift to my Canadian and European friends close behind.

Another different thing I’m trying – this year I am staying at Warner Springs and taking half a day off. I managed to get myself and my clothes at least 2/3 clean. 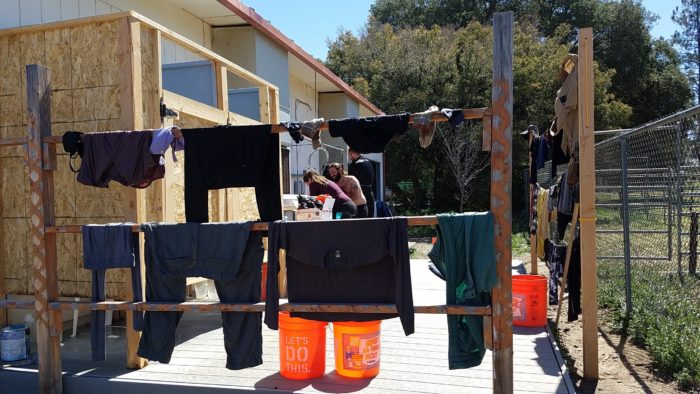 Hiding from the Sun, even in a non-air-conditioned building, is just awesome. There are probably 30 or 40 hikers here. Met a guy named Acid Jesus.

Tomorrow will be something like 17 miles, all uphill with a full pack. Hint: I am not super excited.