New Englanders love to complain about winter, but we’re sad to see it go. The last sunny and cold weekend I made it out to the Spencer Property, owned and managed by the Foster Land Trust. Our weather tends to be feast or famine; 10 degrees one day, 50 degrees and raining the next. Blame the Gulf Stream and climate change collapsing the polar vortex.  I spent about 3 hours there, just basking in the hot late winter sub and enjoying the peace and quiet.   I had the whole place to myself.

It’s off Old Danielson Pike, not far past the Foster/Scituate line.   It’s near where the Foster Bear Arms store used to be.   There’s parking for about 6 cars.

I got there around 11am, and the parking lot was empty.  I strapped on my snowshoes and started walking. On well-travelled trails they can be a bit of a problem since the previous hikers have stomped holes in the snow and things are all frozen. But I was soon rewarded as I got to the pond. Most people stopped here, either for the view or to play hockey on the ice.   In the distance, below, you can barely make out a big square section someone had shovelled. 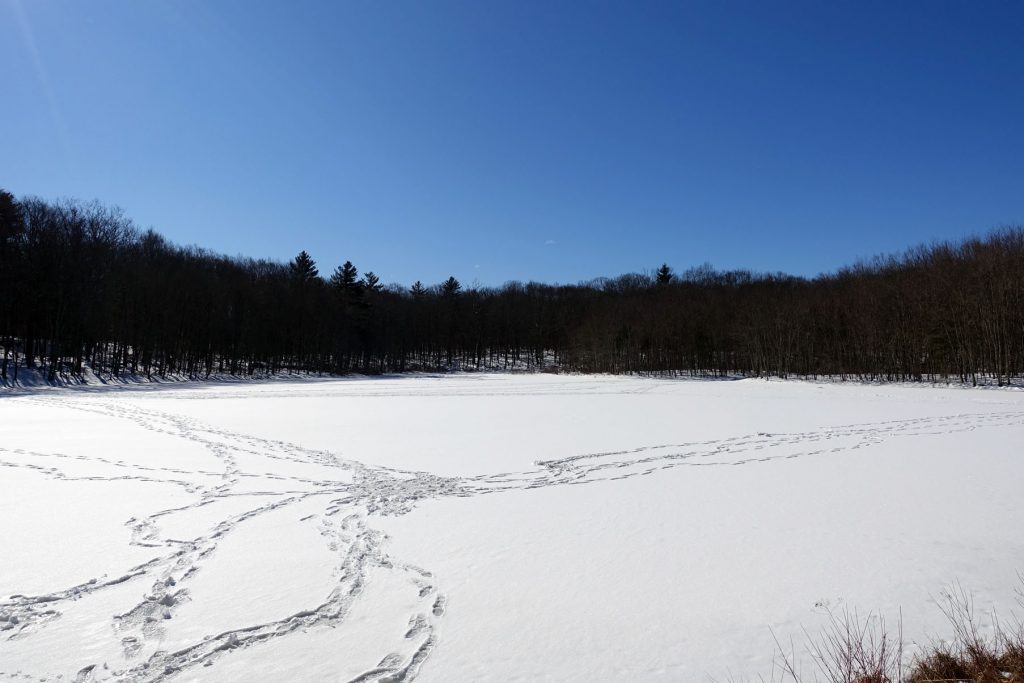 It was cool, maybe 25 degrees, but bluebird skies and little wind made it completely enjoyable.   I noticed sitting on the snow by the lake the utter lack of noise – no cars, no planes, no dogs, no birds, no people.  For all I could tell, I was the last person on the planet.   Had the space ship arrived and nobody told me?   If so, was that a bad thing? 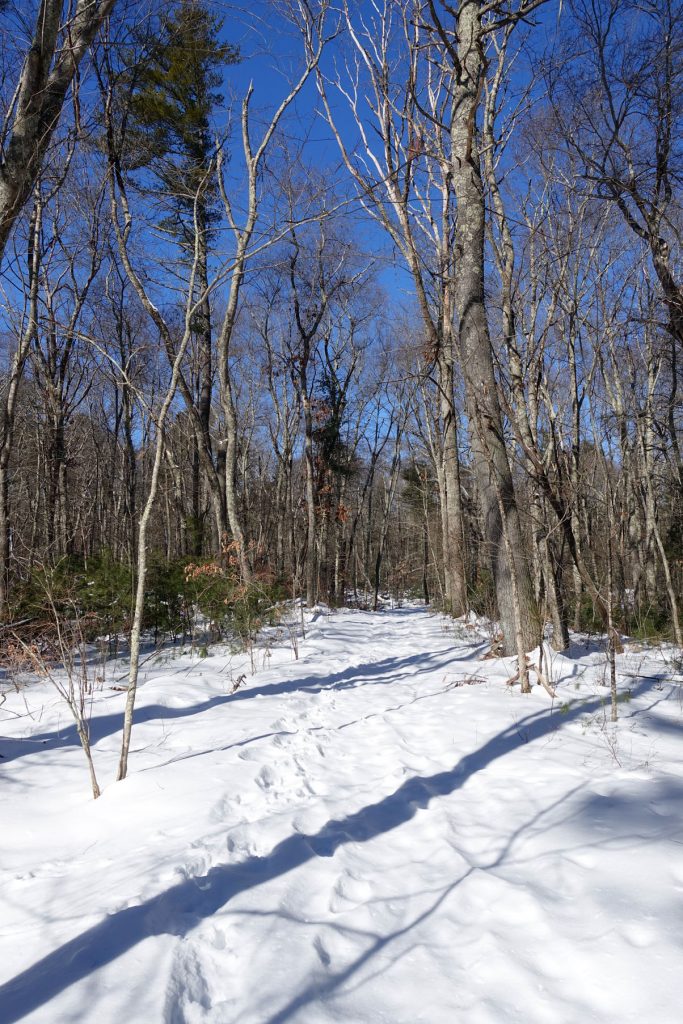 Past the pond the trail smoothed out and it was easy going on the snow.  A thing about snowshoes – you dont not walk, Jesus-like, across the surface of the snow.  You sink in a little.   But on sun-consolidated snow, I only sank in about 2-3 inches.   I did a test, without the shoe it was about 6 inches.

The trail is well marked but not overly so.  Soon there was the turn off for the “Gravel Pit Trail”, which is a bit rougher and was less travelled.   I was tempted to stop for water, but I had plenty.   Always keep your water filter in your pocket when it’s cold out! 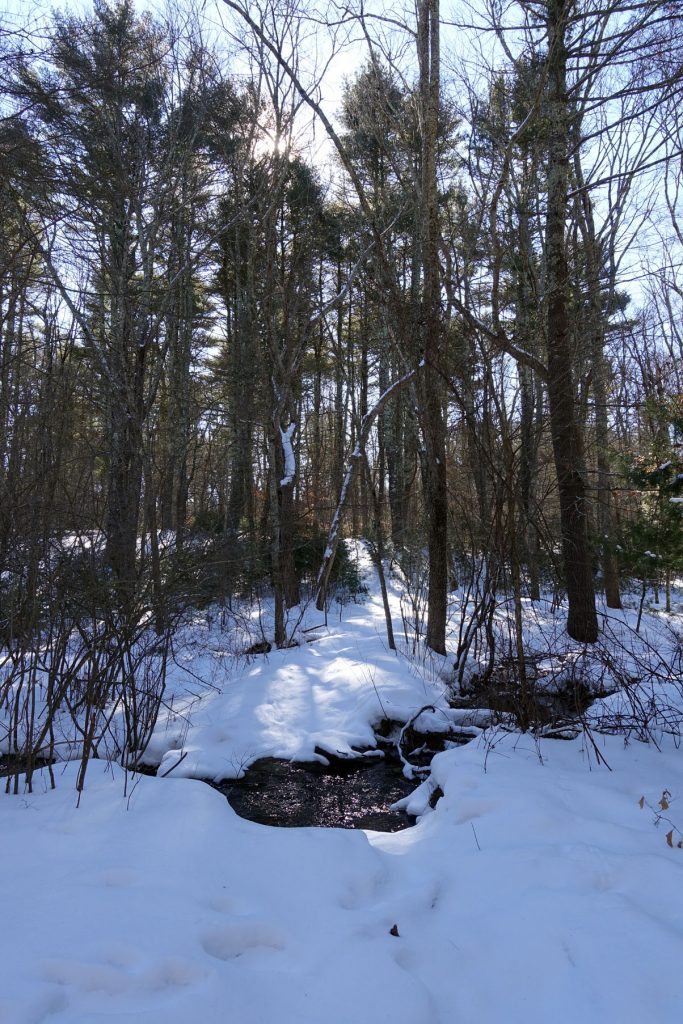 At times the trail almost disappeared, but I pressed on.   The nice thing about being the only guy wearing snowshoes is that you can just turn around and follow your big feet back home. 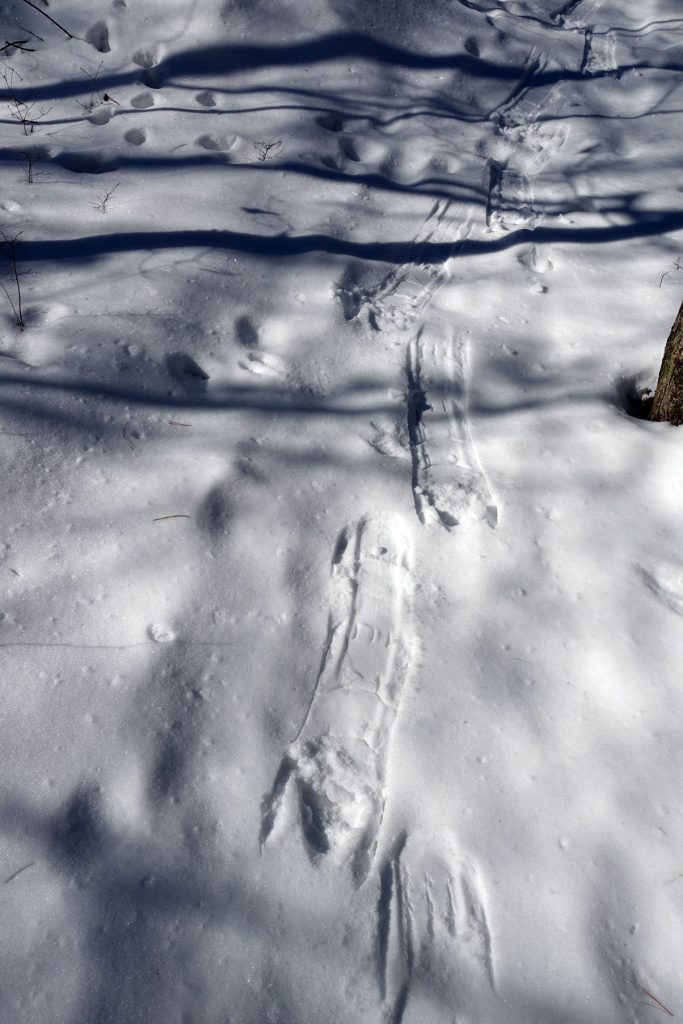 Rejoining the main trail I continued until it broke off to the right and reached the Ponagansett River.   Here I stopped for lunch and a break.  I thought I might see some trout, but they were probably hiding.   There’s a lot of brush and blowdown along the river.   Seeing the property across the way reminded me of a quote from JRR Tolkien’s Silmarillion, when the first Men reached the lands in the West and found the Elves there.   The elves quickly went to their King and said “if you have power over these newcomers, bid them return by the ways that they came, or else to go forward.  For we desire no strangers in this land to break the peace in which we live. And these folk are hewers of trees and hunters of beasts; therefore we are their unfriends, and if they will not depart we shall afflict them in all ways that we can.”   I mean I get that a lot of trees got wiped out in a microburst a few years ago, but did you have to clearcut the whole piece? 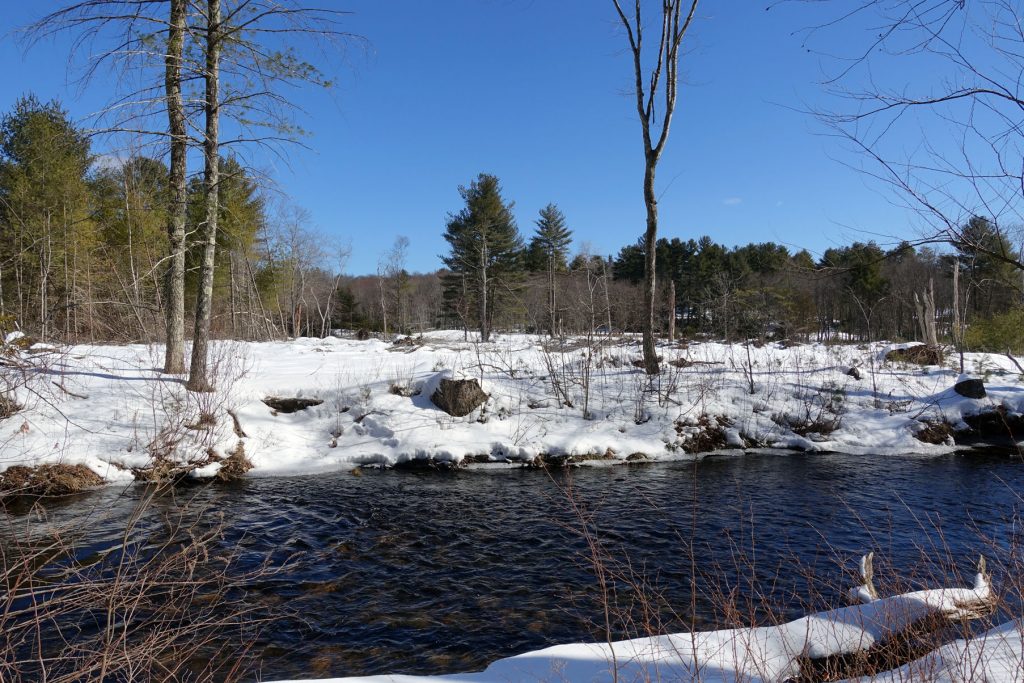 Backtracking to the main trail, I again took the right fork, and headed along the red trail until it reached the edge of the Foster Land Trust property and moved onto State land. 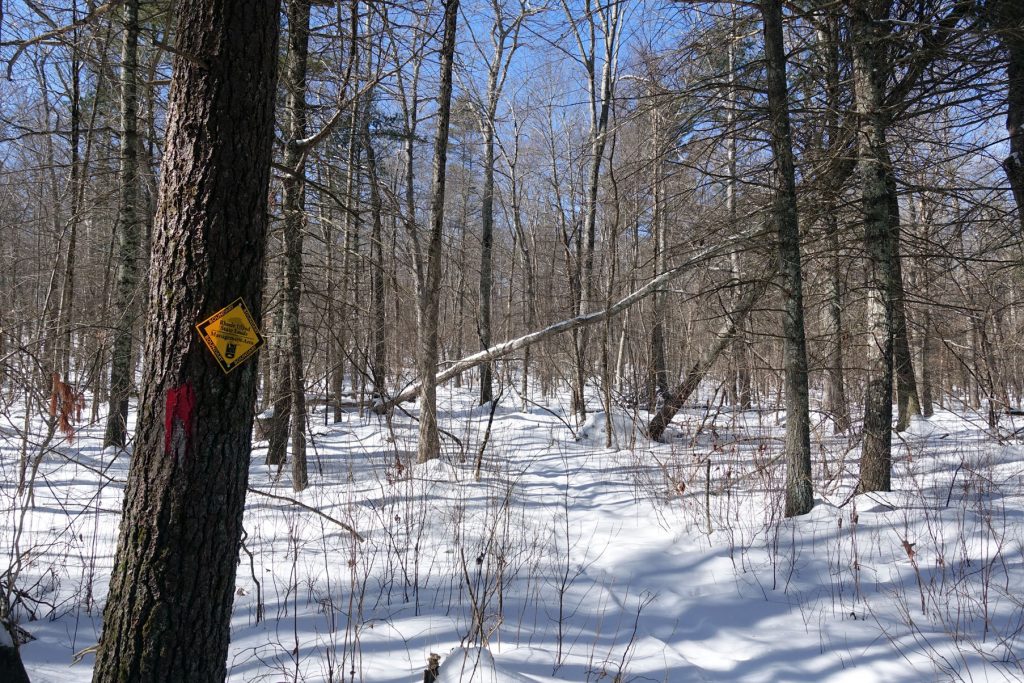 Definitely a feline, perhaps an inch and a half across. 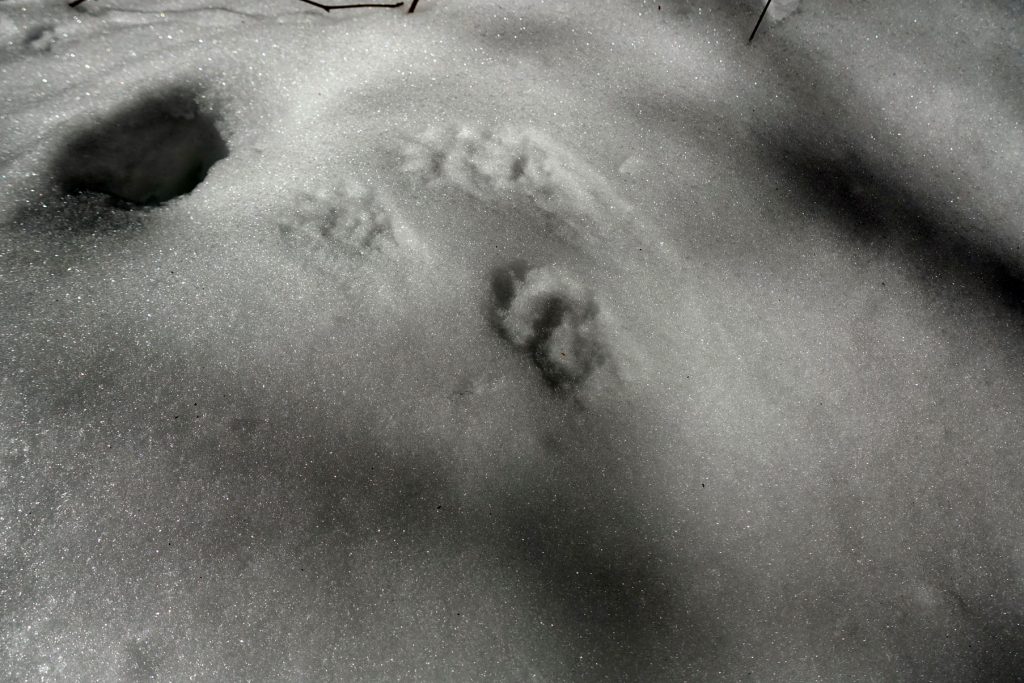 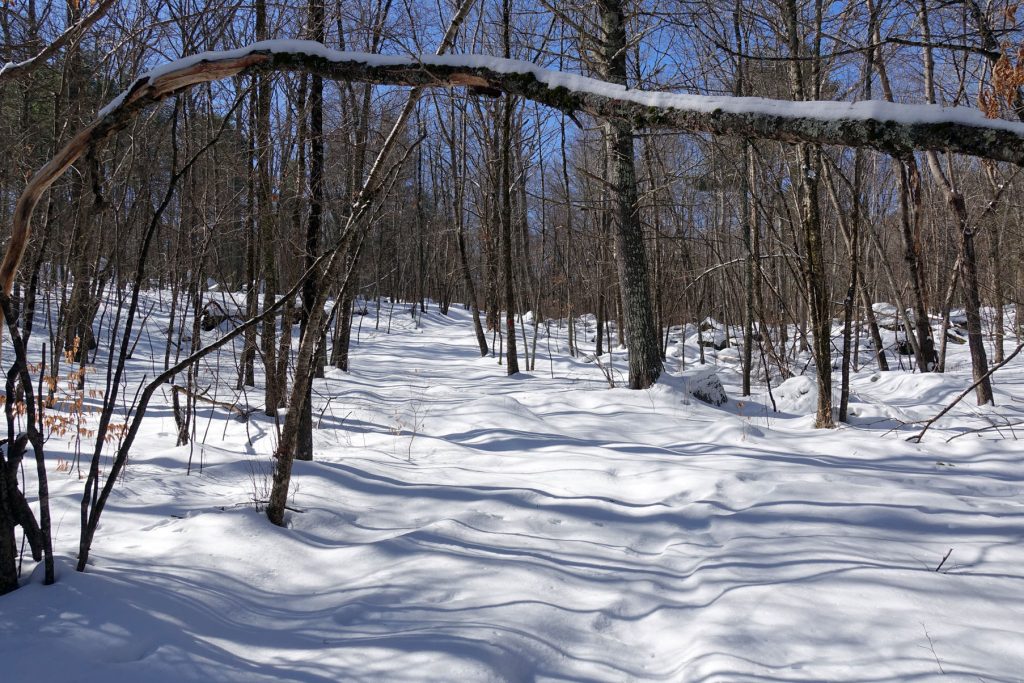 There was almost a hill leading up off the Land Trust land, and the trail became a frozen streambed.   I could hear huge hollow sections of ice collapsing under me, but the snowshoes kept the weight pretty well distributed and I never sunk in. 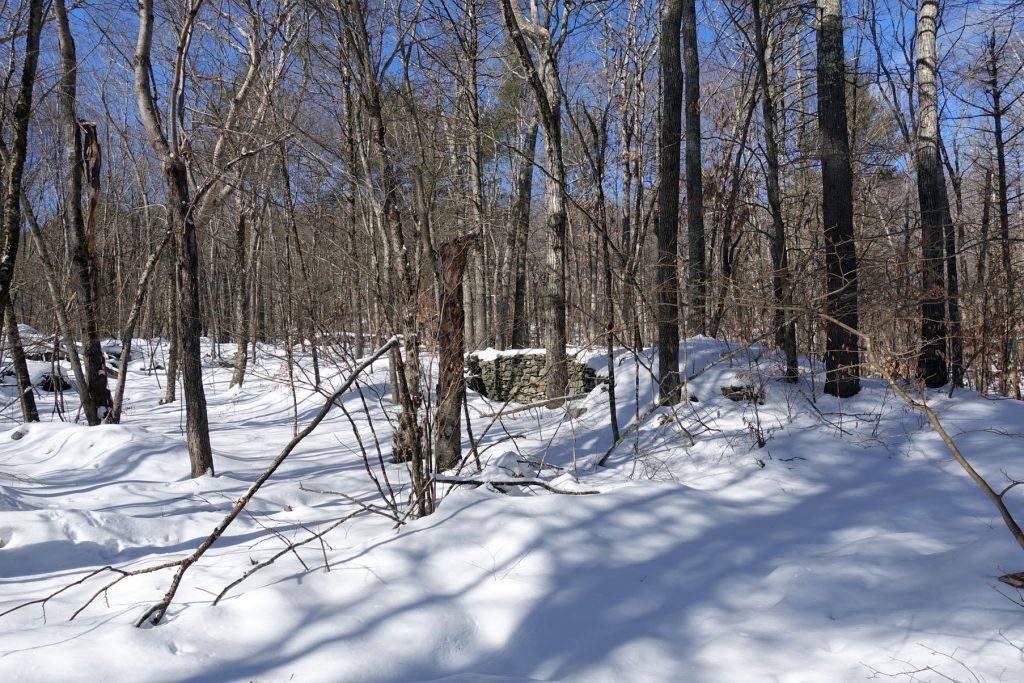 Someone used to live here. 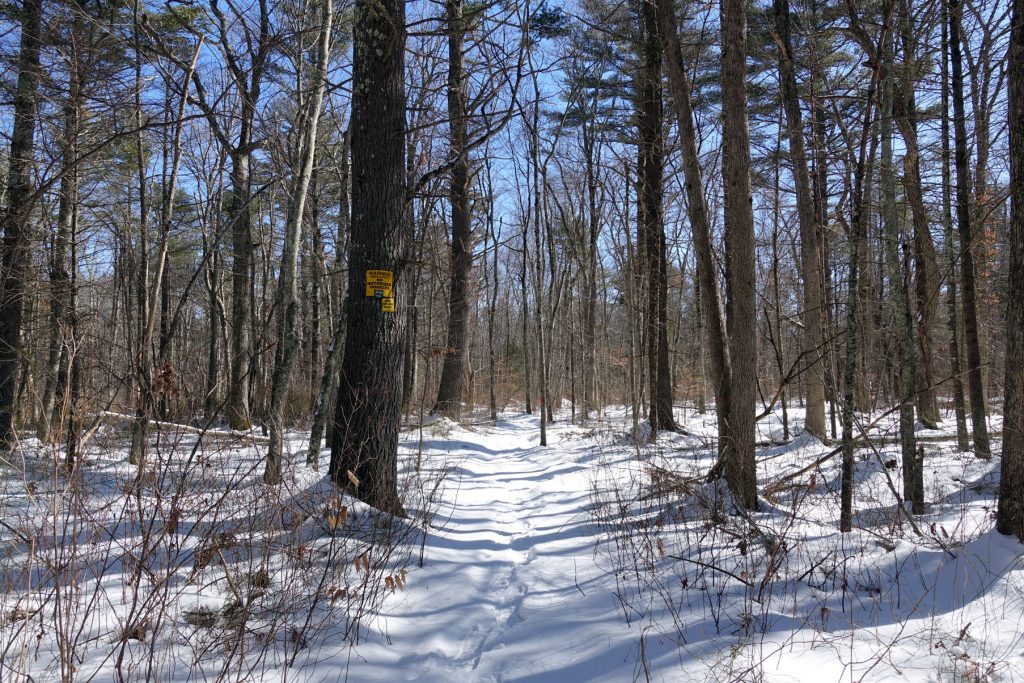 Retracing my steps,  I found that the slight slope of the parking entrance had JUST enough ice on it to keep the truck from getting any traction.   Well, that and no weight in the back, on bad tires.  I burned some rubber trying to get out,  and then I ended up calling for a ride.   As predicted, 2 days later it was 48 degrees and raining. All the packed snow and ice in the parking area was gone, and the truck drove right out.

The trail is a big loop, with some cool rock scrambling and a “Troll Cave”, which is probably best explored in clearer weather.  Since it’s a loop, I think next time I’ll do some off-trail exploring.