What a difference a few days can make. Well that and surgically removing a foreign object from the bottom of my foot.

I got up early from the state park and got in almost immediate hitch up to the Devil Slide trail, which I banged out before the sun came up.  A long hard slog going through several thousand feet of elevation, a personal best, I reached the top of San Jacinto at 10834 feet. I think I had a little altitude sickness starting at around 9500, I got light headed and very tired but I managed to keep going.  I spent about half an hour on the top until I started feeling strange again. 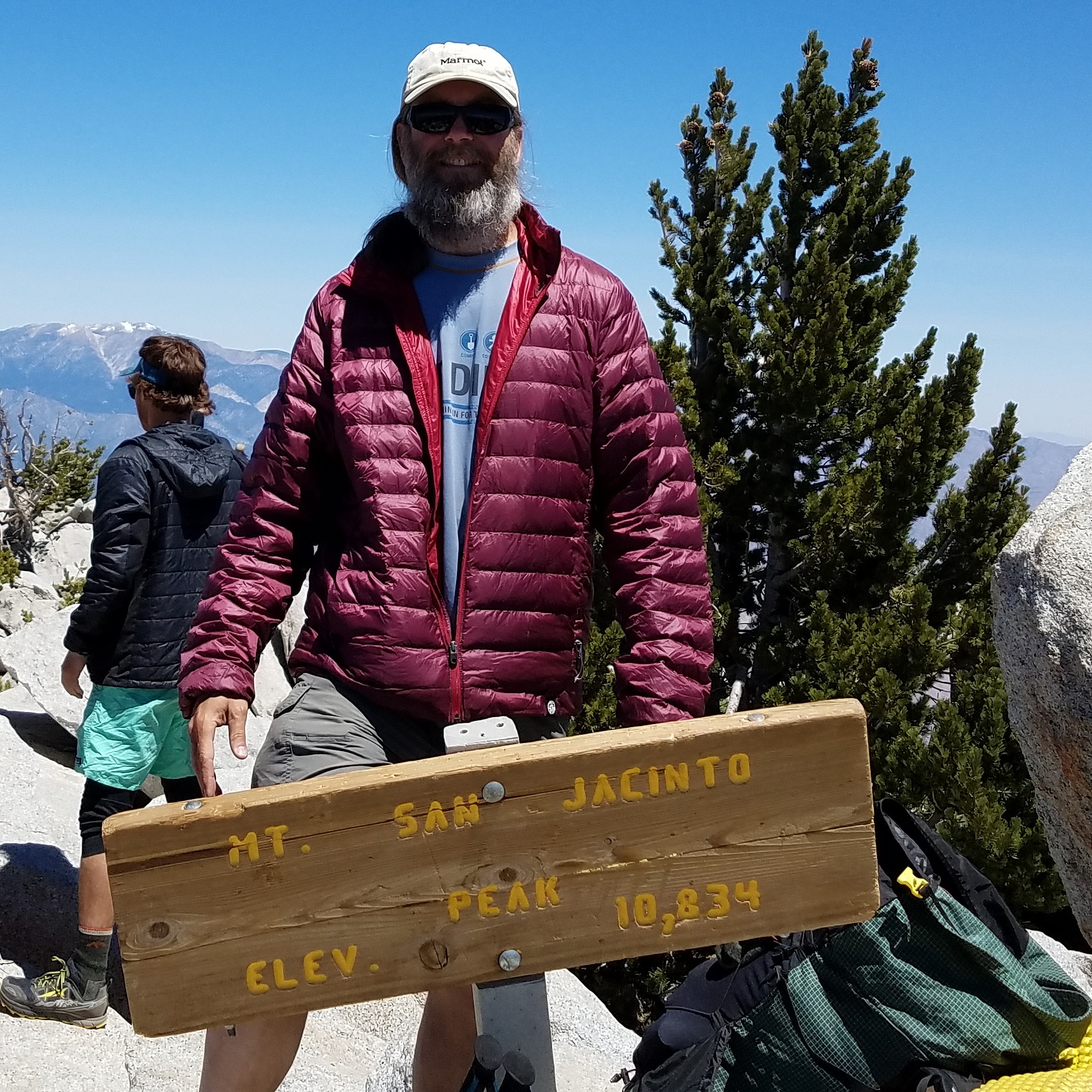 Came down and got to about mile 194.  I caught up with Hope and Spencer.  What an amazing view from the top, you really could see forever.  Weird clouds coming in, too.

Got a message from the Fab Four, asking me how my feet were doing, that was nice to hear, even as they rocket ahead and leave me in the dust.

The next day seemed like it would be easy because it was all downhill, except it was 12 miles of constant downhill, constant switch backs, in full sun.  The cool thing was that I saw a rattlesnake finally, and manage to get at least a picture of him slaughtering away he was very angry coil rattling etc.  Passed the 200 mark which was pretty cool except no one there to take my picture. 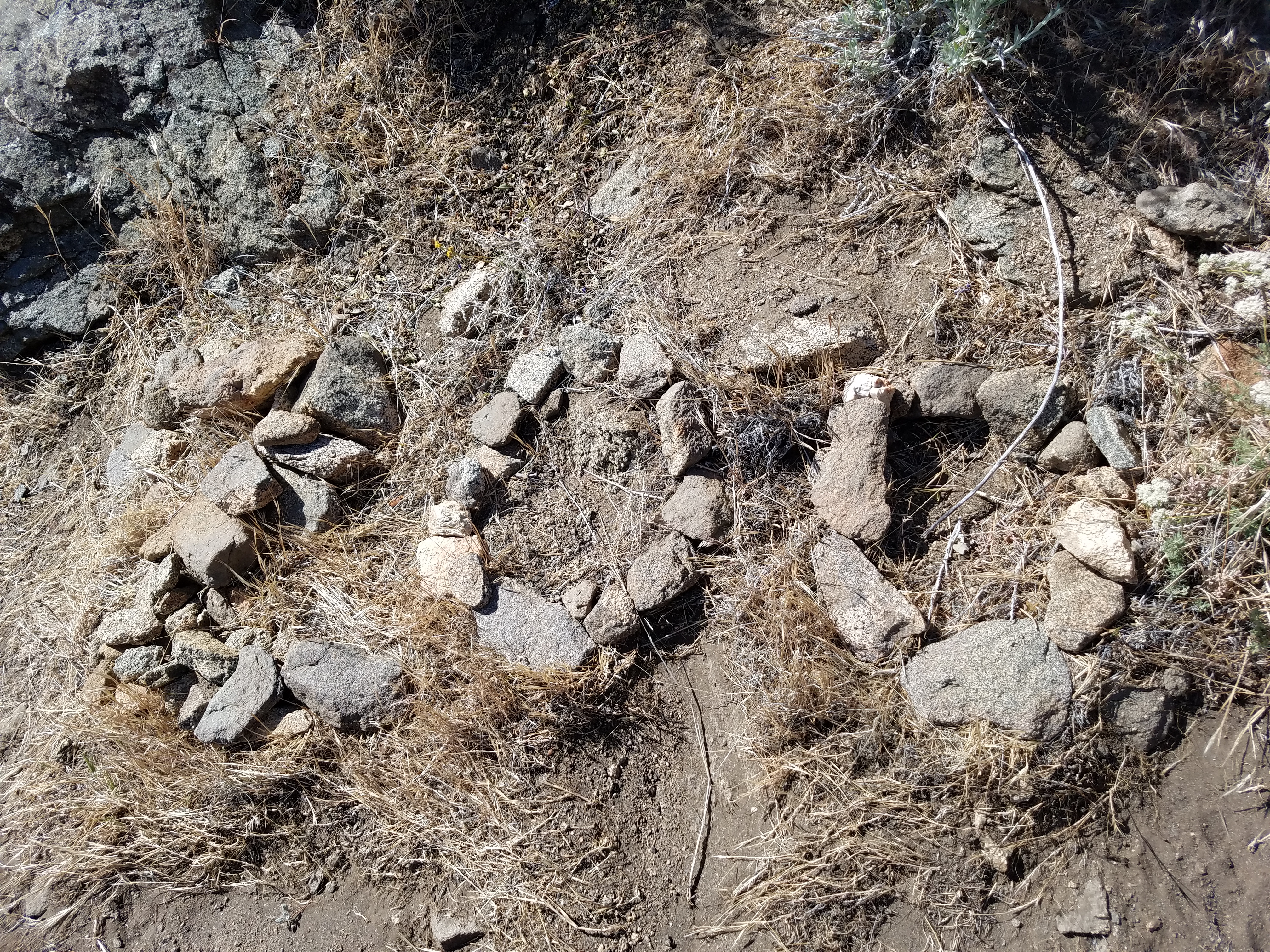 Note to Tracy, at the bottom of the endless downhill there was actually a bubbler where I could refill my water bottles, despite the fact that it was covered in bees. Unfortunately I got to the bottom at around noon, and the valley floor was probably at 95 degrees at this point.  I suited up and got the umbrella out anyway and did the three and a half miles to the road where I knew I could hide under the overpass.  It was brutally hot, my clothes were covered in salt and I think by the time I got there I was starting to get truly dehydrated.  I ended up drinking 3 liters of Gatorade mixed with salt and slept under the I-10 bridge for an hour before I even felt remotely human again. There’s a nice water, snack and beer cache maintained under the bridge and there was even a trail angel who was ferrying people back and forth to Cabazon.

By about 5 o’clock it was cool enough to continue so I suited back up and hiked the 3 or so miles up to past the wind farm, with its water cache.  It was here I realized a man needs little to be rich.

Had a very rough day even in my tent I felt sick to my stomach and had all sorts of cramps.  Need to not do that again.

The next was better, smoother hiking, and after a nearly dry river, another dreary 20 up Mission Creek, although with a sweet 4 hour siesta, to the head of the drainage and start of a big burn area.

The reward for all that took was the next amazing day of ridgewalking, under haze and breeze.  I flew all day.

Also, Gatorade and snacks.  Got to the famous animal cages.  So sad, thanks Hollywood. 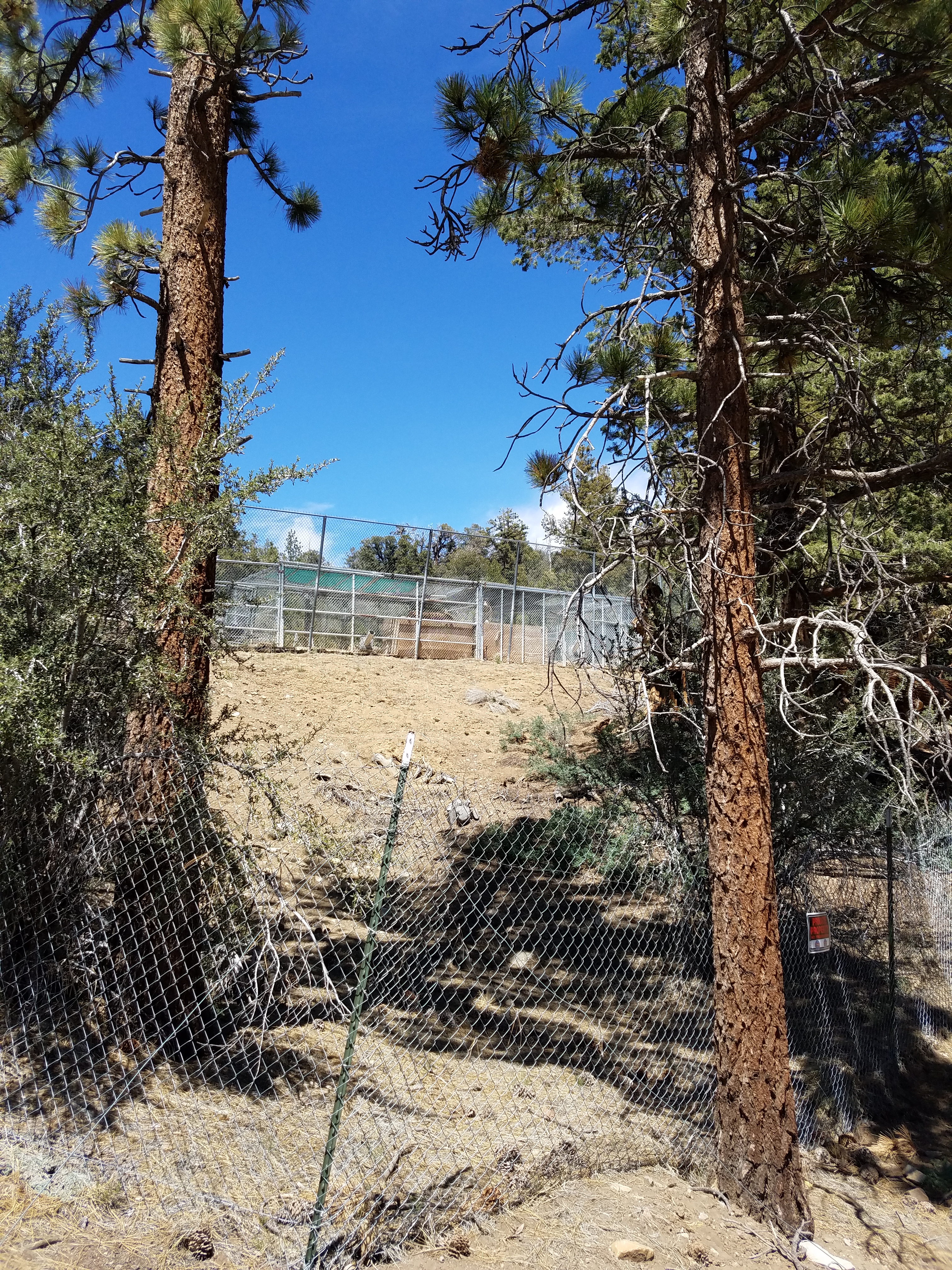 Zoom/squint, you’ll see the two tigers.  And here’s the bear, not on loop, he just paces like that constantly.

I stopped for some food at Arraste Camp, but pushed on after recharging.  Note the luxury – an actual bench, and both freeze dried potatoes and corn (eaten cold of course).

One final gem on the awesome day, a mini hiker register with words of encouragement.  People are super supportive of each other out here. 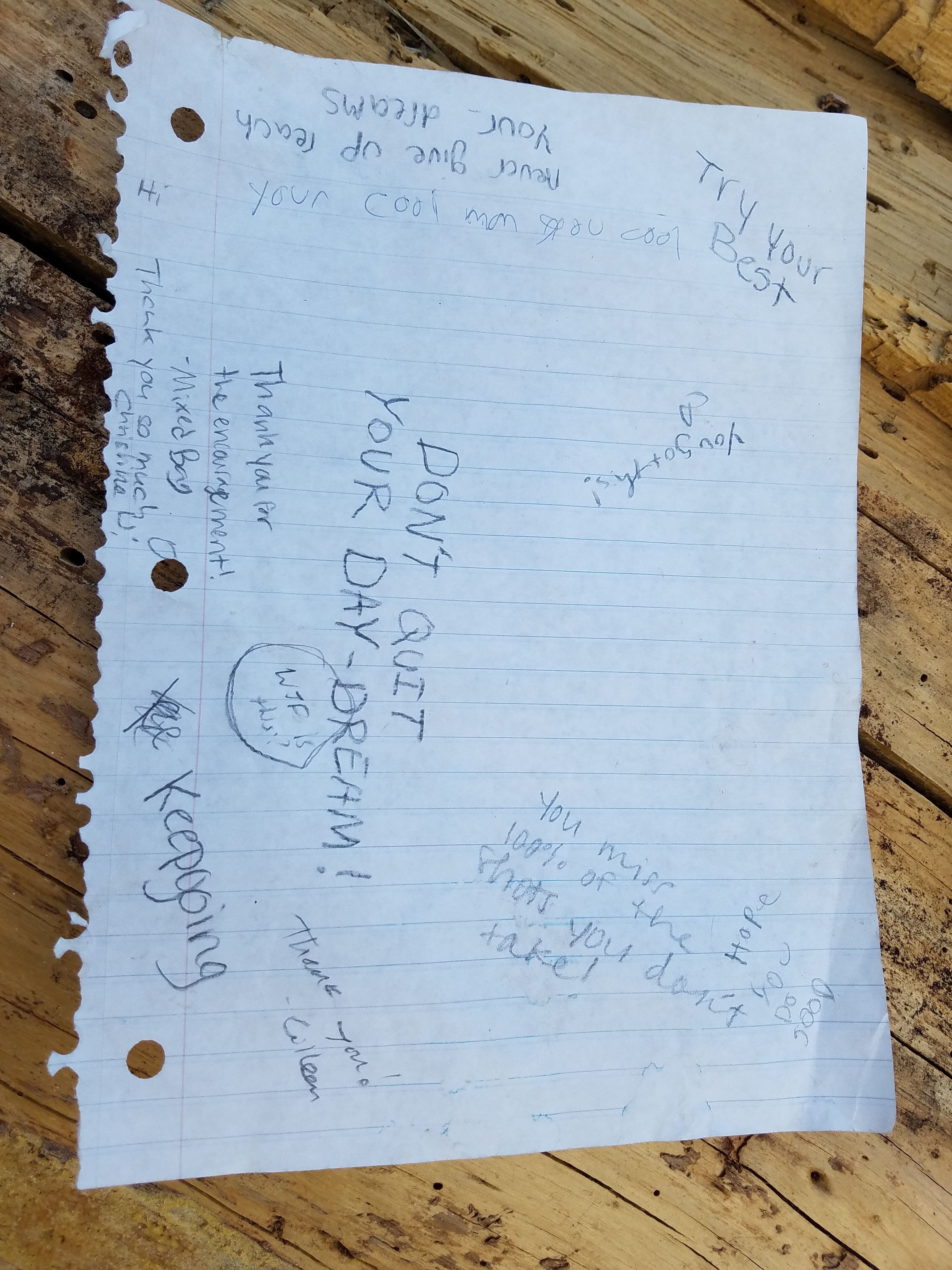 Could have been a bad turn.

So here I sit, sucking power from a laundromat and crying into my chocolate  chip cookies, because I just got an awesome anniversary present.  Also got some mundane things, like a new rent and new shoes.  Excited about both.  Dry or “base” pack weight now 19 lbs.

Everyone is in town, I caught them all somehow. I think people put the brakes on when they learned about the 300 hikers stacked up at Kennedy Meadows, and the already 1 fatality at a river ford.  This crew is great, Jade, Q, Lunchbox, Trailblazer, Unstoppable Zod – all my Idyllwild pals.  They’ll dust me tomorrow, I’m sure.  But it will be a merry meeting.

Note I write this on my phone and I’m not sure the formatting comes out.  Please tell me if this isn’t readable.