I spent 3 days in Vermont, bagging the 4 remaining 4000 footers (I did Pico/Killington years ago).

I first made my way up to the Lincoln Gap trailhead, where even the torquey TDI I drive had trouble on the 24% grade and the tight turns; I had to drop to 2nd gear to make it.   The Lincoln Gap road is the steepest paved road in America.   Of course some guys make a sport out of it – http://mountainpeakfitness.com/blog/2009-vt-6-gaps-ride ! 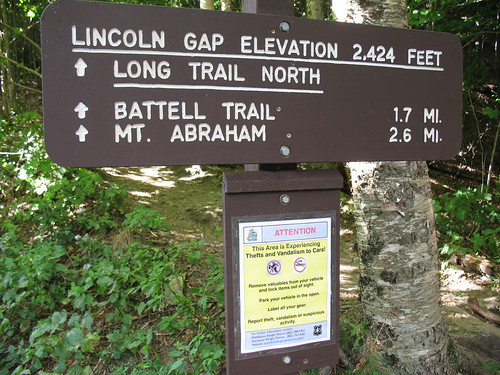 The trail is no cakewalk either.  1.8 miles to the shelter at around 2900 feet, with most of the gain coming in the middle third.   Still, a nice walk through hardwoods most of the way, I saw a cool bright green caterpillar (I think Orthosia hibisci), and a lot of mountain aster. 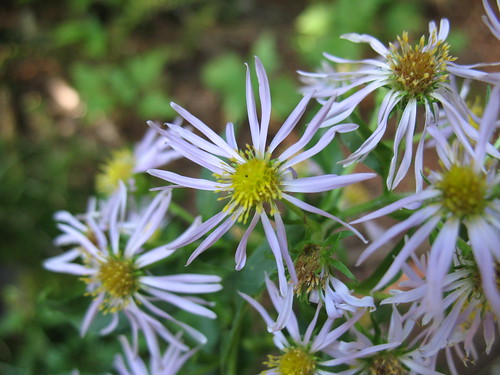 I stayed at the shelter, the Caretaker was off, probably recovering from a busy Labor Day weekend.  Two section hikers rolled in around 5:30, but pushed on, to bootleg camp on one of the ski slopes.  Up around dawn, I jumped on the trail and hit the summit a few minutes after sunrise.  In an area as hilly as the Green Mountains, sunrise comes to different places at much different times. 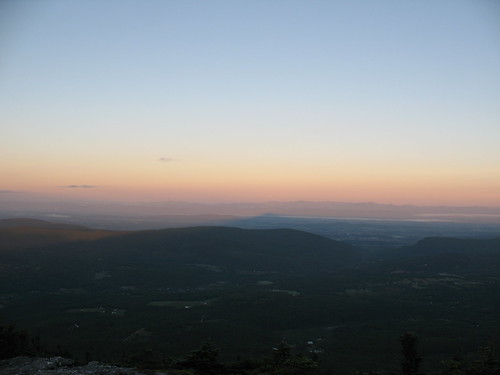 After this, I started the ridgewalk through some ski areas and a couple of tiny cols to make it over to Ellen. 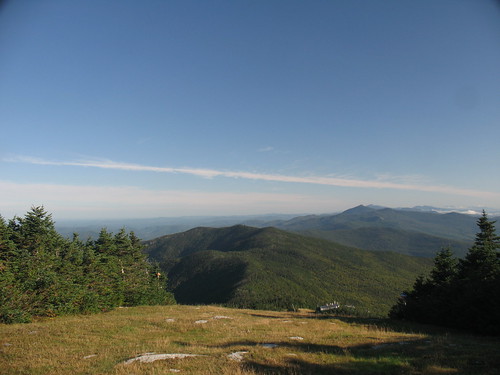 The trails in VT are great – not so steep like Maine, but not so blown-out as the ones in NH or NY.  I think it’s a combination of less traffic (since the mtns aren’t so sexy and high), and good trail maintainers.  Very enjoyable to walk on, some places even have leaf-litter covering the trails.  Contrast that to the High Peaks region where there are beach-ball sized boulders in the trail (Looking your way, Van Hoevenburg!).
Packed back along the ridge and down to the car, the nice thing about hiking early is that the sun is low enough that when you retrace your steps, the trail has a totally different aspect.
Wound my way down the cowpaths to Bristol for lunch, then drove up to the Huntington side of Camel’s Hump.  After all, I’d done 12 miles with full pack, I might as well knock off a few more!   After collecting my thoughts I opted to do it with a daypack and come back down – the camping on Camel’s Hump is WAY off ridge in either direction (E or S), and I just couldn’t make myself lose all that hard-earned elevation.
Camel’s Hump was hard, I guess because I started off already tired, but it was just damn steep (2400 feet in 2.4 miles).  Still, terrific trail conditions made it a lot better.   On the summit I was besieged by flying ants – apparently they ride the thermals up the hill to mate on the summit.   The summit steward(ess?) was awesome. 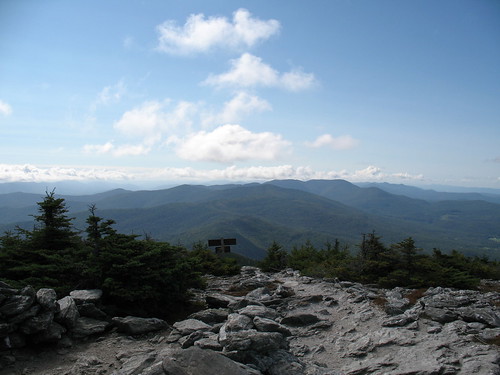 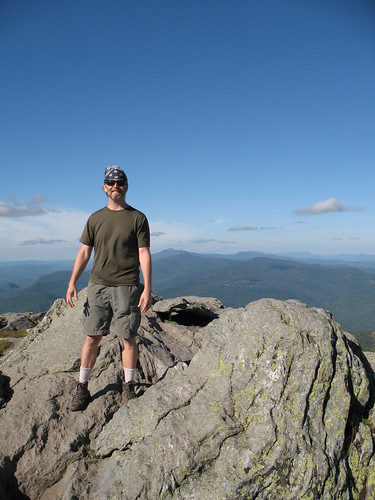 Once I got back down, I shared a beer and war stories with a fellow ADK46er, then drove north to Underhill State Park, where I camped for $20.  Great place, super friendly Ranger, very knowledgeable about the trails.  They mandate leashed dogs and were SO into Leave No Trace that they told people to pack out their own poop.  Not from the park of course (they had portapotties) but from the trail.
Great trail map from the State of Vermont:
http://www.vtstateparks.com/pdfs/underhilltrails.pdf
Next morning on the way up Mansfield started easily enough. 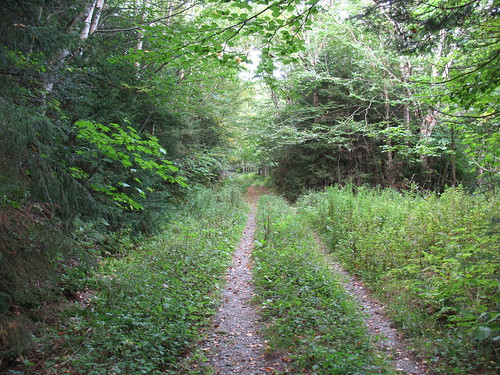 Then things got real on the Maple Ridge Trail up to the Forehead, topo map shows about 1500′ in just over a mile. 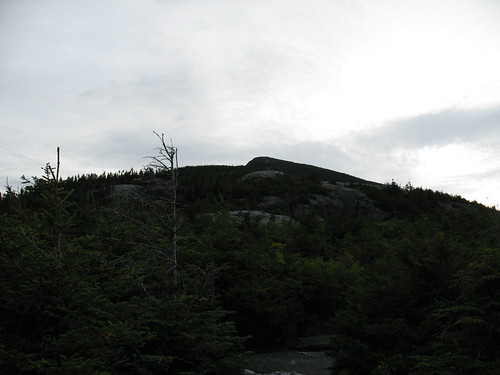 Getting up to the Forehead, there was real weather rolling in from the East.   The ridgewalk became a subtle race against time as I could feel the normal thermals kicking up. 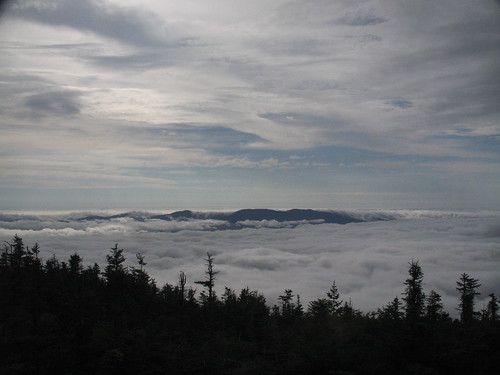 After a roadwalk past the visitor center area and gigantic radio antennae, I hit the Chin, completing my 4000 foot peakbags of VT.  Looking S, I could see the weather really coming in now.   What the still pic doesn’t show is the “flow” of the clouds up and to the west (to the right): 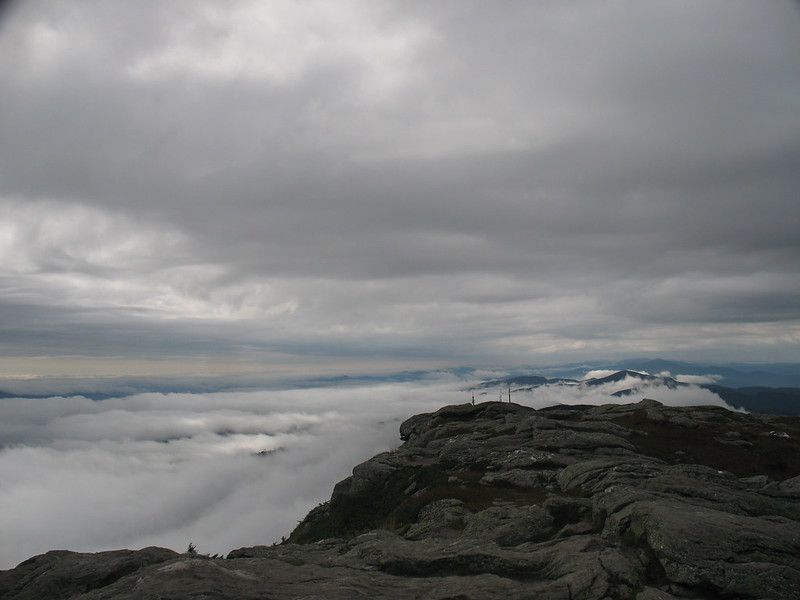 I hung out with the Summit Steward for a while, once again a great experience, the GMC knows their stuff.  Over the time I was there she went from wearing a Tshirt and shorts to pants, a long sleeve shirt, down jacket, hat, and scarf.  Finally, I was too freezing to stay so I headed down the Sunset Ridge Trail.   On the way there’s a side trip to “Cantilever Rock” which is exactly that. 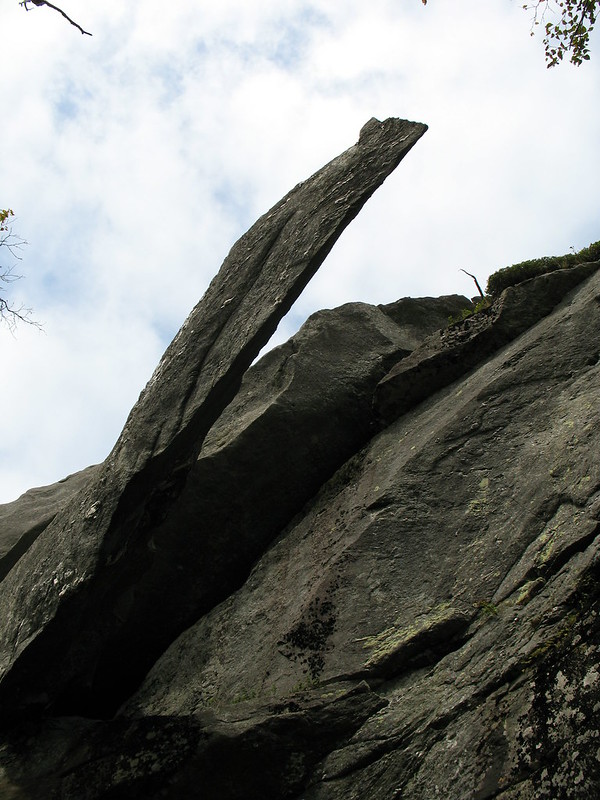 The picture doesn’t really do it justice.  There’s a nice flat lawn under it, a good place to take a break for lunch (tortilla and cheese).

A mile or so later, it was back on the Park road and the car. 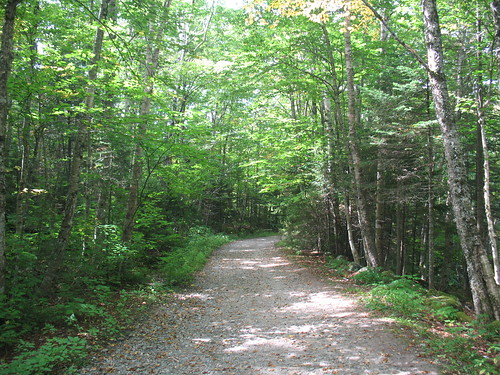 I’m definitely heading back to VT for some of the other peaks, the people were great, the trails were great, and VT is a beautiful drive.