Gather round boys and girls, and hear the tale of my trip through the Pemigewasset Wilderness back in ’13.

I wanted to try and get a hike in the Whites before the mobs came, so I drove up early the Saturday morning of Memorial Day weekend.   By the time I got to the parking area outside Lincoln, it was around noon or a little later, cloudy, cold, and misty.   In fact, as I parked and went into the Ranger station, the folks there were huddled around the woodstove, drinking warm things and eating warm food.   Even in the relatively warm cabin, they were bundled up.   Ominous.

They told me that a group of guys had left about 30 mins before, heading for the campsite at the cirque end of the wilderness.  Flush with caffeine and bravado, I boasted that I would catch them.   (I had to, since that was where I was going to camp.) Groups always travel slower, so boasting aside, I knew I could catch them.

It started well enough, cool and misty, with easy trails beaten down hard by the bazillions of people who hike the Whites each summer.   There were a couple of bridged stream crossings, at least when the river was huge, and we were near the parking area. 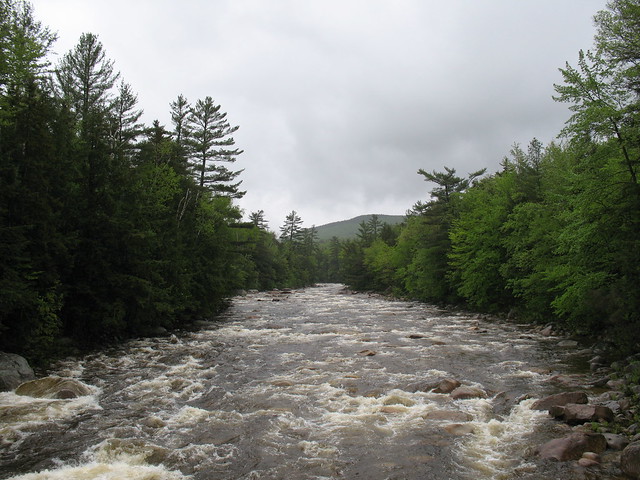 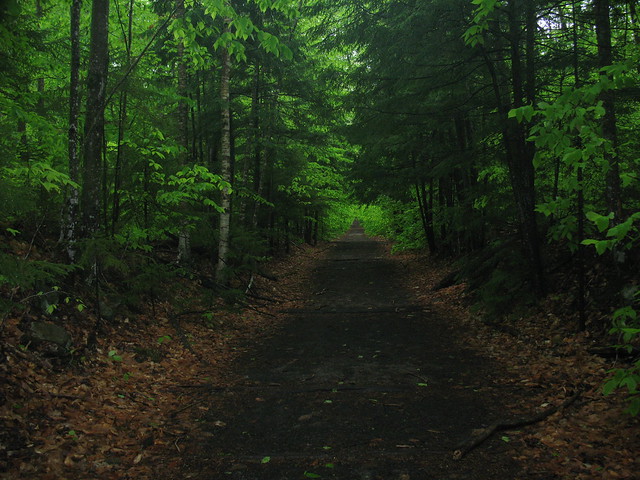 I began to question the wisdom of the trip. 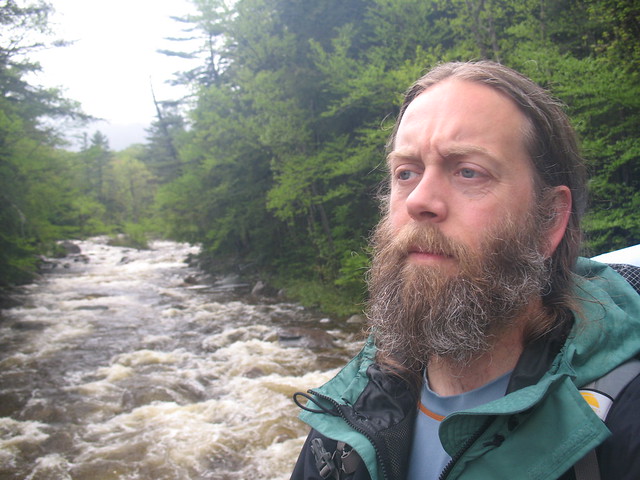 I had raingear with me, and a bag that was at one point rated for 20 degrees. Moving along, enjoying the light overnight load I was carrying I cruised northward along beaten trail for a long time. It gradually got less flat, and there were several formidable stream crossings; probably little brooks in the mid-Summer, but hip-deep whitewater on a rainy May weekend. I caught up to the group ahead of me after a few miles, and while we didn’t necessarily “form up”, we did sort of assist one another in the fords, keeping them to rock-hopping wherever possible. My feet got wet.

Because why not, and because it was May in New Hampshire, the rain gradually changed to snow. 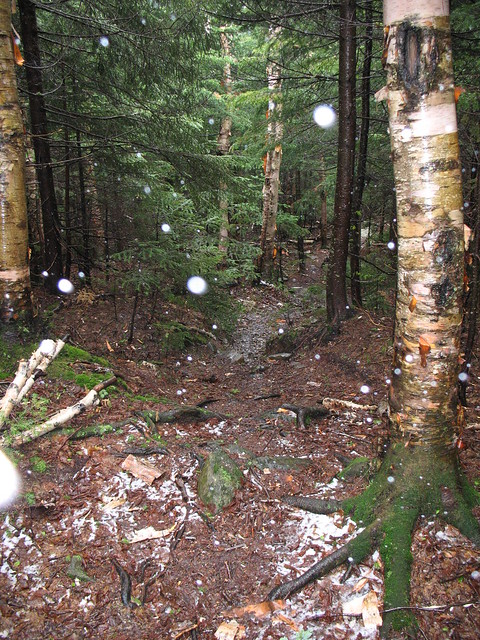 When I reached the official campsite, it was a muddy, hilly affair, and the group of guys was right behind me. I had 2 options – stay, and climb the ridge tomorrow (the ultimate goal was to talk Franconia Ridge back to the car) – or push on up the ridge. I knew the Galehead Hut was up there, and at worst I could camp on their porch. Up I went.

By the time I got to the top, it was snowing and blowing fog, and miraculously, the building was open! I went inside, and although it was freezing in there, it was DRY. I peeled off my wet stuff and left it hanging on some benches while I explored. Turns out there were two complete lunatics there – they had gotten up at midnight and hiked in up over the Bonds, they were doing the famous “Pemi Loop” in 2 days, although I later found out 1 of the guys had done the entire loop in 1 continuous hike. Not for me, thanks.

Shortly thereafter the off-season caretaker showed up, a nice young woman who explained the rules, and who I helped get into the mechanical room downstairs so that we could turn the propane on. Once done, we went upstairs and made tea, and boiled things for dinner. The 4 of us huddled around that old cast iron stove for a while, before turning in. She warned us that there was a resident marten, who, while he didn’t necessarily eat things, he did race around the kitchen all night knocking things over.

I had the place virtually to myself, so I picked a bunkroom separate from where the other 2 guys were staying.
When I woke up in the morning, pretty damn cold (remember, there was no heat), I discovered that I had torn something pretty spectacular in my right knee, and it was ridiculously painful. I realized no Franconia Ridge for me.
Then I looked outside.

This is May, remember: 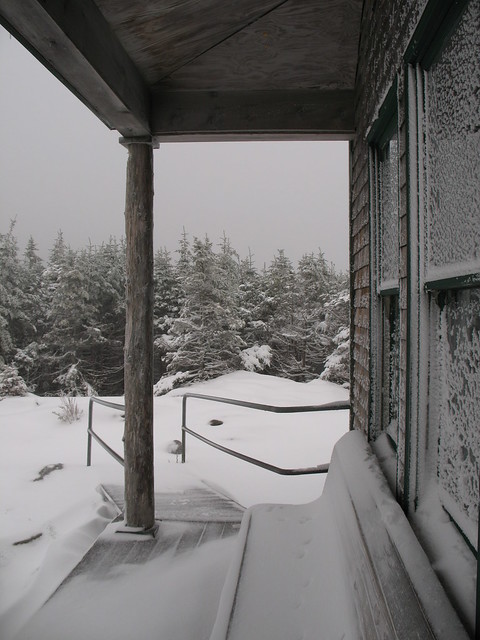 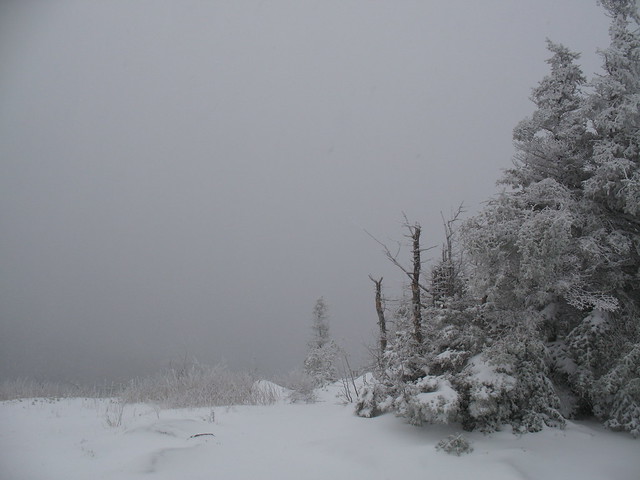 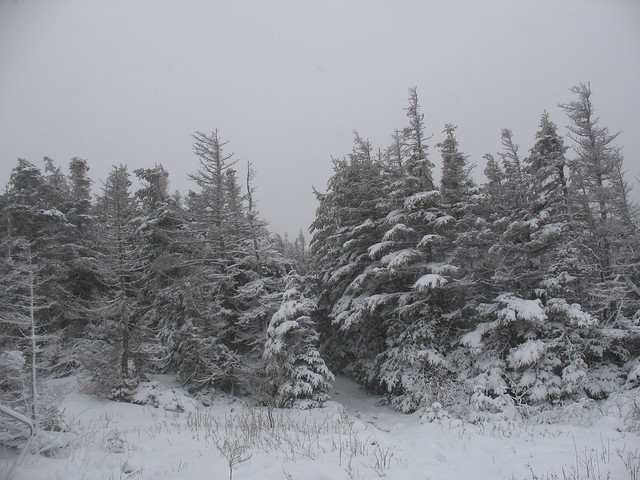 There’s a side trail, not the AT that runs down Franconia Ridge, that peels off just before Lafayette. Even in the trees, I could hear the wind HOWLING, and the rocks were covered with ice – not just rime ice, but a LAYER. Did I mention I had no spikes? I took the Skookumchuck down, because I was a) miserable with pain in the knee and b) going to die if I tried the Ridge in this weather, which showed no sign of abating. 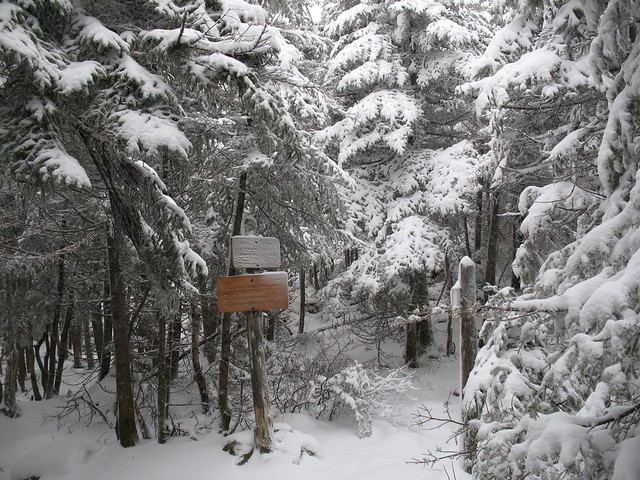 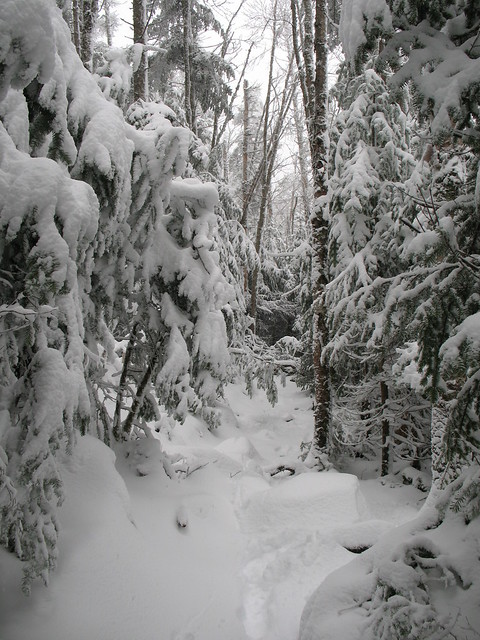 I made it down to 93 just as the cars put their lights on. Probably mid afternoon if I recall, because it also started sleeting. There I stood, leg up like a lame horse, wet, along the side of the darkening highway when finally I got a hitch back to Lincoln. It was one of my longer hitches, probably because of the time of day, weather, and general population on the highway. I walked back into down, hobbling, until a pizza delivery guy picked me up and drove me to my car, how awesome was that?