If you’re looking for another story of swashbuckling adventure, filled with daring pickup truck hitches, pictures of snowy peaks, and musings on the proper way to eat couscous, this won’t be for you.  Old uncle Smokebeard’s going to get a little real for a minute.  Here are some thoughts going around in my head as I recover from my hike.

It’s been a month since I got to the Canada border.   It feels like just yesterday, and a lifetime ago.  I took my time getting home, spending a few days in Vancouver (liked it), and one overnight in Dulles Airport (hated it).  I’ve been in touch with a few folks from the trail, who seem to be in a similar zone trying to get back into the Real World.  What’s life like after hiking every day for 156 days?   Kind of rough.  If you’re a twentysomething some of this might not apply to you, or maybe it does.  As Indiana Jones once remarked, “It’s not the years, it’s the mileage.”  I’m up around 6,000 miles at this point.  Physically and mentally it’s been tough.

Overall, I’m not sure what I expected.  Thru-hikes are supposed to be the stuff of life-altering experiences, when people set out lost and find themselves, or come back with new outlooks on life, or find some new purpose.  For me, it was a great vacation, I saw things I never imagined, and had a great time.  But I’m still just me.  I remember talking about this to a hiking buddy and with another hiker, an alum from ’93.  I think for folks in their 20s, or for people who set out with a specific goal in mind, this becomes a life-defining moment.

The AT was like that for me—at 28 I found a lot of determination and grit, gained an appreciation for new people and places, and learned about Leave No Trace.  It’s what led me to become an MATC caretaker a few years later.  Now in my *cough* late 40s, not much has changed from before my hike.  But regardless, I am damn proud of what I accomplished.

Things are weirdly the same as they were before the hike.  It’s like you’re in some kind of time bubble, where everything else is frozen while you’re moving.  There’s some new road construction happening in my neighborhood, and it’s the end of the baseball season.  But other than that, the world kept on spinning.  Not much has changed politically or socially here, and people all over the world are still throwing rocks at each other.  People still trash the environment, and buy things they don’t need.  I’ve still got the same things going on as before.

I’m sleeping a lot.  Or was, the first few weeks I was home. I’d get up, eat breakfast, walk the dog, and then sleep on the couch with said dog until around lunchtime.  I think it was jet lag related at first, then just enjoying the ability to sleep a) more than eight hours at a time and b) whenever I felt like it. 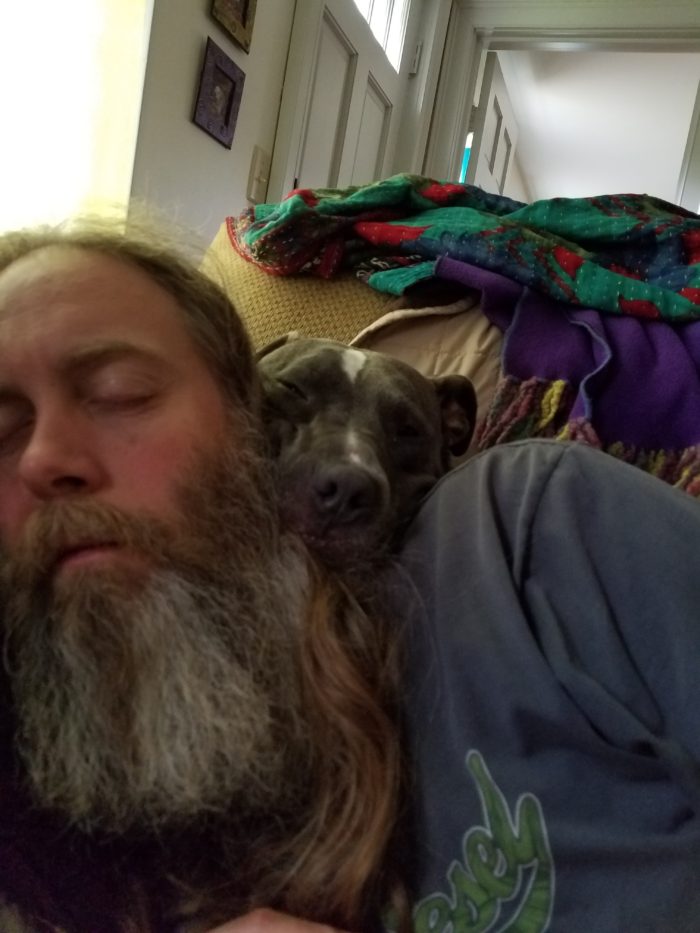 My lower back is stiff.  My feet hurt, mostly the arches.  Every day, I get out of bed gingerly, not wanting to put too much weight on my arches and ankles too soon.  I figured I had plantar fasciitis to some degree.  The stiff and creaking ankles are kind of a new, disturbing thing.  In the morning, I’m like the Tin Man from the Wizard of Oz.  The hips are sore, too.  Someone told me this might be because my leg muscles are out of balance with my glutes.  I’m losing muscle mass all over the place, despite gaining four pounds.  My pants still don’t fit.  I’ve been hitting the gym as often as I can, but now that I have responsibilities again, I can’t get there that often or for that long.

A few things I’m using to try and get better:

Post-trail blues are a thing.  In-trail blues are a thing.  I think both are strongly related to your exercise level and calorie intake.  One day I remember being completely fried in the southern Sierra, going down the Golden Stair, literally hating hiking, and barely able to put one step in front of the other.  I know now I was at least 700 calories in the hole every day, and sleeping like crap.  Nutrition in normal life is just as important as trail life—avoid too much booze, too much sugar, stick to low-glycemic foods—basically eat like you did on trail (only less of it).  Both during and after blues are also related to normal life stuff—goals, expectations, accomplishments, etc.  I’ve been texting with trail friends, which helps at least to know I’m in good company.  Keeping an eye on any social media you’re doing also helps, although it’s gone pretty quiet now that everyone’s off trail.  It’s nice to stay plugged into your trail life, and let it slowly simmer down rather than going cold turkey.

I think part of the issue is that you’re going from what’s essentially a six-month vacation back to work.  Or when the summer’s over, you head back to school.   Who wants to do that?  It’s pretty darn nice not to have to worry about laundry and cleaning the house and paying the electric bill.  Sure, on the trail you’re working all the time, but your work is 100 percent your own making, and largely enjoyable.  Having to worry about things like mail and bills and watching the news and mowing your lawn can be a drag after all that time.  I think the word is “banal.”  I find a lot of things I’m doing these days very boring.  People are boring.

You can get a certificate from the PCTA to celebrate your accomplishment, but unemployed Smokebeard doesn’t feel like donating at the moment.  Luckily for me, my friends and family cooked up one already.

It sucks being unemployed.  It sucks even more that I can’t collect unemployment.  But unemployed, and often too sore to get yard work and other chores done, is the worst.  It could be a great opportunity to tackle some long-overdue projects, but sore legs and an empty wallet put a damper on the things I can take on.

Since I do have the time, I’m making albums and videos out of my pictures, and doing a lot of reminiscing.  I also made myself a lot of videos the last two weeks; watching those is very interesting; little things I’d already forgotten are coming back to me.  Reading my trail journal helps, too, and I’m starting a new journal.  I find that I like journaling, even just a few thoughts every day.

In time I’m sure some of the sadness will fade along with the soreness, replaced by fond memories.  I heard from another hiker there’s a theory that we remember things more fondly over time.  This is an evolutionary trait that keeps us willing to engage in new activities and retry old ones.  We’ll see how that plays out.