Last night I left Shelter Cove Resort after finally getting my UPS package. I made a pretty good pace uphill to the lake, despite having 7 days of food in my pack. Due to a mix-up, I ended up with 28 snack bars, almost a pound of macadamia nuts, a bag of flavored chickpeas, a big bag of tortilla chips, and a whole package of crapricots. On top of my resupply. And a ziploc bag containing half a pizza. The vultures in the hiker pavilion suggested that I hiker box the extra, but I told them no way, this stuff is primo.

But it’s amazing how taking a day off can recharge your batteries. While at first glance this trip seems like a vacation, it’s really like working a 70 to 90 hour a week job. When you’re hiking, you hike between 10 and 15 hours every day. When you’re not hiking, you are busy shopping, packing, sorting and mailing things. Of course if you are in your twenties, or if you are one of those ultralight nerds, you have plenty of time to take off, since you walk so much faster. I’m going to need a vacation from this vacation. 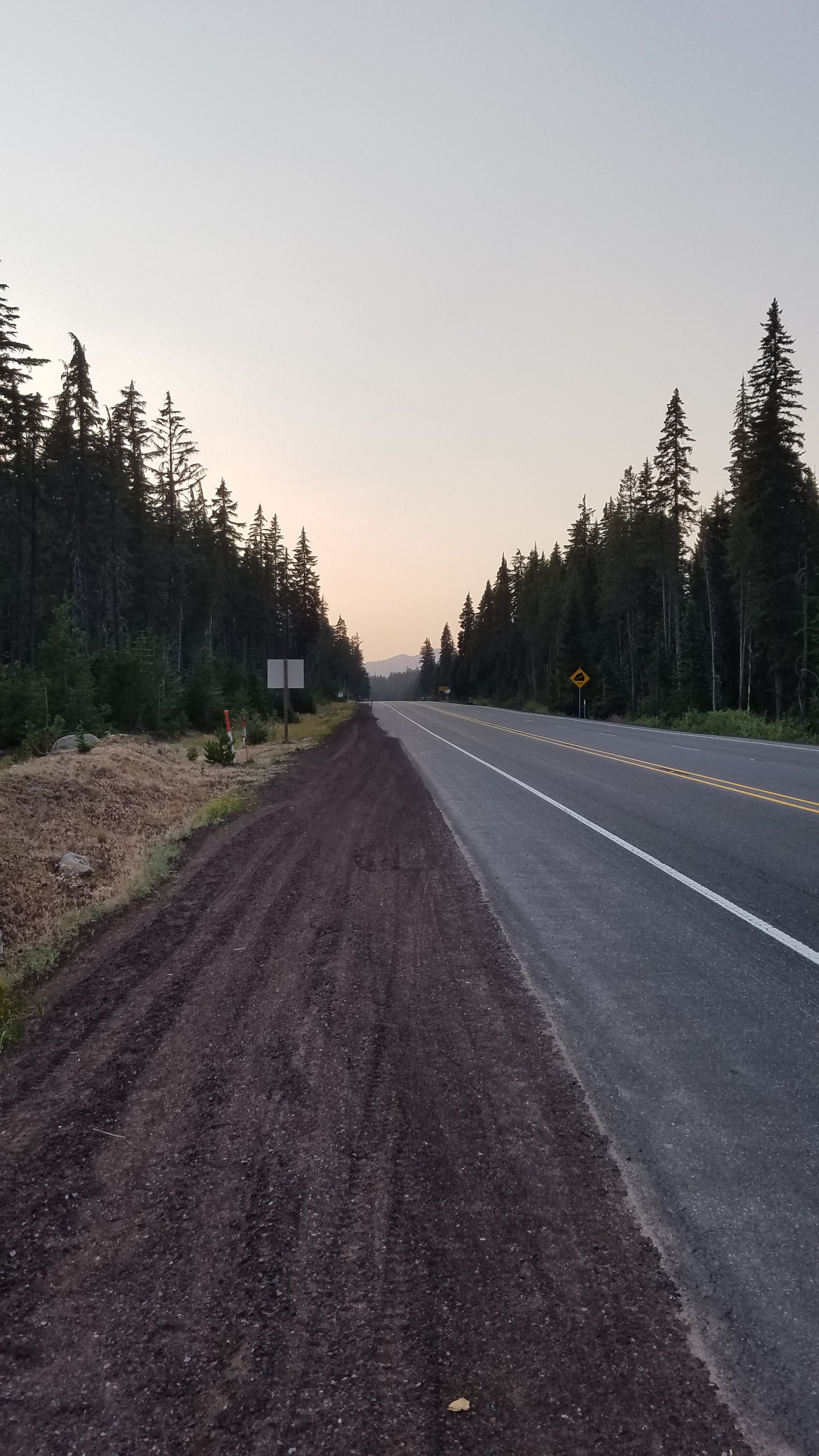 I had a great evening at the lake with three other hikers, one of whom I met at Mount Laguna so many days ago. Check out his blog at goatmanmike.com. Goatman, Happy, and Chilly Bin (kiwi word for a cooler) had packed out beers from the resort, and I traded a slice of pizza for one. We had a great conversation about the concept of wilderness and what makes something Wild. Happy was of the opinion that the more people who get out here the better, but Goatman and I are more concerned about overuse and the loss of the special quality that draws people here in the first place. I pointed out that with GPS tracks and social networking, all it takes is one person to share our route, and it’s no longer wilderness. Happy argued that there will always be more wild trails and places to explore, which I countered by saying that’s what they said about the buffalo, the whales, and the passenger pigeon, etc. Chilly Bin added that in New Zealand, their long distance trail, the Te Arora, has gotten double the number of people on it every year and is already showing signs of the infrastructure falling apart.

Once the Wild is gone, you can never get it back.

It reminds me of that quote from the movie Never Cry Wolf.

But it began the moment that I first saw the wolf. By the act of watching them, with the eyes of a man, I had pointed the way for those who followed.

Sadly we will never revisit the topic, because those three are 30 mile a day hikers. Like so many others that I meet, I will never see them again.

6am – Eating cold pizza on the edge of Rosary Lake while watching the bats scoop up mosquitoes. 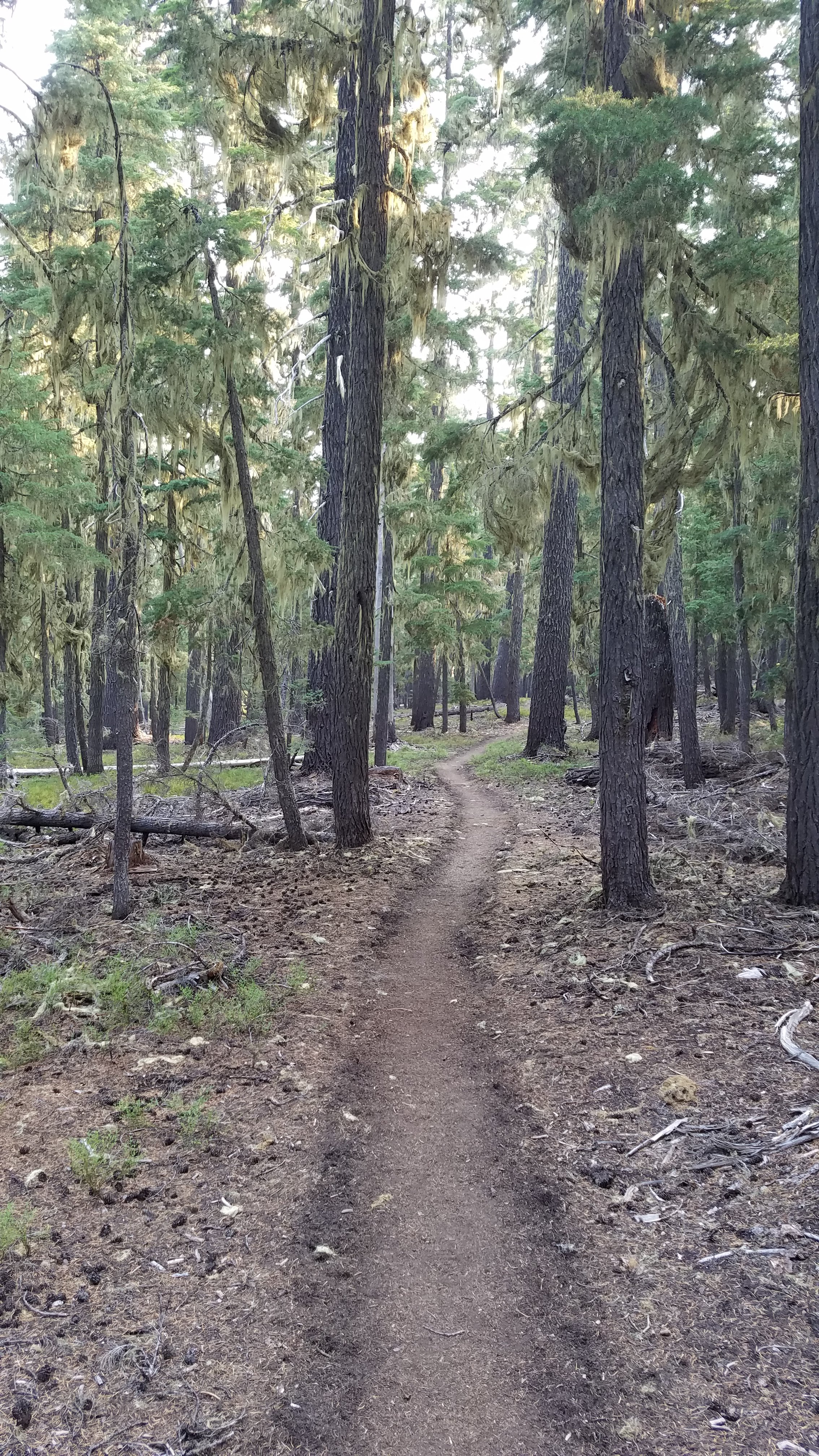 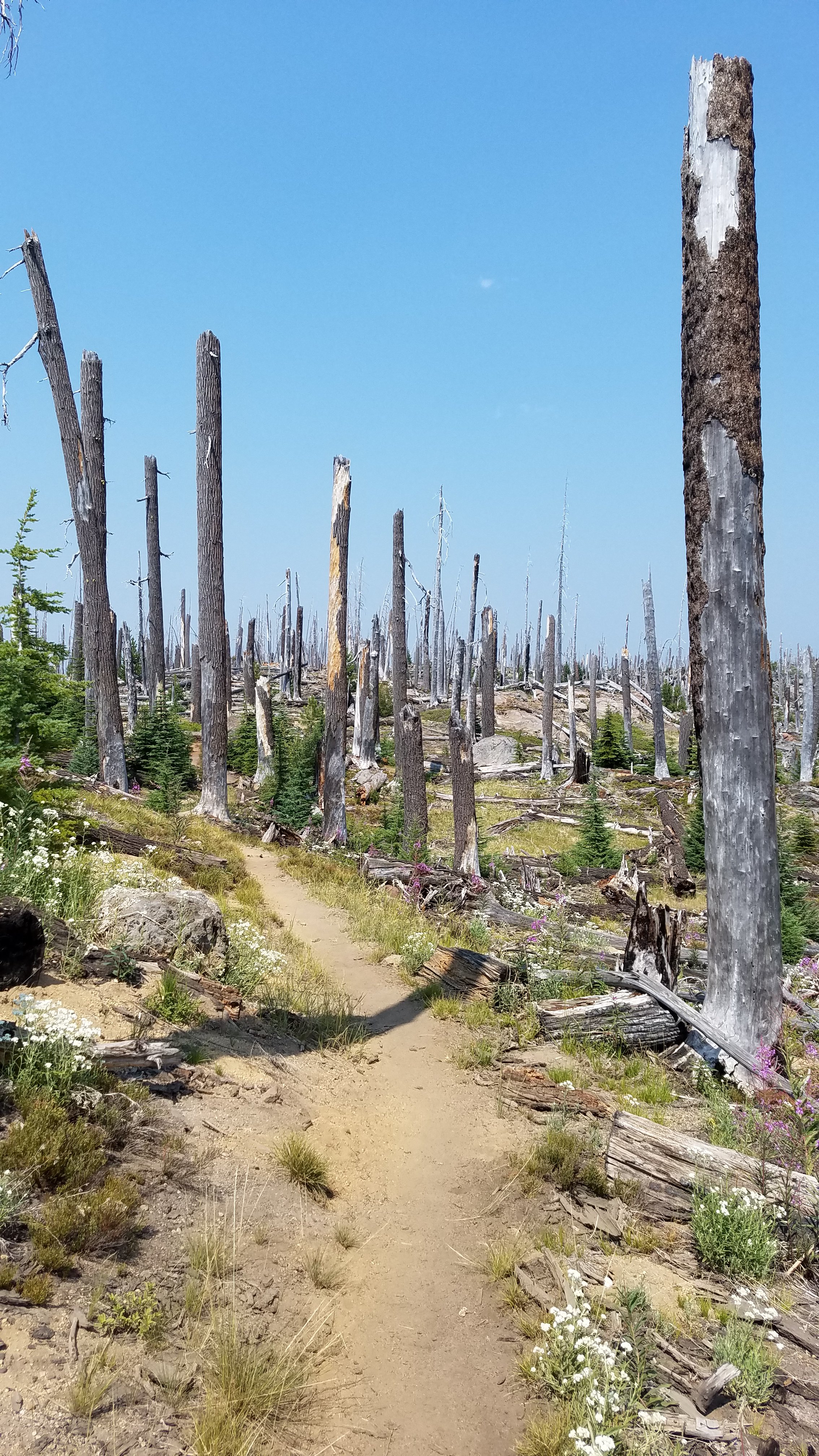 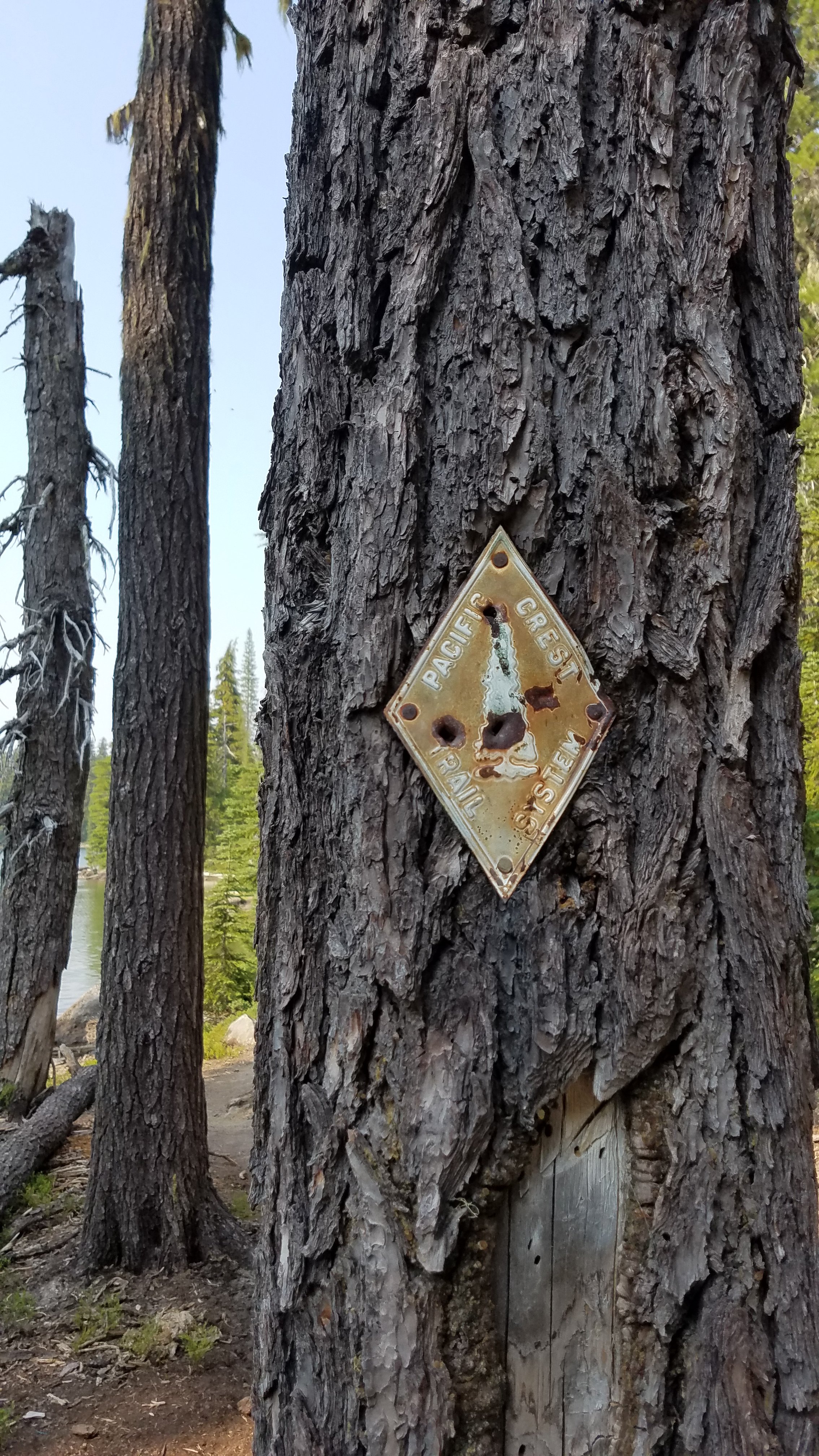 6pm – Hiding in my tent from the horseflies at Brahma Lake.

Today I passed Rosary, Maiden, Bobby, Charlton, Irish and Brahma Lakes, plus numerous small, rapidly drying ponds. Or as I call them, the Great Mosquito Foundries of the West. Luckily I got my bug-repellent shirt yesterday!

Starting to see some Canada Jays

There’s something about the forest, too, or maybe it’s the angle of the sun, but things are starying to feel more northerly.

It was pretty darn hot today. Because I don’t take breaks, I caught several hikers who were resting in the shade by one of the lakes.

I also met a couple of Rangers, Forest Service employees who were out doing trail work. One of them asked me if my PCT permit was readily available. When I said it was buried in my pack he just smiled and said that was fine.

Today was the worst day of the trip. At one point I found myself wishing that fate would give me a trip-ending injury. I don’t know if it’s because it is hot, or I’m tired, or it’s been 118 days, but my tank is pretty much empty. It will be nice to get to Sisters, although I can’t really afford to take any time off there either. As the saying goes, Winter is coming. Winter may be coming, but it was 98 degrees in Sisters today. Maybe my mood had something to do with the crippling heat? Hot or not, there’s no time for lollygagging.

My friends and family recorded a video montage, each of them cheering me on. I feel it will just be 100 times worse now if I can’t finish. Today was a long grind, a sort of mindless tunnel of heat and sweat and horseflies and foot pain. My one wish was to get to camp. I only did 24 miles, despite the easy terrain. It was a compromise between the miles I have to do and the desire to just sit down, drink water and eat snacks. It probably does not help at my toes are starting to blister again. I think it is this fine dusty soil that we are walking through. I cannot complain too much, however, because in 20 miles or so the trail runs over solid rock, a big old lava field that runs for 10 miles.

On a small, positive note, I passed the 700-miles-to-go mark today. Canada still seems very far away, and if I have any chance of getting there, I have to keep the pedal to the wall for the next 5 weeks.

I managed to turn it around today, taking advantage of the relatively easy terrain and absolutely gorgeous scenery. 10 out of 10. 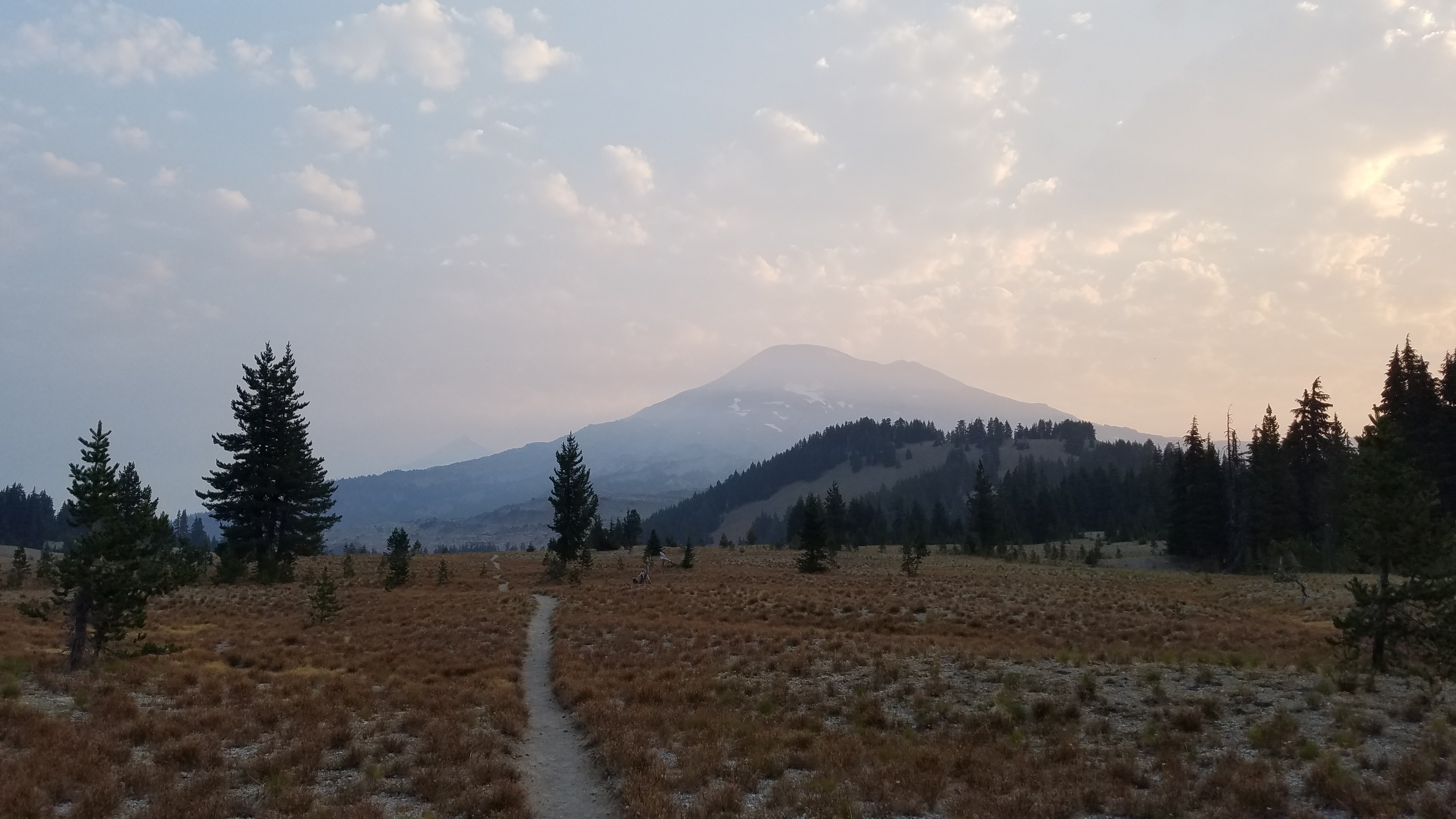 The trail round across the slopes of the sisters, old volcanoes. There were milky streams of glacier water, waterfalls, trails paved in obsidian shards, and lava fields. 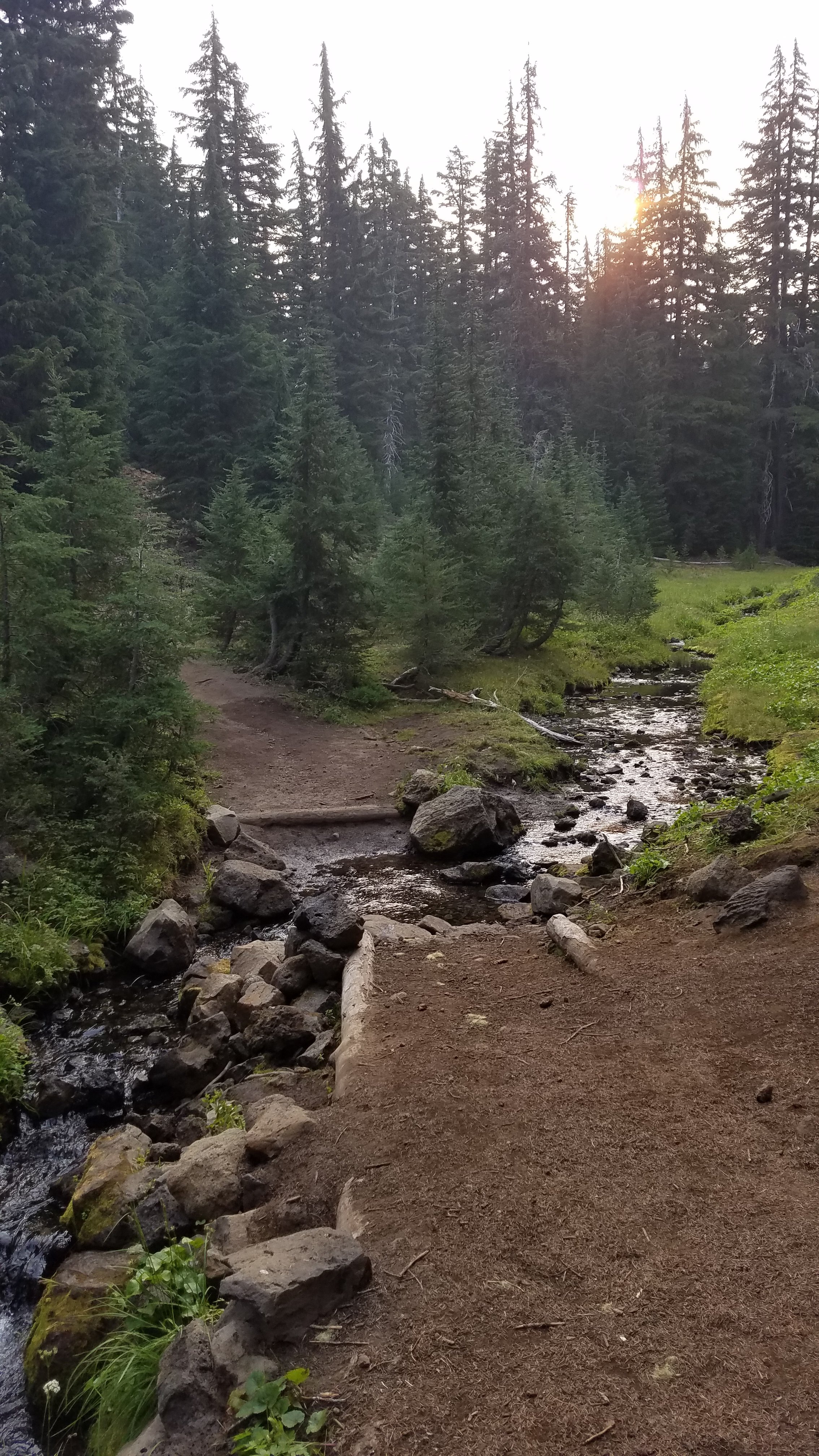 I kept the study pace all day, taking advantage of the cooler weather. I think the heat really does a number on me, at least when it’s 95 or so.

I ran into a bunch of weekend hikers down from Vancouver. When I got to the stream they were resting near, one of them said,”now that is an impressive beard.” Another chimed in with, “that’s at least a four month beard”, and finally someone said “that is a part-the-Red Sea kind of beard.”

I parted some butterflies.

I felt pretty awesome. I will admit to taking some pride in the fact that it is probably one of the top five beards out here. 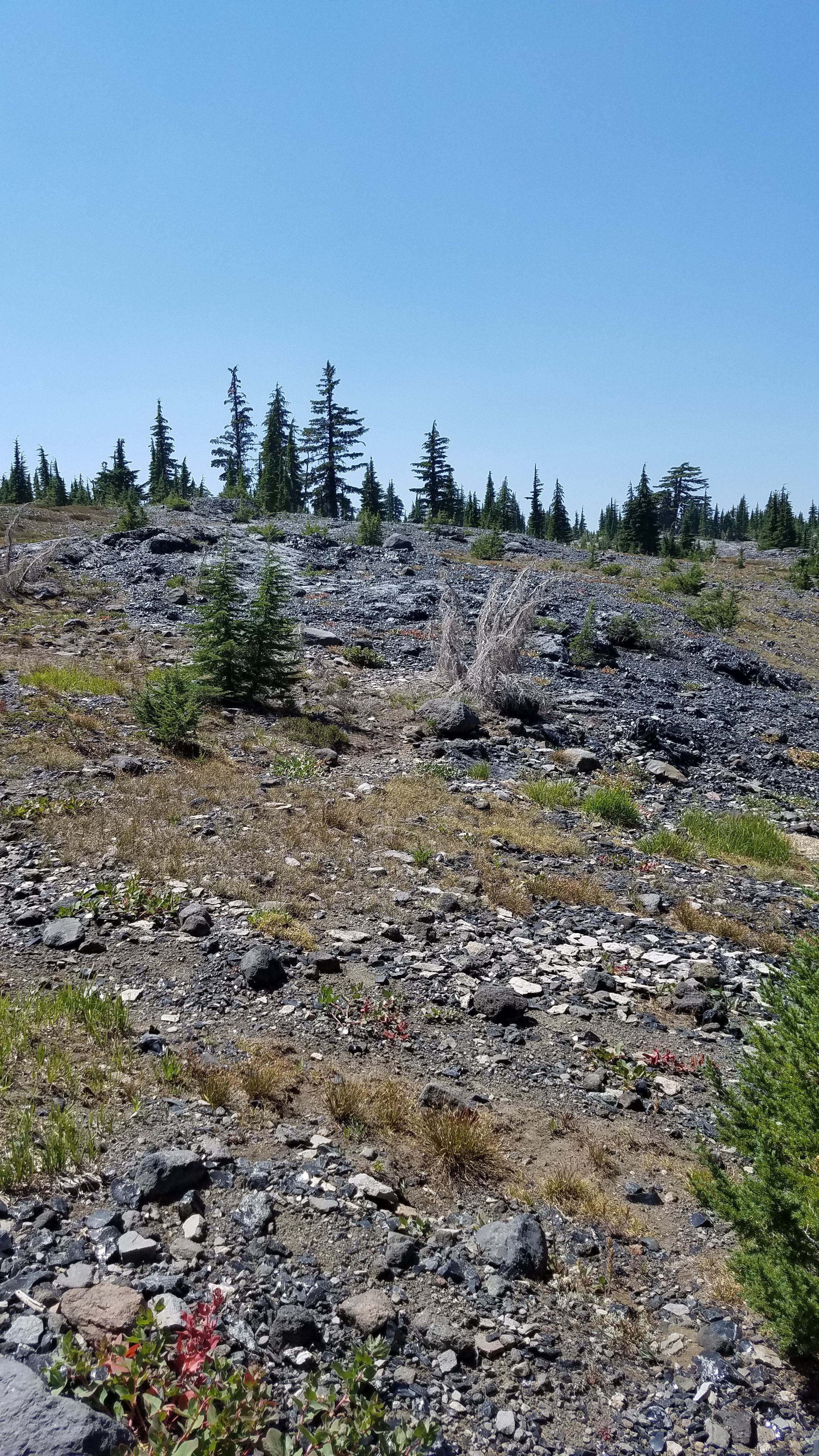 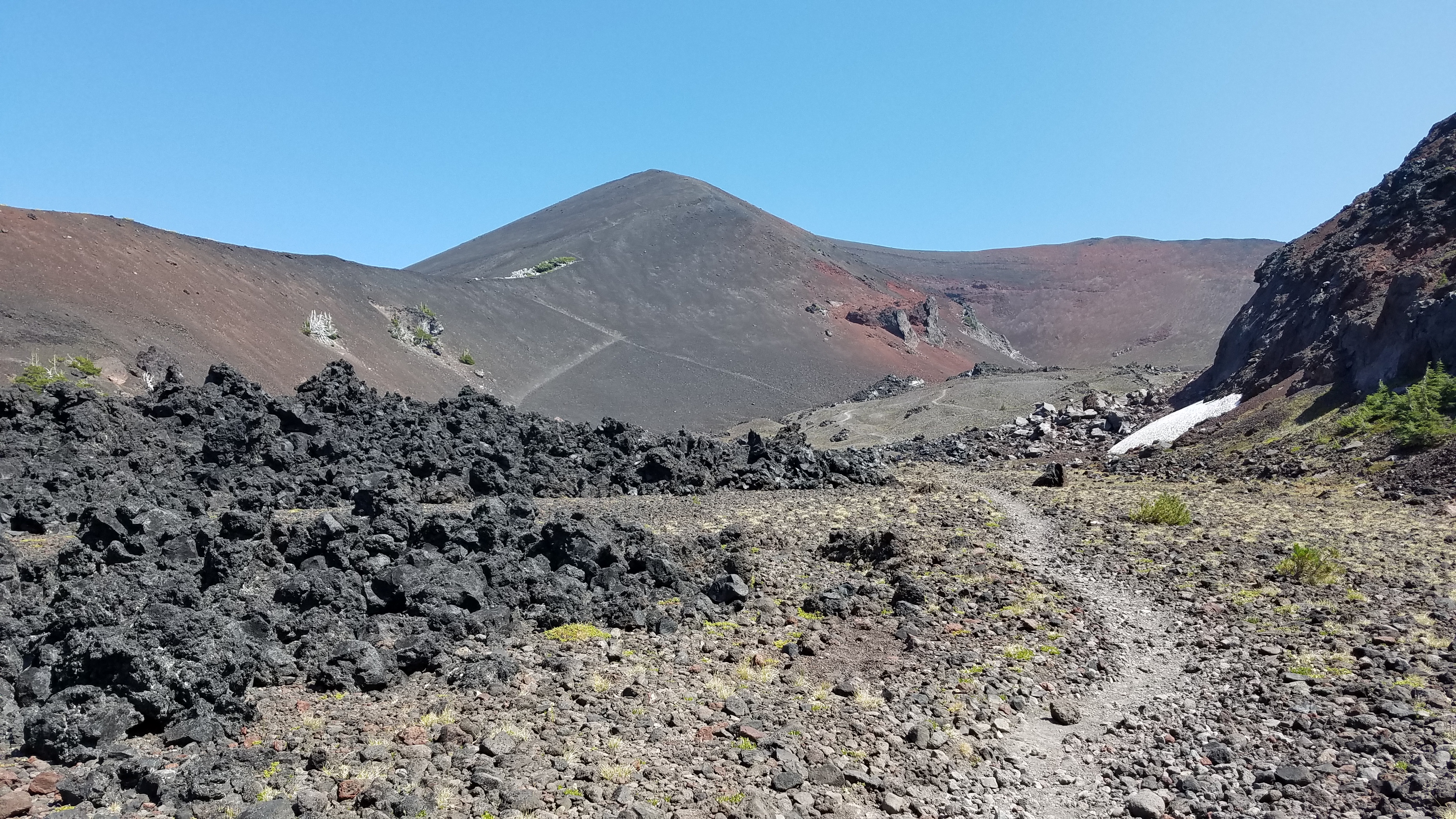 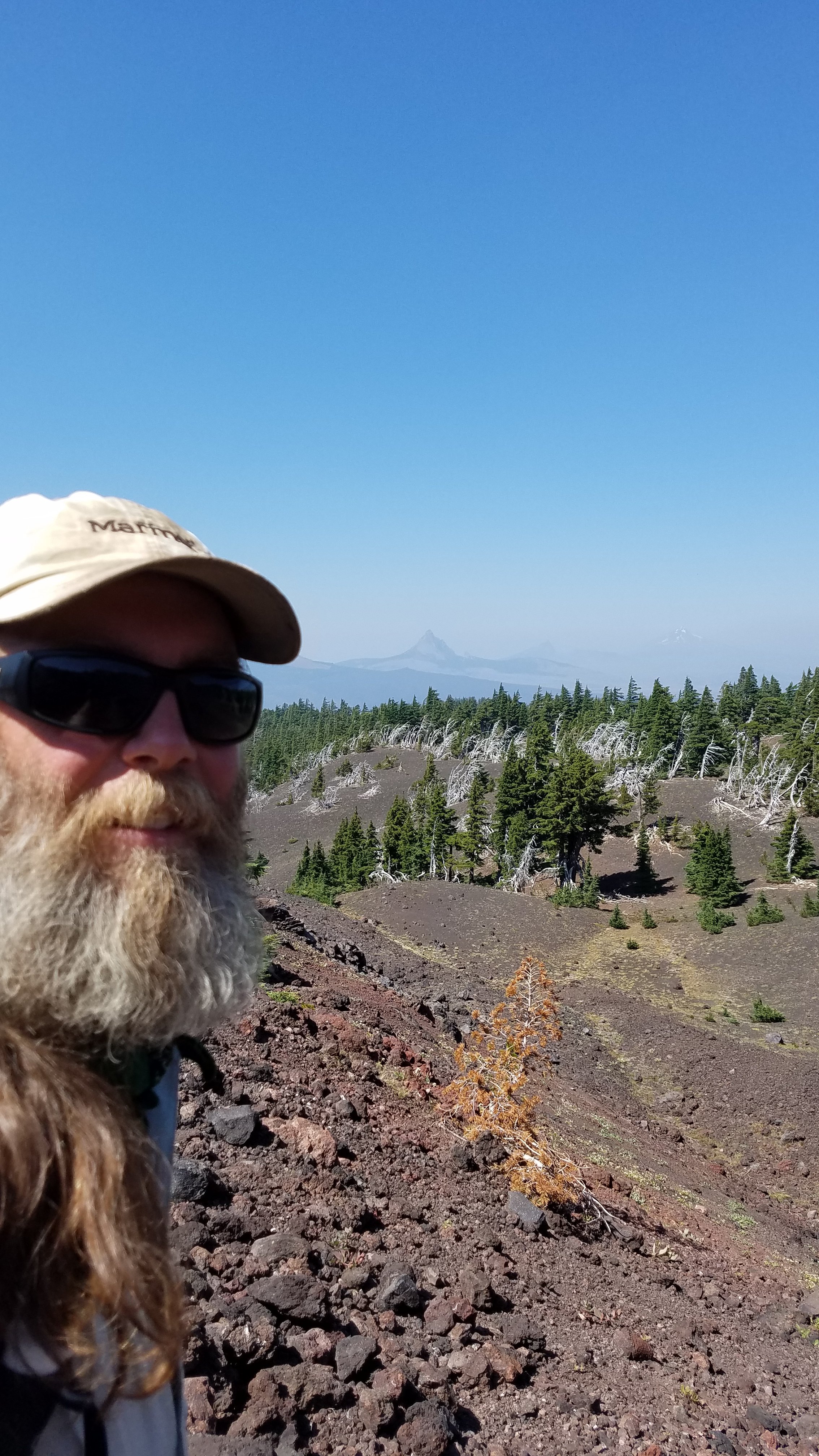 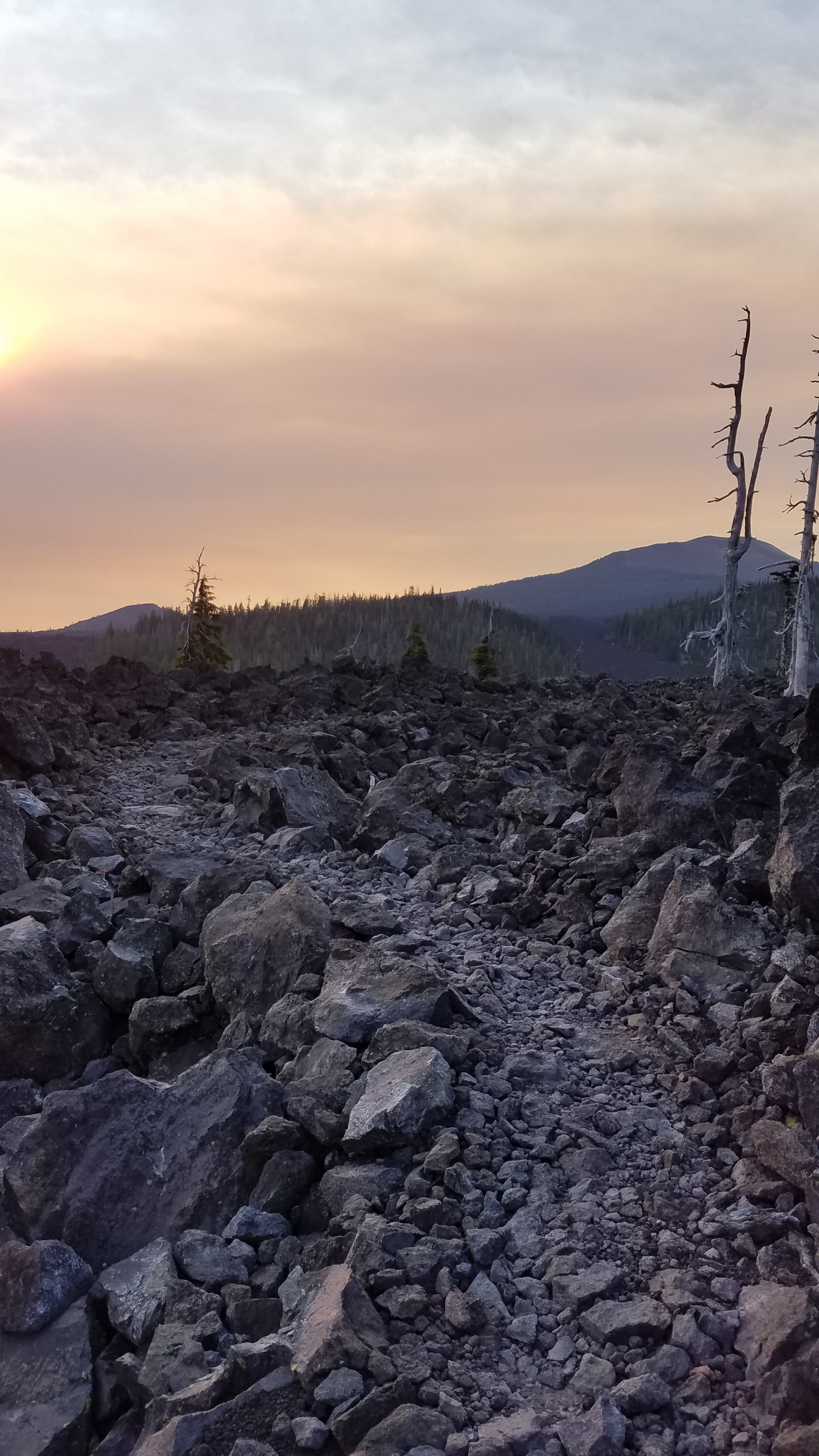 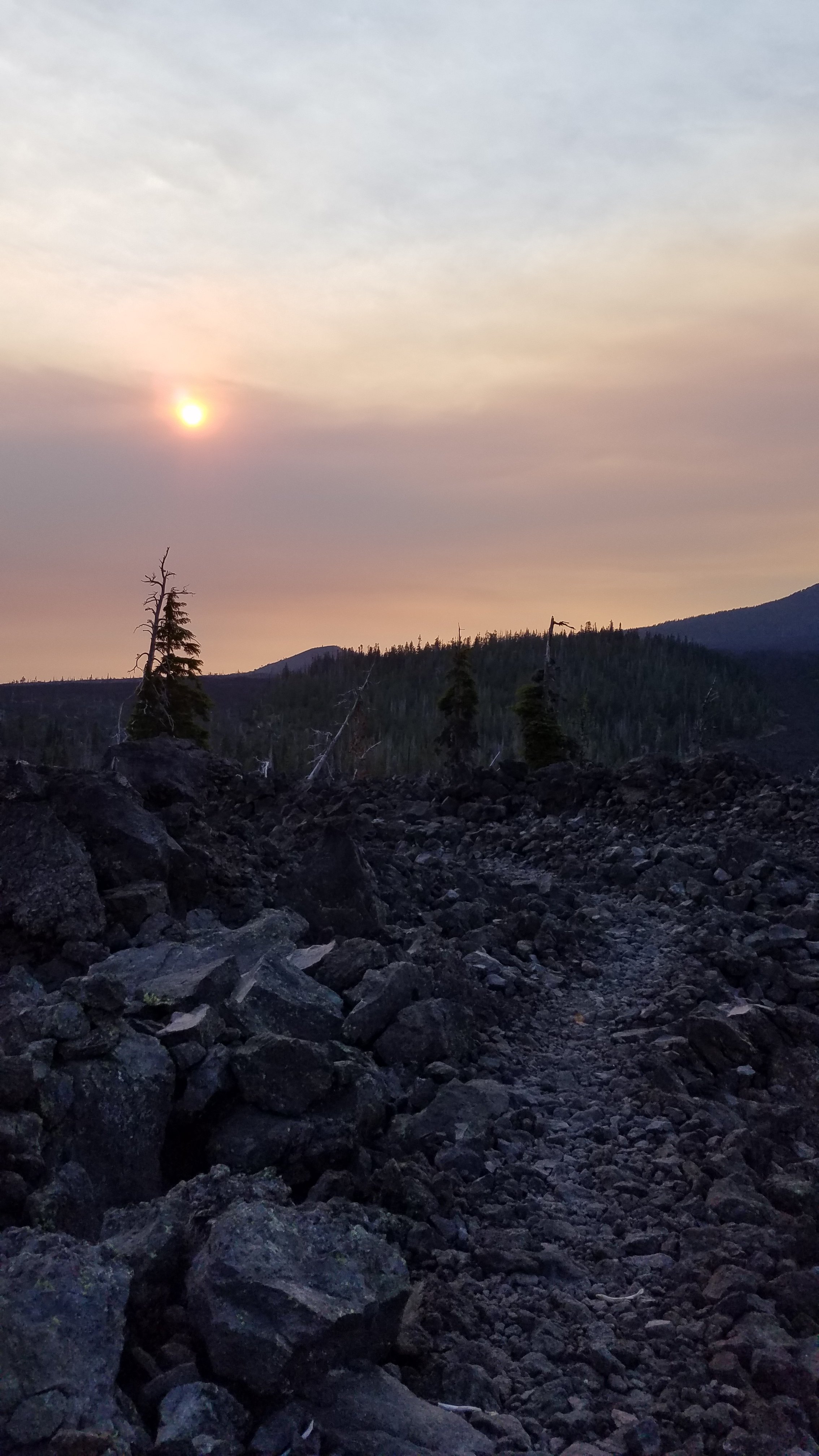 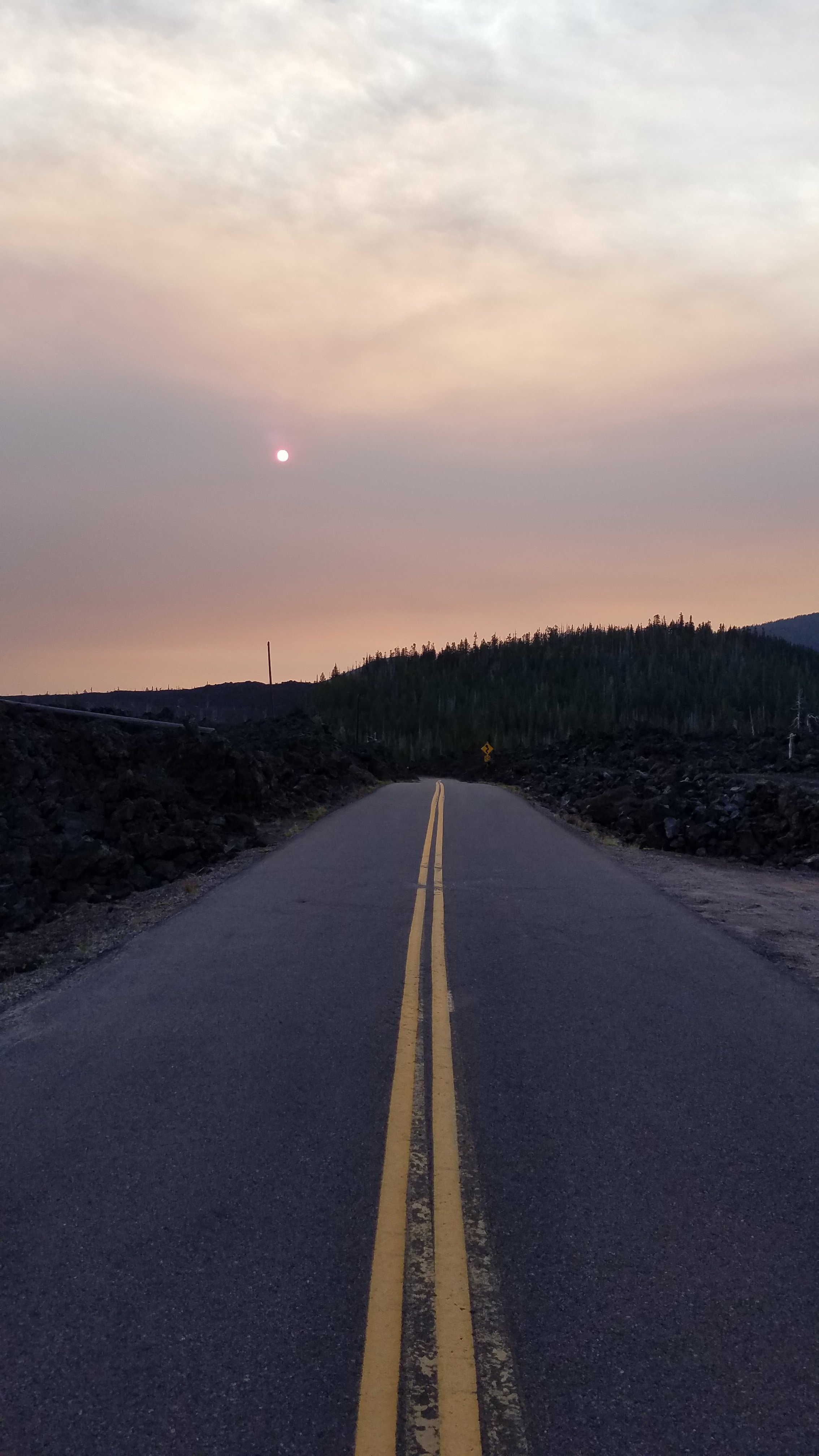 It was only 17 miles to Santiam Pass, but I had heard dire warnings about the lava field. People were saying that it was 10 miles, and hot, and I think someone mentioned dragons. So I did what any other hiker would, I got up early and was hiking by quarter to 6. Luck was with me, as low clouds settled into the pass, blocking almost all the Sun and most of the trail. I was actually cold. 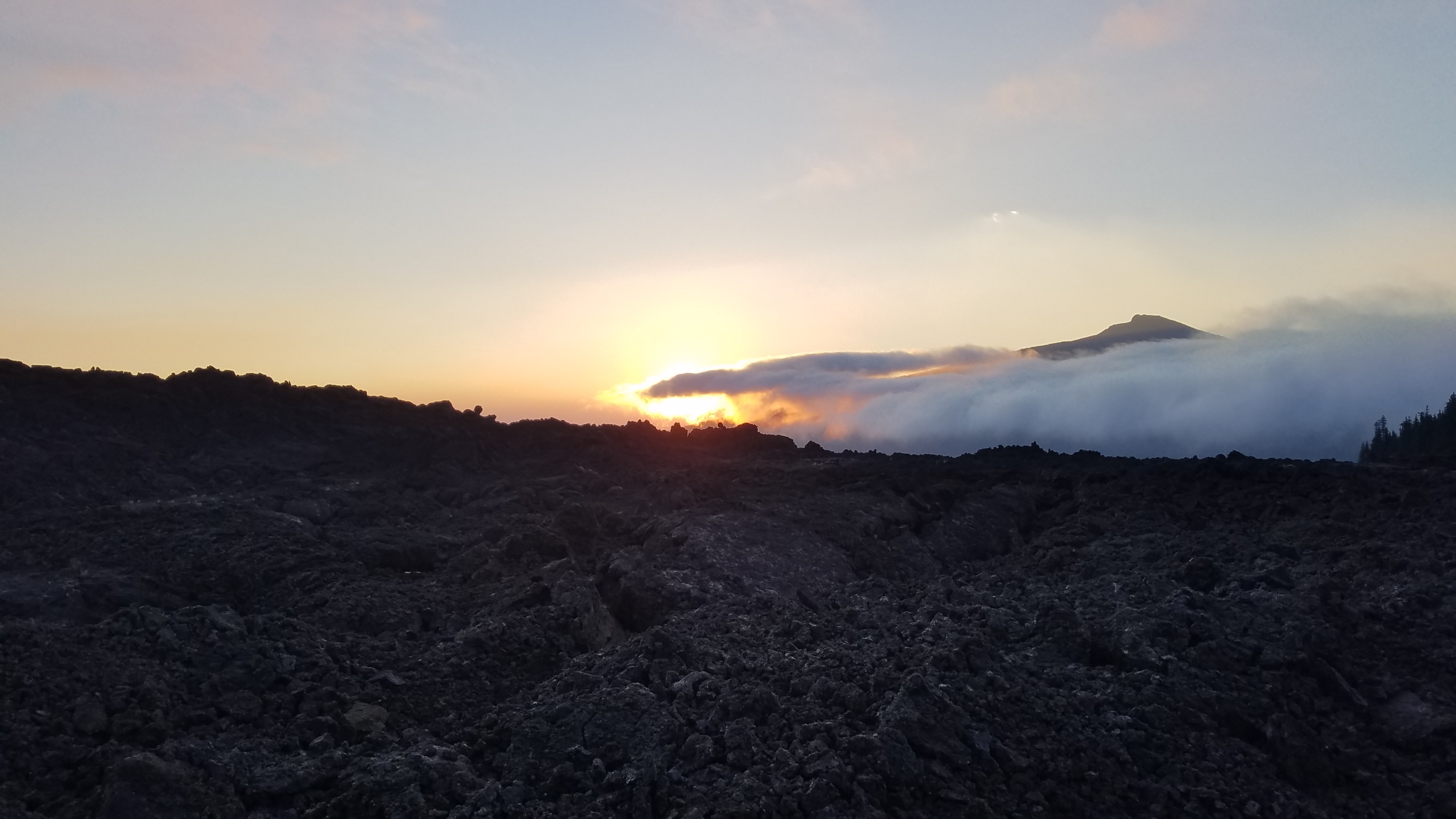 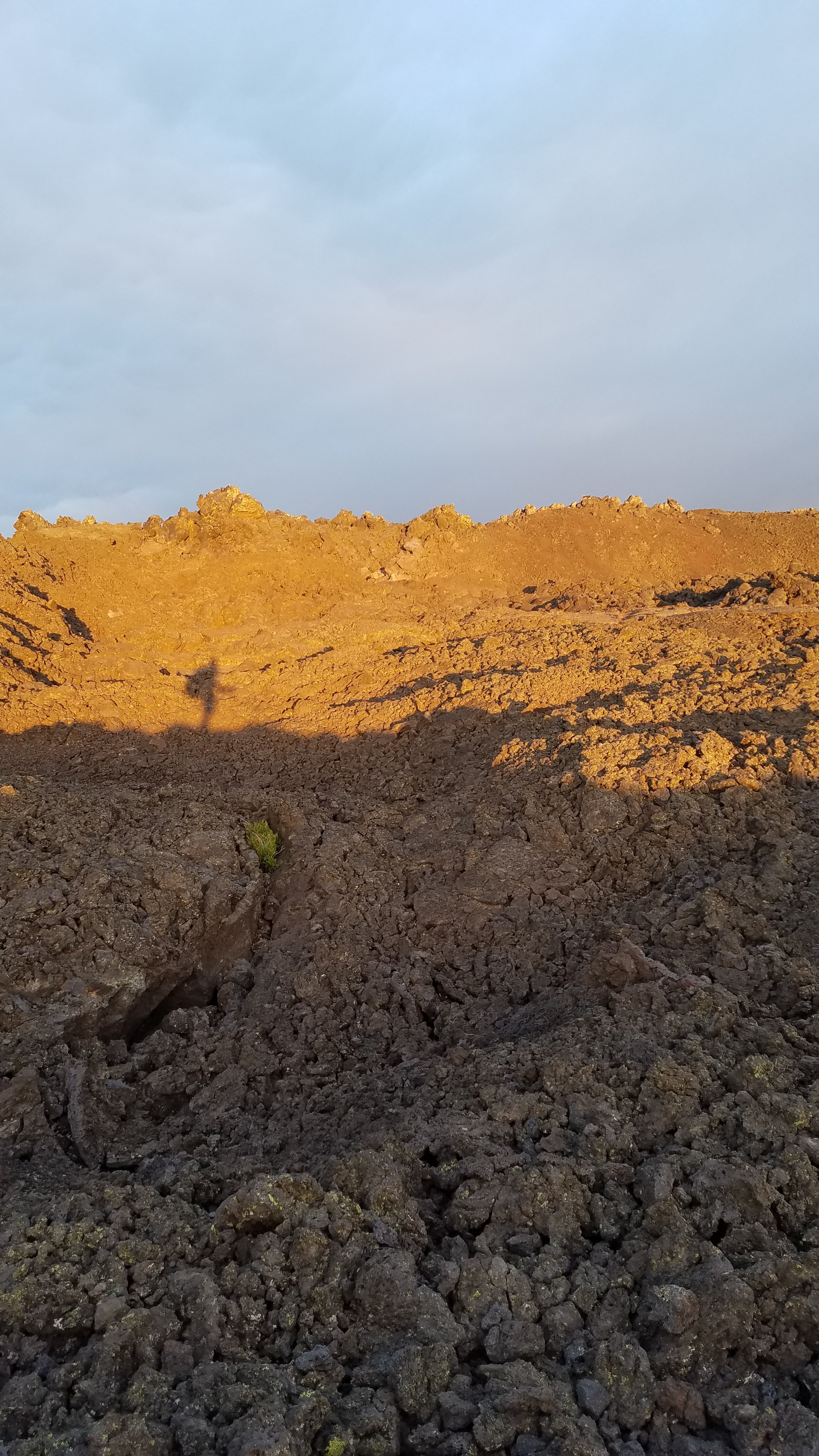 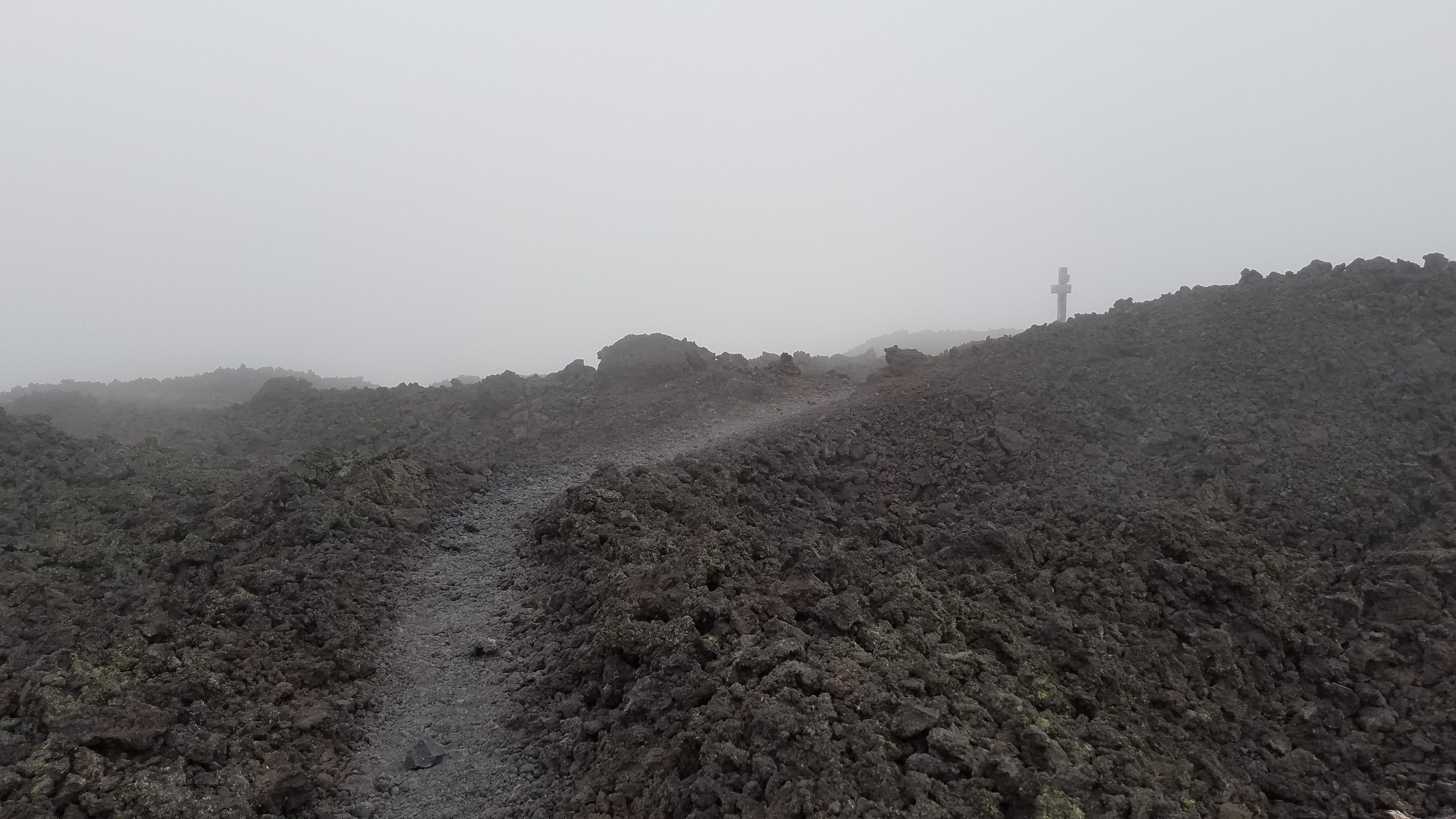 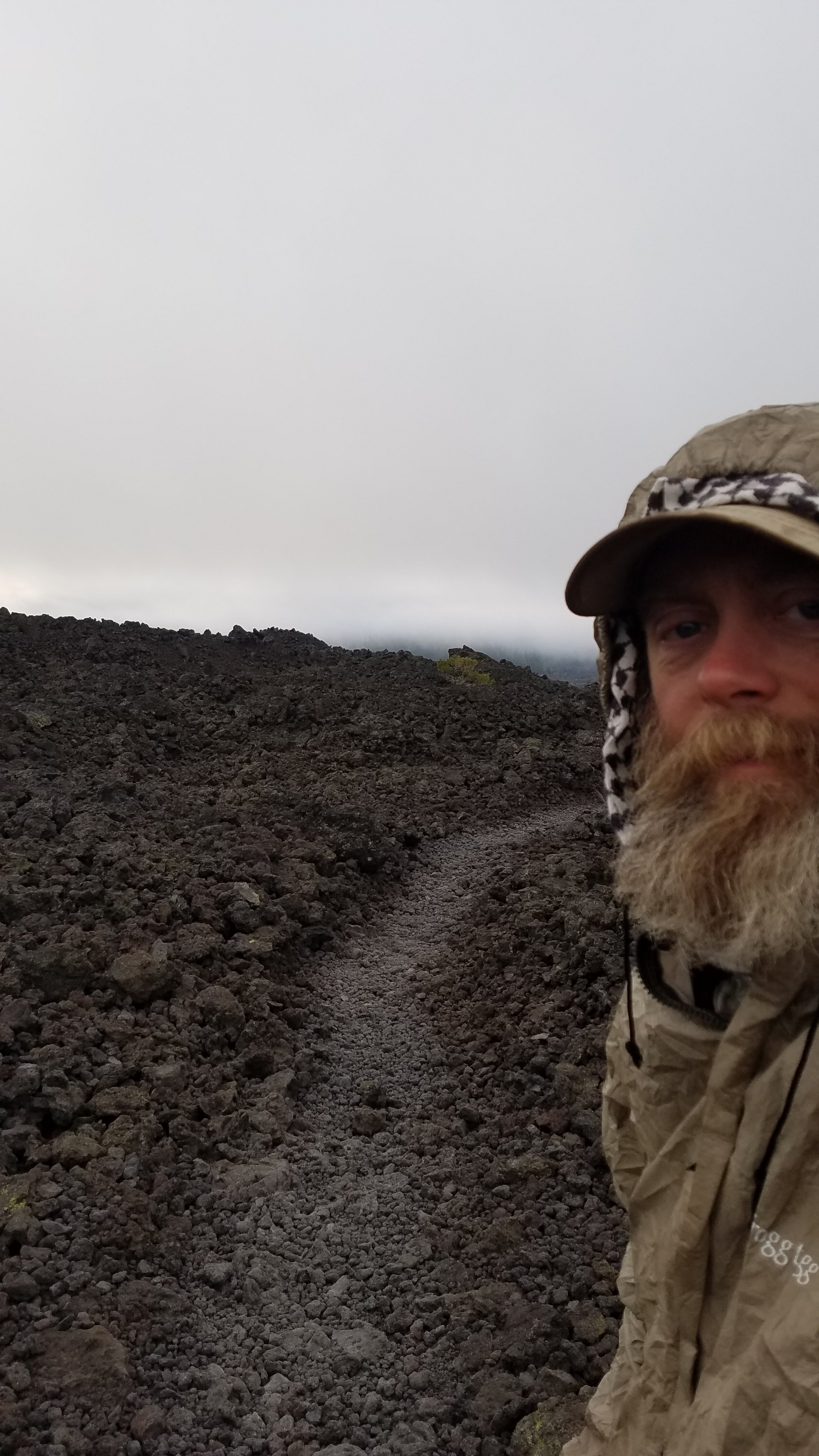 I have been thinking that the trail and the landscape is starting to look a little more northerly, and crossing the lava field in the clouds reminded me of New England. Pretty much any above treeline hike in northern New England looks like the lava crossing.

After only a few miles the climb petered out at about 6,000 feet and then began a long slow descent towards Highway 20. There were still periods where you had to cross lava, but the trail was generally smooth and even. At times it was annoyingly Sandy, so it was like hiking on the beach. I had brought plenty of water, but because it was so cool and cloudy I drank less than 2 liters all day. 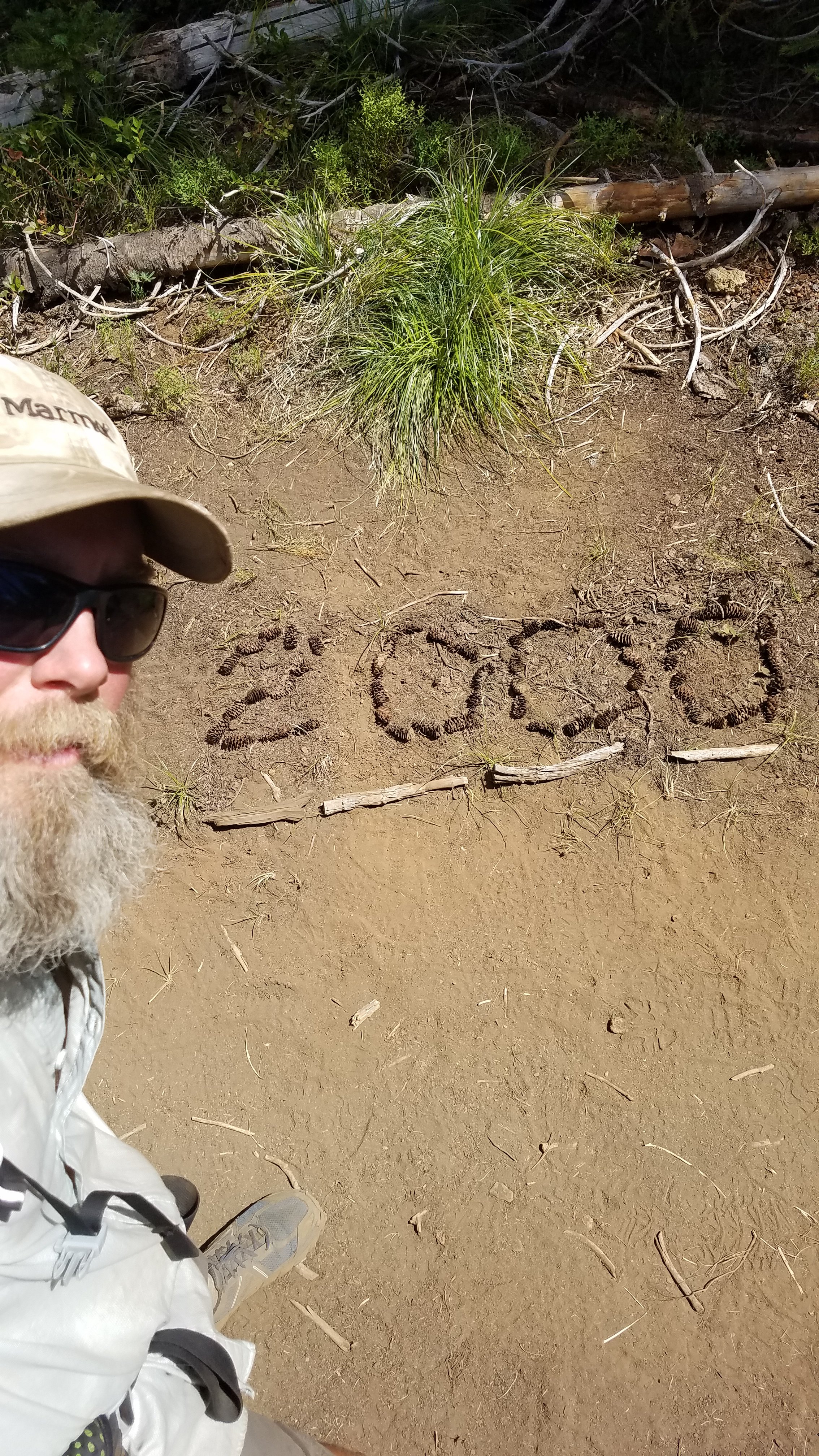 There is a big church youth camp about 5 miles from the highway, where most people stop for a meal or at least water. I powered on through, eager to reach the two thousand mile mark, and the ride that I knew was waiting for me at the highway. Plus the last few miles were a total cakewalk. 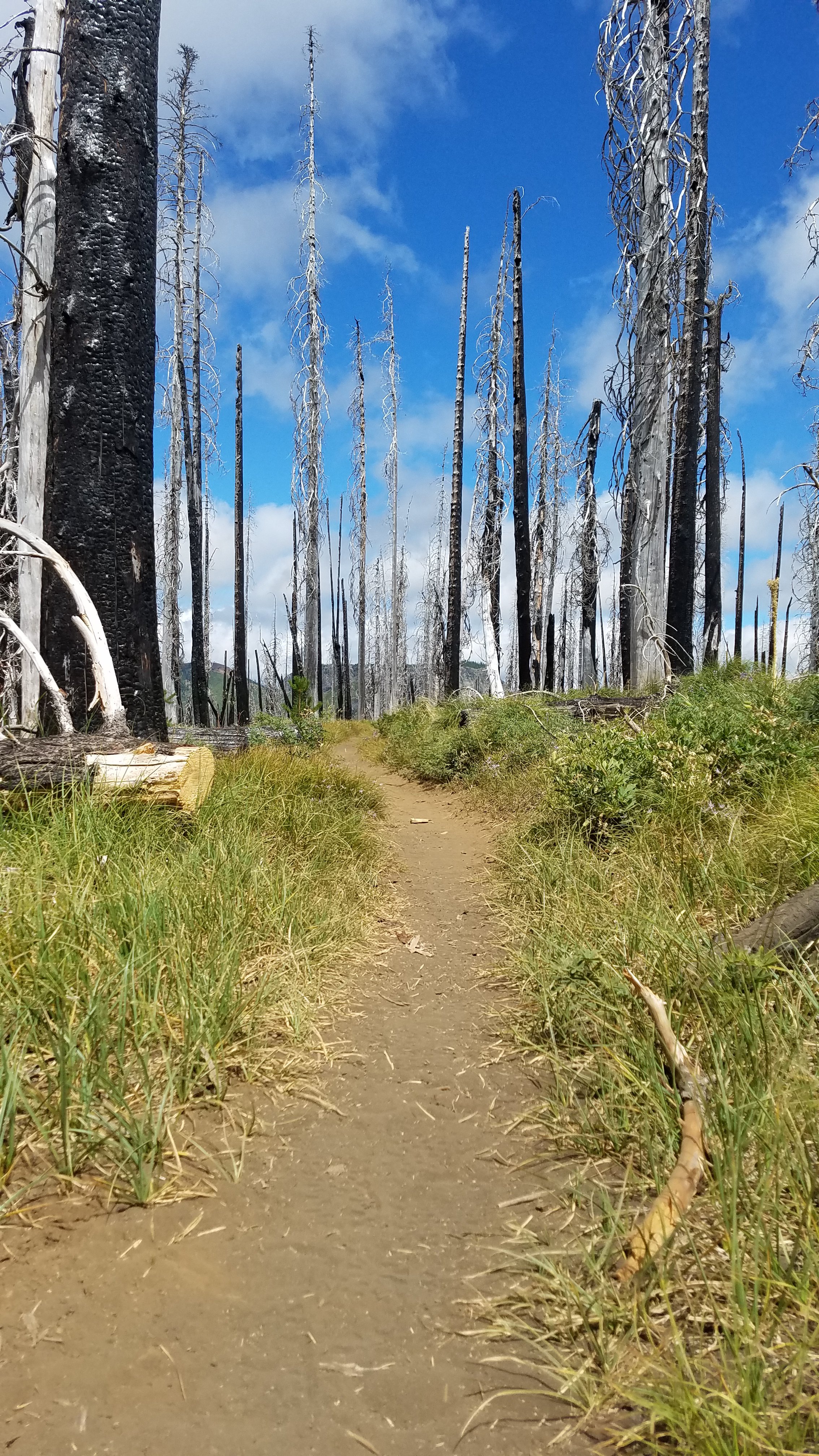 Less than 652 miles to go, basically the distance from Campo to Walker Pass. Which, at the time seemed like an endless trek, but now seems like just a month. It’s close enough to start getting nostalgic and sad about leaving the trail, but it will still be great to be done.