To celebrate the two year anniversary of starting up the PCT I decided to camp out in the backyard. I pitched the tarp that I acquired for the Long Trail hike but pretty much everything else was the old gear including the shoes. Also making an appearance was my Smart Water bottle, the Revelation, the Sawyer filter, and my trusty Exos. 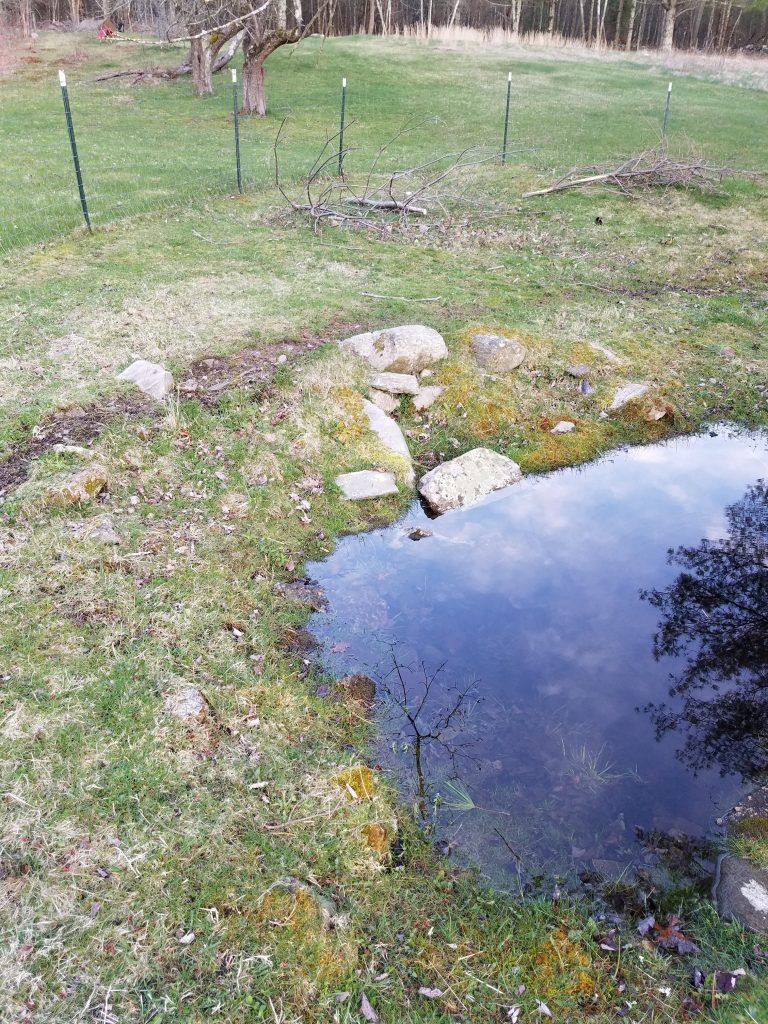 I even filtered water out of the spring that feeds the pond with the Sawyer for old times sake.   It only tasted slightly goaty.

I’m still mastering the tarp. It’s a bit tricky because you have to pitch the whole thing at once so that each part keeps the other in tension. I’m sure experienced backpackers and tarp guys could probably get it up quicker and with a tighter pitch. It will have to do. There’s a chance of rain tonight, so we will see what this thing is made of. There’s a decent chance it will fly away in the wind. Am I a chicken because I brought my house keys in case I need to run inside during the night?

I have a good idea of the animals that live out here, deer, fox, rabbits,turkeys, possum, coyotes, cats, pretty much everything except black bear although there are some of those around a few miles to the north. I’m interested to see if I actually see anything in the field in the early morning or overnight or if my smell will keep them away. Not the usual gross hiker smell of mud but the sad, soapy, clean smell of a town dweller.

It all came back. Bittersweet, all my tricks and rituals came right back. The shoes go on the left side with the headlamp in them, while the water goes on the right side. Pack by the feet and the clothes into the stuff sack for the pillow. It’s tempting to say it’s like I never left but that’s of course a lie.

I have told myself for the past 7 years that I would do this so I am pretty excited that I finally did it. There is something about being outside, unless it’s below zero or you are soaked to the skin, that is always better than being inside. I want to think that I will sleep very well tonight, but I suspect I will be up frequently. It will take the body more than a few hours to get used to laying on the ground. But maybe I can make this into a regular thing.

As usual, I slept through until the soul’s midnight at 3am.  I’ve done some reading on how in pre-industrial times people would wake up in the middle of the night, even do some light activities, then go back to the “second sleep”.   Something about circadian rhythms, artificial light, all that.  It had also begun to rain, a steady light drizzle, with only a bit of wind.  Stayed totally dry under the tarp, so that’s a plus.   A lot of air found its way OUT of my air mattress, so that was a minus.   But, given the relative luxury of being 100 yds from home, I had brought out my trusty ridgerest and was double-stacked on sleeping pads.   Anyone else remember when Ridgerest was the brand?  I ultimately slept through to 8am, waking up with my hat pulled over my eyes, and drool on my stuff-sack-turned-pillow – just like old times.