Digging through some old hiking photos from Hawaii, I was struck how similar the trail is to New England, despite having probably 1/100 of the traffic.   That volcanic soil just can’t take the abuse, similar to the thin layer of soil on top of the mineral soils covering the mountains of the Northeast.  Just like how in alpine zones like Marcy, Washington, Saddleback and Katahdin one step off the trail does irreparable damage, the terrain on relatively ‘new’ land like the Hawaiian islands is fragile.

First you have jackasses like this.   Despite a marked trail, an easy trail that doesn’t need poles, a sign to stay on the trail, these  two decided to take a break off the trail to adjust.   The terrain seems hardly fragile, but it’s the sense of wildness you’re looking to preserve.   If you end up with footbeds all over the lava, then its not a cool dormant crater anymore, its a city park. 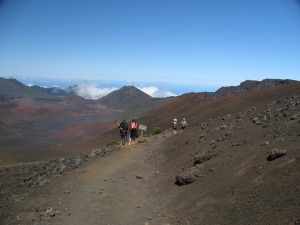 On Kauai, in the Waimea Canyon park, there’s a long trail that runs through jungle then along the coast.    Here you have a hip-deep trail, and a “bonus” trail along the side, probably created by sneaker-wearing hikers in the wet season.   If you #PlanAheadAndPrepare you have the right shoes. 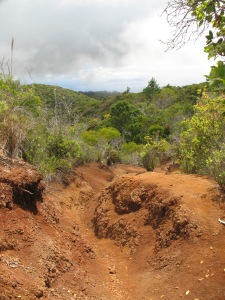 When the trail is eroded like this, you want to stay on it – and you can see the subtle psychological pressure to keep away from the edge; the soil is getting compacted as the trail erodes. 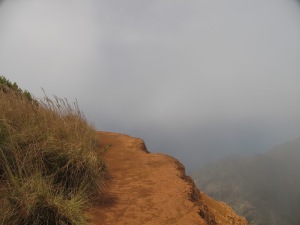 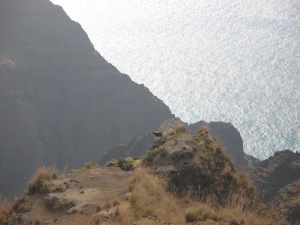 It’s important to leave the land in the condition you’ve found it, as you owe it to the guy behind you.   Let him have his experience, just as you had yours, and perhaps next time, someone will leave something for you.