I spent 5 days in Steamboat Springs with a bad ankle. Because it was a holiday weekend, and a rich ski town, the hotels were close to 300 bucks a night. AND, I had to wait until Tuesday to pick up a package at UPS. So, I crossed the train tracks, found the DPW garage near the riverfront park, with a little scrap of grass behind. Out of sight from everyone except mosquitoes.

I spent the next 5 nights camping there, setting up at dark, and packing up before sunrise. No problem. Then it was off to the Starbucks or public library ( if open ), to binge watch TV on my phone, or read. With free busses along the strip, there was minimal wear and tear on the foot. Public libraries are great when you’re traveling – free wifi, phone and brick charging, bathrooms, clean water, and nobody cares if you sit there all day. Starbucks has it advantages too, although you pay for it if you’re honorable.

I lived mostly on PB&J sandwiches, and I’d swing through the Safeway for dinner, picking up a salad and a beer before retreating to my lair. There was this one other traveler kind of doing the same thing, he showed me where there was a live plug on the outside of the building to charge my phone.  Wifi and power are key.

Rather than vainly attempt to hitch to the trail, I did a 15 mile roadwalk out of town. On paved, then dirt roads, i navigated up to a place called Summit Lake. I bypassed about an equal length of trail, so it kind of cancelled. The ankle felt sore, but not too stabby. I did a few miles on trail after that, rougher terrain and still no real problems. 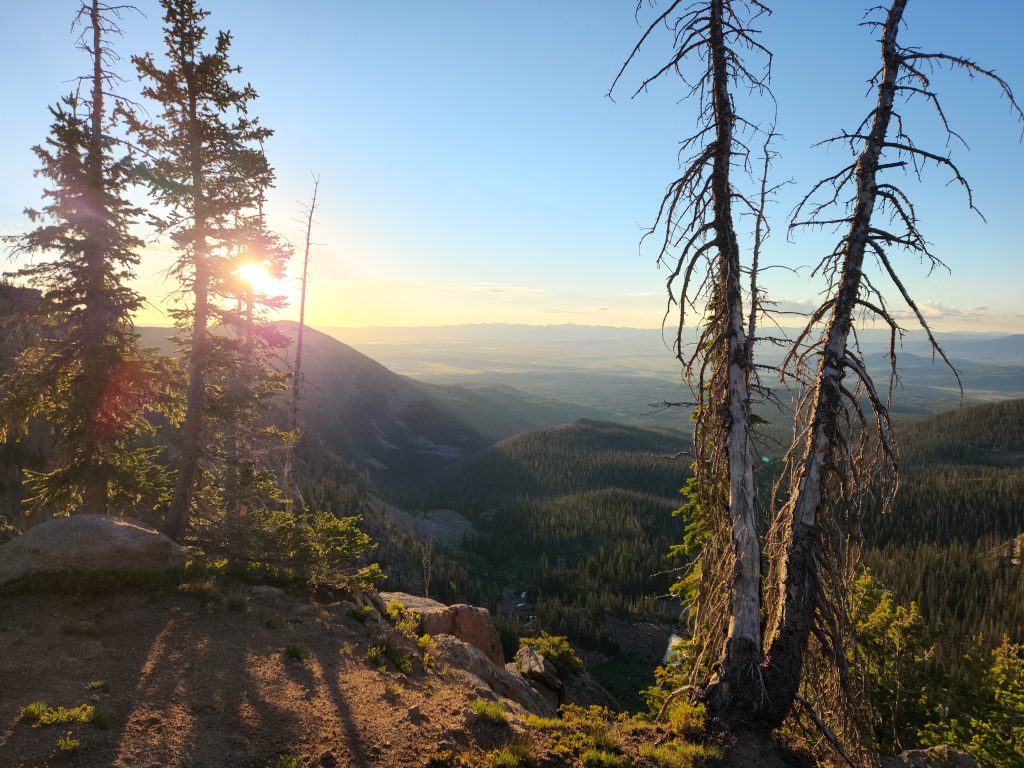 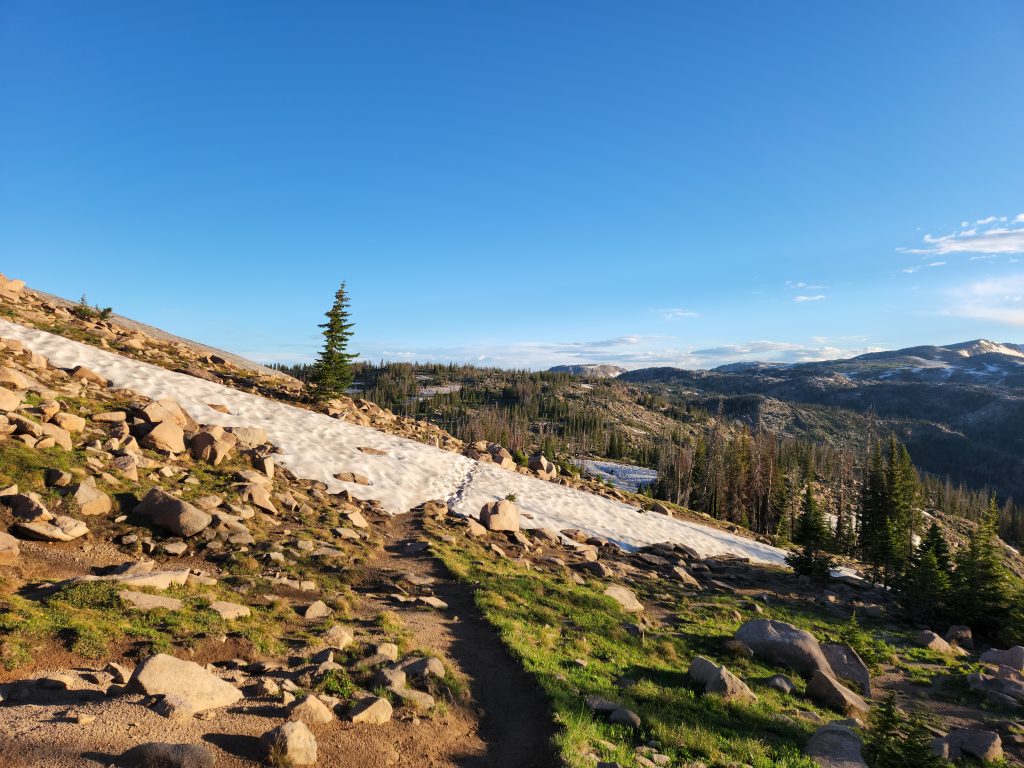 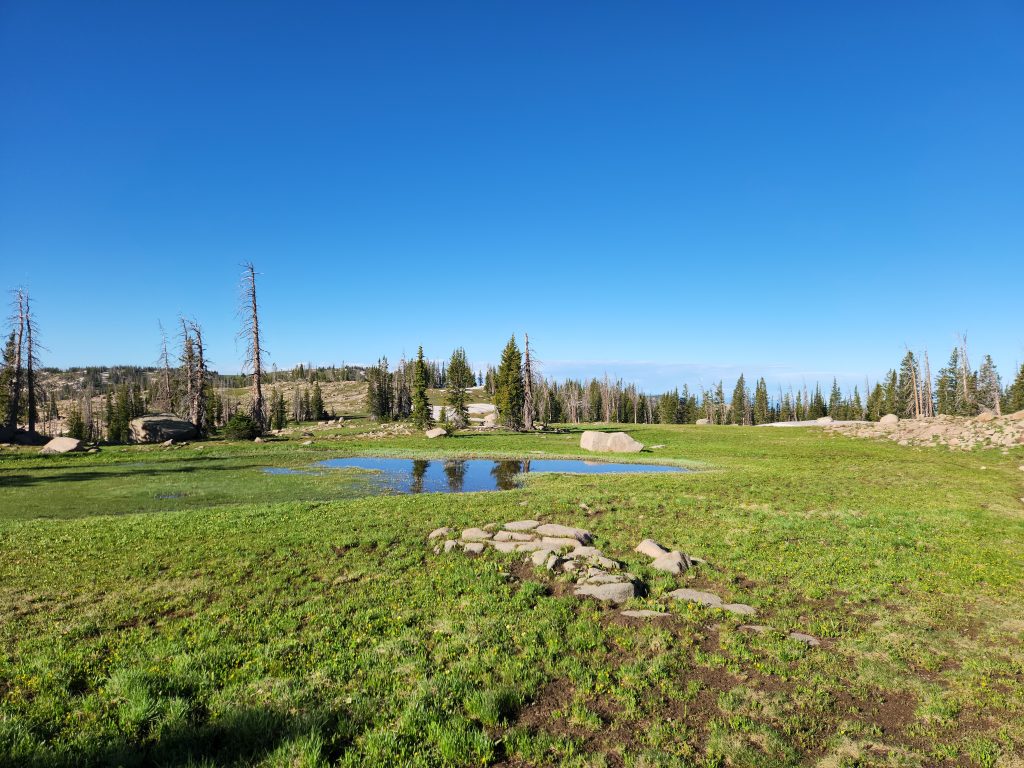 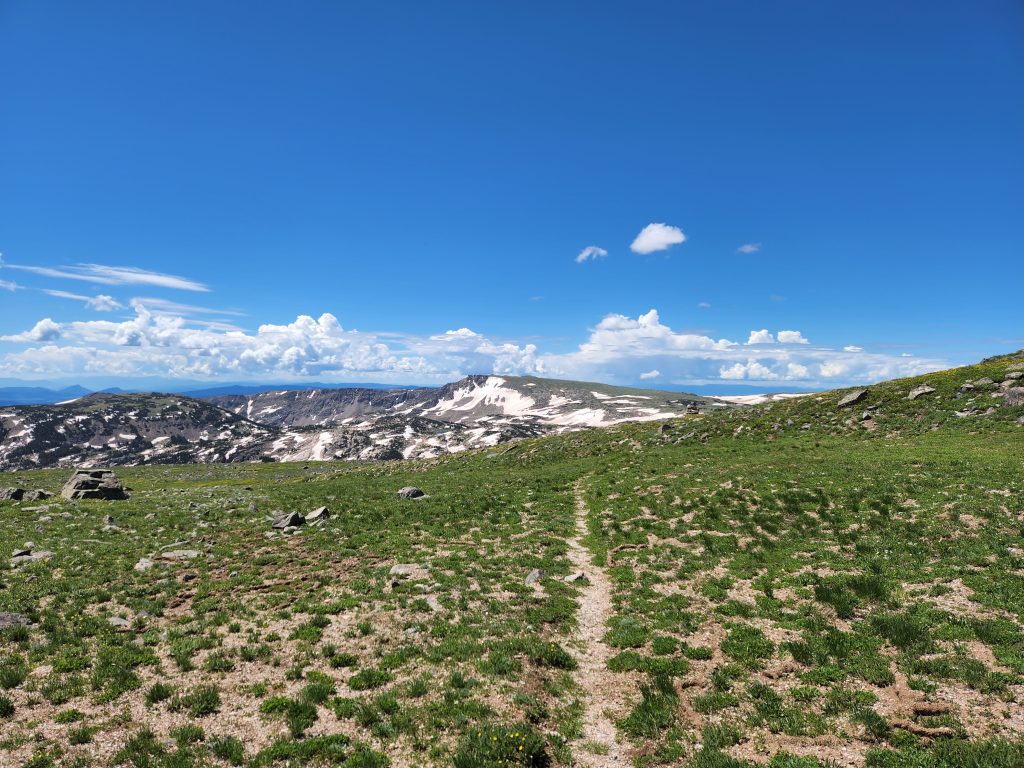 Northern Colorado is definitely different than the rest. Much more rolling, longer, grassier ridges, and wetter.  Lots of grassy meadows which you discover are actually swamps of ankle deep mud. Easier hiking, not any one place in particular, but by the end of the day you do a lot less elevation.

I’m seeing a lot more hikers now. We had a full-fledged gam at this post/trail marker in the Wilderness, I think 7 or 8 people were there taking a break. Saw some people I hadn’t seen since Lake City.

On the way down off the ridge, the trail turned into a series of rough switchbacks. Glorious switchbacks, vs. descending 1000 feet per mile in a bike-tire-ruined ravine. That didn’t prevent me from rolling my ankle again. I screamed so loudly that later, other hikers asked, “I heard a scream coming down those switchbacks, was that you?” “Yep”. The kind of pain that goes all the way up your spring. So that sucked.

I got to the bottom and there was a USFS campground.   Most hikers turn their noses up at the idea for paying to camp, but a flat spot, dumpster, fresh water, and a clean privy seemed worth the 12 bucks.  I even had a bit of a campfire.  Bonus – picnic table to sit at while eating instead of squatting on the ground like a caveman.   Very good night’s sleep. 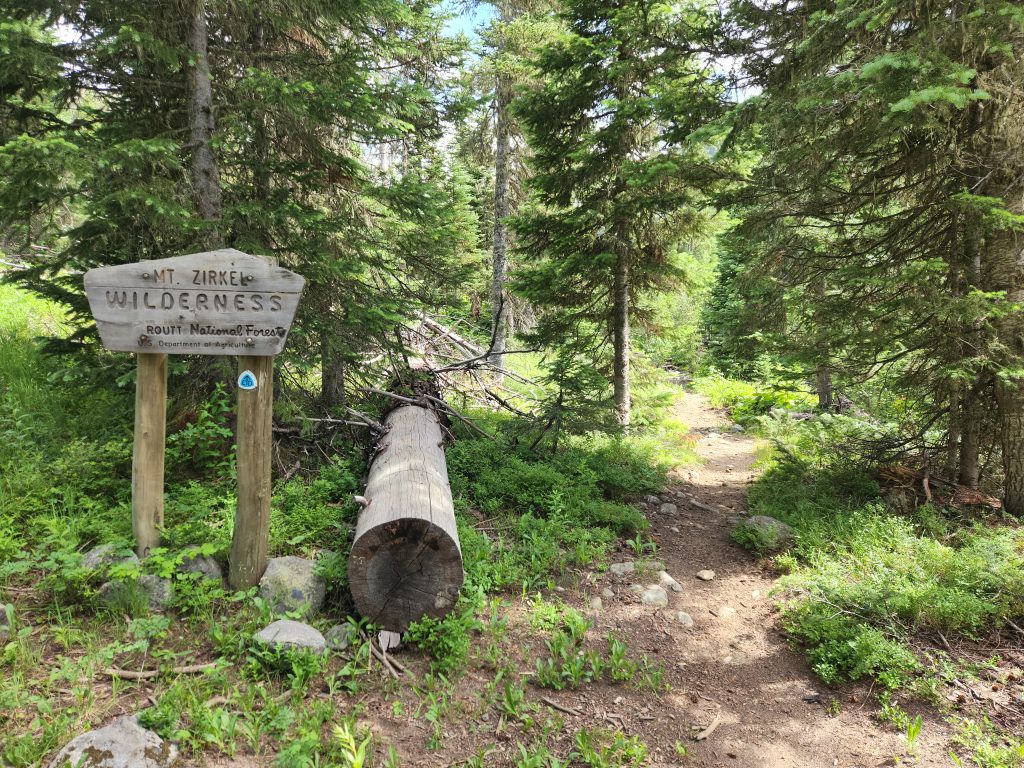 I got up early and decided to walk a forest road that paralleled the trail.   Easier on the ankle, and didn’t cut through a field of hip-high, wet grass.   After about a mile I came across a big white dog, an Akbash I think, guarding a free-roaming horse.   I gave him a wide berth, but he followed me, prowling, ready to rumble.  Slightly intimidating, as was his one deep bark.   The road fizzled out into an old fire area, covered with downed trees.  I bushwhacked my way down the hill through the pickup sticks, and found the trail again just shy of a river.

I filled up my water and stuck my feet in – bad idea.   The water was so cold it was painful after about 5 seconds.   Like, New England ocean water in June kind of painful.   Thus rested and chilled, I pushed on where I met Tops, a woman I had bumped into a few times down in the middle of the state.  We decided to hike together, which was wise, as the trail completely disappeared into more overgrown stuff and blowdowns.   We dead reckoned (and cheated, looking at our phones) for a bit, where we came to a river crossing.   The bridge had been blown away or burned, so we ended up fording.    Not bad, thigh high, but the kind of ford where your trekking poles are vibrating like strings on a giant cello.   And cold.

We hiked slow and steady all day (her style), on what was almost all glorious two track.   There were some steep grindy bits, but for the most part, ATV/truck trail.   SO restful on the feet, and so much easier than having to navigate big rocks and roots.  You could kind of just go into cruise control, and watch the scenery.   That didn’t prevent me from another epic wipeout on the ankle, this time crashing into Tops as I fell forward.   “That’s lunch” we decided. 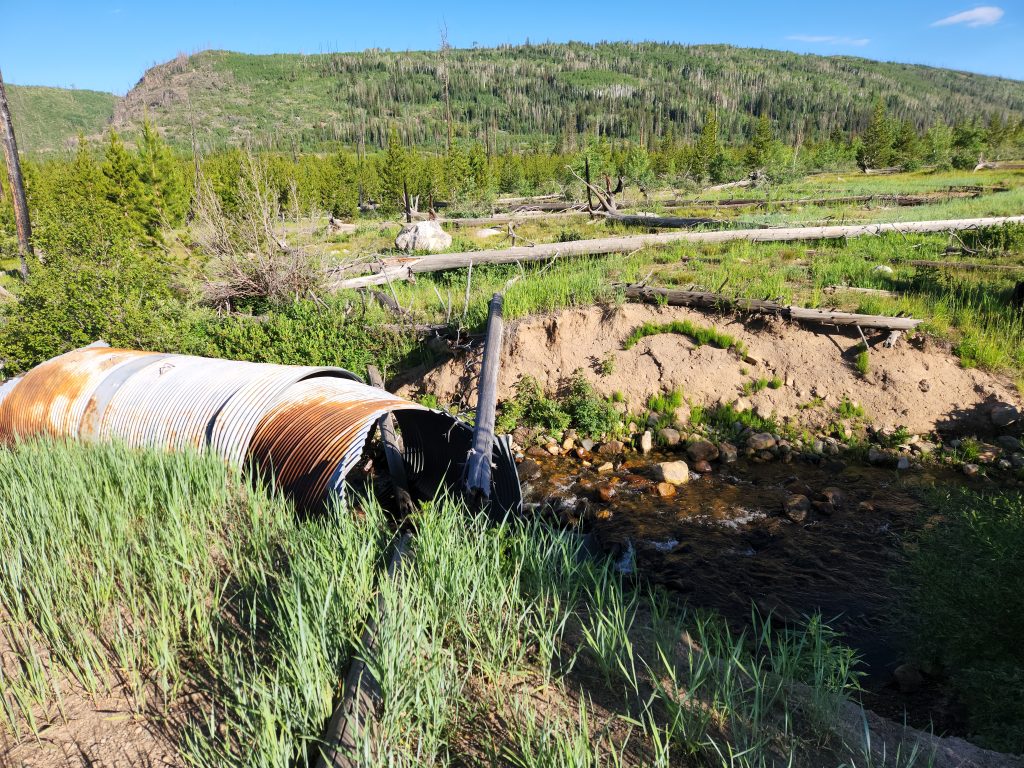 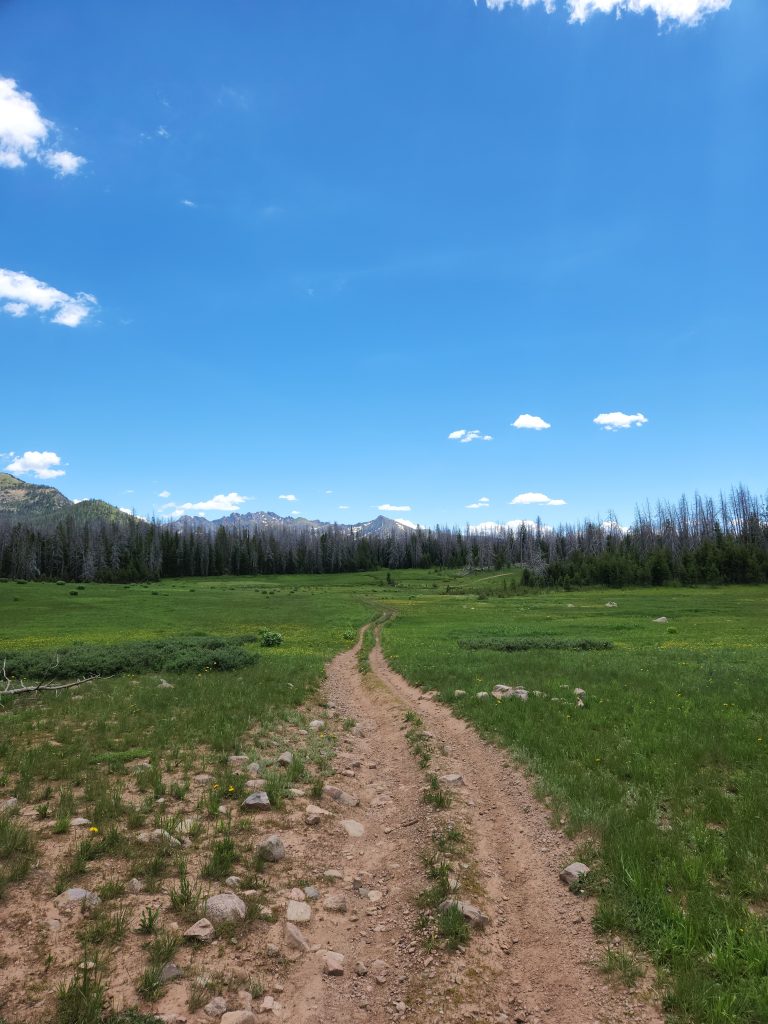 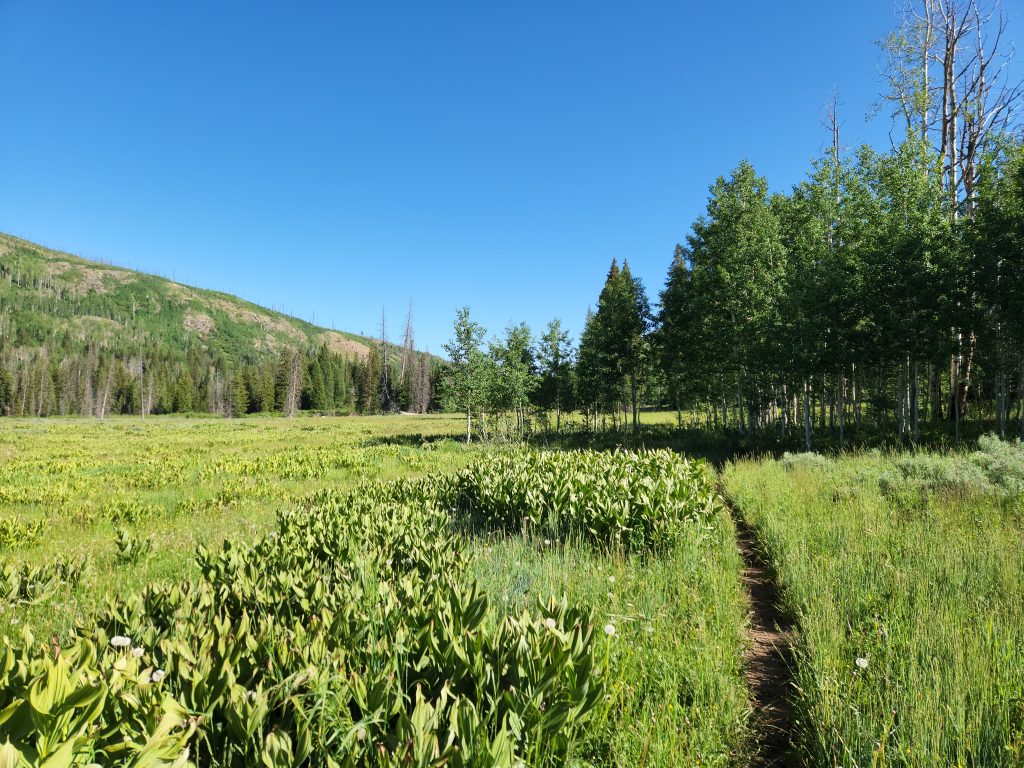 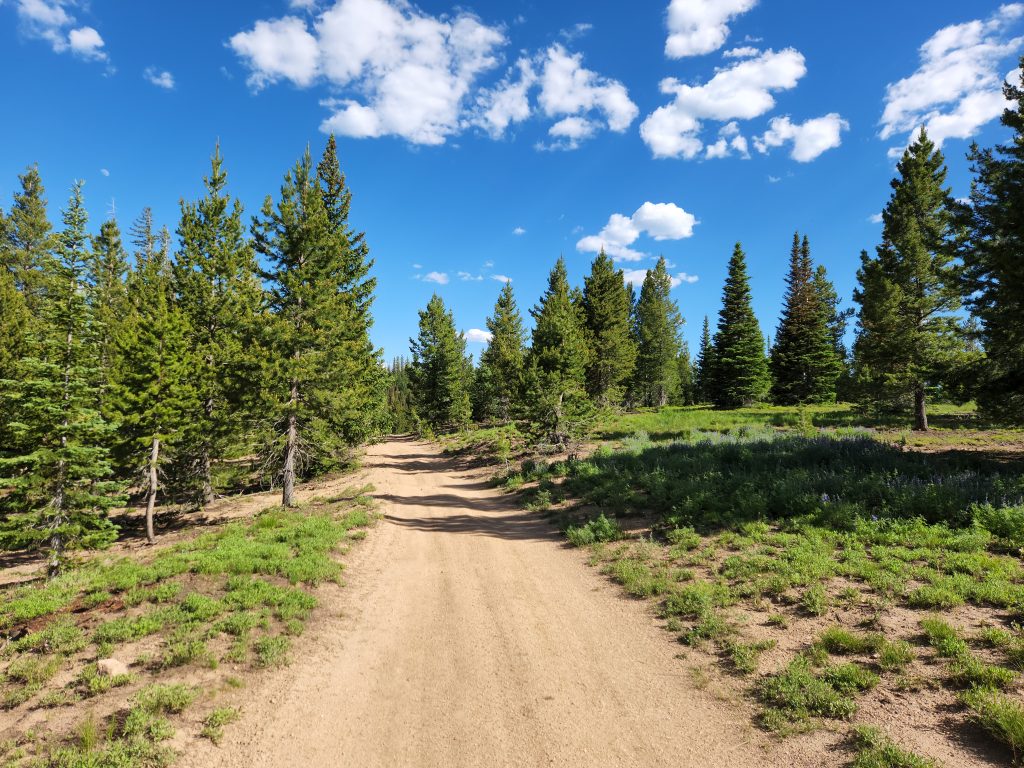 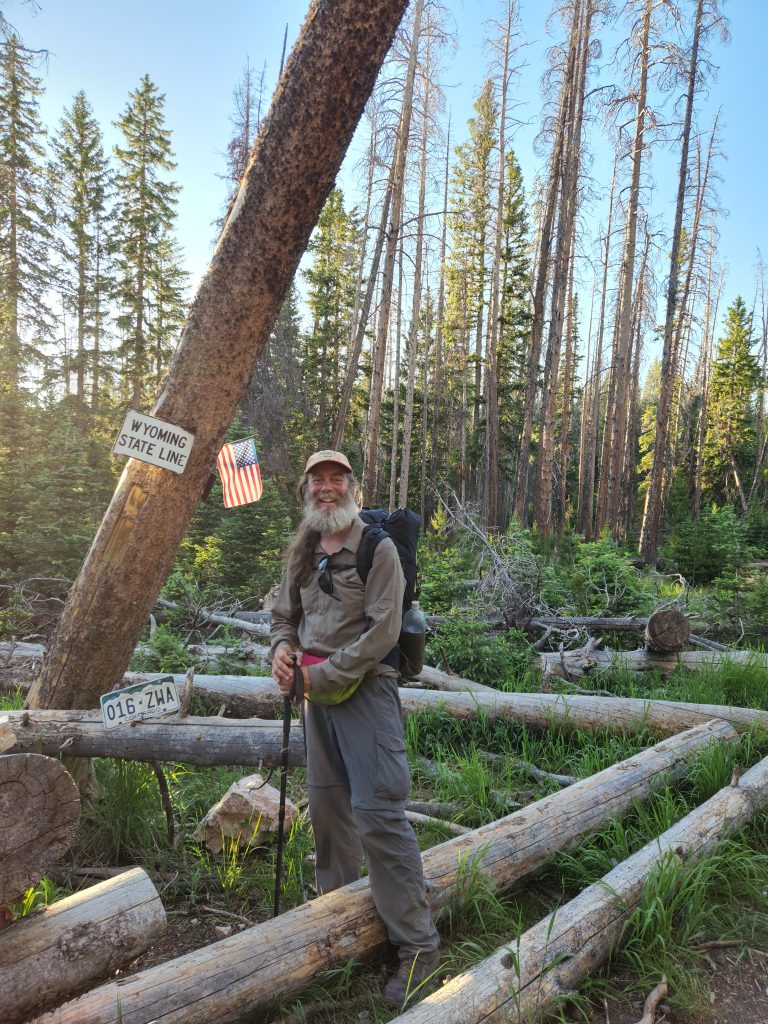 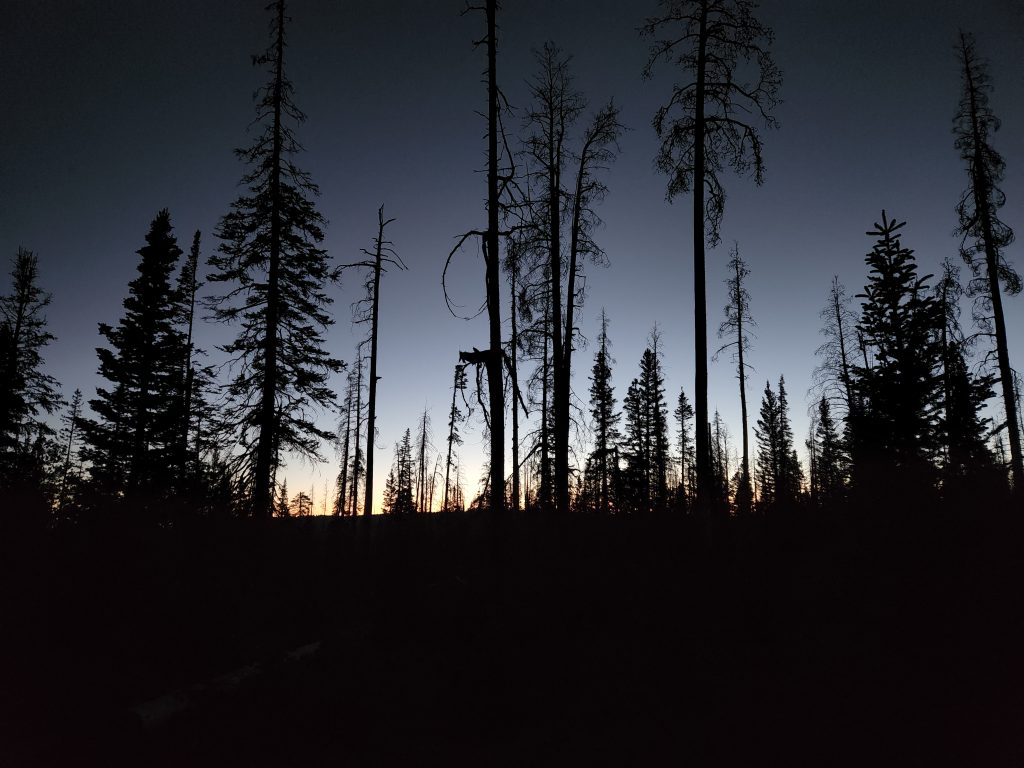 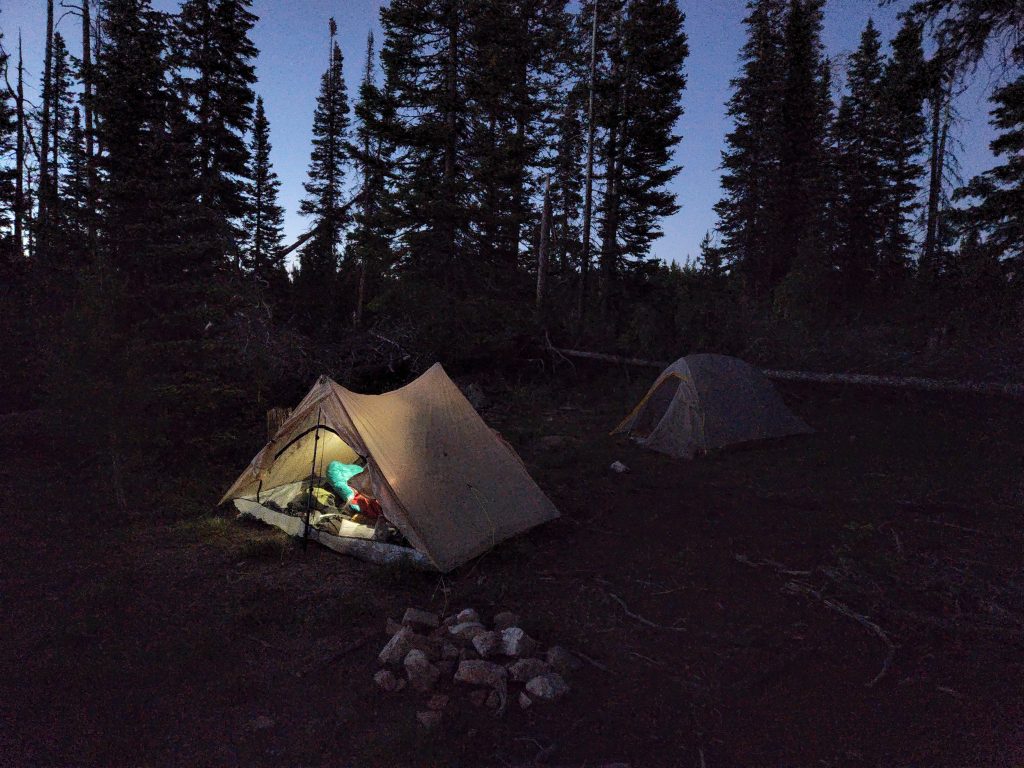 By accident we hit the border around 8pm.   We had been looking for “good camping about 0.2 south”, or so trail rumor said.   Nothing had jumped out as “good camping” so we pushed on and then, oops, there’s the Wyoming sign.    We took a few picks, had an embarrassing, oops, fistbump vs. high five moment, took some pictures, then backtracked a bit for a campsite.   100yds back there was a flattish space, and this was mile 21, so off came the packs and that was it.

Three guys steamed by in the dark under headlamp, and we heard some muted but excited whooping and hollering.   Colorado was a long 800 miles.   I was trying to think of a witty quote about it, but the best thing was something I read on the hiking app – “Smell ya later, Colorado.”   Almost everyone I’ve talked to is DONE with the state, elevation, grindy climbs, swamps, expensive towns, and 800 miles of gorgeous but ultimately the same terrain.   Excitement is high for WY and the Great Basin – a deserty flat section.   “Wyoming is flat” people say, which is of course, a lie.

The next day was rougher, despite being slightly shorter.   The climbs were steeper and rougher, and the meadows much longer, muddier, and more mosquito infested.   Mosquitoes are a thing here.   A horrible, maddening thing.   We stopped for breaks where we could, but there was one in particular where after sitting for 10 seconds, I said “nope, Im out of here” and moved on.   Even sitting in your raingear, they’re all over you, biting, swarming, sometimes flying in your mouth.   Uncool. 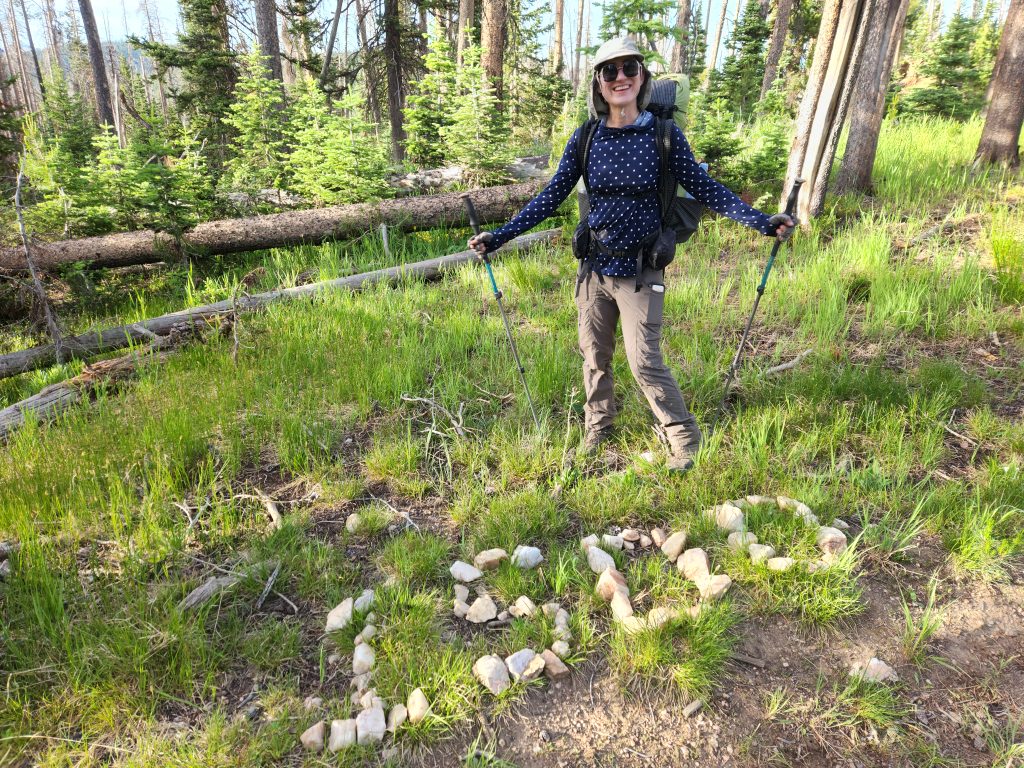 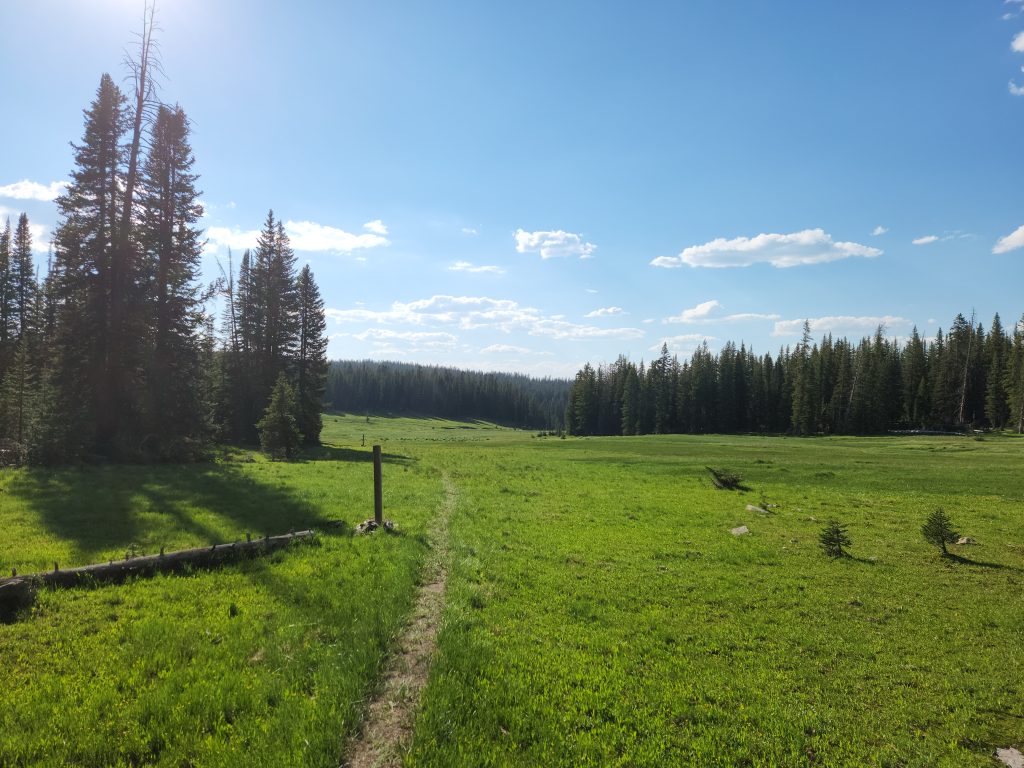 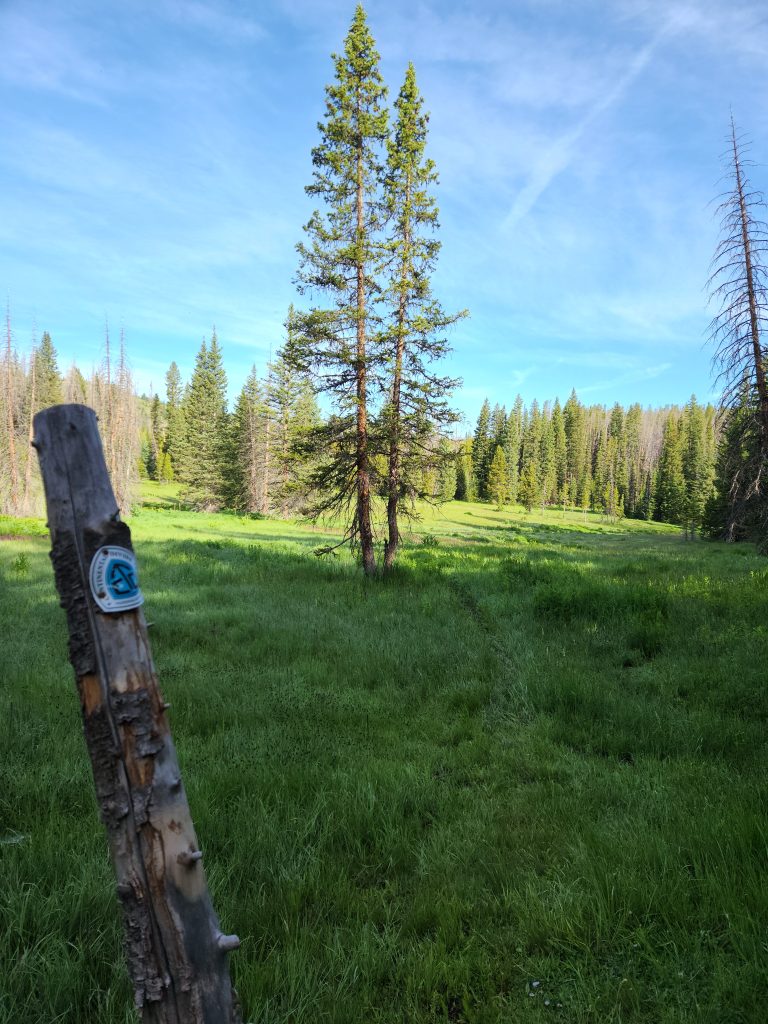 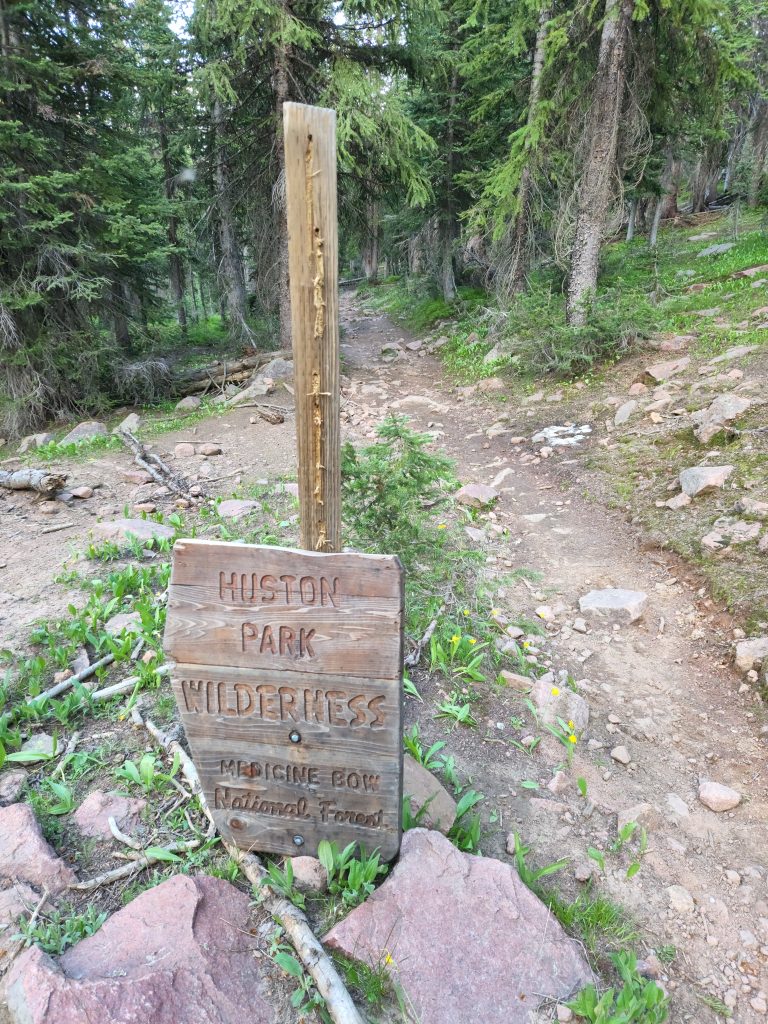 AND, the zipper on my tent is starting to fail.   It does that thing where you zip it, and then that bit you just zipped kind of peels open.   Like a cheap ziplock bag.   I’m not sure how to fix, and I can’t exactly send it off for repairs and sleep outside.   Duct tape might be the order of the day.

I’m super disappointed in Big Agnes, the manufacturer of my tent.   They’re unreachable via phone, and their online support system sucks.   I STILL have a broken tent pole that I can’t get fixed.   And their headquarters and factory is IN Steamboat Springs!   Despite me telling them I’d be IN TOWN, no response, no new tent pole.    Very frustrating.

We hiked about 20 miles, reaching a private property boundary about 0.5 miles from highway 70 and Encampment, WY.   The plan was to camp, get up and get to the road pronto, then get into town. 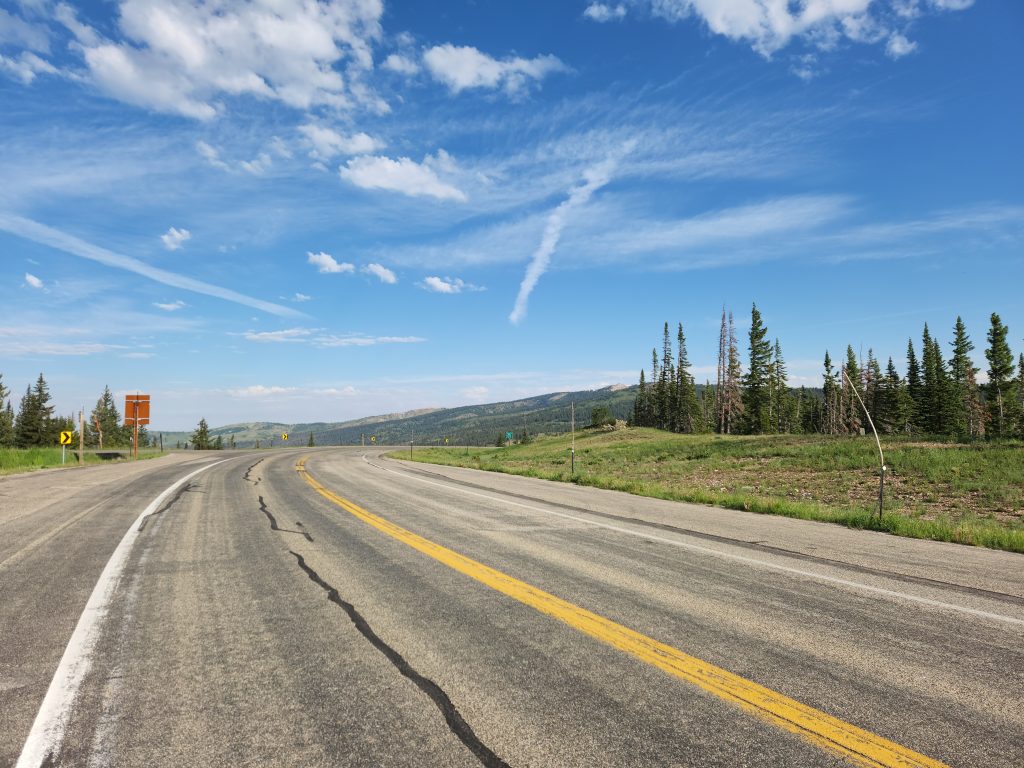 The problem with that plan is that we got to the road at 7am.   On a Sunday.   In the middle of nowhere.  On a road connecting Nowhere, WY to Basically Nowhere, WY.   So there was no traffic.   We waited about 90 minutes, during which 6 cars total passed.   Tops made a few calls on her phone to see if someone could come get us, no dice.   But, she did grab us a cabin at the Riverside Garage / Store / Cabins.   Riverside is about a mile from Encampment, they kind of flow into each other.   If Encampment has 452 people in it, Riverside must have about 200.

Eventually we got into town, and sodas were the order of the morning.   Then some beers, then a shower.    I did our laundry at the RV park, where there were about 20 other hikers staying.   The laundry was out of soap.   I think these towns are so small, when we show up its like a plague of locusts.   Later when I went across the street to the “Mangy Moose” cafe for pizza, they informed me that they had run out pizza sauce.   How does that happen?

Had an interesting chat with a local rancher while watching, of all things, a Red Sox game.  I asked him about bears.  Rancher: “When it’s calving season they just stick around. I’ve gotten rid of a few bears, I just bury them with the backhoe. I mean, what am I supposed to do?”  He was also adamant, as has everyone been, that reintroducing wolves is a dumb/bad idea.   He claims they’ve been here all along, he’s seem them.

From here its 82 miles to Rawlins.   Some hikers will do that in 3 days; I will do it in 4.   Whether or not I leave today is still up in the air.   The RV park has good camping, and sits on a river where I’m told the water is just right.   I have a bunch of extra food from my resupply box combined with some treats from home, so I might rest the ankle one more day.