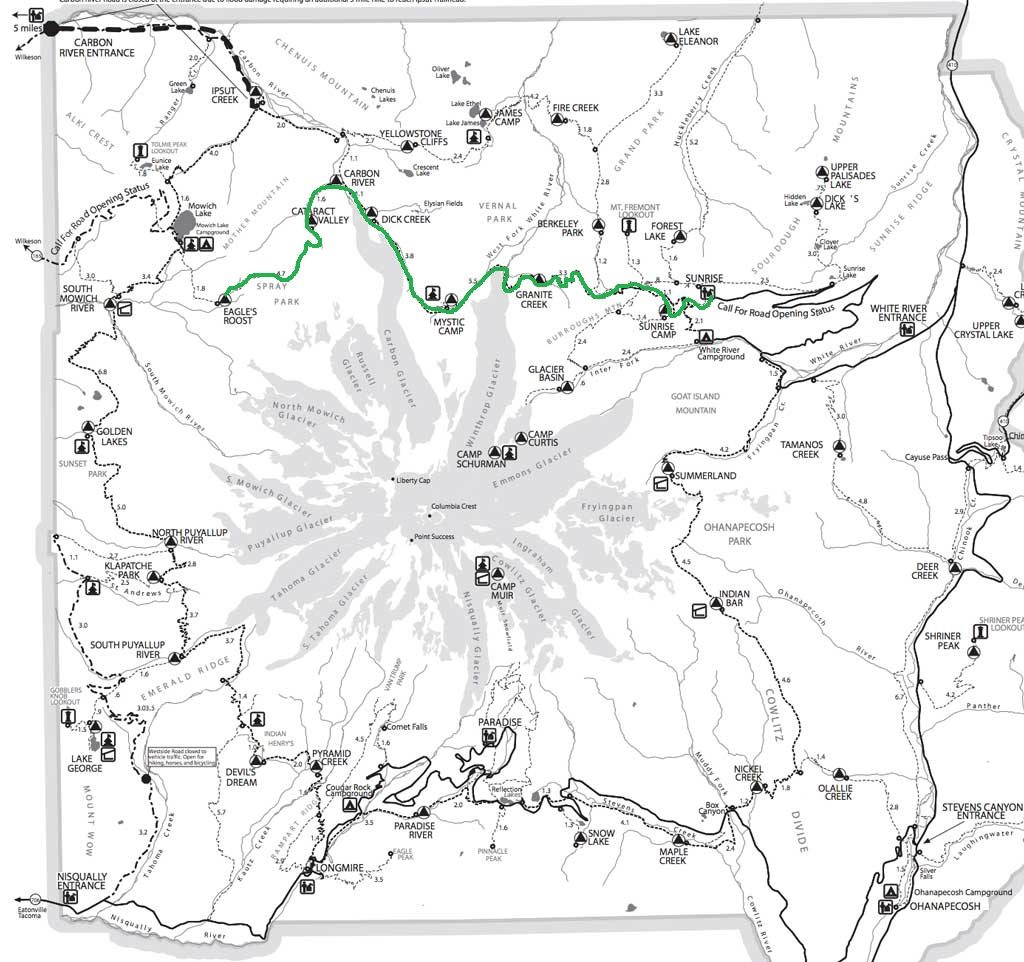 Mystic was another camp that felt high, like I was going to start off level and work my way downwards.    While not entirely true, it was good to start with that mindset.   The trail wrapped around the lake, and after a bit of a climb through a still-shaded valley, I came to the height of land before starting down the Carbon Glacier.   First I had to deal with this fellow alongside the trail, but after a few “hey bear, git!” calls, he walked off. 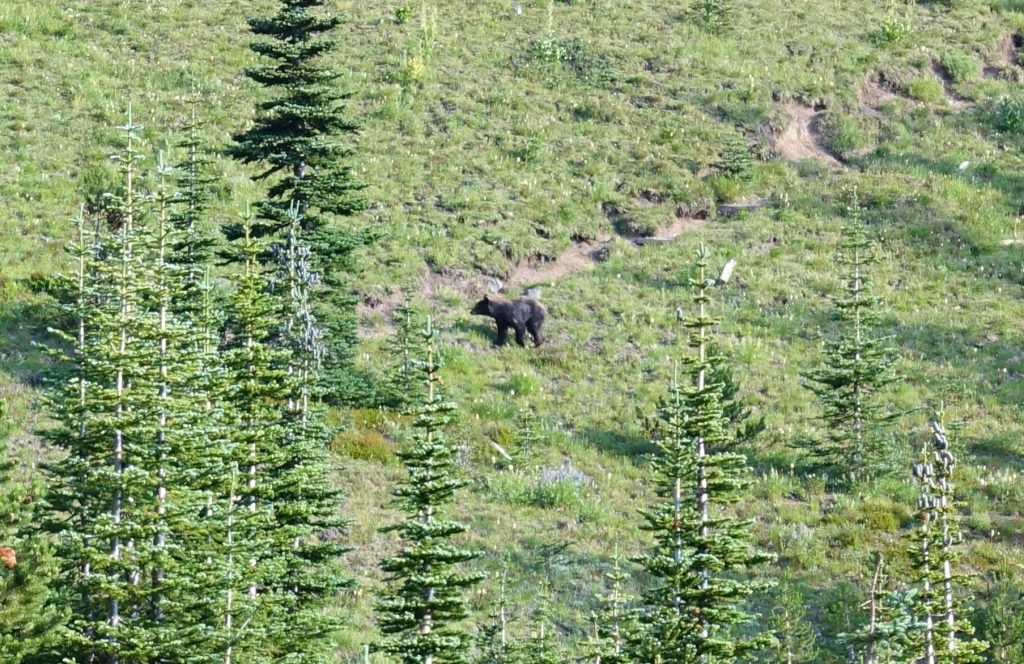 The trail widened out and there’s evidence of a lot of comings and goings.   A herd path lead me about 50 yds away to a small pond.   I sat for a bit, because why not.   As far off and monolithic as the mountain seemed, it was constantly moving, I could hear the ice groaning, and every few minutes you’d first see, then hear a rockslide.   In one case there must have been some pretty big stuff sliding down, there was quite the dust cloud, and I could see big splashes of white fountain up where the boulders hit the ice.    After absorbing all this for a bit, I moved on. 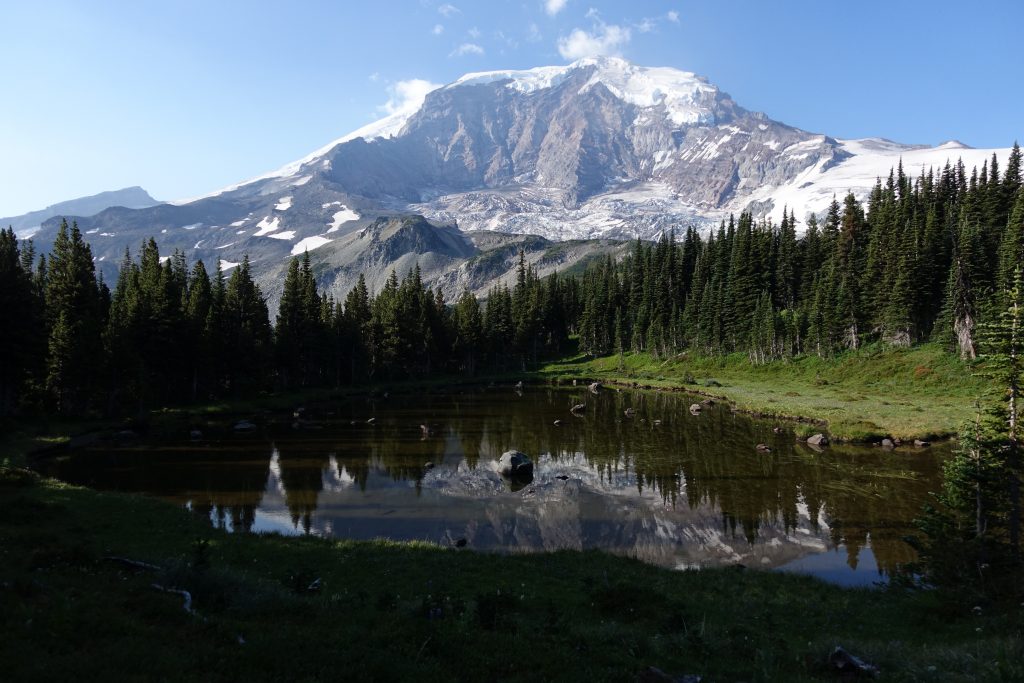 The trail slabbed down the side of the valley, nearly a straight shot, with few switchbacks.   After a while I came to Dick Creek camp, and had a bit of a wash, and soaked my hair and shirt against the heat.   It was there I started to see my first day hiker/runner people, I think coming up from the Carbon River entrance, I guess exiting at Sunrise.   Or maybe they were going to Mystic Lake and back.   Either way, they moved quickly with their tiny packs. 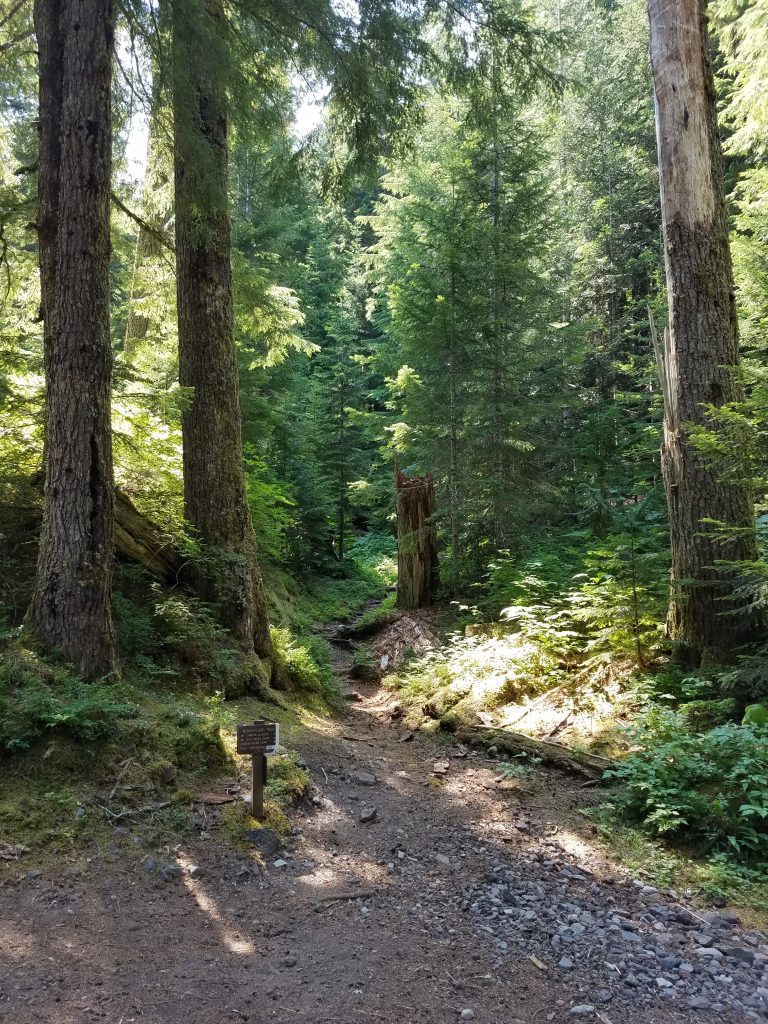 Crossing the Carbon River was pretty cool, another big suspension bridge.   It was pretty solid, with only a few sketchy boards on the bottom.    But it’s a bit long – you feel like you’re on the bridge forever, and once you’re in the middle, it starts to sway a bit too much.   But I made it across just around noon, and had a nice break in the shade.    I took my time, coming up was the grind to Cataract Valley Camp, and then up and over Spray Park.  What I quickly found was that on this alternate trail, it didn’t get as much love as the main Wonderland, so the footbed deteriorated. 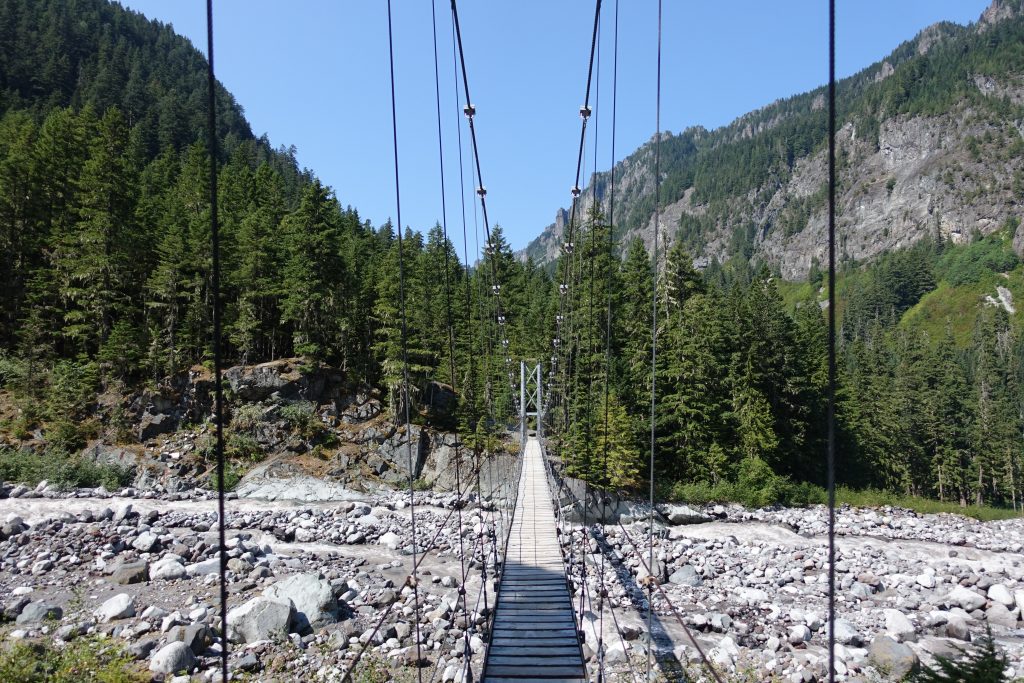 After too many hours in full sun, and another brutal climb on lava rocks, I started to level off in Spray Park.   This was the one day I hated hiking and wished I hadn’t come.   Steep, hot, bad trail, lava rocks.  The snowfields felt like the final insult, climbing up the slush at midday was like walking up a sand dune; 2 steps forward, 1 step back.     But I soldiered on.   I had to admit, it was pretty gorgeous up there. 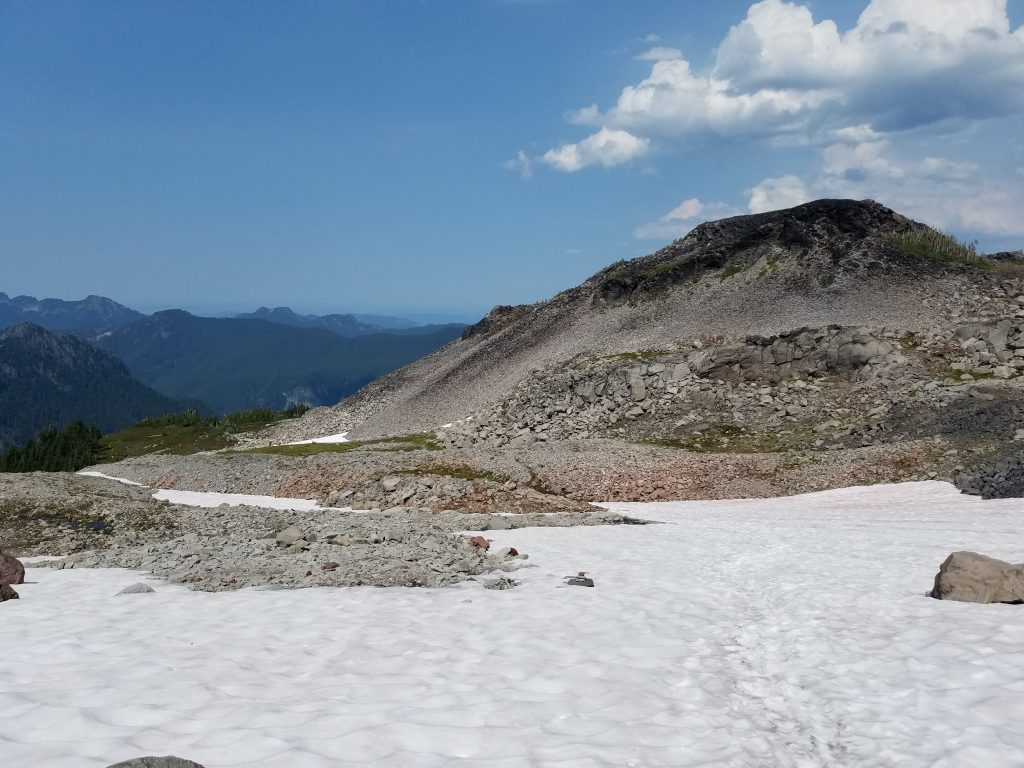 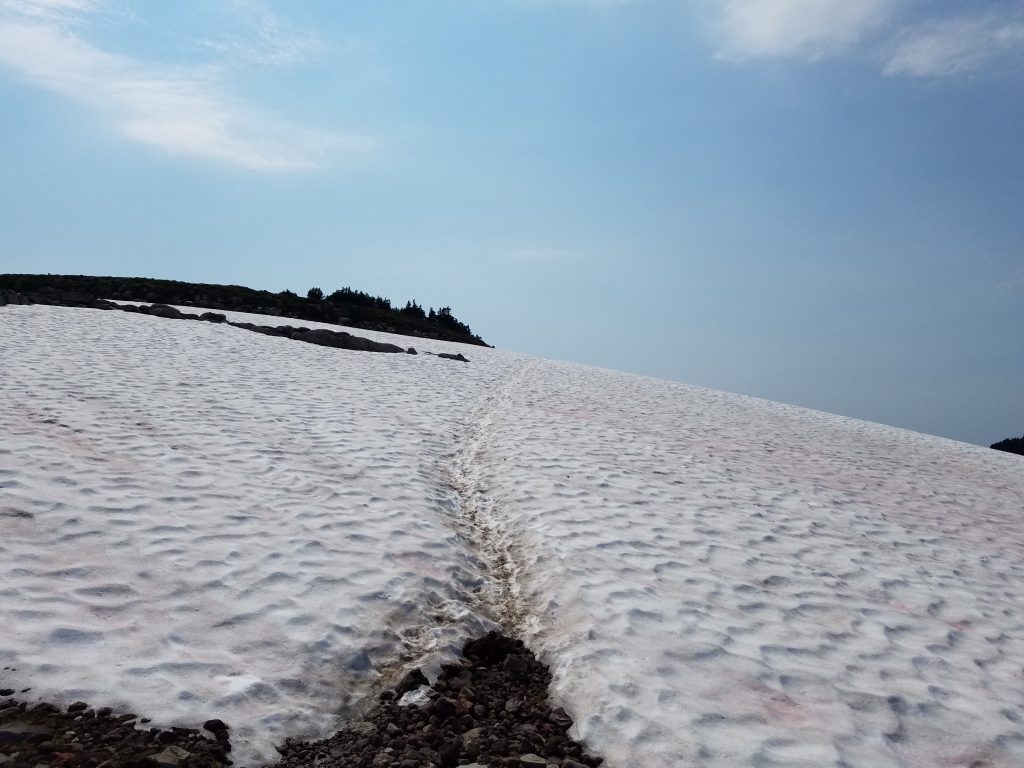 Once I started heading back down, everything levelled off and widened into a big “park”.   The National Park is full of these areas called “parks”, where things are flatter and wetter, and you get these big wildflower meadows.   The sky started to haze up again, due to the smoke of the distant wildfires.   The lupines were everywhere, filling the air with what I think of as fake grape soda smell, and all the other flowers were in full bloom as well. 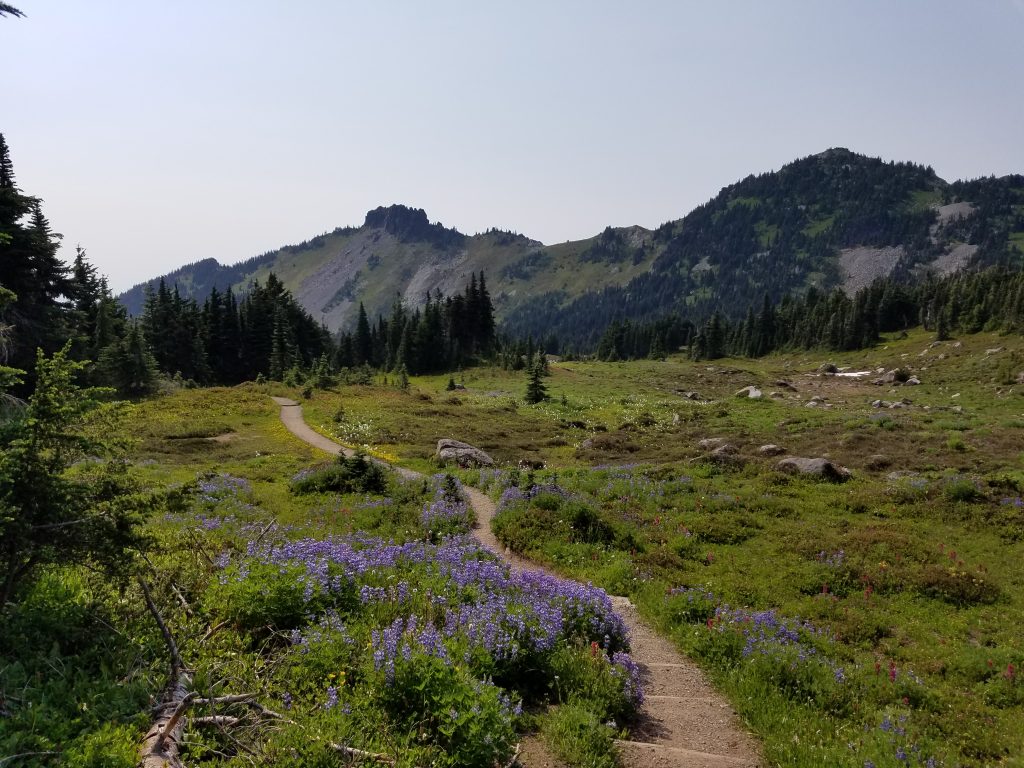 Late afternoon I ducked off the main trail down a herd path for a snack.   I had about 2 miles to go by dark, and it was only 4pm, why not take a break?    Nice little pond, a bit mucky for swimming, but it was great just to sit in the shade, look at the mountain, collect my thoughts, and wait… what’s that splashing in the water? 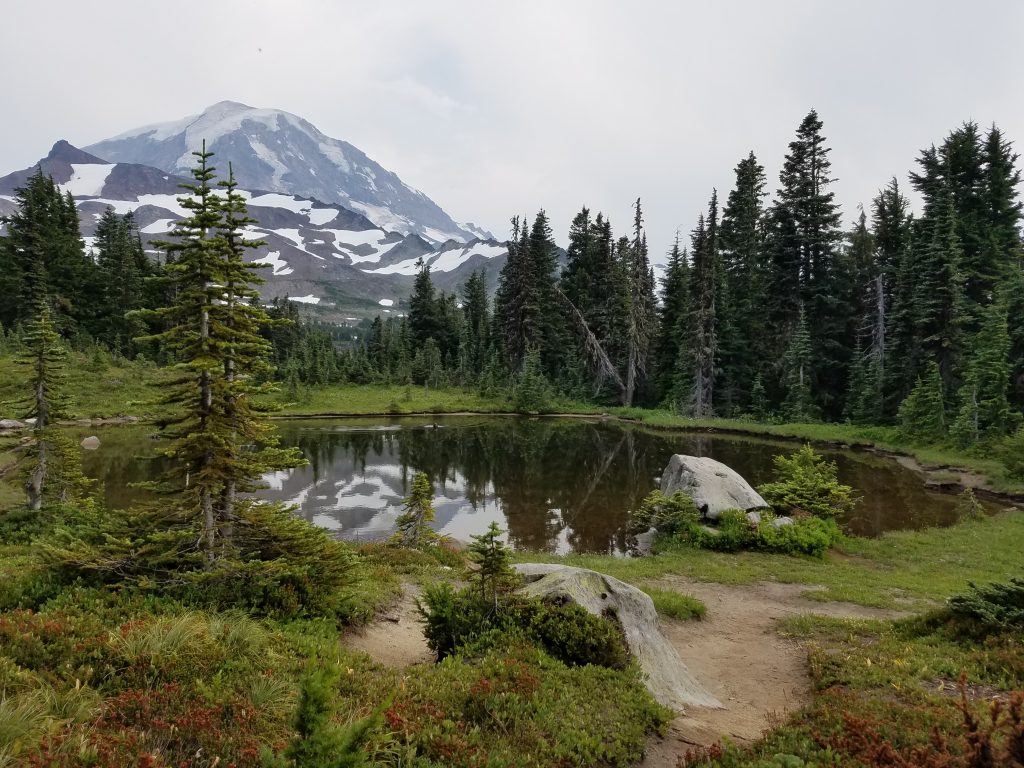 Well hello Mr. Second Bear of the Day.   You must be hot too, if you’re taking a dip.   I called out to him, no change.  Once I stood up he swam away from me sauntered off.   Not a care in the world. 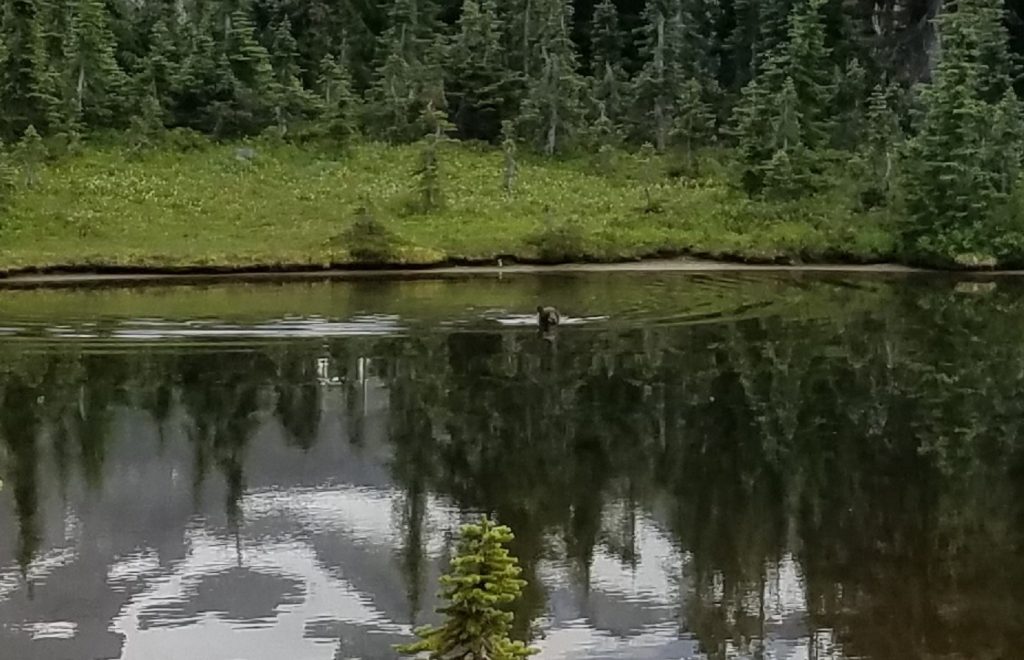 By dinner time, I got to Spray Falls, a huge single cascade of 354 feet.   The air was 20 degrees cooler in the little valley.   I had another wash, rinsed out my shirt again, and ate dinner.    I never felt guilty about rinsing clothes in natural water because I had no soap, bug spray, or sunscreen on my body.   Surely dirty people have washed in streams since the beginning of time?

There were a bunch of people there, since this is only a few easy miles from the Mowich Lake entrance.   After striking up a conversation with one of them, they offered me chocolate, and anything else I might need.  Did I need TP?   Wipes?   When I confessed that I wished I had more power, because my camera was thirstier than I anticipated, they gave me their spare power brick!    A first class “yogi” – and I wasn’t even trying.    Which is what made it first class of course. 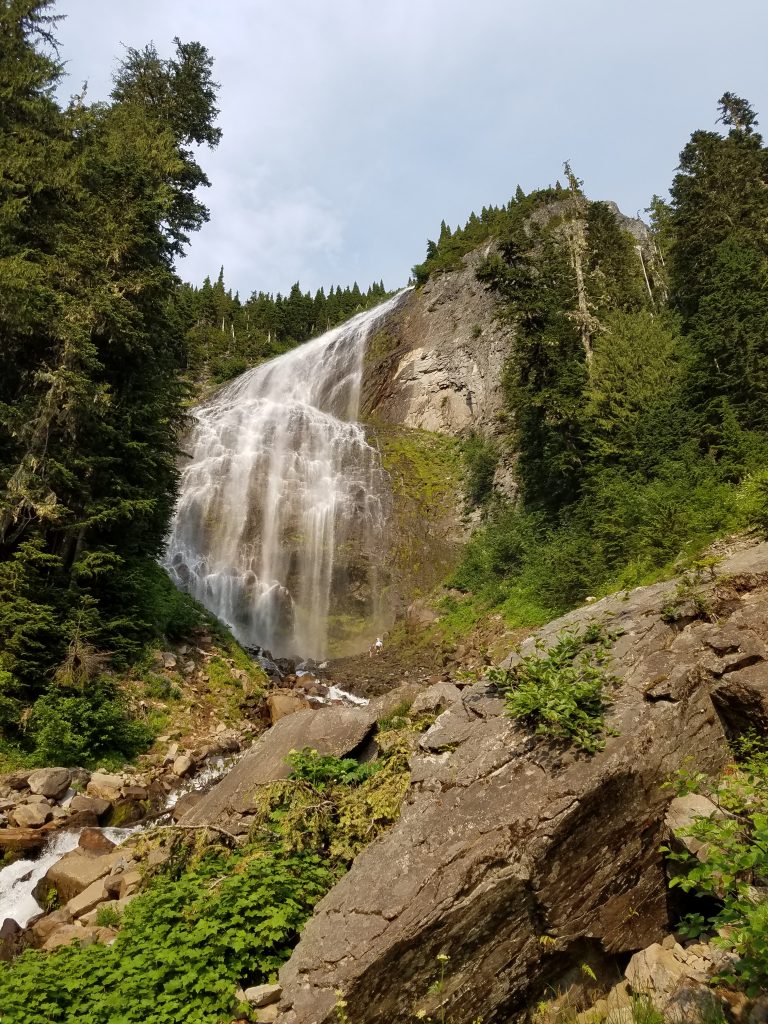 At dusk I finally had the fortitude to get up and hike down to the campsite, where it immediately felt hotter.    The sky got weird and cloudy so I threw up the tarp, probably the worst pitch I’ve ever done.   But I hoped it would keep sprinkles off.  Eagle’s Roost had the worst thunderbox I’ve ever experienced.   I learned the trick of throwing small pieces of stick in to flush the flies before getting down to business.   Otherwise you’d be sitting in a swarm, both above and below you, of angry flies.

Another dusk-til-dawn sleep, and I’d be off to Mowich Lake Campground to dump trash, use a real toilet, and maybe recharge my power brick at the ranger station.   But mostly use a real toilet.