This final chapter of Book Three will be pretty short. From Kennedy Meadows North to South Lake Tahoe is only 78 miles.

How am I doing?

I have been better. Pushing big days is taking its toll, both physically and mentally. The feet are reblistering after my daily Sierra foot soak. I think I’m also getting some plantar fasciitis. My shoes and insoles are shot. 1000 miles in, I worry now about heel spurs and more tendonitis. Now that it’s getting warmer and the trail is going down to lower elevations, sweat is an issue again. Salt, it’s jagged crystals and where they form, must now be managed. If you’ve ever seen a dog limping on a sidewalk in winter because of salt, it’s like that. Except in your underpants area.

Mentally I’m getting fried. I’m tired of being tired, yet still not really accomplishing anything milestone-worthy. Getting pretty tired of one of three possible dinners every night. Getting a little bored with Clif builders bars. I’m not at the point like Scooch with Pro Bars, where they taste “like butt”, but they’re beginning to lose their charm. Sick to death of fruit punch flavored Gatorade, and there’s really only one other flavor. Tired of being filthy, and knowing that there’s no point in getting clean because in 10 minutes you’ll just be dirty again. I am going through baby wipes each night at an alarming rate.

And bummed out that I’m not getting any faster. People are whizzing by me, and I’m starting to hear the tick tock of September and its rainstorms in Washington. I’m still shuffling along, wheezing up the hills, limping on my sore feet as I go down. There’s also lots of hikers that I meet and then never see again. I’m kind of between groups right now, and not that it’s lonely, but if you meet someone and they’re cool, you want to spend more time with them. I enjoy hiking and camping alone, but would like to have more than one conversation with my fellow hikers.

Still, I’m taking time to smell the flowers, literally. Wild mint and sage everywhere. Sometimes the ground alongside the trail is covered with these little white and purple flowers; when the wind shifts its like opening a jar of good honey. Not like fake sweet honeysuckle, but that real fresh flower smell.

A day in the life

Not that it’s all terrible. I was going to go through an average thru hiker day, listing out all the pains and troubles, but it seems a little tacky, given that people have real problems. It’s basically like commuting to work, except you replace the emotional pain of your real world job with the physical pain of your trail job. For me doing 20 miles or more per day means getting up at 5, hiking by 6, and finishing up sometime around 7 p.m. That’s with reasonable but minimal breaks throughout the day. It works out to about two miles per hour, factoring in water and bathroom breaks, chatting with other hikers, and snack breaks. 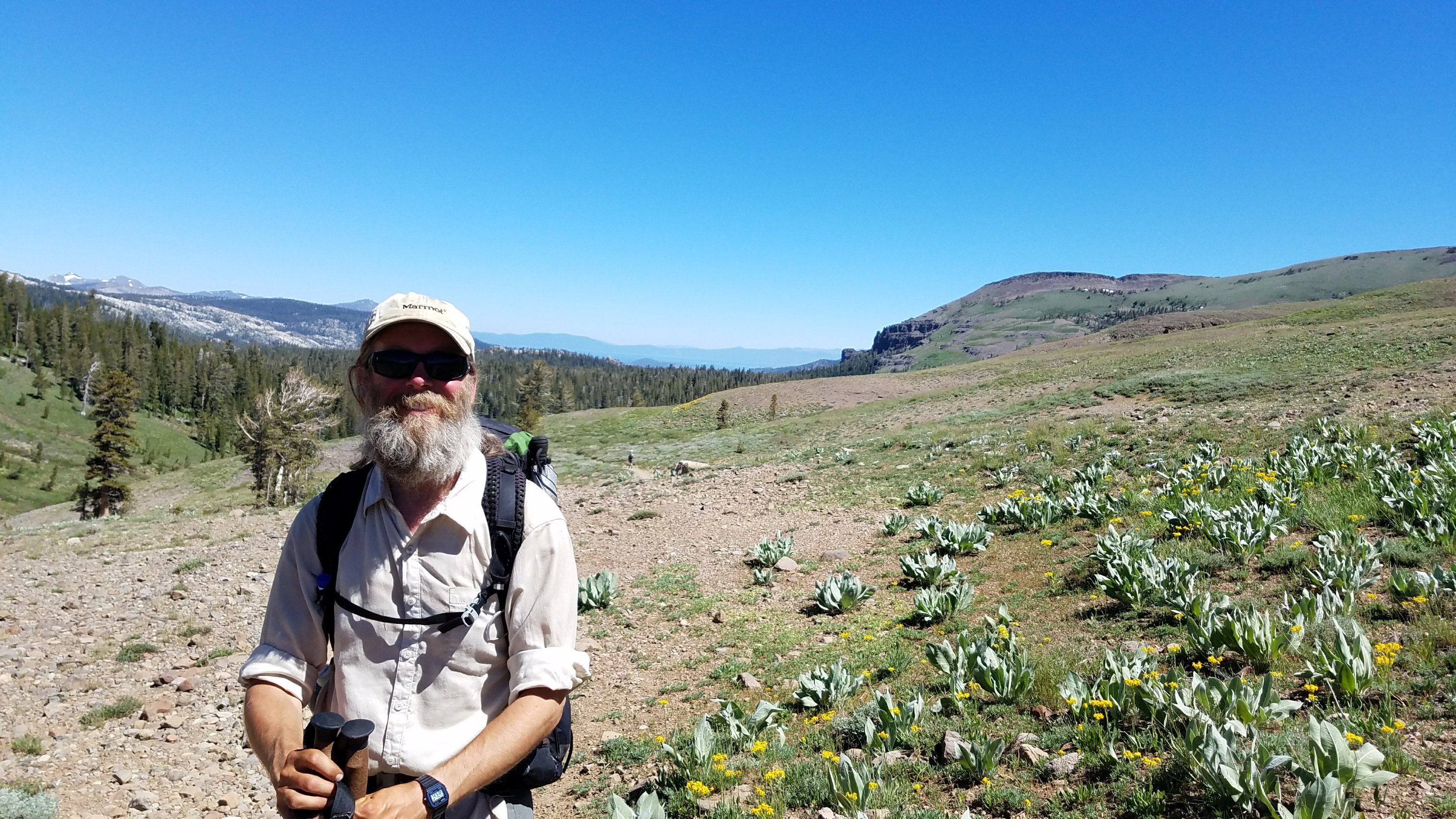 The benefits, of course, are epic views, neat experiences and meeting people.

I managed to get a few miles under my feet after leaving Kennedy Meadows. It was nice to cowboy camp again, although not having a bear can was a little disconcerting.

Up at 5, hiking by 5:30, I started down the canyon doing a number of sketchy off trail snow crossings as I wound my way farther and farther down. Eventually I was below the snow line and started making good time as the trail smoothed out and also flattened out. There were even aspen trees. I got it into my head that I would try to push as far and as hard as I could, too kind of test what my speed limit was. 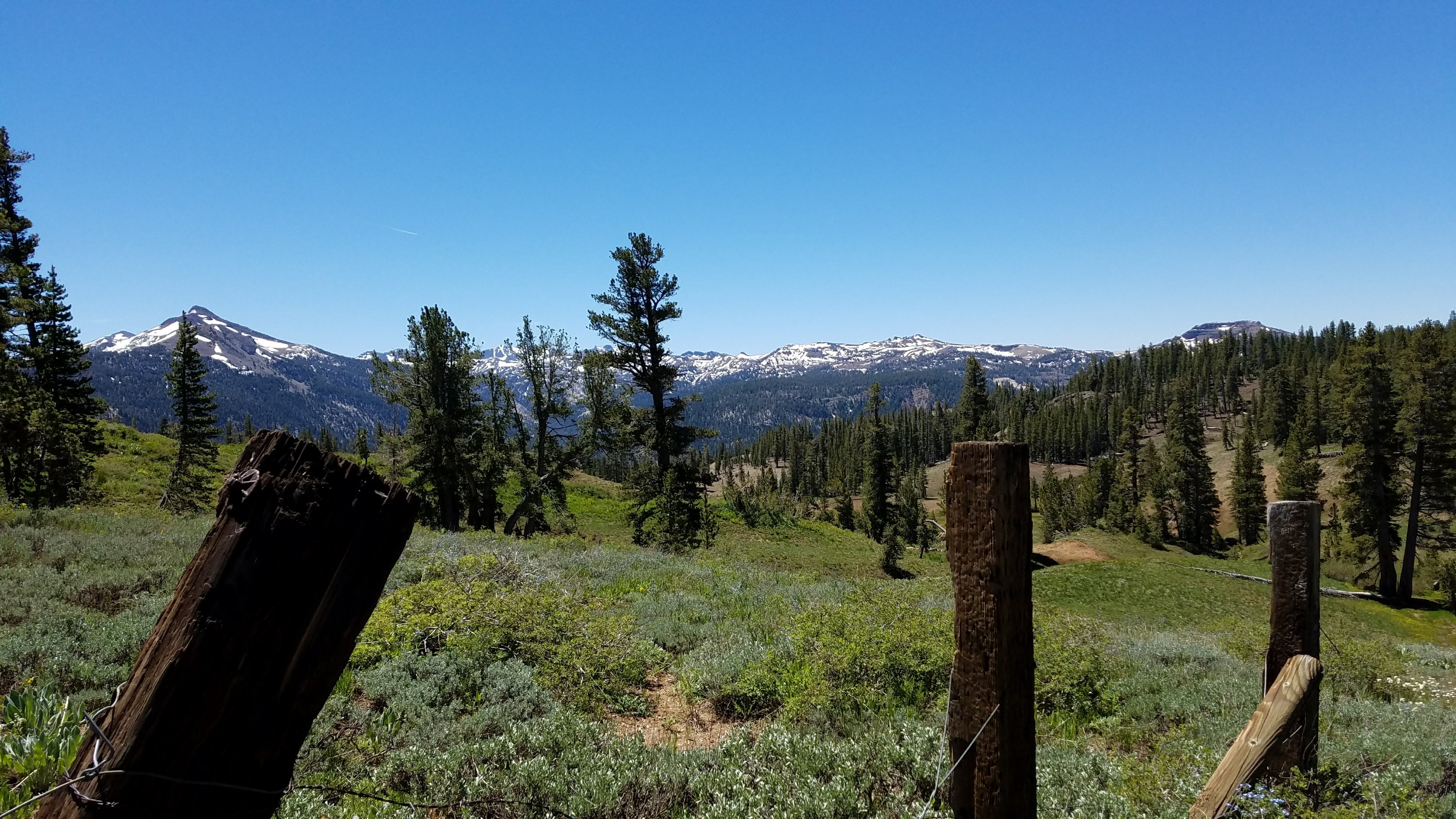 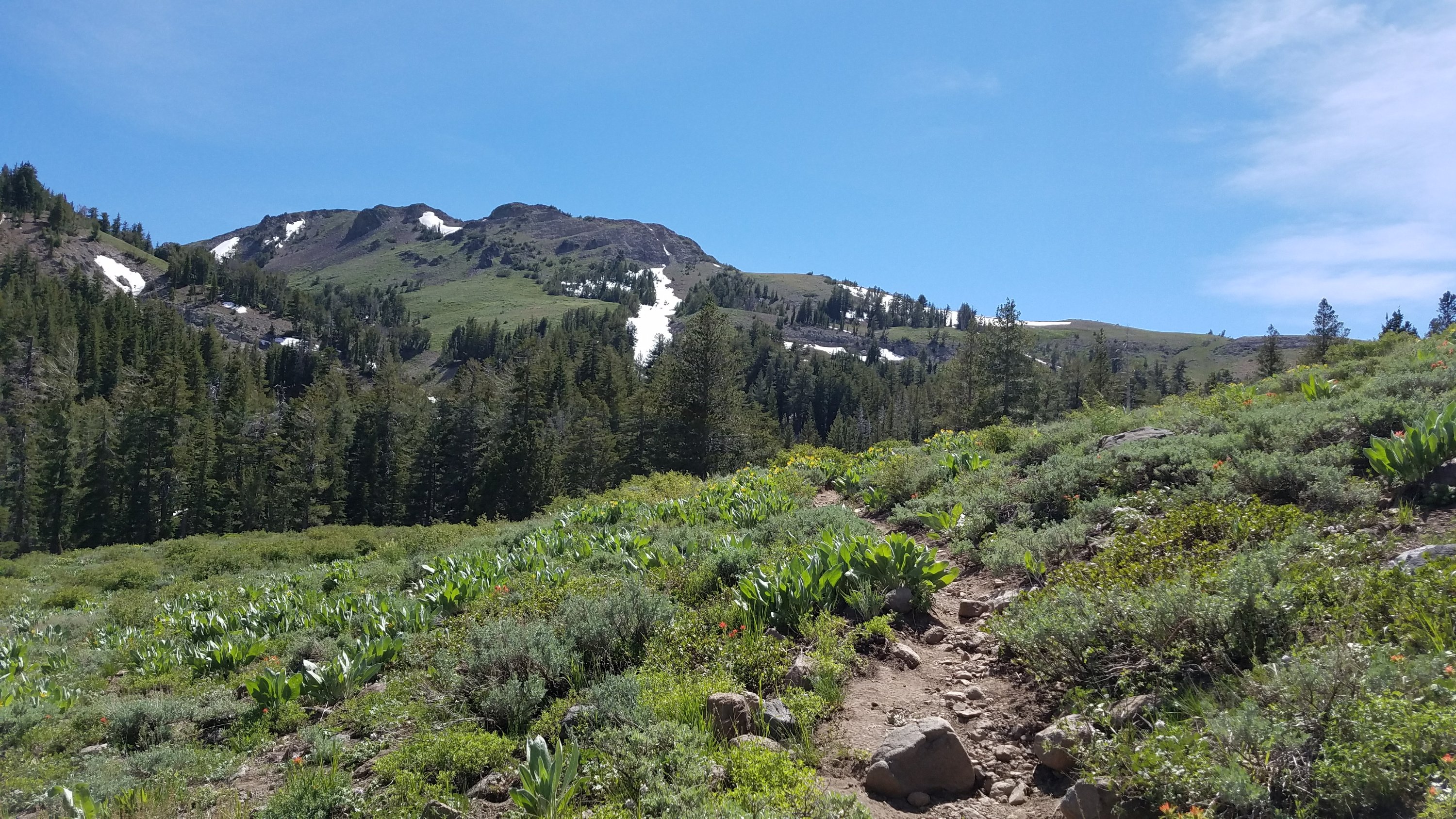 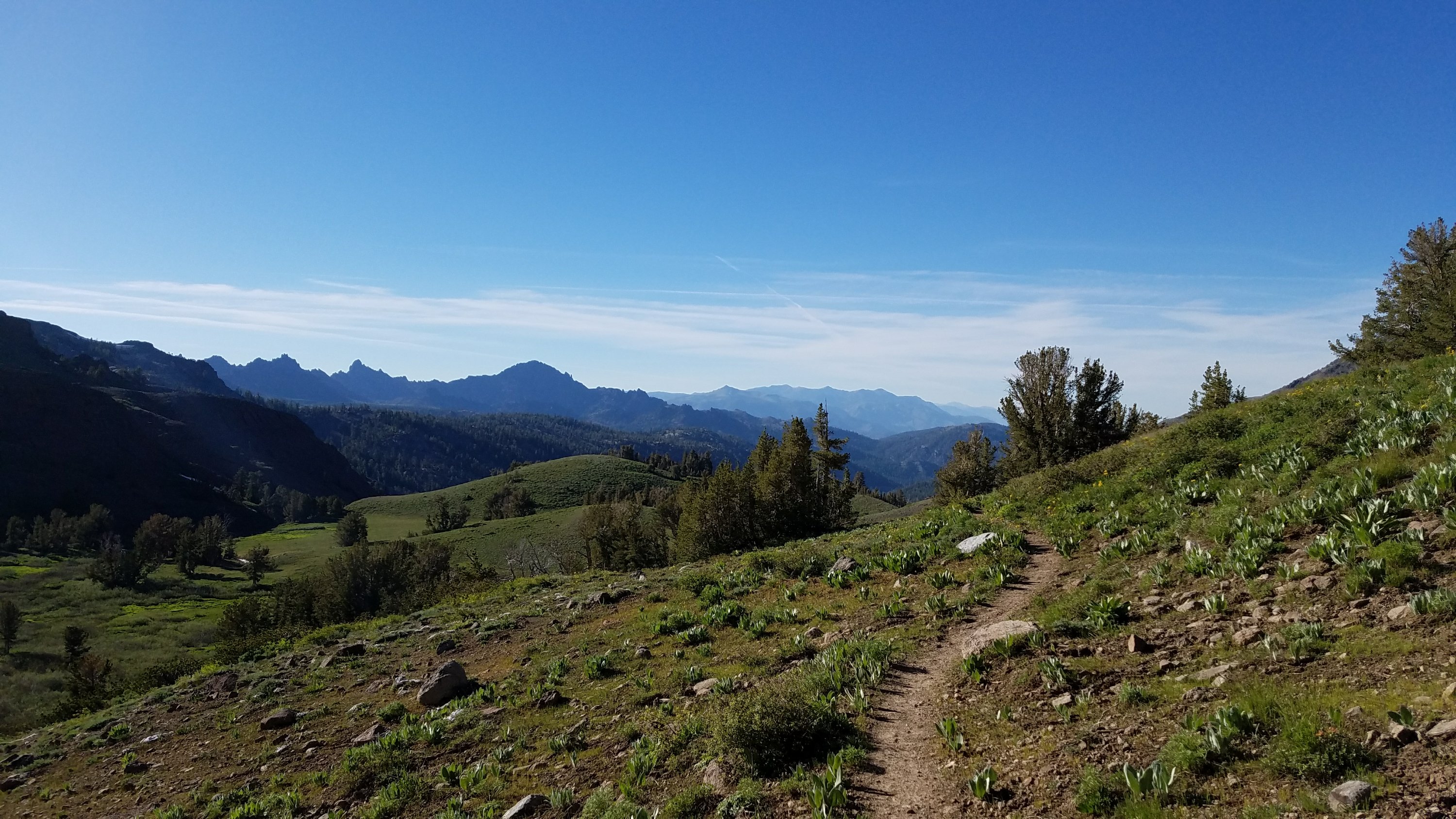 Ultimately I rolled into camp at around 8 p.m., where a woman named Cats was already asleep in her quilt. Tip-toeing around, I made camp and dinner and before I knew it I was asleep too.

The nice thing about hiking so late into the day is that the light changes and makes everything look beautiful. I also saw a deer! It was barely afraid of me, I think a combination of so little human contact and its supreme confidence in its ability to get away from me.

The downside for me of doing big days is that I have to basically just put my head down and go. Sometimes I even put my headphones in and listen to music, something which I have always hated seeing people do. I feel like the cost of doing miles is losing focus on everything around me. As David Bromberg says in 1 of his songs, The Strongest Man Alive, “there’s a motive for each motion and a purpose for each breath.”

Doing 26 miles after the few I banged out on the previous day meant that I only had about 45 miles to reach South Lake Tahoe. It raised the interesting math problem of whether or not it was worth trying to grind out that distance in 2 days, reaching town at the end of the day. The other option was to hit the brakes a little bit and then reach town first thing on the following morning.

For a number of reasons, I decided to go for it. The main reason being that I need a shower. In fact, a hiker named Renaissance said this morning, “I have never needed a shower so badly in my life.” I’m not sure I am at that point, but I am pretty close. It has been, or will be, 187 miles since my last shower and laundry. Remember those old laundry soap commercials for ring around the collar? I have ring around everything.

I figured if 26 was doable, 23 would be easier. I also checked some of my phone apps that have trail info and saw that the overall elevation would be less today. So I did the 23 point something to another campsite. It leaves just over 20 tomorrow with even less elevation gains than today. My goal is to get to Tahoe by 5 p.m. 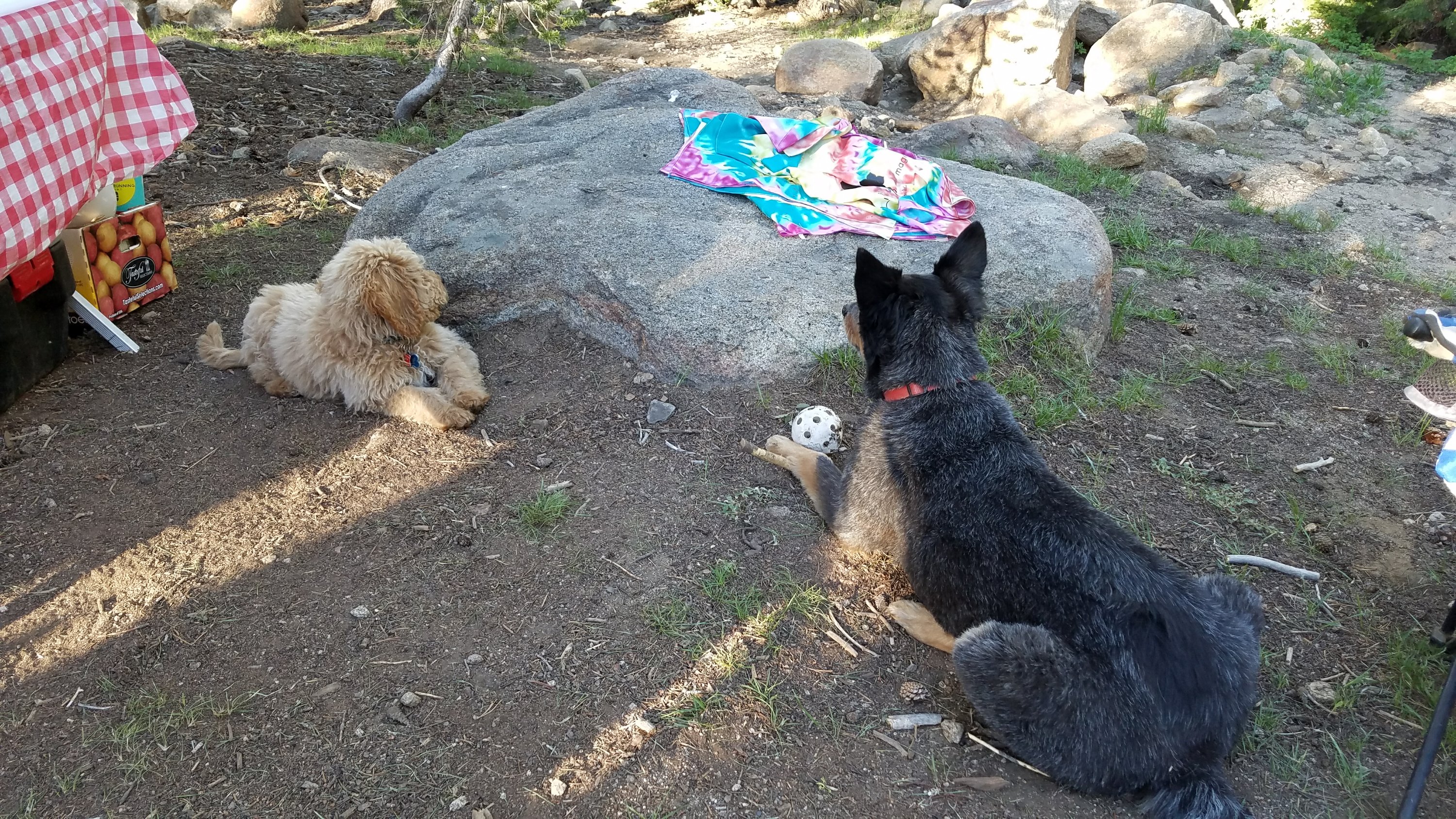 The day started with a hiker feed set up about a mile from where I camped. They had everything, but I focused mostly on the fruit and yogurt. I commented that it was nice to get vitamins that we’re not in a pill. Some folks were going whole hog with breakfast pizzas. The people who put the feed together were pretty cool, giving each of us a hug before sending us on our way. They also had great dogs.

The scenery really changed today. I talked to another hiker named Cheap, who happens to be studying geological engineering. He explained that we were moving into a different region where most of the rock was basalt and other volcanic types of rock, compared to the granite of the Sierra’s and Yosemite. Because it erodes so much faster and differently, this makes for much smoother foot beds, and longer slopes. 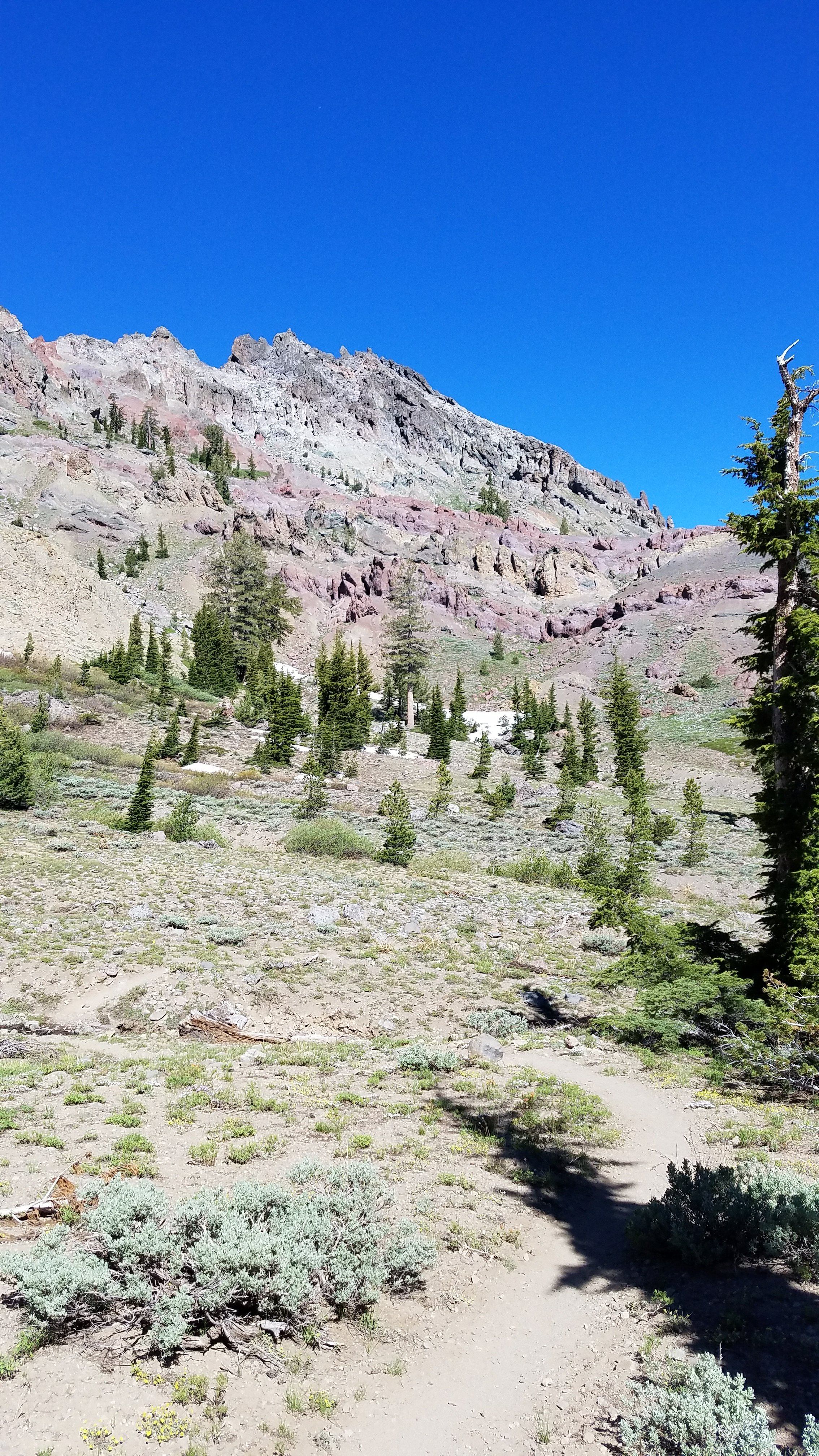 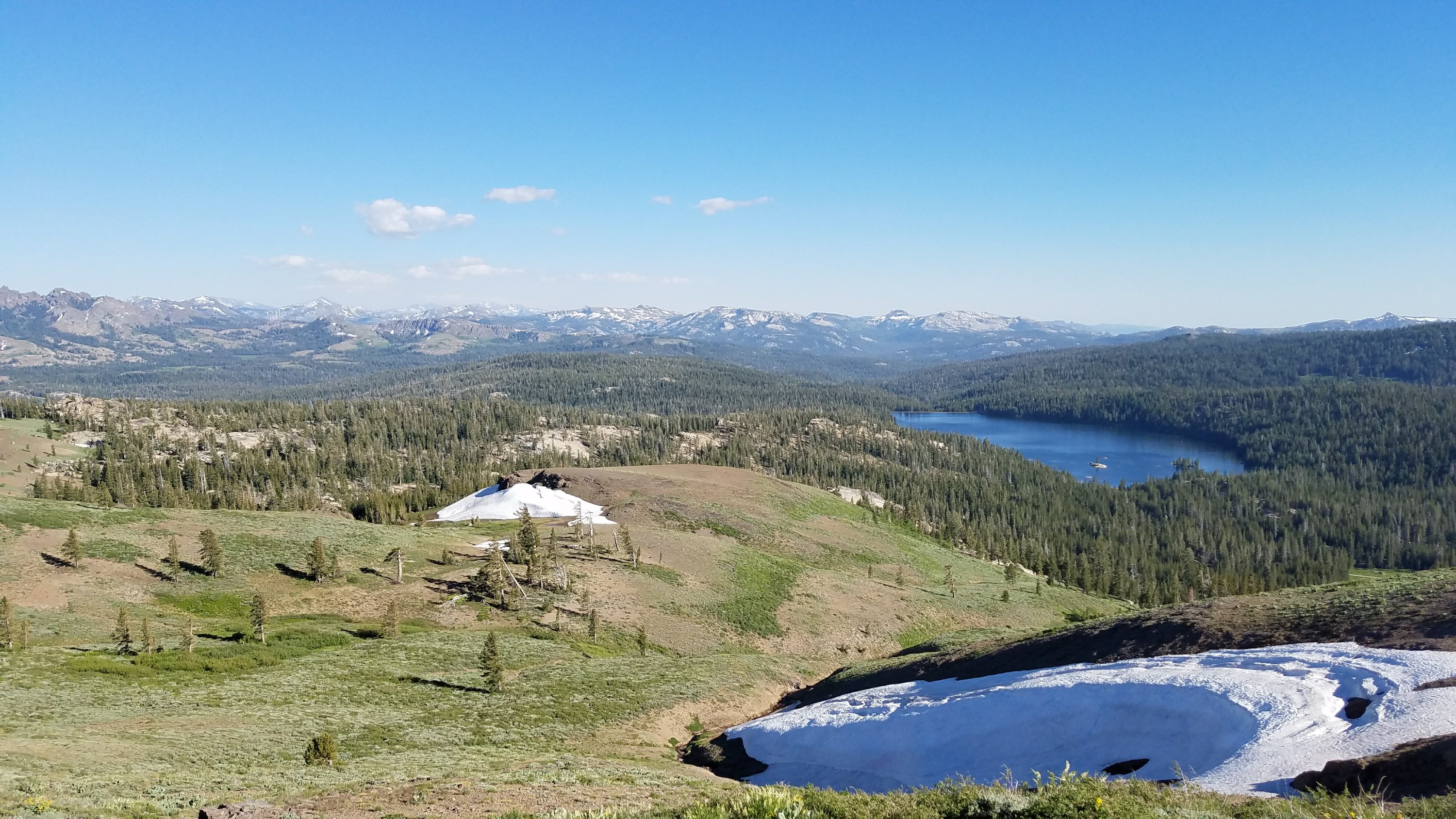 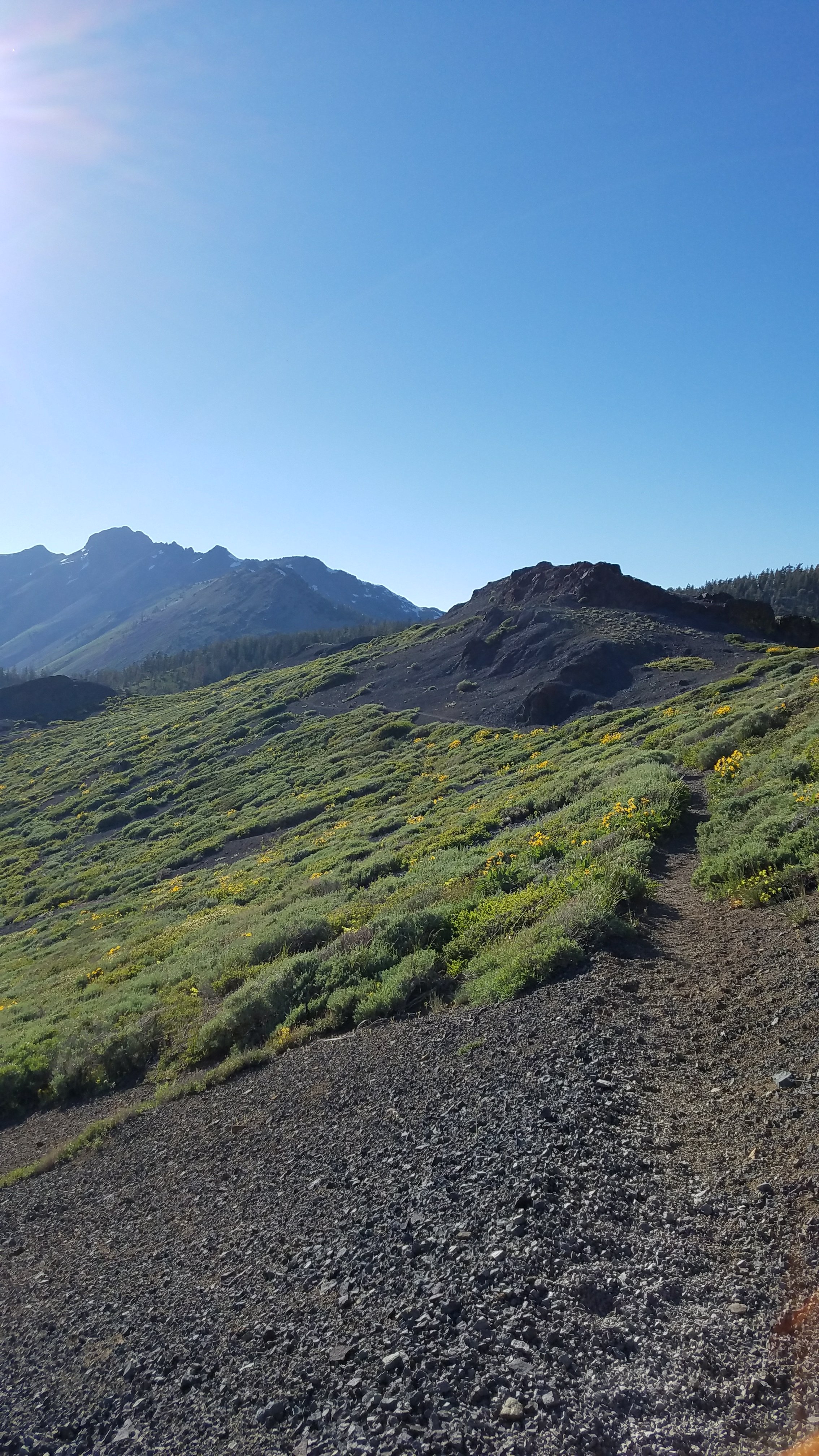 Over the past few days, I’ve started to meet a lot more people heading south. Some are section hikers, but a lot are flippers; people who started north along with me and then jumped over the mountains because of snow. They are heading south now, and when they reach the point that they left, they will jump back north. It’s nice to see new faces and talk to new people.

I got to my campsite by around 7, quickly set up my tent to avoid the mosquitoes, made dinner and was under the quilt by 8. I noticed that my hiker tan has returned. This was a one wet bandana and three baby wipes job. 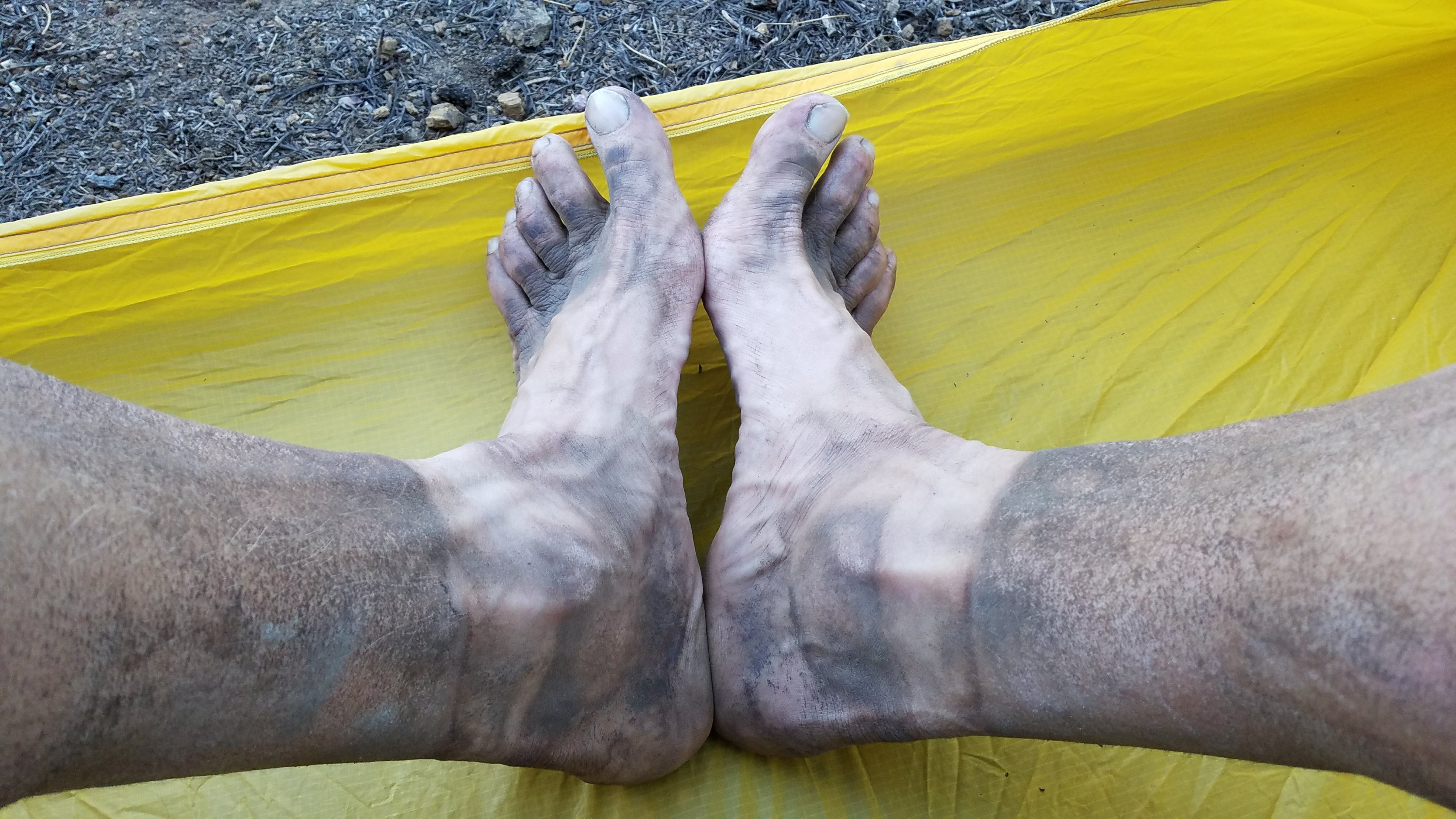 I’m going to try to get up especially early tomorrow, maybe closer to 4 since the sunrise is so early now. I want to have every opportunity of getting to town early, so that I can get clean.

4am didn’t happen, but at least I was walking by 6. And I got to watch the sunrise on the ridge I was camped on. 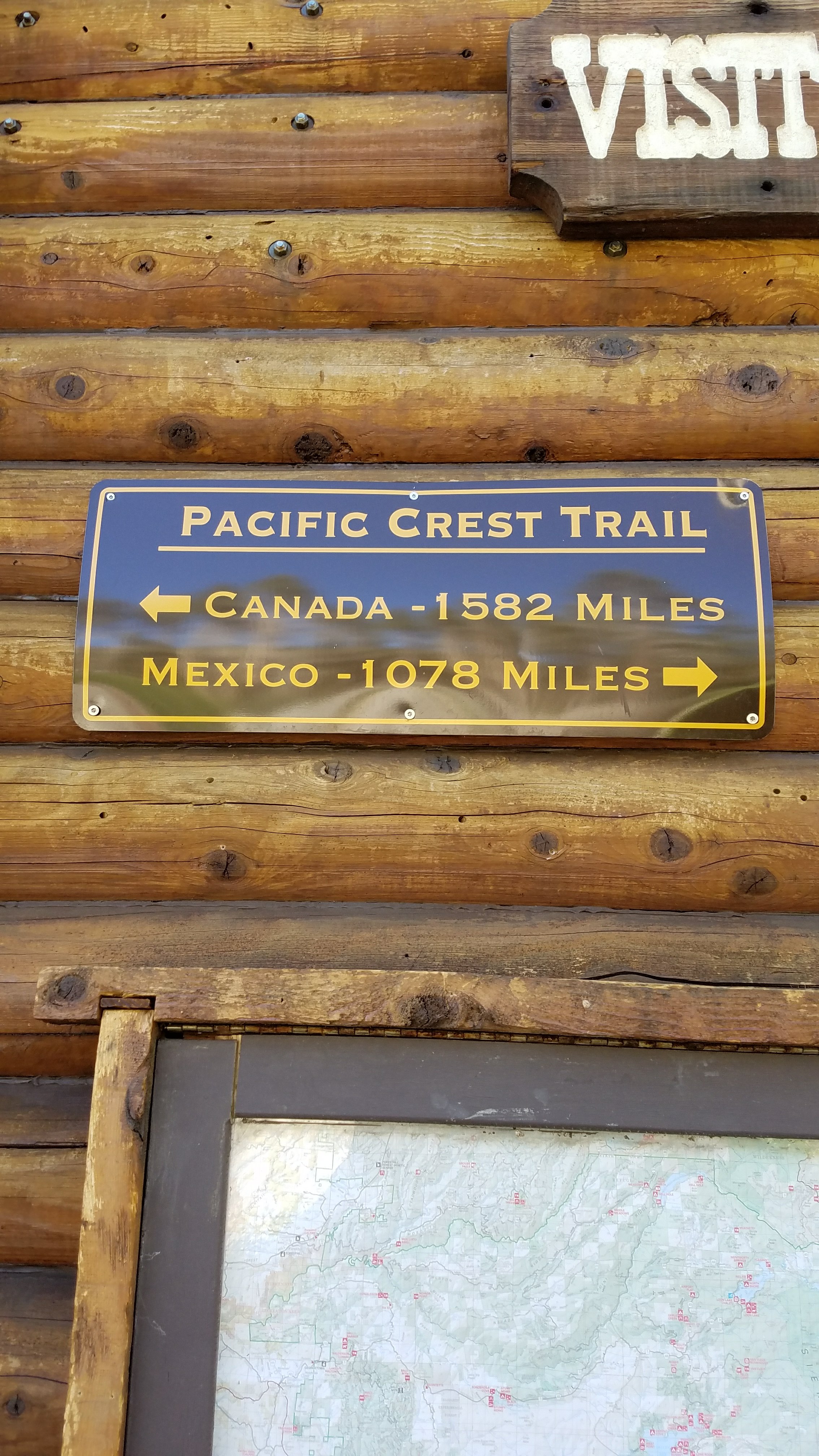 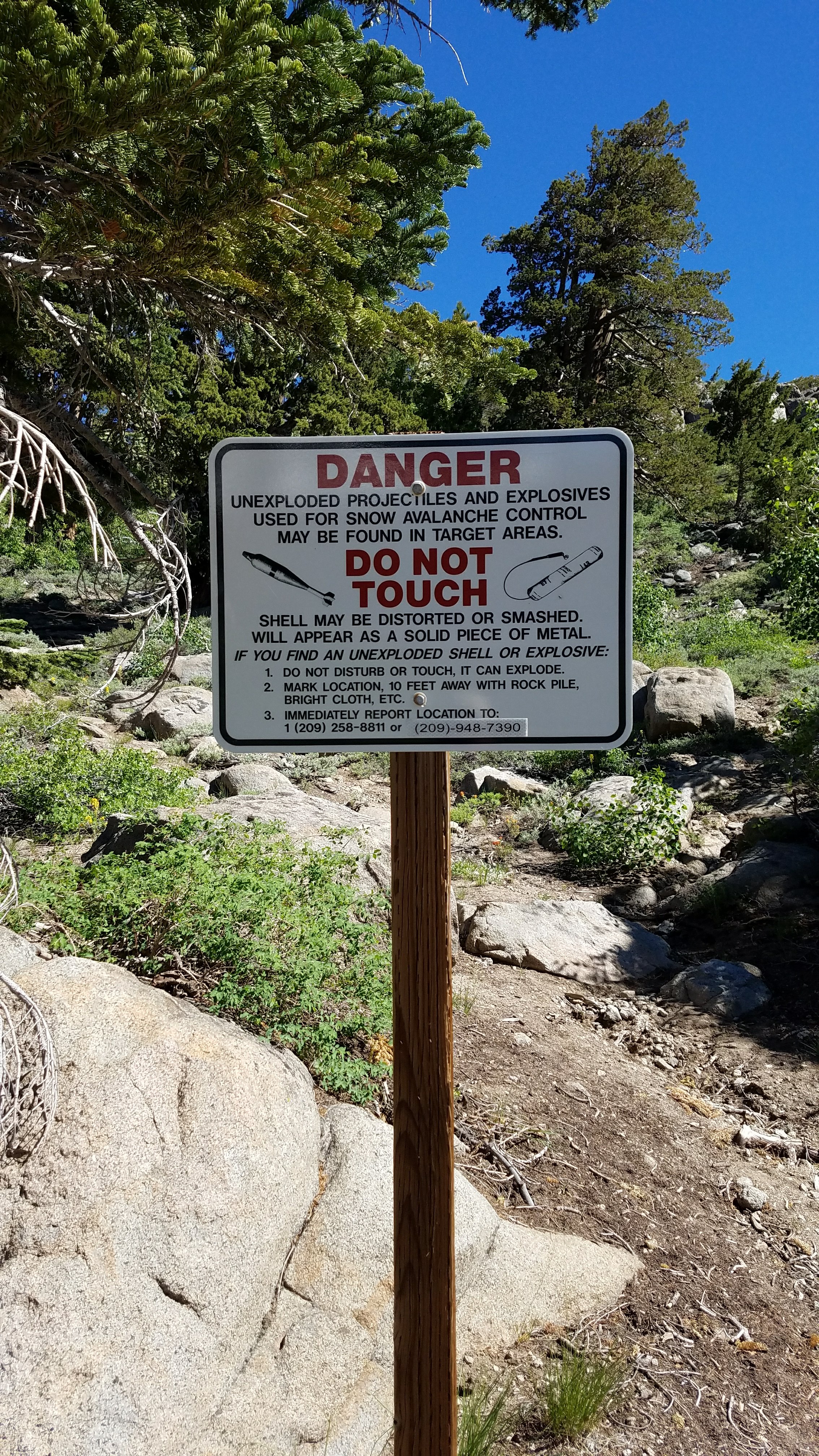 When I got to Carson Pass, I checked put the visitor center and found that they have all kinds of hiker snacks tbat they hand put for free! To sit in a proper chair, eat watermelon slices and drink a soda felt like the ultimate luxury. They also had a scale, which, if believed, showed that my weight loss slide has stopped. I am levelling off at about 20lbs below Campo. The people there were super nice, and commented how I didn’t stink. “I have a sensitive nose”, she said, “and you’re fine”. Amazing. Later, when 5 more hikers rolled in, she turned to me and said, “oh, THERES the smell”. I explained that I tried to clean up before town ( separate shirt, baby wipes ) but I had no explanation for my apparent cleanliness. 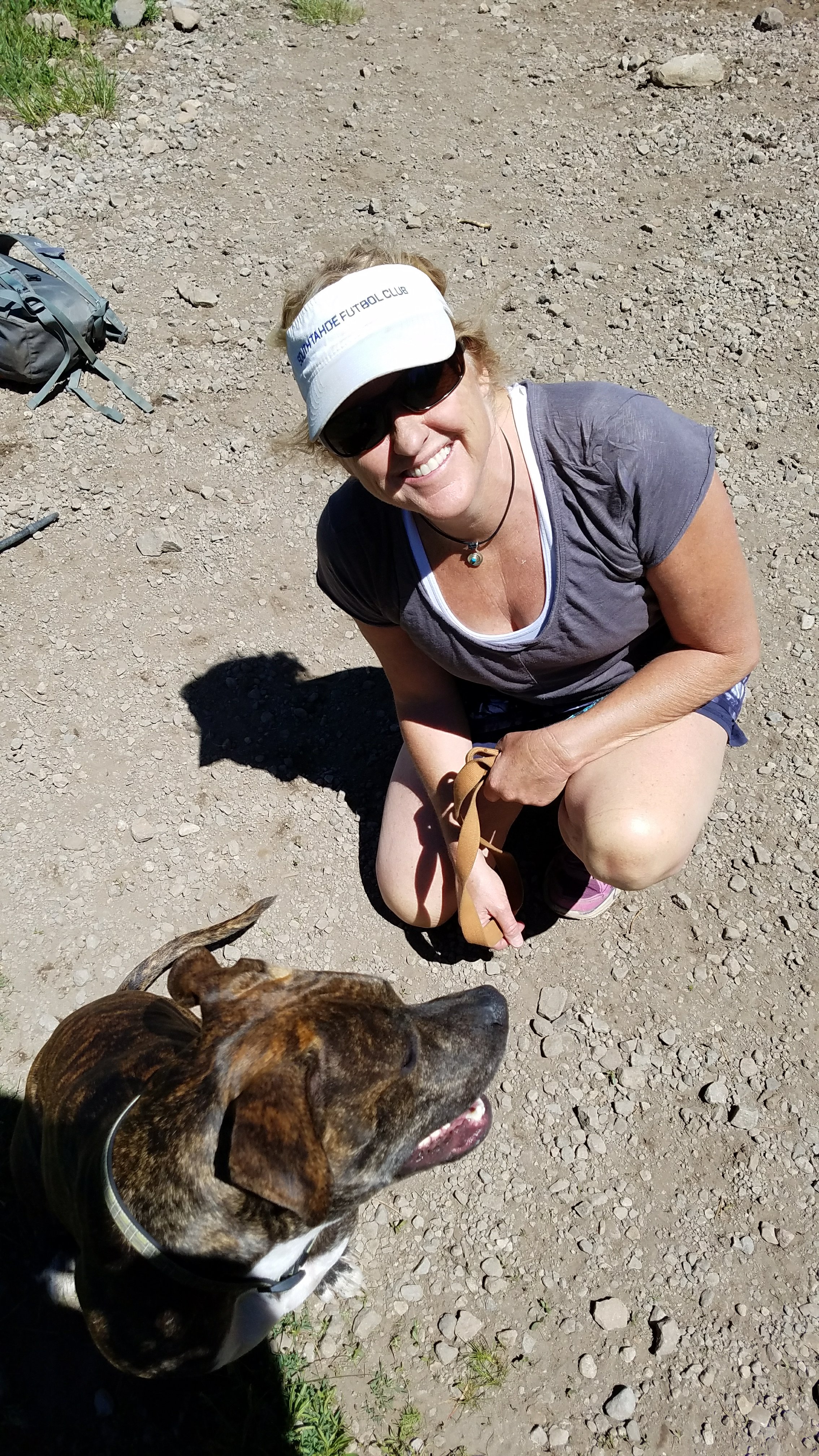 Right afterwards I ran into a dayhiker named Rene and her awesome pitbull Lloyd. We hiked the next few miles together, swapping stories and playing with the dog. She might try the PCT in a few years.

Here i sit in the Mellow Mountain hostel, resting my feet and listening to the other hikers get stoned. Tomorrow will be a slow half day, both because getting out of here is hard, and I’ve just added 9 lbs. of food to my pack.

The Sierra and Yosemite were great, and even South Lake Tahoe has its charms, but I’m kind of excited for NorCal. New towns, places where the mailing address is something like “the end of such and such road”. Some milestones are coming up too; the 1200, 1300 and halfway marks, then 1500 and finally the end of California. They’re at least visible goals now.

Everyone says NorCal is “easy” and “flat” but I suspect that’s hiker hyperbole. Although by definition, it has to be easier thzn the mountains I just crossed. We’ll see, I’ve also heard the bugs are epic.