After leaving Kennedy Meadows, despite some pretty crazy elevation, we still made good time except for logistical problems.

Following the trail up the canyon from Kennedy Meadows, it finally started to look like a new kind of terrain. The steep canyon walls and tree-lined slopes expanded out into a broad, grassy valley. We took a long break at a river, splashing around in the water, and checking out the swallows that lived under the bridge. 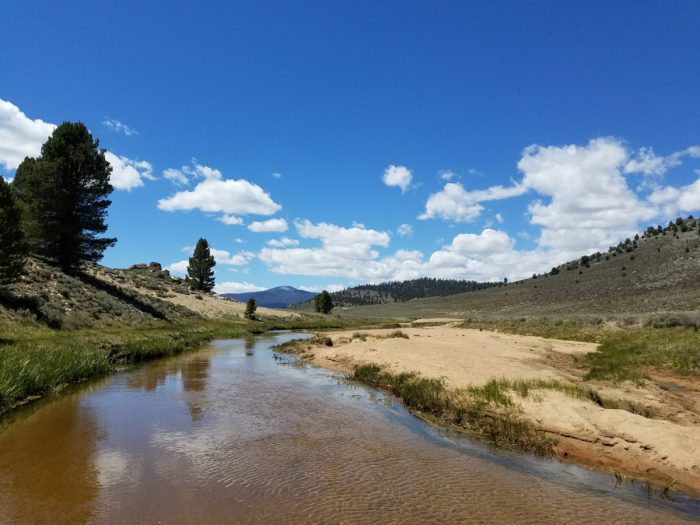 As usual I left first. The trail wound its way up from the valley floor into the trees.

Now, it’s not a big deal, but coming out of Kennedy Meadows 9,000 feet seemed like a lot, and the air seemed very thin.

I hiked with Cherry Bomb for most of the next day, and midday we ran across three MYTH hikers – multiyear thru-hikers; Chief, Spaz, and Jed Smith. They planned to do the whole PCT over three years. I’ve always thought that those who section hike a trail have a much harder time than thru-hikers.

Coming down the ridge, I saw that the cumulus clouds I had been watching all day were getting more and more ominous looking. I put the pedal down as best I could going downhill but after a few minutes I heard thunder. Taking a lesson from the other day, I immediately stopped, put my rain gear on, and got out my umbrella. Less than five minutes later thunder began crashing overhead and pea-sized hail started raining down on me. I knew that this storm would not last very long, so I just took a break under a large tree where I dodged most of it. About ten minutes later it began to slack off , so I kept hiking. In less than a mile, I got to the campsite. 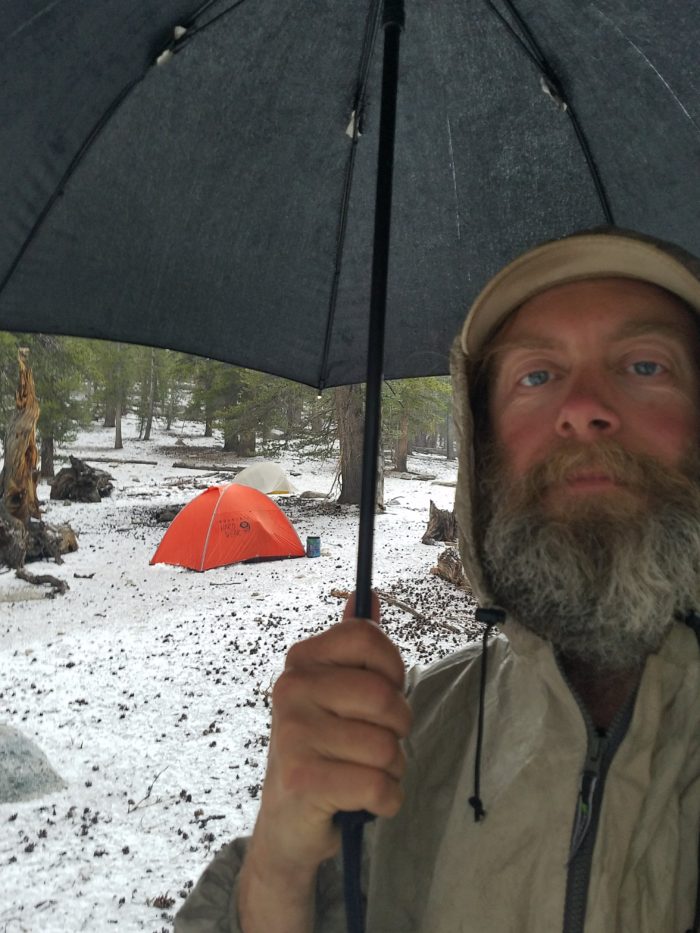 There were a number of very wet-looking tents set up. Some were only half pitched, so, while hiding under my umbrella, I helped people finished setting up their tents from the outside.

A few minutes later, the hail almost completely stopped. Surge was the first to emerge from his tent. Somewhat bedraggled, looking around, he summed things up perfectly. “Well that sucked,” he said. We spent the next 15 or 20 minutes hiding under the trees as the thunder wasn’t quite finished with us, occasionally alarmingly so.

Everyone’s spirits were low, and most people were wet in their wet tents. While everyone was standing around wet and cold, I started making dinner. Seeing their low spirits, I suggested that we make a fire. Suddenly everyone was excited, motivated, and happy. In short order we had a huge pile of wood stacked. Surge was clever enough to realize that the duff under the big trees was dry if you dug down an inch or so, and Gargoyle provided some paper in the form of his old maps. After some gymnastics, we managed to get the fire started and the dry pine made a nice blaze. In a few minutes, a terrible night was transformed. 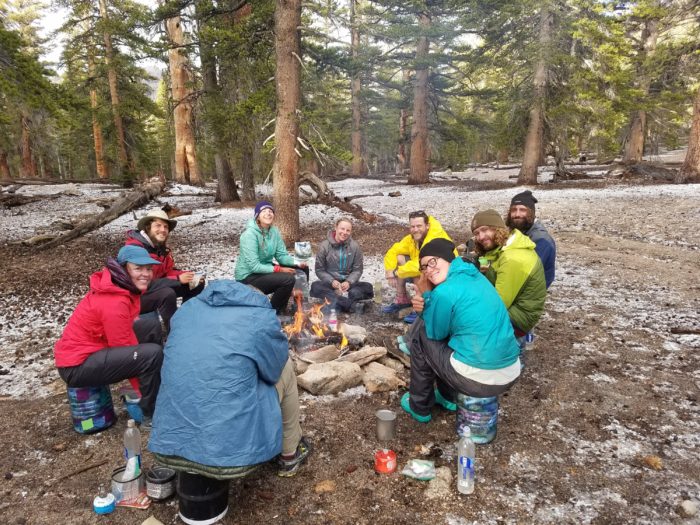 Part of the problem with hiking in a group is that almost nobody hikes the same speed, or has the same endurance, or even wants to go as far as the rest. We typically set a lunch point and a dinner point before we set out in the morning. However, there’s always a little wiggle room, especially at the end of the day, when someone wants to do a few miles more. 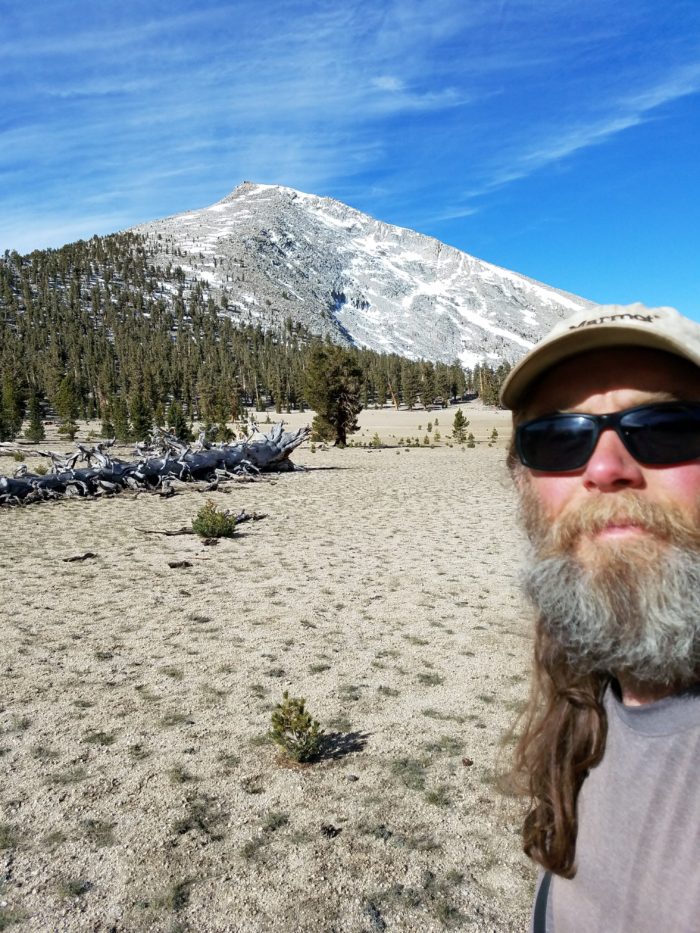 Because I am always the caboose, I usually take fewer breaks than everyone in an effort to keep up. The downside of this is that when everyone gets off the trail at a lake you run the risk of hiking right by them and being the lead dog. When I got to the place we had talked about for dinner, no one was there, so I assumed that we had all decided to hike on.

I ended up doing a 20-mile day down off the 11,000 foot ridge, finishing up the day at a trail junction just inside Sequoia National Park. It was actually great to camp by myself and just enjoy the solitude, the sounds of the stream, and the birds.

The next day was only seven trail miles with a detour toward Crabtree Meadows. Mt. Whitney is the tallest point in the continental United States at 14,505 feet, and is only 8.5 miles off the trail. I know of no one who did not make the detour to try to climb the mountain. I know of one hiker who could not make the summit due to altitude sickness, but otherwise it’s an almost mandatory trip.

After resting with the many exhausted hikers at the meadow, I hiked up Whitney Creek and camped just short of 12,000 feet after the last lake. I was joined by Surge and Faceplant and we tried to get to bed early so that we could get up by 4. The goal in any big climb is to do it while the snow is still hard in the morning. 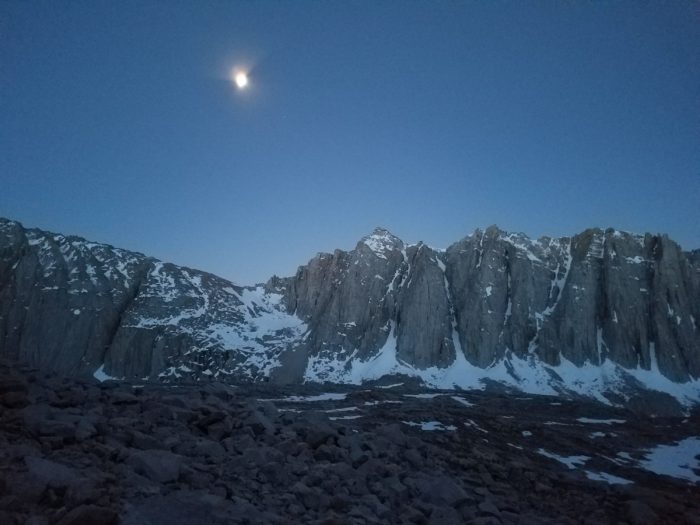 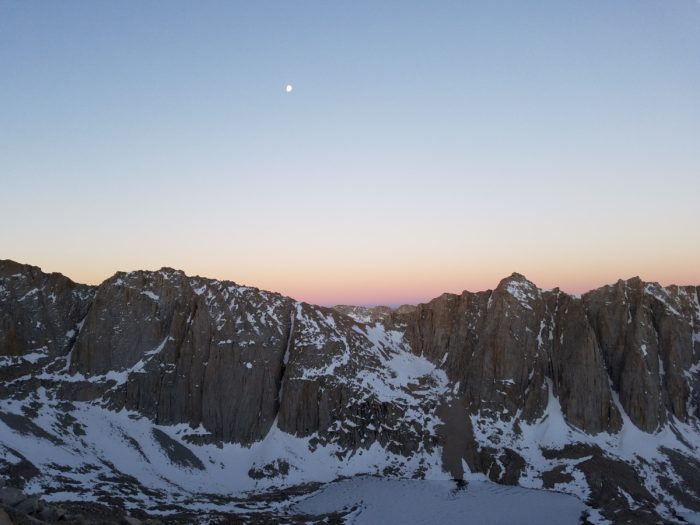 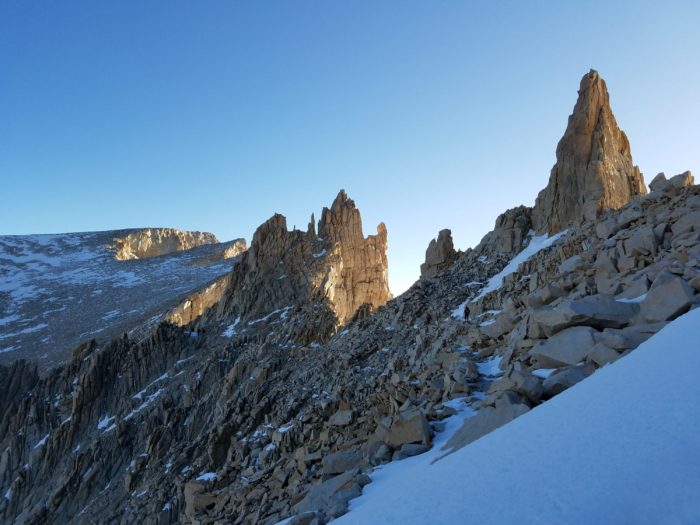 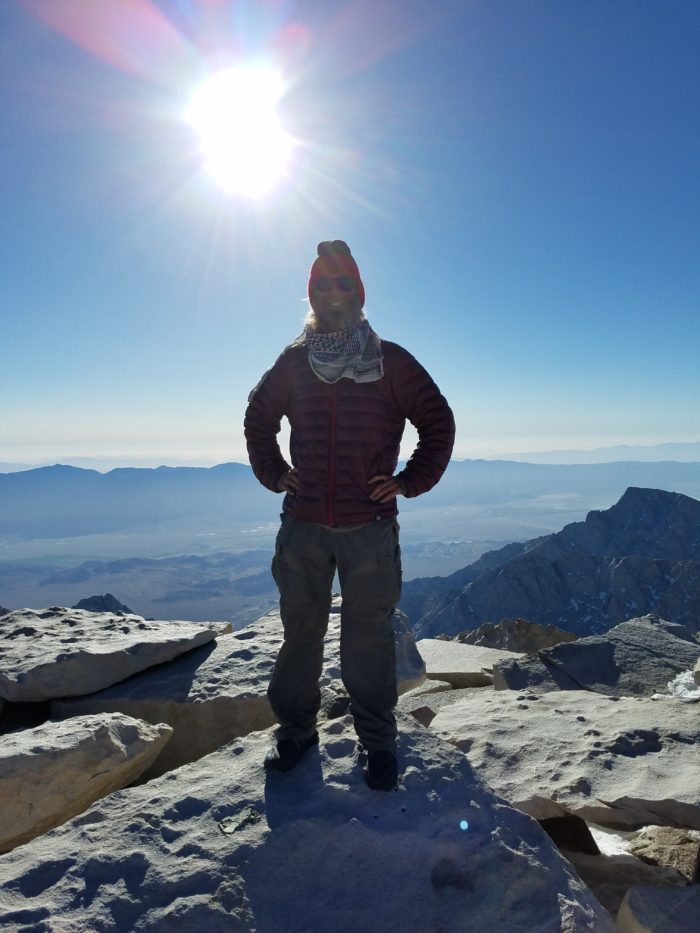 Because it’s the Sierra, of course there are two very difficult days in a row. We made it about seven miles on the trail past Whitney and camped. A few miles later stood Forester Pass, the highest point on the PCT. To make sure we did it safely, we had to get up at 4 again and catch the snow while it was still hard from the overnight subfreezing temperatures. 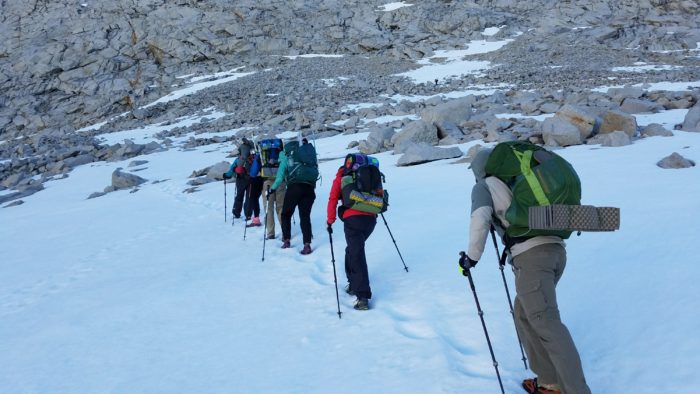 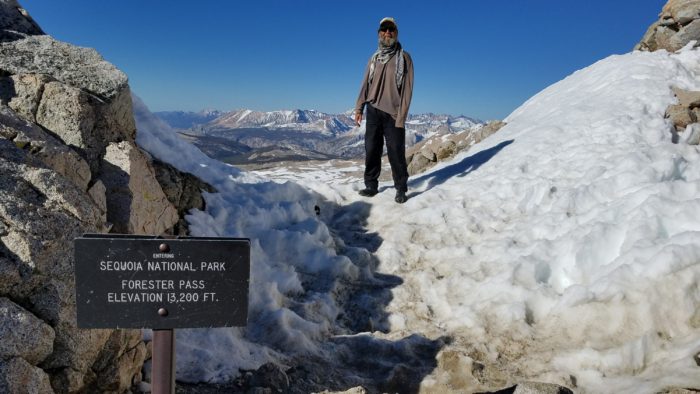 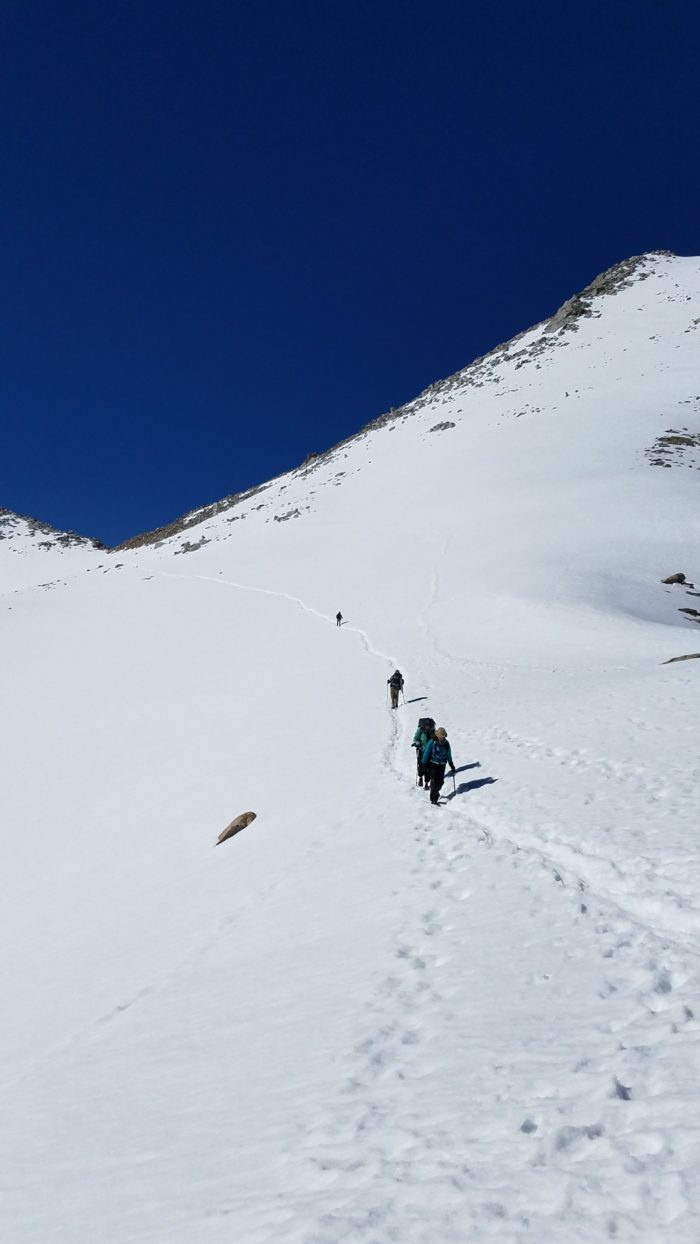 Ultimately, it was a lot easier and blessed technical then climbing Mt. Whitney. While still exciting and challenging, it was as I said when I crossed the ice chute, disappointing and a little lame. The really fun stuff began descending the snowfield on the other side.

Worn out from the day, I only did 16 miles to a campsite on the side trail toward the highway. We were eager to get to town, but had plenty of food and needed a break. Also, we knew we could get a ride from our trail friend Faceplant. That night we camped above Bullfrog Lake and enjoyed pretty much the best view ever. 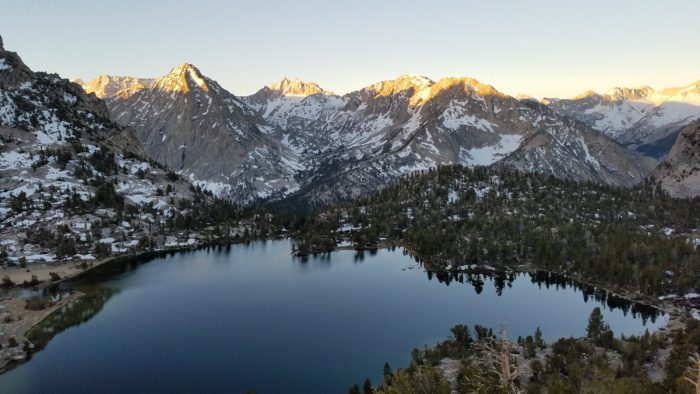 The next day we did the short walk to the pass at 11,700 feet, then cruised down the last few miles to the trailhead.

On the way I met a trail buddy from last year who is doing the whole trail again this year. We met on the second night in 2017, where during a rainstorm we all ate dinner in the men’s room at Mt. Laguna. 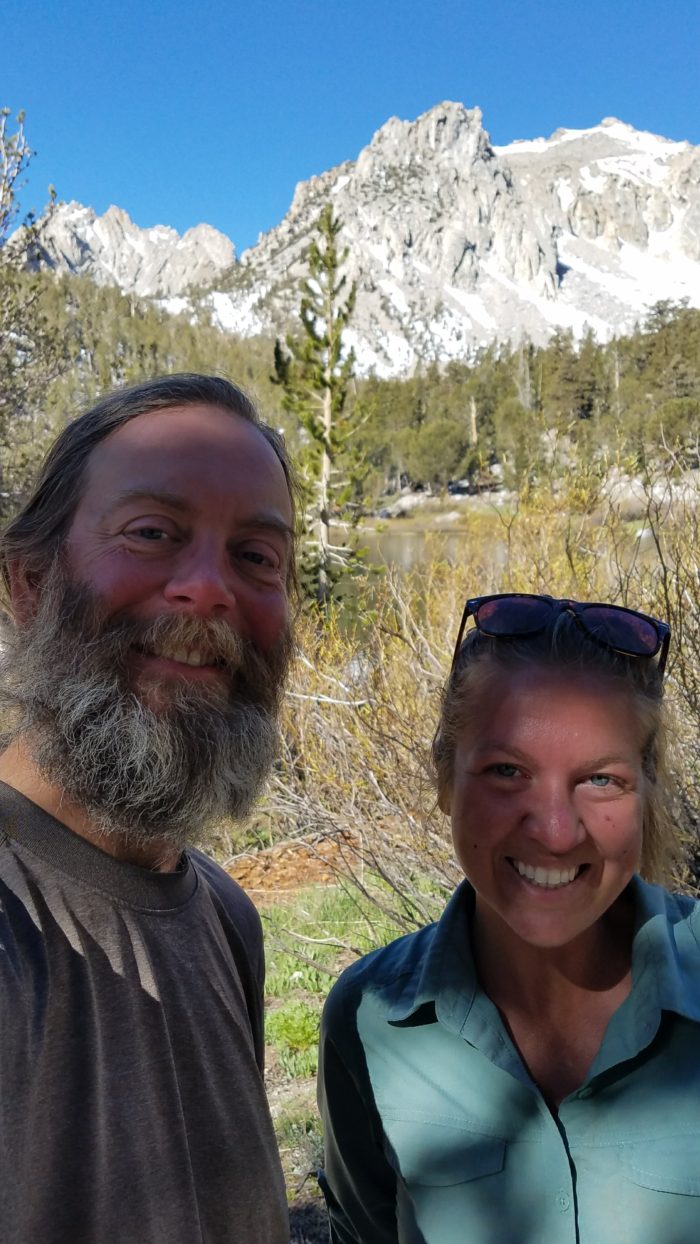 Bouncing down the switchbacks, I had great views and a stream to keep me company all the way to the road.

We stacked nine people in a Ford Excursion and rode for 90 minutes, and ended up in Bishop. Outside of the hostel there aren’t many cheap options for hikers. I was so hot and tired and hungry and stinky that I coughed up the money for the Travelodge. I love hanging out with my trail friends, but I’ve smelled them for weeks so I splurged on my own room. 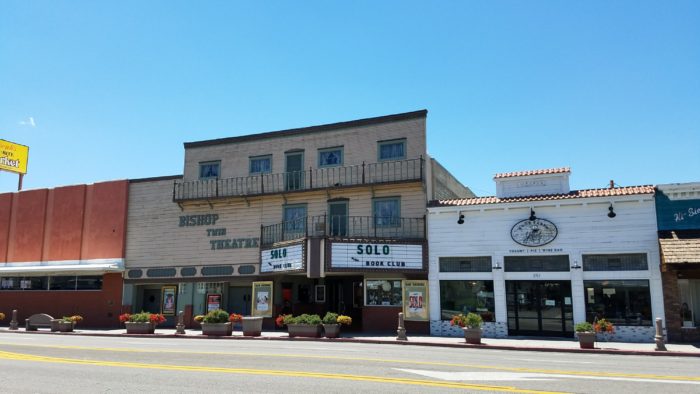 Bishop is a kind of funny old town. It looks like a boomtown fueled 50 years ago by vacationers and real estate speculators. Its got an old-timey feel, with a sort of Beat flavor, while there’s an injection of new technology and new ways.