Video updates – new stuff and some older stuff uploaded to my youtube channel, which you can get to from the top of the page.

I got in and out of the Big Bears without too much hassle.  The hassle was getting around in and between the two towns .  My packages were in Big Bear City which I had originally planned to only visit just to get food and mail.  Once I was there, however, I realized that the resupply in Big Bear City was tiny, and, one of my packages had not yet arrived at the post office.  I decided to take a bus to Big Bear Lake, which has a lot more shopping options and also a hiker hostel where I thought I could do laundry and take a shower.  At the hostel, for an undisclosed and unofficial payment which I believe went directly to their weed fund, I was able to do laundry take a shower and completely repack my bag including  my new tent .  I have a new 2 man Big Agnes  Fly Creek which, despite being a two-man tent, is half a pound lighter and packs down smaller than my old one man tent.  I made my way to the grocery store where I made the mistake of shopping while hungry, and there hooked up with Jade and Q who gave me the news about everyone else.  From there I got a quick hitch back to the Big Bear City Post Office where my anniversary present was waiting.  I then hung out in the laundromat using their power to recharge my phone while talking to the friendly townspeople of Big Bear City.  One even gave me A hug.  A mile roadwalk later I was back on Route 18 and within 20 minutes got a hitch back to the trail by dinner time.  At the trailhead I ran into One-Boot who had escaped just like I did. We both made it to the first campsite at 268 where there was a faucet, also a cool outhouse.

The next day hiking was great, my foot hurt a little, and my blisters hurt about the same, but it was a great day of slow ridge climbs followed by spectacular views of Big Bear Lake. 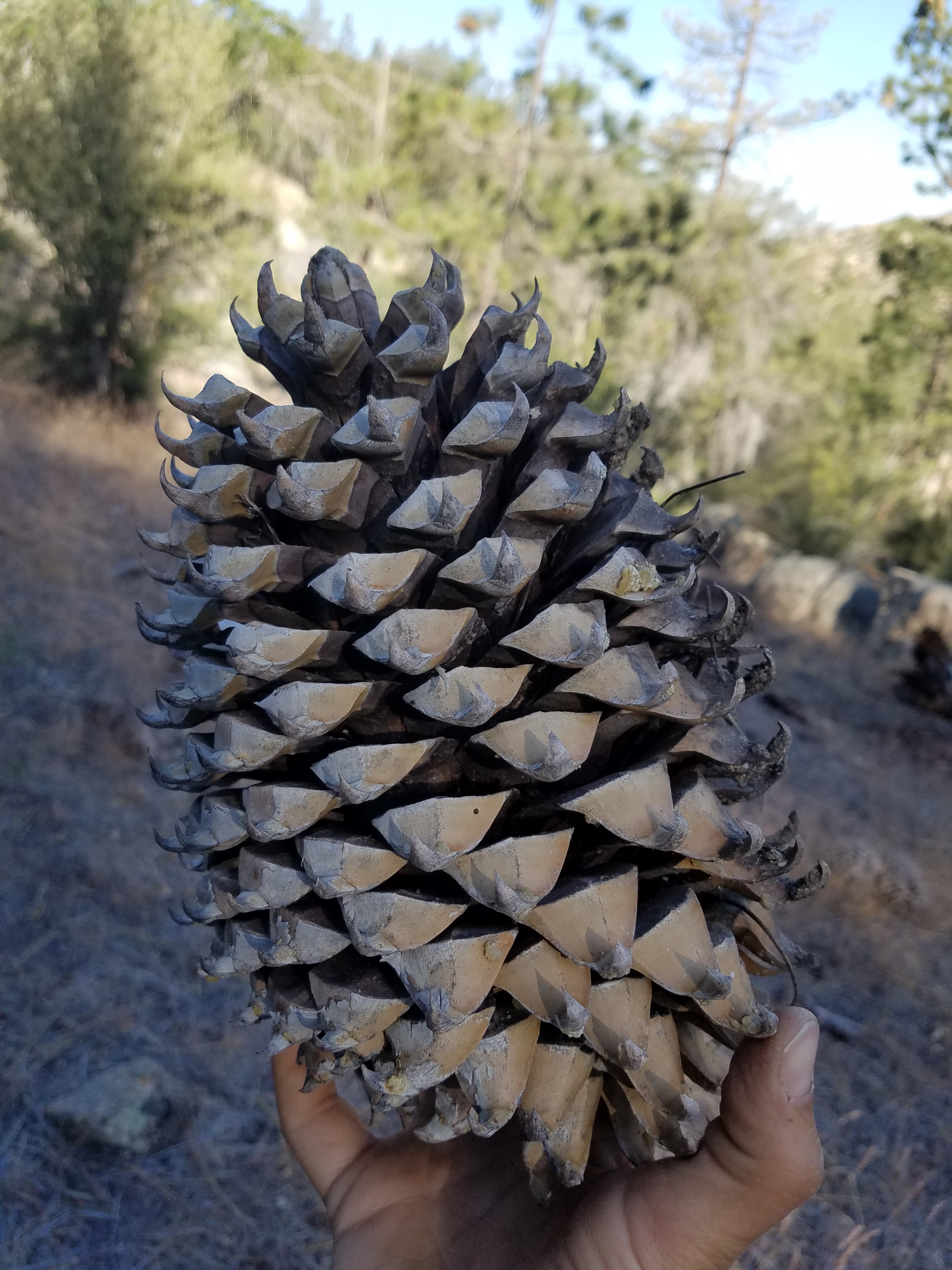 This is the size and weight of a cantaloupe.

Then the long descent into Holcolm Creek Canyon which while hot and very exposed had the neat advantage of being covered in these wild desert honeysuckle things filling the whole canyon with the smell of honey.  Pushing on past what I learned was the last water source on trail, I started hiking and hiking and hiking until I finally found water at mile 292 making it a 24 mile day.  My feet really took a pounding and I paid the price for doing so much full sun hot weather hiking.

Finally we got to a small stream crossing  and there were a few campsites. There I ran into this group of British and Australian people who were withering in the heat.

Next 20 miles were probably my worst on the trail. It was almost entirely through the drainage of Deep Creek Canyon which, although there were some natural Hot Springs, the entire canyon was exposed during the day, hot, and without water. You could hear the water flowing in the bottom of the canyon all day long but none of it was available to drink because it was 500 feet down.

Pretty cool to cross the 300 mile mark though. 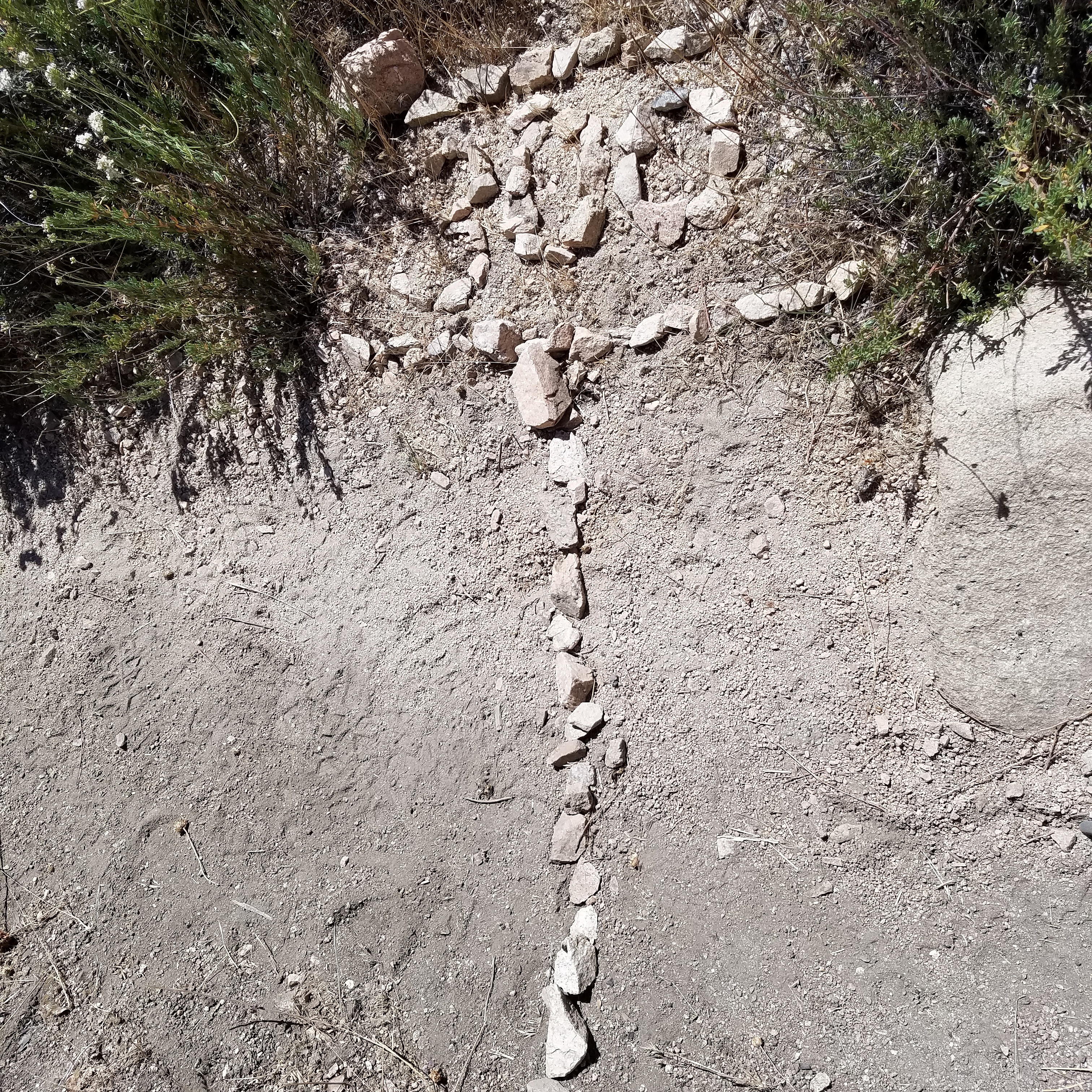 The hot springs turned out to be basically a trashed out beach, with garbage on the ground and toilet paper in the bushes, and yes, a hot spring coming out of the grou nd emptying into the creek.  During this time I think because of the sweat and just the constant downhill trudging my blisters got to the point where I had basically decided to quit. I figured if hiking is going to be this painful all the time then it is no longer fun and I shouldn’t be doing it. We are talking frequent stabbing pain up to a 5 or a 6 out of 10.  It was pretty depressing since I had only come three hundred or so miles and thought I would not going to be able to continue. My worst day.  The day did end on a sort of cool note.  I got to the end of the canyon where the Mojave Dam Spillway was right at sunset.

It was just neat to see such a giant construction plus after the spillway the trail wound down under the dam where the constant feed of water from the dam and the creek created this huge grove of desert willows. Some beavers had dammed up the stream so I had to ford some large pools, over a handy bridge built of logs. 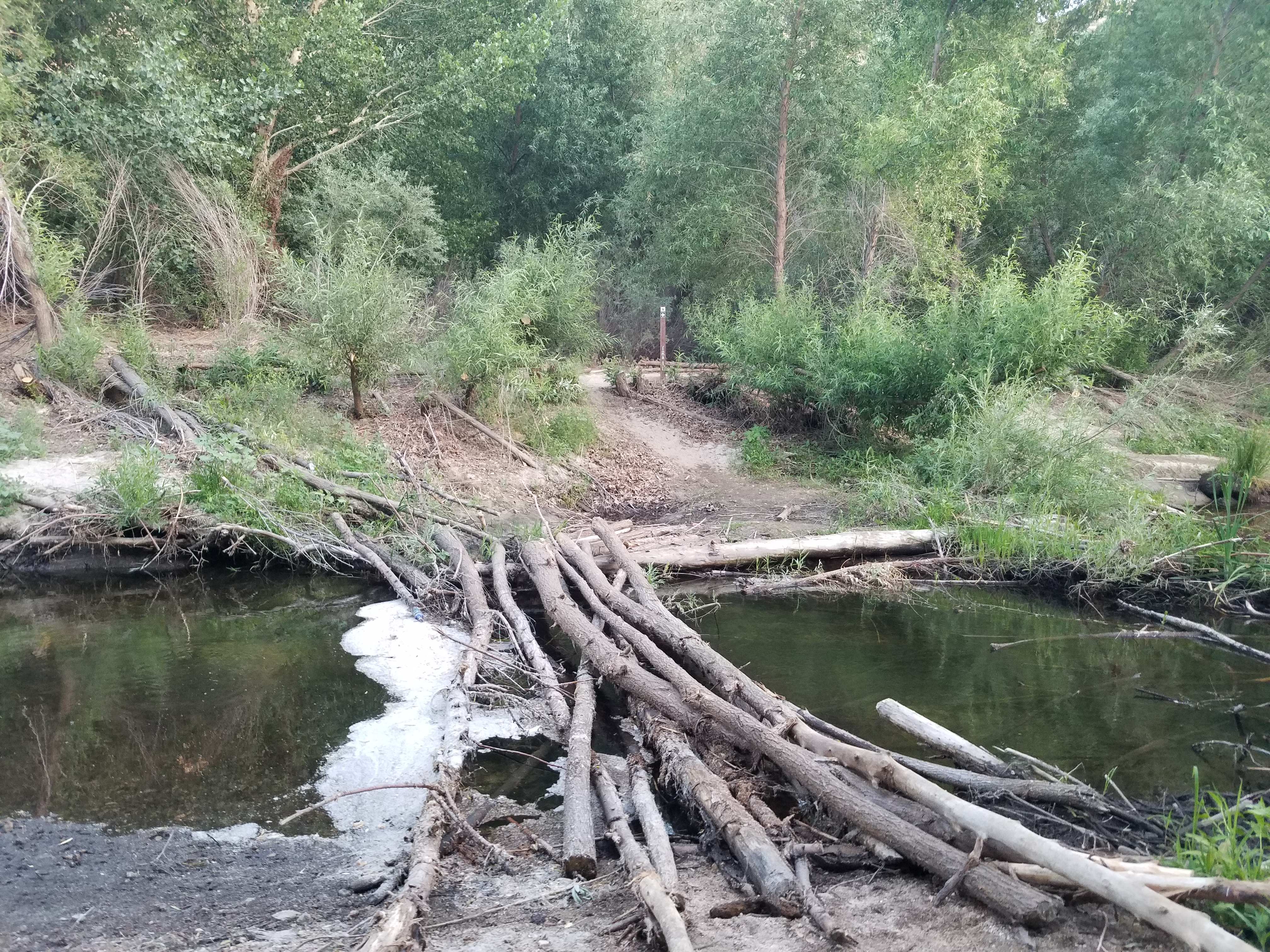 We kept hearing the beavers swimming, slapping their tails on the water all night. I wouldn’t have thought they were beavers in the desert but although I didn’t see any it’s the only logical explanation. Plus I heard that the whole thing was caused by beavers…so that must be it.

Perhaps it’s always darkest before the dawn, because the next day was great.  I had a long smooth hike for about 10 miles,  plenty of water and plenty of shade under the umbrella. And, I got some actual Trail Magic – just a cooler full of cold water bottles in the woods.

Grinding up over the ridge the trail circled a huge lake that was behind the dam and although I did not get any Yogi Magic from the people at the lake,  I did manage to take a three-hour siesta in the shade and refill all of my water. Pressing on I hiked for a bit and caught up with Ocelot, Trailblazer, and Lunch Box. They were actually nice enough to give me the next campsite because they knew my feet were in trouble, and they also knew that they could hike five to ten more miles simply if they wanted to. I spent some time catching up on messages and got a text from Unstoppable Zod, who said he had actually passed out from the heat earlier that day.

The next day was a quick 8 miles down to Cajon Pass, where the I-15 Highway cut across the trail.  As an added bonus there was a McDonalds, a convenience store and a Subway.

At this point it was probably close to 100 degrees, so we all filled our water bottles and then headed under the bridge for 4 hours while the worst of the heat passed. 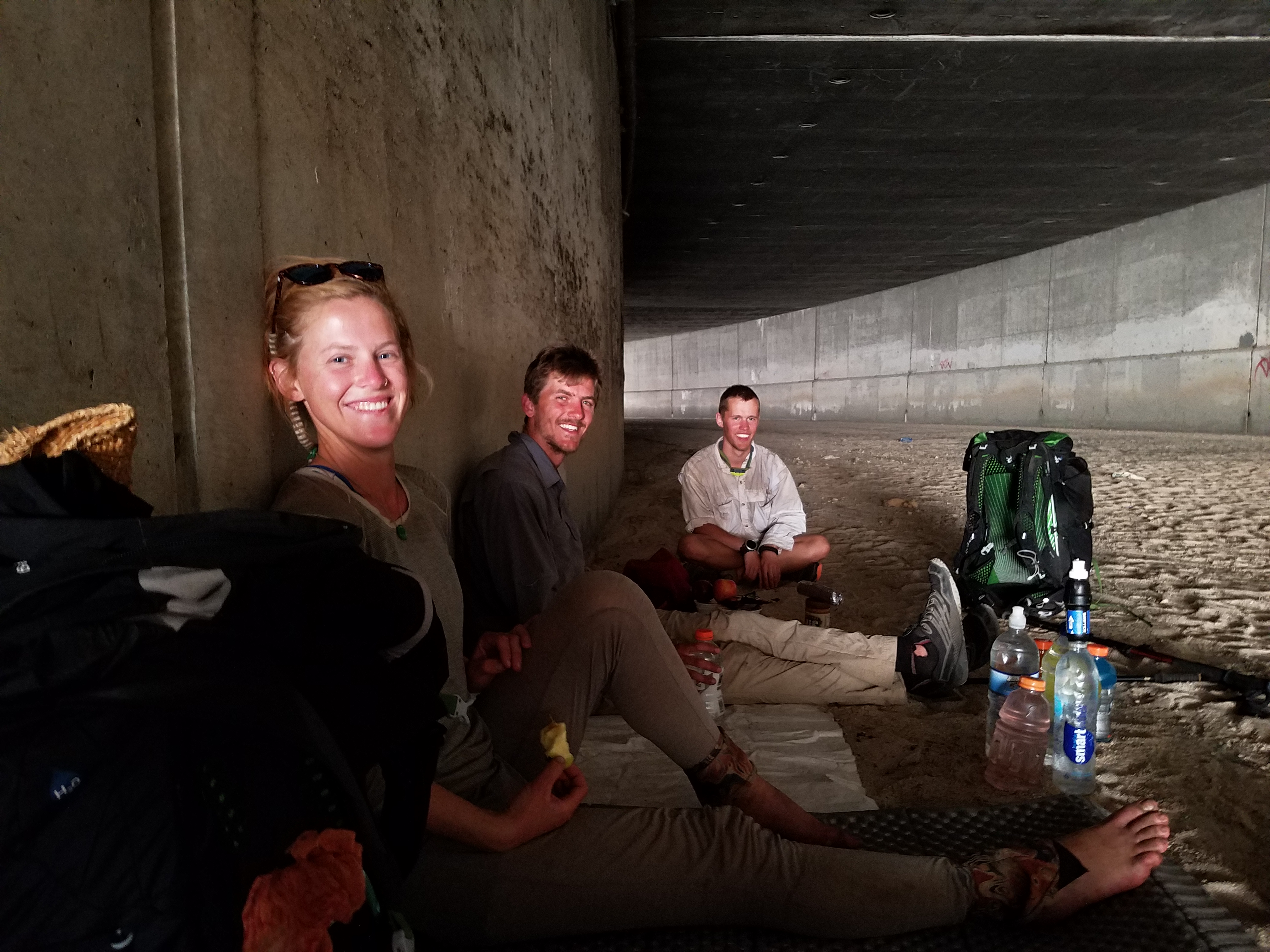 I left at 3 and did another 12 miles and bootleg camped in a small spot just in the burn area on the ridge. Once again Lunch Box and Trailblazer passed me in the dark and pushed on so that the trip here into Wrightwood would be a lot quicker.  Being near civilization was weird.

Wrightwood ended up being a 17-mile day today, which for the last 6 or so miles was terrible, despite the three Aleve that I took.  It didn’t help thast the whole 27 mile stretch from Cajon is waterles – I had packed out 8L, which is damn heavy, especially climbing up to 8400 feet.

There’s something fundamentally wrong with my left foot, not the blister foot (because why not). There was a guy right at the trailhead who hitched me in immediately to Wrightwood and after wandering around for a little bit and getting a chocolate milkshake, I managed to find a fairly expensive hotel room to hide in.  Here I sit eating yogurt and watching The Three Amigos.  I must say though, being completely and utterly clean is wonderful.

I think I am going to hole up here for a few days to see what happens with my new foot problem, and get some bonus healing time in on the other foot.