Hitting the summit of Rocky Peak Ridge on November 17, 2015, I finished all 46 of the Adirondack High Peaks.   24+ years in the making, done.   I can’t believe it, but I’m already planning my next trip – a 5 day traverse of the whole High Peaks region, from Coreys to Elizabethtown.
I arrived at the Ampersand trail head at around noon on Saturday, and immediately was struck by the cold.  I brought both spikes and snowshoes, not knowing what to expect.  The first section of trail was easy, smooth sailing over the frozen mud.  And then the climb began.   I switched to spikes about halfway up. 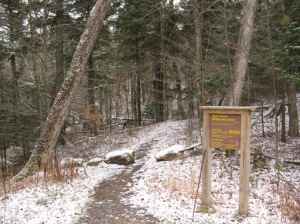 The summit was brutal, I met a bunch of other hikers on the way who didn’t go all the way up.  Wind and fog, rime ice everywhere.

Back down around 3, just enough time to head to the cafe in Lake Placid for a sandwich, then back to the trailhead to camp.   There’s a supposedly pay campsite on the shore of Middle Saranac Lake, but it was off-season.  An easy .6 miles (wearing orange because it’s hunting season, and I found a nice out-of-the-wind spot for the tent.   The wind off the lake was chilly, to say the least. 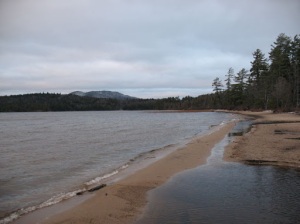 The next morning I drove through Coreys and parked.  Surprisingly, there were people there ahead of me.   The 5.4 miles into Ward Brook Leanto were a cakewalk – frozen trail, beautiful sun on the frozen trees, milder weather, no wind.  Really just perfect hiking. 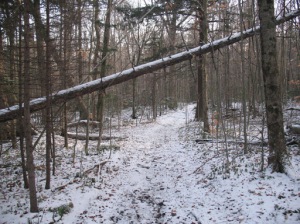 Then the fun began, the ‘trailless’ climb up.   It was mostly obvious, I got turned around only twice.

The ice on the blown out rock slides was vicious, some places an inch thick.  Thank you Microspikes!

Back down, only wiping out once or twice, and back to the car by 4.   At this point I drove back through Lake Placid to the Ausable Inn in Keene Valley for a beer and some dinner.   Then on to Meadows Lane outside the Adirondak Loj, where I tented alone, and in the dark under headlamp.   It’s free camping on DEC land, this time of year totally deserted.  Normally the sites are all taken, as you can’t camp at the Loj.

Parked at the Loj and started in on what might be my last hike for a while.   Mixed emotions when I got to Marcy Dam and remembered how it used to be a beautiful lake.

Up the Van Hoevenberg highway to the ‘unmarked’ trail (complete with sign) to Tabletop.   Hop skip and a jump up, and I was there.    Great weather, little wind, bright sun.  Awesome views.

Back to Indian Falls right around noon for lunch, where again I had mixed emotions.  How many times had I drawn water there, or stopped and rested for lunch?

Back down the highway to the Dam for a long rest in the sun.   By now it was close to 50 degrees, and the trails over the last few days had turned into swamps in the afternoon sun, so the boots were soaked.  Took about an hour rest including a nap on the old dam, while my feet dried.   Sadly saddled up, and took a slow stroll back to the car, right as the temps really started to sink.

A hiker told me “tonight the temperatures are really going to drop” – no way I was camping in the cold again, so I hit the hostel in Keene Valley.   At this time of year it was empty, but they also hadn’t done laundry, and the beds weren’t made.   Weak, for $25, if you ask me.   At night, and on Monday nights especially, the town of Keene Valley essentially closes, so it was a quiet dinner of mac and cheese in the hostel.
Up at 6, on the road by 6:30, I got to the Chapel Pond trailhead for Giant at about 7.

Climbing Giant is like doing a 3 mile stairmaster, it’s 3 miles and 3000 feet up.   That qualifies as ‘steep’ in my book.

Here’s the Washbowl, frozen.  Up, up, more up, some great exposed ledges where the sun was melting the ice, and up some more to the junction.   A sharp right, and you head down a goat path towards Rocky Peak Ridge.   Took a serious wipeout on the way down, as the spikes failed me, and I went head over heels and crashed at the bottom of a rock face.   Ouch.   Pretty icicles though. 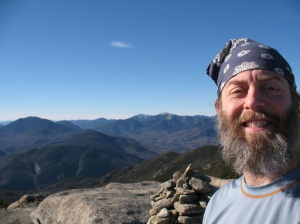 This is why I saved this for last.  This exact scenario.  The view of everything.

On the way down, again skipping Giant (having done it), I took a page from Frost and from Baggins, and took the Roaring Brook Trail down towards St. Huberts.   Much easier, and beautiful hiking through immense pines.   Highly recommended over the Zander trail.   Got to the parking area near St. Huberts at around 3.   5 minutes and 9 cars later, my hiker trash karma kicked in, and I got a hitch back to my car, and then signed out.   At this point, so tired, so hungry.  And by now the sun had dipped behind the peaks, and it was FREEZING.  I had 1 more thing to do on the way to Keene Valley for dinner; there’s a huge waterfall on the road near St. Huberts, but the sun almost never hits it – that is, unless it’s late afternoon.   Perfect timing! 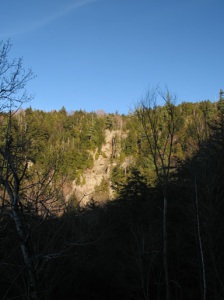 Boy the Adirondacks are beautiful.

Upon the hearth the fire is red,
Beneath the roof there is a bed;
But not yet weary are our feet,
Still round the corner we may meet
A sudden tree or standing stone
That none have seen but we alone.
–Bilbo Baggins

Fall and late Fall hiking are now my favorite time to be up there – despite the cold, you have the trails to yourself, there’s no bugs, and if you catch the weather right, there’s nothing better.

It’s been amazing, boiling water at Lake Colden back when you could have fires there, climbing the Trapdike, doing the Dix Slide as my first trailless peak, finding out after I did it that there was a thing called The Great Range, watching sports and arguing politics with people in the Ausable Inn, and having summit after summit to myself over the years.  A great adventure.