Into and out of Waitsfield, with a long stopover at Three Mountain Coffee. After dillydallying as long as i could, I started walking to theedge of town where the road made an obvious split north. Plus, I feel that hitching from th outskirts of town is less likely to draw the ire of the local constabulary.

A guy hitched me back after a 2 minute wait – and he wasn’t even going up to the Gap! Thanks, Vermont.

This shelter has a great privy, very airy. 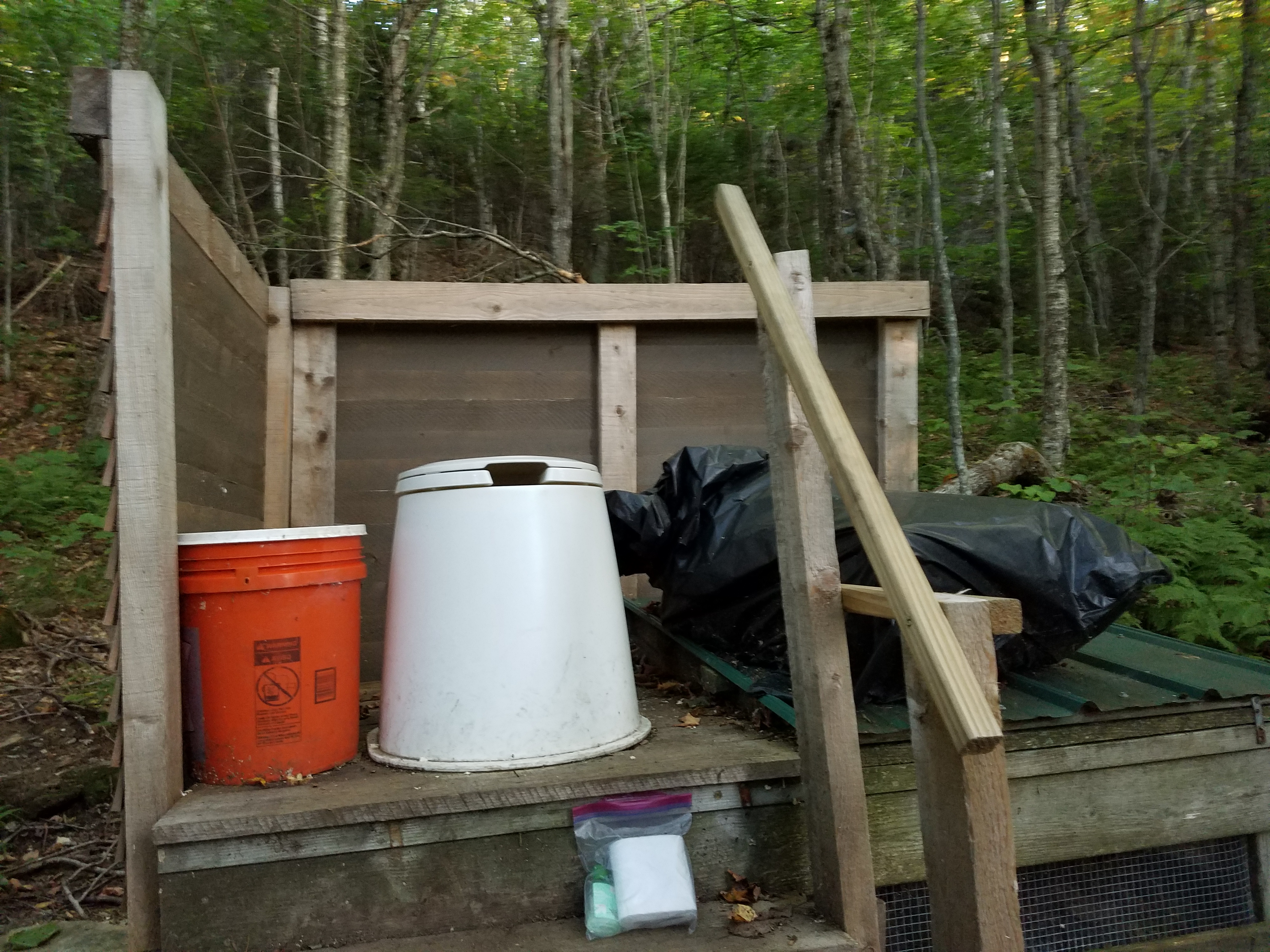 Did the few miles up pretty quickly. I thought I’d have the shelter to myself for a bit, but Kendall, a section hiker, was in a nearby tent platform. Still, it was almost like having it to myself.

Camel’s Hump was epic, let me just start by saying that. The day started on an ominous note, with a warning sign in the shelter telling me the next 5 miles could take 5 hours. After needed rest and some caffeine, I started up the real Shit. After hiking with and talking to some day hikers for a bit, I COMPLETELY BURNED THEM UP TO THE TOP. It was so awesome, not only vintage Smokebeard but vintage 90s All Downhill From Here. Camel’s Hump was worth the 2 hour summit session, although I think I got sunburned. 80+ mile views. Not 100% clear skies, but close enough. Heading down at 2:30, I grabbed some water at a stream, did some cool rock scrambling and made it to Bamforth Ridge Shelter by about 4:45. This shelter has a bear problem, so you need to cook and eat a ways away to keep the food smells out. They also provide bear boxes. Very handy. Shortly after, 2 solo hikers rolled in, ruining my chance at having the shelter to myself. But they’re nice enough people. By 7:40 it was almost totally dark and we were in our bags. And then some dick stomped in at 9pm.

Long easy downhill to the road this morning, followed by a 3 mile walk along the river. It was a beautiful, cool morning, coming high from the clear air down into the fog through some awesome maple old growth forest. Some of the roadwalk was very reminiscent of the Castella roadwalk at PCT 1500. Beat old houses, remnants of things past when the road WAS the highway. The trail routes through some farmland, where I saw some sad turkeys, and got my feet soaked by long grass. 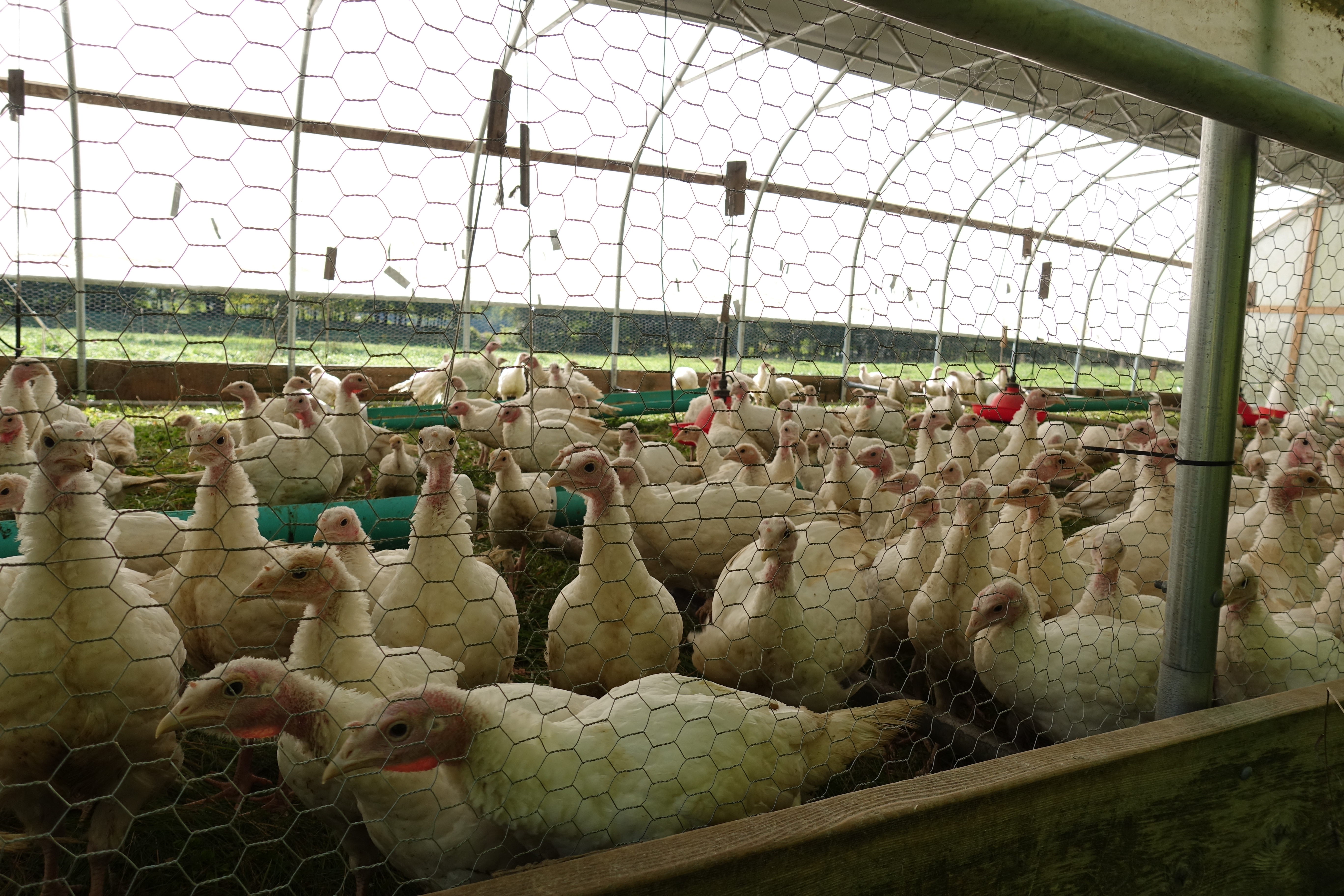 Then there was a cool footbridge. After the highway was a six mile grind up through old growth beach and oak. Hot. My feet were so wet I felt a blister forming so I switched to my Injinjis. I had briefly thought about doing a 19 to the next lodge, but the final 2 miles up Bolton Mountain changed my mind. Met some great people here at Puffer Shelter, 2 women and an awesome dog, and a couple who are also heading North. The late arrival guy also showed up here, but neither I nor anyone else made him super welcome, so he muttered about tenting and left. 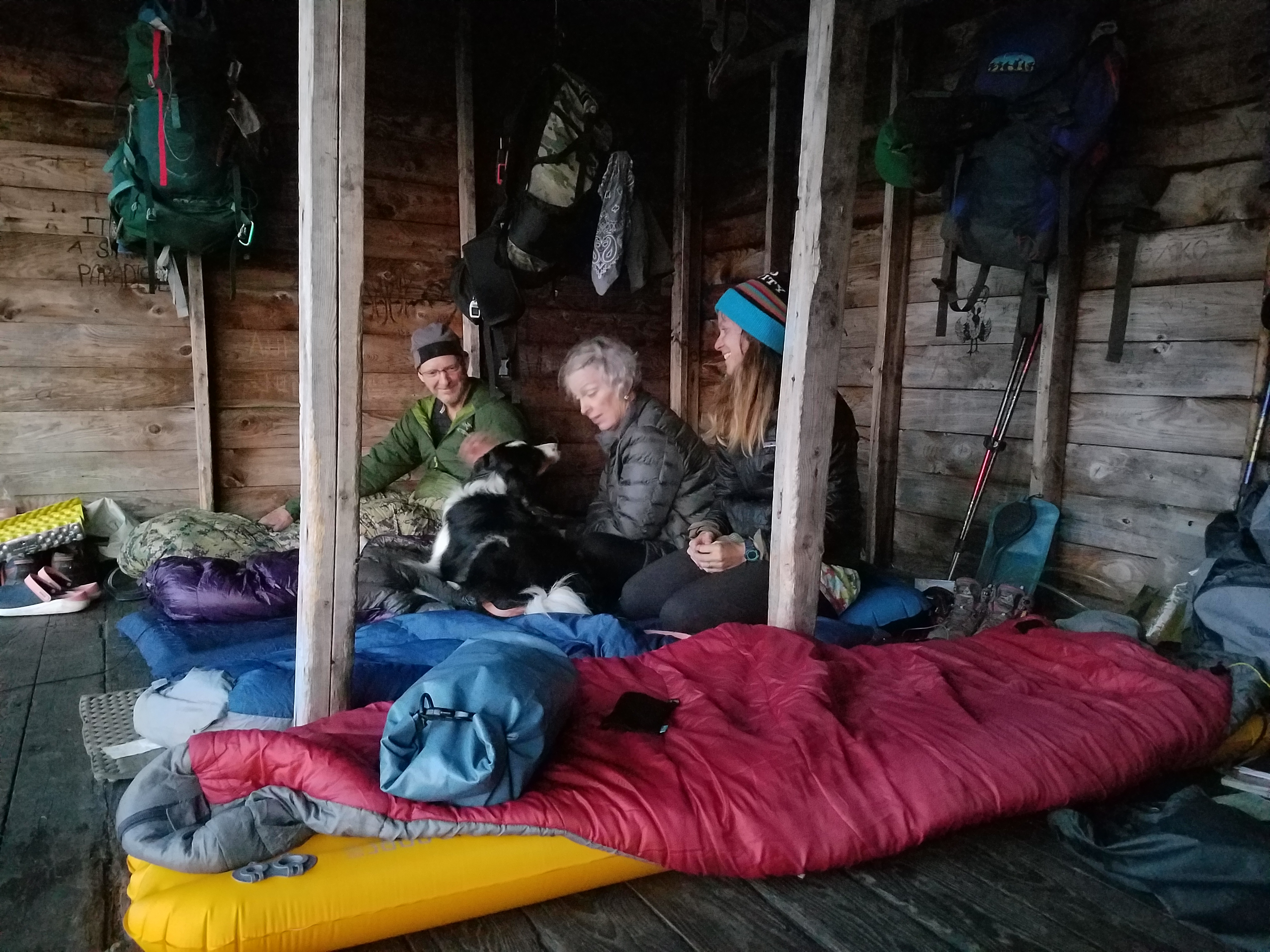 Up and on trail by 7. Two steep hours down to the next shelter, where the water also sucked. Very glad I didnt go for it the previous night. 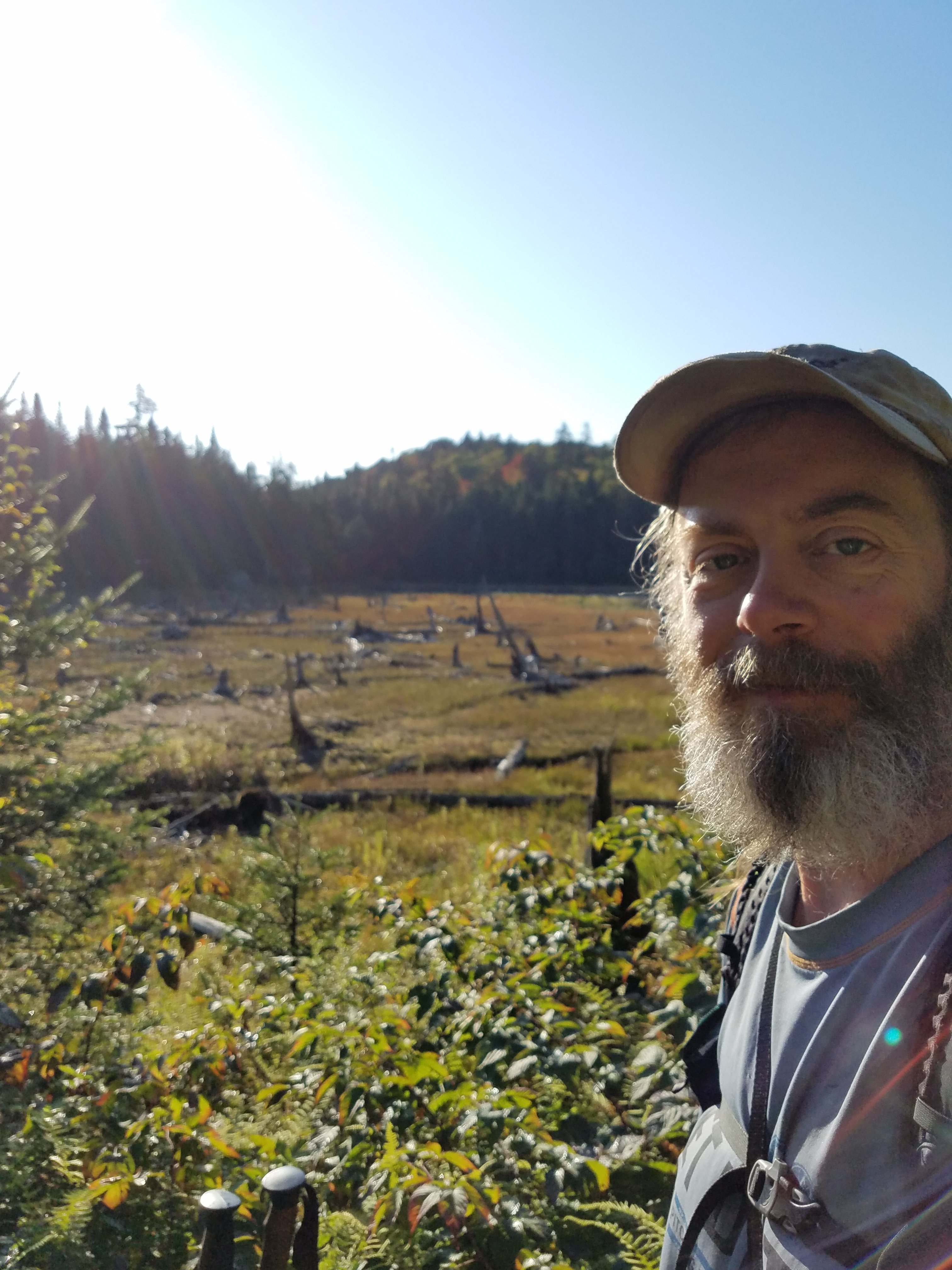 Somewhere near Twin Brook Tenting area, I crossed 200 miles. Hooray. In typical Yankee fashion, there was no sign. Did a few miles of flat, then the big climb up Mansfield, which was packed with over 700 people. On the earlier part, The Forehead, it was wooden ladders and hand-over-hand. At one point I had to help a guy lower his big black lab down a ladder. Not the best dog terrain. 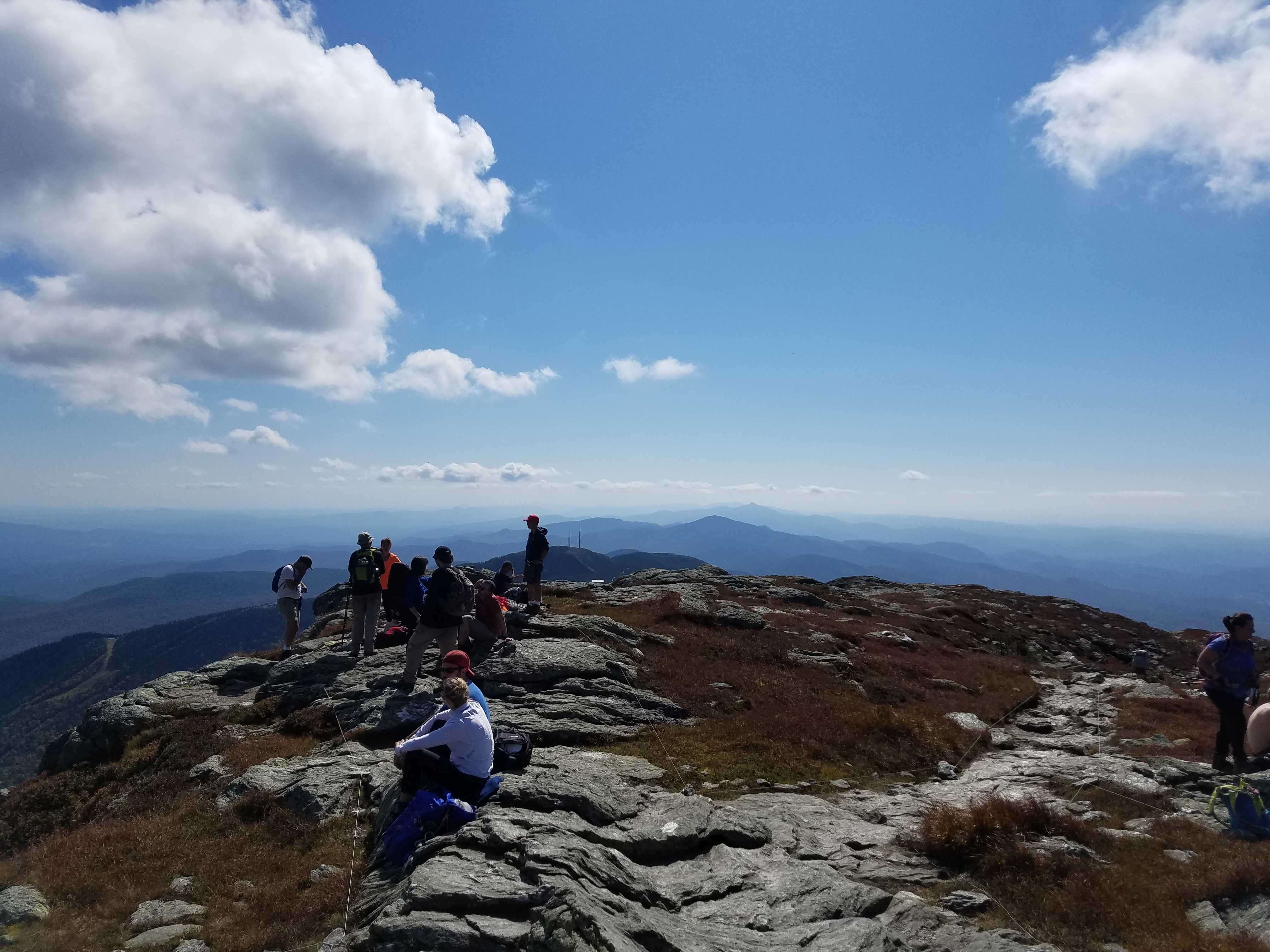 With 2 hours on the summit, and a side trip to the Adam’s Apple, I got to the lodge at just before 4. After a while, 2 SOBOs rolled in, 1 an old grizzled triplecrowner, the other this young hippie chick who shared my fondness of the Adirondacks. Then the caretaker from Mansfield showed up, then 2 more NOBOs, and then 2 overnighters. Before everyone got there I took advantage of decent water and washed up a bit. With the arrival of everyone I ate dinner and started winding it down. There have been no classic dinner circles on this trail. Everyone seems to do their own thing. Once again, sunset = sleep. I only did 13 miles today. I cannot recall needing a zero day this badly in recent memory. I am dog tired today. First it was the 2 mile, nearly 2000 foot descent into the Notch, then the corresponding nearly 2000 foot climb out. Views are worth it. I got some trail magic today too. Two people who volunteer at this historic camp in the Notch took my picture and gave me Pop Tarts. 4 days from the end and the spirit of Trail Magic still lives. Then it was Madonna Peak and then Whiteface, both of whom in the words of a southbound the other day, “are no joke”. And she was not kidding, they where ridiculous. These are legit mountains with little more than a goat path leading up and over. Snokebeard Special at Madonna Peak warming hut. The secret is to put the Fritos IN the sandwich.

I think after Smugglers Notch the Green Mountain Club stops any pretense of this being a casual hiking trail. They even dispense with unnecessary walls. One thing that really struck me today was how nice people are out here. This morning at breakfast I mentioned that I did not want to hike today, that the thought of going down and back up the Notch mshe me despair. Everyone was super supportive and encouraging. The caretaker, Pterodactyl, mentioned that when he got this far north on his LT thruhike, he took a day off, because, “I was fucking tired.” And this from a youngblood. Ran into 2 pairs of SOBOs today, both of whom were chatty about things to come, curious about water, and had good things to share. I had a 5 minute discussion with 1 of them about shoes (we had the same ones). Tomorrow is a 4 mile downhill to the road, then coffee, then cookies, then pizza, then my B&B, which means a shower and laundry. It will be day 10 since both. It been touching 80 the past two days. Every part of me is sticky and smells.

For every vertical, muddy, 80 degree day, Trail Jesus gives you a few miles of this. About 4 miles of woods road to VT 15, some fumbling around direction-wise, a trip to a supposedly iconic hardware store where they take your picture (they didn’t), and a 10 minute hitch later, I’m in Johnson.

Johnson is beat, especially on Mondays. The 1 pizza place is closed. The cafe-with-porch folded 6 months ago. The public library is closed on Mondays. The only thing open for food is a glorified gas station. But they have free WiFi and a killer uplink.

Definitely a Northeast Kingdom vibe, the Jefferson of Vermont. In a massive display of creative irony, some guy had Trump stickers covering rust spots on his truck bumpers, and these: 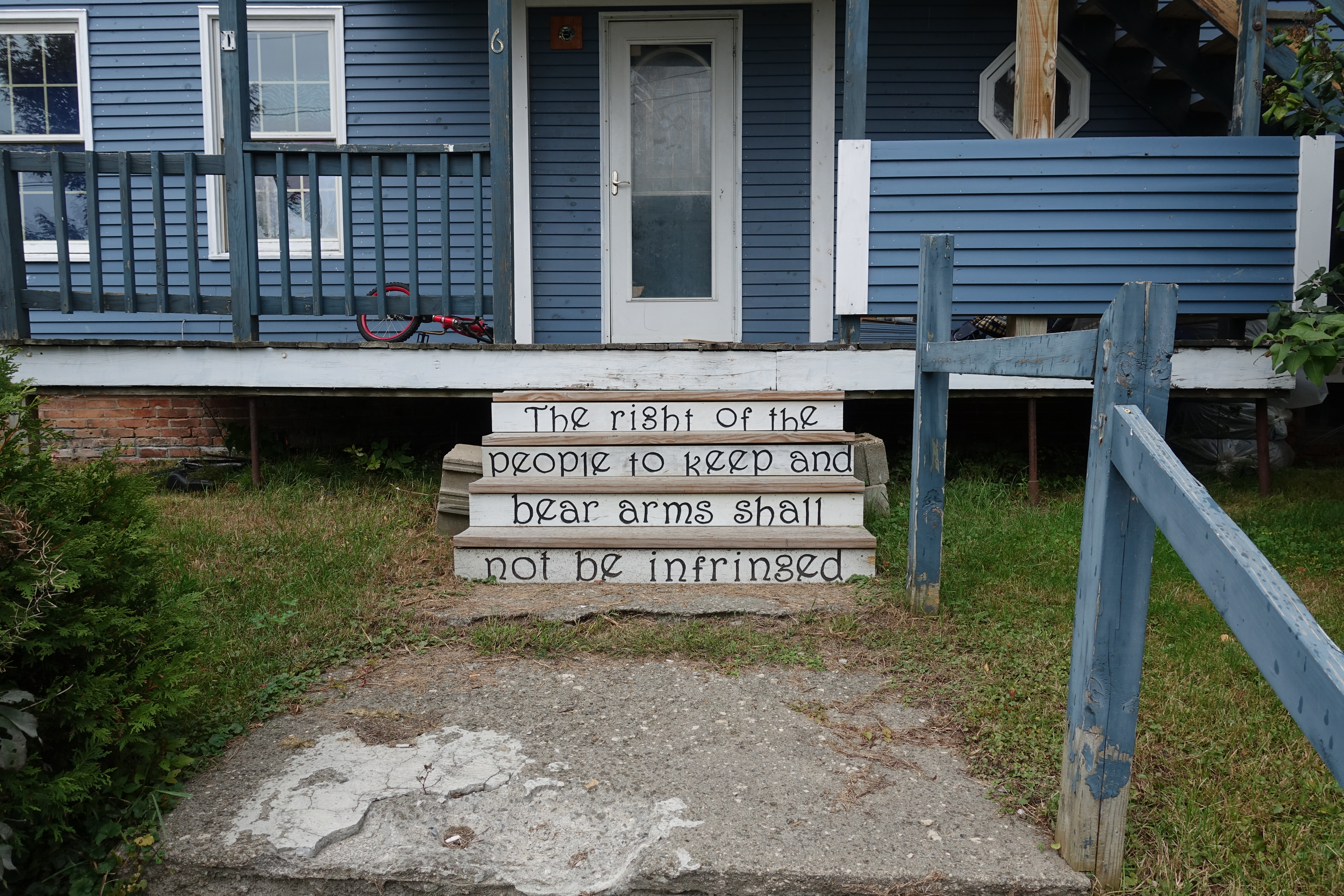 Shower and lunch and icecream and tea, and I feel 100x better.

Tomorrow I’ll be hiking in rain all day, same on Thursday.

And then after that, it gets even better; I still have no concrete plans on how to get home!

Upside down icicle growing up out of the birdbath.

If you didn't eat bananas before, why are you buyi

And this is why you filter the syrup before finish