A repost from the Beeb.   I saw snow on Ben Nevis when I hiked the Great Glen in 1993.  “Neve” snow is the snow that lasts from year to year, and can form a positive feedback loop as it keeps the surrounding area cooler and more reflective (higher albedo), which can lead to the creation of more snow, etc.   I haven’t looked at the relative precipitation levels in Scotland, but it’s fair to say they’re always rainy.   Joking aside, there might be scenarios where warmer temperatures bring disproportionately more snow, which means you get this sort of accumulation. 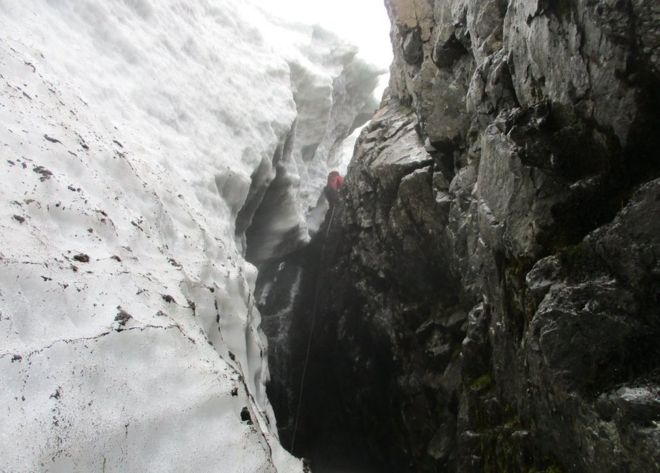 About smokebeard 141 Articles
Smokebeard has hiked the 2652 mile Pacific Crest Trail, the 2160+ mile Appalachian Trail, the 73+ mile Great Glen Cycle Route, all 46 of the Adirondack High Peaks, the 78+ mile Rhode Island North/South Trail, and the Saranac Six. He is also a certified Leave No Trace Trainer. A former MATC Caretaker in the Piazza Rock/Saddleback area, he’s passionate about applying Leave No Trace as an ethical system. His latest adventure was a 3 week thruhike of the 273 mile Long Trail in Vermont.

Fourth of July = no more peas, but all the raspber

Johnny, rosin up your bow and play your fiddle har

Can anyone identify this? Tall and straight hardw

Always time for ice cream. At least the Apocalyps