To celebrate the beginning of Summer, and to take advantage of the long days, I drove up to Massachusetts to knock off a long-held goal of mine, a traverse, and back, of the Blue Hills park.

The Blue Hills are a 7000 acre preserve just outside Boston, in fact, for much of the walking you can hear highways, and sometimes see the city. Depending on the site or map you look at, it’s either a 7.6 mile or 9 mile traverse. Since the path splits halfway through and I took both halves, plus did a little exploring at the western end, I’m calling this a 17 mile day. Highlights of the walk include multiple short but pretty steep rocky scrambles, high red pine forest, oak scrub, shady valleys, a stone observation tower with views of Boston, and a trip to an abandoned section of Interstate 95 that was built, but never connected to anything.

It was great to get back in the swing of things, but I learned three important things, which will come into play on my Long Trail attempt later this year:

That said, I did pass more people than passed me, so it wasn’t too bad. The other thing I learned was that bugs and humidity are terrible. I got so spoiled on the PCT by the lack of humidity that I had kind of forgotten what a hot summer day in New England, only a handful of miles from the ocean, is like. And I don’t like it. Out west the trick is to cover up from the sun and thin air, while letting your clothes wick sweat and cool you. In the East the trick is to expose as much skin as possible while protecting oneself from the bugs.

Another lesson learned is that zero-drop shoes (Altra Lone Peaks) require some training – not breaking in the shoe, per se, but breaking in your calves. It wasn’t too bad at the time, but boy am I paying for it today.

Another thing I noticed on the way is how diverse the group of people were. On the PCT last summer, it was a pretty unidimensional, monochromatic group – lots of young white kids. Thirty minutes from Boston is a very different experience – all ages, all races. Another thing I realized is that nobody, especially the females, looked starving. By Washington most hikers were short on body fat reserves and we all had a bit of a feral look to us.

The trip starts at the east end, where there is parking. Passing through some beautiful lily-covered frog ponds, the trail gradually winds into the woods. The sounds of roads are ever-present for a while. Soon the climbing begins – nothing terribly high in terms of elevation, but steep enough to warrant stone steps. Despite starting at 10:30, I was soon sweating in my Ex Officio bug shirt and pants. I stewed in these full-length clothes all day, hiding from the sun and the bugs.

Two or so miles in you’re on a hilltop with breeze and views, up in the red pines, walking along an old rusty chainlink fence. On the other side of the fence are solar panels and birdhouses placed oddly about. I suspect this is one of those “hush” sites; missle or other coastal defense. About 4 miles in the trail goes through this grove of massive hemlocks, before gradually descending another mile or so through some swamps and coming out at the main Ranger station (where there is water).

I took a break here at mile 6, 1/3 of the way done and already pretty tired. By now it was close to 1pm and the heat was cranking up. I had a bit of a hiker trash yardsale on a picnic table, drink about a liter and a half of water with my lunch, and refilled my bottles.

The 2nd third of the E2E2E is the hard part – easily 2/3 of the work. From the Ranger station you go up and down over 2 significant climbs. Not long, but at around 1000’/mile incline, which is White Mountains territory. You’ll be in 4WD mode trying to find handholds on the rock slabs, and heading downhill is worse – 1 slip and you’re 50 or 100 feet down a very pointy cliff face. As a bonus, the rock is warm to the touch on your hands, and radiating heat into your face while you’re climbing. The big reward of this section is the old observation tower, with its thick stones, perpetual cool shade, and view of Boston.

There’s a weather observatory up here just a few 100 yards away, and then the descent off Great Blue Hill begins. Down, down, down to the highway, taking care to watch your step lest you “bust ass” down the hill. And remember, what goes down, must come back up – all this potential energy wasted. Eventually at the road I found a few sympathetic drivers who stopped traffic for me to continue the next mile or so to the very end. Hooray.

Just past the end of the Skyline Trail, next to the roar of I-95, a herd path leads a little bit farther to some abandoned paved roads. This was supposed to be Interstate 95 and some associated on-ramps, but for some reason, it was never connected. Perhaps left as an emergency runway? Or just nobody wanted to pay to remove it.

Turning around is like hiking a whole other trail. Not only is every hill climb and descent backwards, but the trees and shadows are backwards too. The walk back to the road was enjoyable and shady, and then the gruelling climb up the hill began. It was a fun and tiring scramble.

Mid-afternoon now, the crowds started to thin as I made my way back down. The Skyline Trail splits at the tower, and forms a small loop, so I chose the opposite way back, to get the full experience. After a VERY steep descent, the trail smoothed out nicely. Combined with the lower sun angle and deeper shade in the valleys, it’s a very enjoyable walk. In the mile or so back to the Ranger station, there are two seasonable water sources – IF YOU HAVE A FILTER.

I didn’t see many animals all day, since I was out in the peak heat of the day. There are deer and turkeys, along with plenty of birds and rodents. Supposedly there are also rattlesnakes.

Once back at the Ranger station, it was time for more water, Clif bars, and electrolytes. A few texts home to say I was still alive, and I left for the final 5-6 miles back. While easier, there were still some hard sections in there, this time going up instead of down.

Finally back to the car at around 7:30, where I grabbed a coffee and drove home.

I’ve been coming up to the Blue Hills for over 20 years now, done the End2End twice, been there once with literally 1 other person in subzero (not sub-freezing) temperatures, and gotten turned around and forced to hike back in the dark, but this was my first End2End2End.

Next up – other side trails in the Preserve – there’s an old CCC camp worth exploring, a Nature/Wildlife center, and numerous other trails and loops to explore. 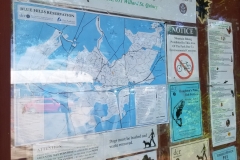 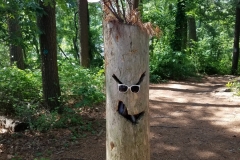 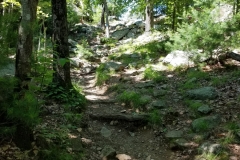 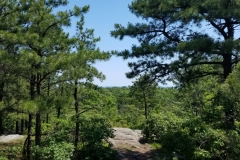 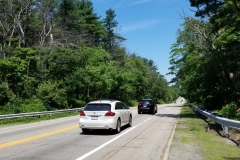 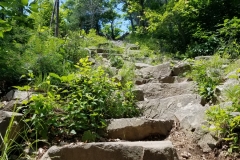 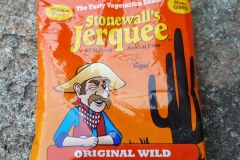